After the 2016 presidential elections, Twitter started getting backlash from the press for allowing a toxic environment on its platform. To stop this, Twitter started to promote the concept of healthy conversations and introduced Shadowbanning by analyzing sentiments in the Tweets.

What is shadow banning?

To be clear, the shadowban is not as bad as getting banned permanently, they both are totally different. Shadowban stops a few functions of your account temporarily when you have done something that Twitter doesn’t like. Banning by shadowban will be so subtle that most people even won’t notice it. Here are the functions that will stop working when your account is shadowbanned.

This ban causes your tweets to be hidden from the search results including hashtags. Your tweets will not be visible irrespective of quality filter turned on or off. Mostly your Tweets will also be not be suggested to many people. Anyhow, this is a temporary ban and occurs quite a lot of times for many people.

This is kind of a lite version to search ban. Your account will be shown in the search normally for the people who interact normally and they don’t find any difference. But for others, your tweets may not be suggested and also cannot find them in search results including hashtags.

This is previously called Thread banning. Anyhow, this ban makes your replies not visible to anyone showing the text “This tweet is unavailable”. If you have seen this message before, it means their account is most probably Ghostbanned. But the main account holder cannot find any of such problems hence signifying the name Ghost Ban.

This is a bit similar to Ghost Ban, but instead of stopping to view the Tweet completely, Reply Debooting hides the replies behind a barrier and only loads them when “Show more replies” is clicked. Sometimes, one or a few of your replies might get into this section, but that doesn’t mean your account is Reply Deboosted. If most of your replies are getting into show more replies section even without any false language or copyright content, then your account might be in the Reply Deboosting Ban.

How to check whether your account is Shadow Banned?

There is a tool called Shadowban.eu where you can provide your username and it shows which shadowban is on your account. Your account might not have any bans on it or may have few bans on it. Or luckily if your account has all the 4 bans, that just means, your account is only visible to you but not for anyone else. Here are a few examples of the test results.

Related: How to Protect and Filter your Twitter DMs 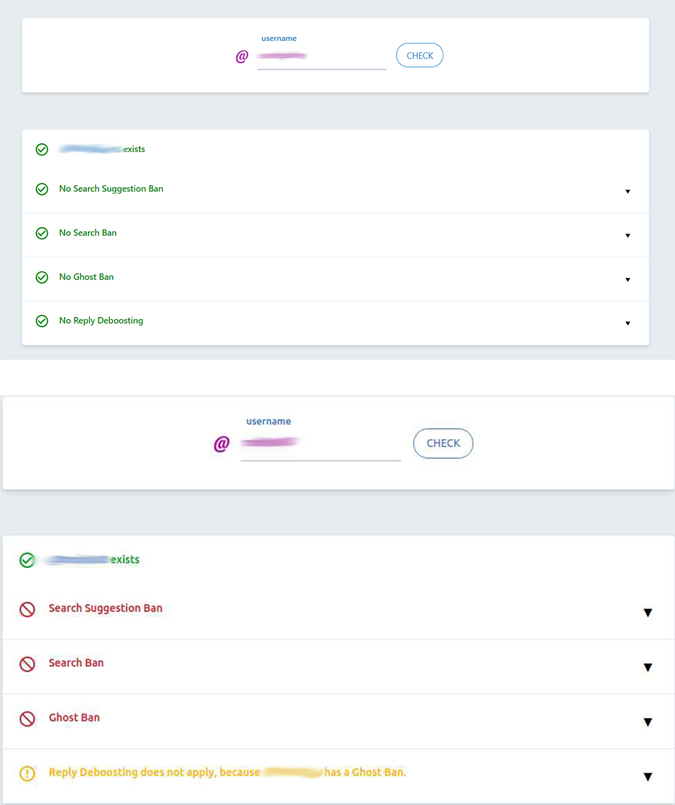 How to Disable/Enable the New Context Menu in...

How to Use WhatsApp on Multiple Devices

How to Unsend an Email in Gmail on...

How to Delete Keyboard History on iPhone