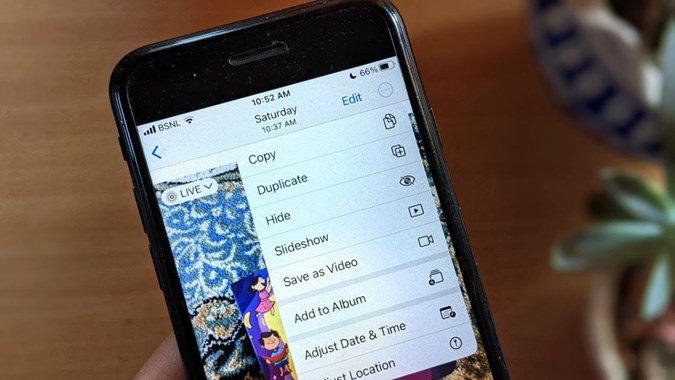 Live photos are animated pictures created by combining the photos captured a few seconds before and after the shutter clicks. You can enable or disable live photos by simply tapping on the Live button in the Camera app. You can even convert live photos to videos or GIFs on your iPhone. Let’s learn how to save a live photo as a video on iPhone having iOS 16 and iOS 15.

How to Save Live Photo as Video on iOS 16

Here are the steps to save a live photo as a video on iOS 16:

1. Launch the Apple Photos app and open the live photo that you want to save as a video.

2. Now, tap on the three-dot icon at the top-right corner and select Save as video from the menu.

That’s it. Your live photo will be saved as a video. The video will appear just after the existing live photo in the Apple Photos app. Once you have converted a live photo into a video, learn how to edit videos using the InShot app.

How to Save Live Photo as Video on iOS 15

Follow these steps to save live photos as videos on iPhones having iOS 15:

1. Launch the Apple Photos app and go to the live photo.

The saved video will show up as a separate video in the Apple Photos app. It will not replace the original Live photo.

How to Convert Multiple Live Photos to Video

The above methods allow you to convert one live photo to a video. If you want to save multiple live photos as video, follow these steps on iOS 15 and 16.

1. Open the Apple Photos app on your iPhone.

3. Press the Select button at the top. Then, tap on the desired photos to select them.

4. Now, to save these multiple live photos as video on iOS 16, tap on the three-dot icon and select Save as video.

On iOS 15, tap on the Share icon and select Save as video from the menu.

Tip: Learn how to change the speed of videos on iPhone.

Bonus: How to Save a Live Photo as GIF on iPhone

To save any live photo as a GIF on iPhone, follow these steps:

1. Open the live photo in the Apple Photos app.

2. Tap on the Live text at the top-left corner. Now, either select Loop or Bounce effect depending on the type of GIF that you want to create. You will see a preview of the GIF when you select any effect.

3. Now, there are two ways to use this GIF. You can either save it or send it directly. To send it in any app, tap on the Share icon at the bottom and choose the app where you want to send the GIF. The live photo will be sent as GIF.

Tap on the Share icon for the Live photo after selecting a Bounce or Loop effect. Choose Save to Files from the share sheet.

5. Select the destination folder where you want to save the GIF.

Tip: To save the GIF to the Apple Photos app, open the GIF in the Files app and tap on the Share icon. Select Save as video. Also, check out the best GIF apps for iPhone.

Can’t Save a Live Photo as a Video? Try These Fixes

If you are unable to save live photos as video on your iPhone, try these two fixes:

You cannot save a live photo as a video if it has any effect like Loop or Bounce added to it. So if Save to video is missing for your live photo, this could be the reason.

If you are still unable to save a live photo as a video, you should try using a shortcut to convert a live photo into a video. Follow these steps:

2. Open the Convert LivePhotos to Video link on your iPhone. Tap on the Get shortcut button followed by Add shortcut.

Once converted, the video will show up in the Apple Photos app. Check out other cools shortcuts that will come in handy on your iPhone.

As you saw above, it’s quite easy to save a live photo to a video on iPhone. Learn how to post iPhone live photos to an Instagram story. Also, know how to make your photos talk on iPhone.