How to Scan QR code from an Image on an iPhone 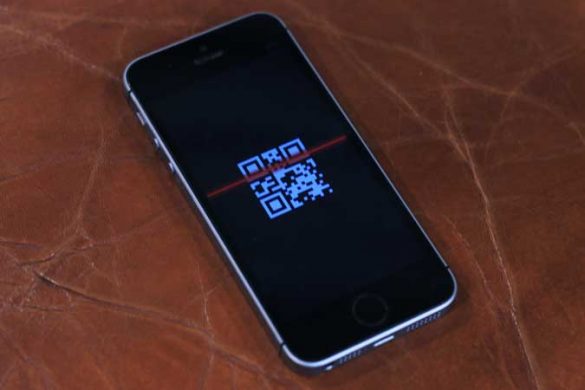 Scanning QR code is easy; you pull out your phone, point the camera towards the code, and voila you just retrieved the information. But, what if you have to scan a QR code stored on your iPhone? Well, pulling out another phone to scan it is one way to go but I have a better way. Let’s check out how to scan QR code from an image on an iPhone.

How to Scan QR code from an Image

iPhone has an inbuilt QR code scanner baked in the Camera app. However, there is no way to read that QR code from photos. Qrafter is a simple app that can scan a QR code from a Photo as well. Start by installing the app on your iPhone. Next, open the app after installation is done and tap “Scan from Photo Albums”. The app also allows you to move and scale an image, this would ensure quicker response time from the app as it won’t have to scan the entire image for the code. 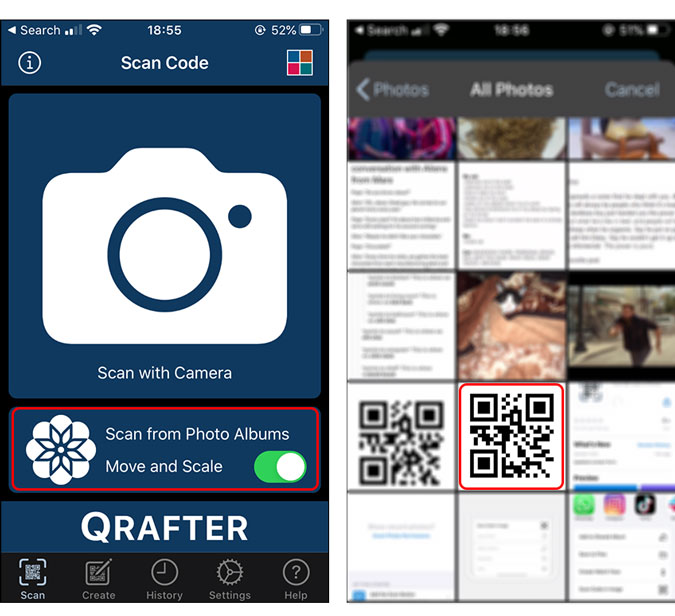 Tap an image that consists of a QR code, and it spits out the information hidden in the QR code. You can then proceed to copy the info to the clipboard, send it via text message or email, etc. 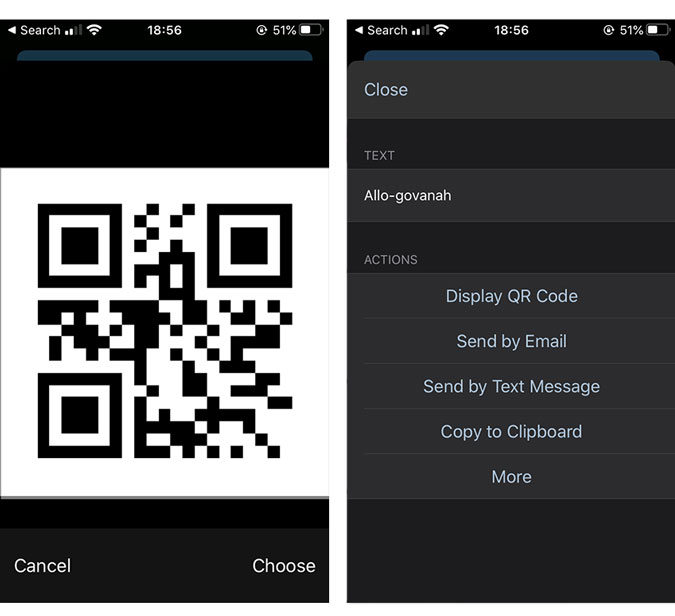 The app is intelligent enough to give you additional options if the QR code has more information than just simple text. For instance, if you scan a QR code with a youtube URL in it, it would give you the option to open the URL, watch the video in the app, send it via email, etc. 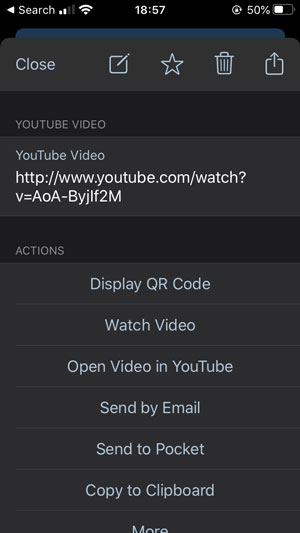 While the app is easy to use, it shows you an ad every time you want to scan a QR code from an image. Also, you have to manually open the photo inside the app to retrieve the information. If you’re going to scan QR code images more frequently, you’ll find the next method more useful.

If you don’t like Google Photos already, here is a solid reason to have it on your iPhone. Google Photos has Google Lens built-in that can recognize objects from any photo, including QR codes. Simply, install the Google Photos app from the App Store. Open the app and grant it access to your Camera Roll. Once you see all the images in the app, open the one with the QR code. 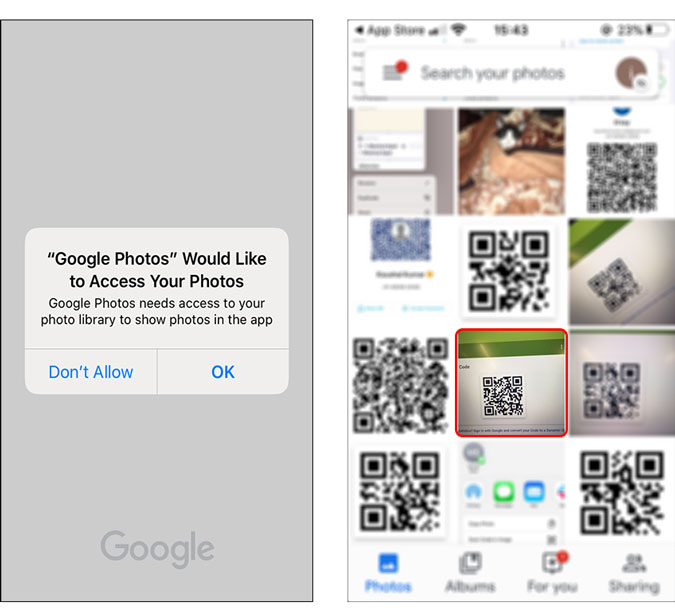 Tap on the Google Lens icon at the bottom. It would take a few seconds to process the image and pop up the relevant information. 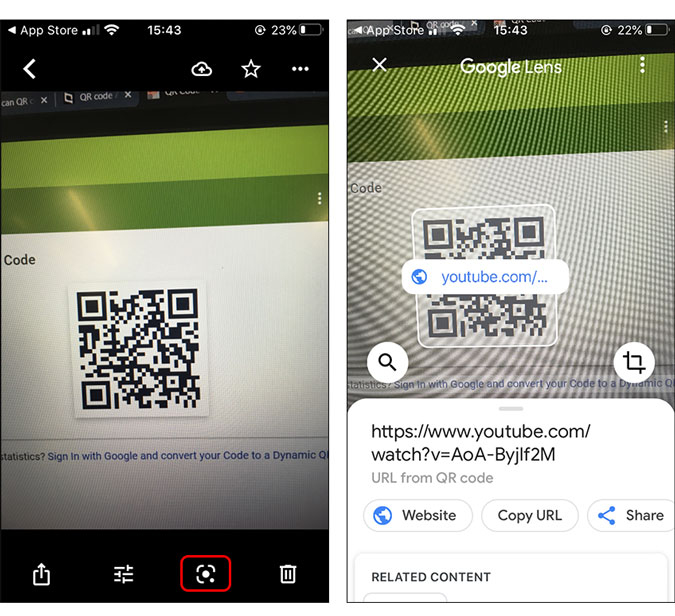 Using Google Photos to scan QR codes is really effortless and you don’t have to worry about ads either. However, using this app has its own drawbacks. For instance, it won’t let you access any of the app features until you log in and it can only scan photos from the Camera Roll. These can be a bummer but don’t worry, the next method would let you scan QR code anywhere on the iPhone.

This method takes advantage of Siri Shortcuts and lets you scan QR code from images. It works even on a web browser which means if you find a QR code online, you can still scan it directly. Start by installing the shortcut from this link.

Once the shortcut is installed, open the Shortcuts app, long-press your shortcut to open the context menu. Select “Details”. 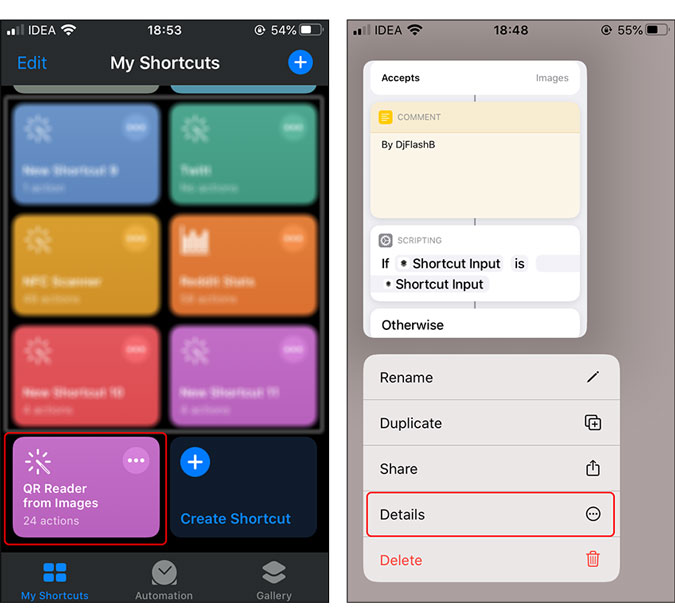 Right now, this shortcut will only show up in the Share Sheet of Images. We’ll expand it to everything so that it would show up in apps like Safari, Files, etc. Select “Share Sheet Types” and tap “Select All”. 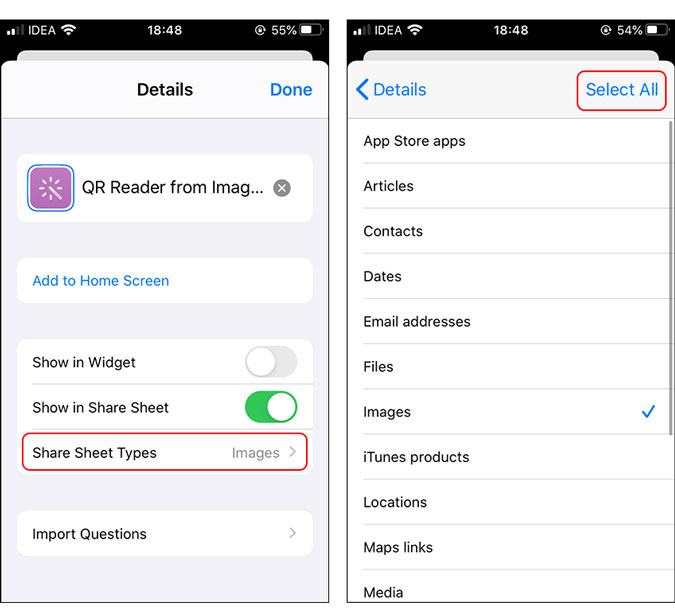 Go back and tap “Done”. That’s all you need to do, you can now scan the QR code image from anywhere on your iPhone. 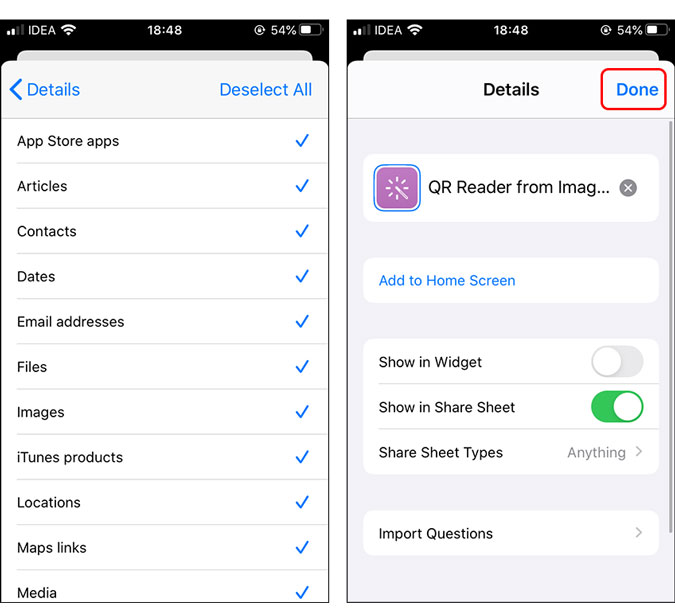 To demonstrate, I opened a QR code in Safari. Long-pressing the image pulls up the Context menu. Tapping the Share button brings the share sheet, select “QR Reader from Images” to begin scanning. 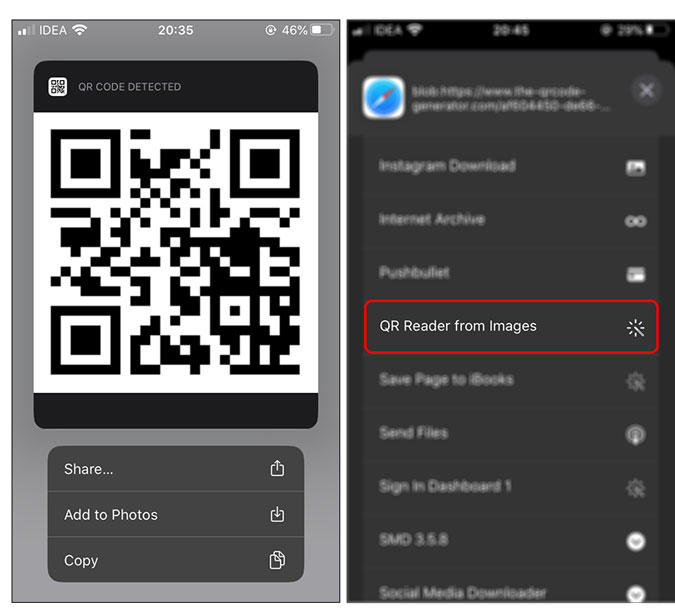 It even works with other apps such as WhatsApp, Photos, Files, etc. I received a QR code from a friend and this is what was in it. Enjoy.

These were some of the quick methods to scan a QR code from an image. While I don’t mind going the extra mile to find solutions to these benign problems, iOS should adapt this functionality as they did with scanning QR code with the Camera app. Even though Safari detects QR code automatically, it doesn’t spit out any information. Well, maybe in the future. What do you think? Do you use a second phone to scan a QR code on your iPhone like a caveman? Let me know in the comments below.