Home » Internet » How to Use Google Docs Offline: Complete Guide

How to Use Google Docs Offline: Complete Guide 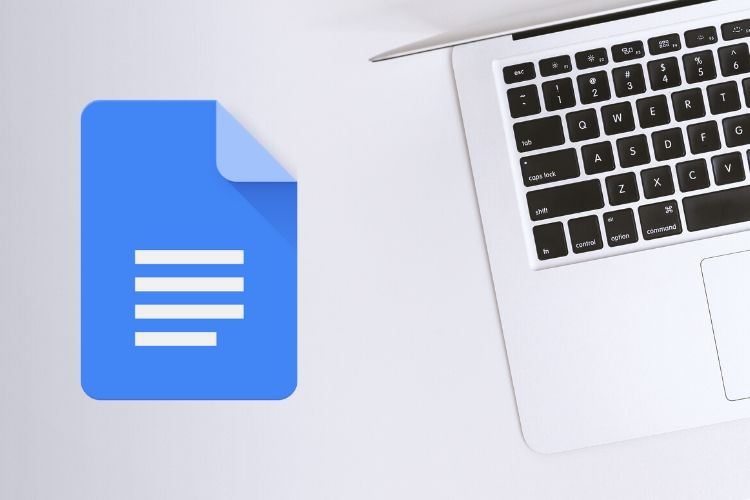 Not as powerful as its counterpart, Microsoft Word, Docs has a couple of tricks up its sleeve like the how typing docs.new in the URL automatically creates a new document. Everything was easy except using Google Docs offline. How to do that?

How to Use Google Docs Offline

The feature should have been available by default across all platforms seeing how Google takes a web-first approach for all its apps. They don’t offer desktop apps. Just web version and mobile apps for Android and iOS. While internet connectivity has improved in recent decades, it is still not available 24×7.

Also Read: How to Download Images from Google Docs

You will need Google Chrome browser or a Chromium-based browser like Microsoft Edge or Brave. That’s because we will be installing an extension called Google Docs Offline that was developed in-house by Google dev team. Wonder why go the extension route and not build the functionality inside Docs app? I mean, you can’t install that extension on your smartphone app, can you?

This means Safari and Firefox users are out and have no other option but to keep an eye out on their internet connection.

Note that while the extension clearly mentions Google Docs in the name itself, it works equally well for other Google apps like Slides, Sheets, and Forms. It’s a classic case of a bad naming policy. I will be using Google Docs only in this example.

I am going to assume that you have already installed the extension by clicking on the Add to Chrome button. You may have to restart your browser once to make it work correctly but usually, that’s not required.

You will see a new option Offline in the pop-up that follows that was previously unavailable. Enable it and click on OK at the bottom to save settings. But wait, you are not done yet.

You won’t have to enable this setting separately for Slides, Sheets, or other Google apps. Doing it in one app will enable it everywhere.

What happens here is that only recently created or edited files will be available for offline editing. Why? Because Google wants to save space locally, that is on your HDD/SSD. If there is an important document that you want to be able to access offline at all times, you will have to enable it manually for that specific document.

Find the document or search for it in the list and click on the three-dot menu icon next to it to toggle on the Available offline option.

There is no way to do this for all or selected documents in bulk. You will have to do it individually for each and every Google Docs file that you want available offline.

Also Read: How to Chat in Google Docs and Why You Should

Most extensions don’t work on Android and iOS smartphones, so how do use Docs or other Google apps offline? Mobile internet works well in cities but they often fail you when you need them the most while traveling and on the road. Fortunately, the same method above works on smartphones too. 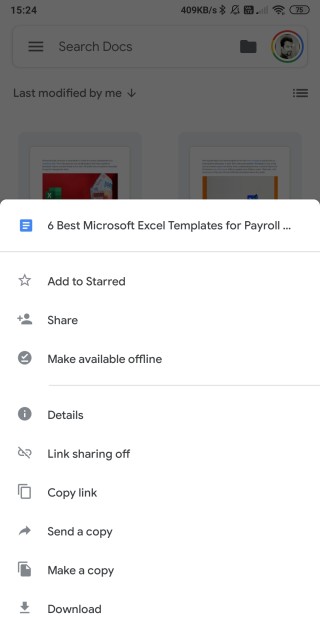 Select the document that you want to work offline and select Make available offline option in the pop-up menu that opens from the bottom of the screen. Files that you have chosen to make offline will have a gray mark on them. 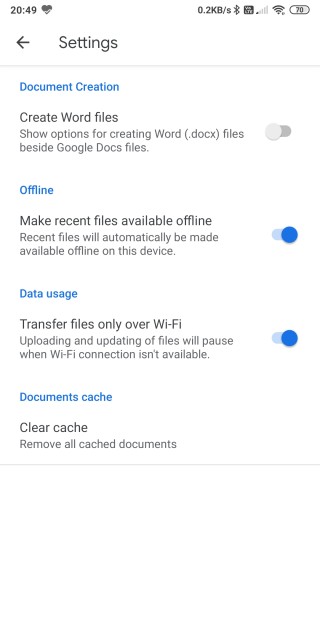 What this setting will do is tell Docs app to enable the offline button for any and all files that you recently opened and edited. You don’t have to manually do it unless it was not accessed recently by you.

What Happens When You Take Documents Offline

When you open the file on your smartphone or desktop, you will see a lightning bolt mark at the top right corner. That means you have opened the offline version of the document and not the online version. Useful to know because if you are working on a shared document, there is a possibility that someone else has updated the document and you are oblivious to the fact. Documents will be updated the next time you are online.

The Google Docs Offline extension works on only one Google account. If you have multiple accounts and switch to the other one, you won’t be able to create or edit documents offline. Following the above steps won’t work as you will be notified that they are already completed.

You can’t upload images because that will require an active internet connection. Google Docs comes with a spell checker to help you write faster and better but it won’t work either in the offline mode. Everything else will work just fine.

I wish Google could have baked and enabled the offline feature by default within Google Docs instead of having to install an extension. The process is easy to follow but users shouldn’t have to. Other than that, works like a charm and is easy to implement once you know it exists. It’s sad that Firefox and Safari users have been left out.

If you have any doubts or suggestions, do let us know in the comments section below and we will do our best to help you out.