15 Best IFTTT Google Home Recipes You Should Try in 2018 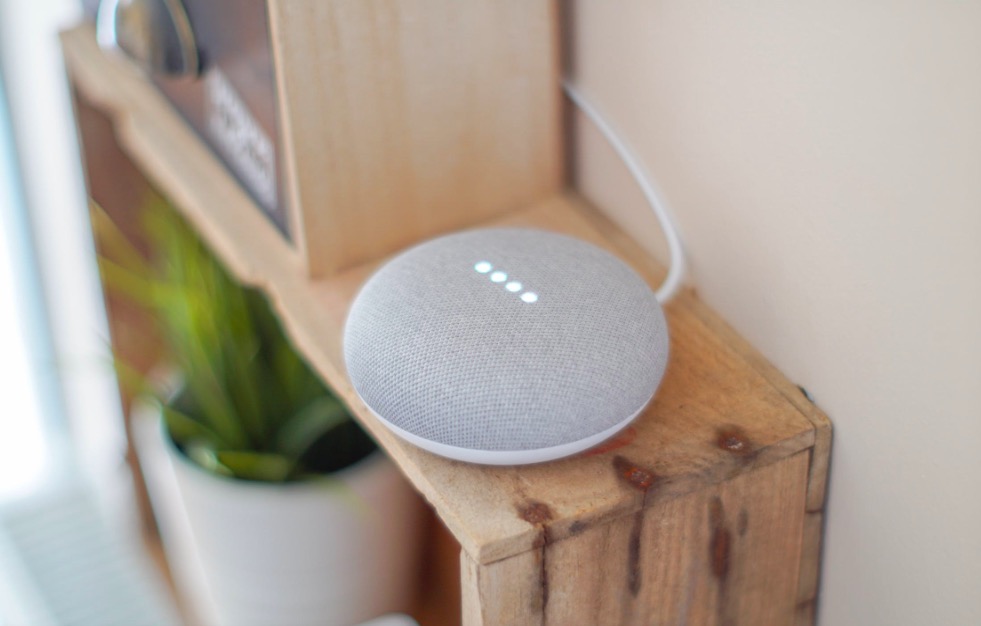 I have a Google Home Mini in my bedroom and I was wondering if I could automate tasks with it. Sure I can use the Routine feature in Google Home, for a simple automation but for a bigger picture, IFTTT is a better solution.

IFTTT (short for If This Then That) is a web-based service which allows you to create a conditional chain of statements. In simple words, consider IFTTT as a messenger between two devices/services. For example, you can set up IFTTT with your Google Home such that, when you say ‘Okay Google, turn on Television’; IFTTT can turn on your Smart TV. Or you can use quirky IFTTT applets (previously called IFTTT recipes) like flashing a smart light every time someone likes your tweet.

Before we get started

To connect you Google Assistant with the IFTTT account, simply go to IFTTT website and log in or create a new account. Once you are in, tap the gear icon on the top right and select Services. Search for Assistant and link it to your Google Assistant’s account. Now you can install an applet and run it just like any native command on your Google Home.

While you can always create your own IFTTT applets, like control Kodi with your Google Home, or let your kids know where are you by broadcasting your location over Google Home. In this article, we’ll take a look at some simple and readymade IFTTT applets that you can install with one-click. Let’s check them out.

I have nephews who have started making a list of Christmas gift and remind me of every single item. The applet creates a new spreadsheet in your Google Drive and everytime you ask Google to save an item it adds that item as a new row. This becomes more fun when the kids themselves ask Google to “Hey Google, send the list of items to Santa”.

You can install this applet and modify the phrases as you like. It would connect your IFTTT account with Drive and you would have to allow access by entering the credentials once. 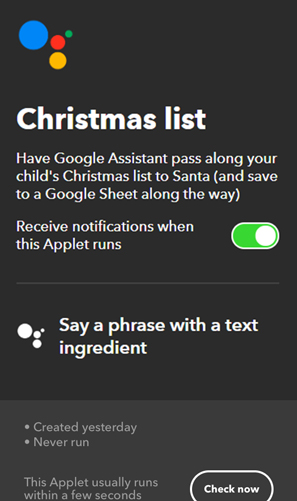 This applet allows you to tweet with just a voice command. Simply say, ‘Okay Google, tweet this —‘ followed by what’s on your mind. It is then uploaded to your Twitter timeline instantly, well almost. If you wish to have a fierce debate on twitter then I would suggest, you stick with the thumbs and use this applet for posting shower thoughts instead.

It would require you to connect your Twitter account to authenticate the connection and it would ask you to enter the credentials while installing the applet. 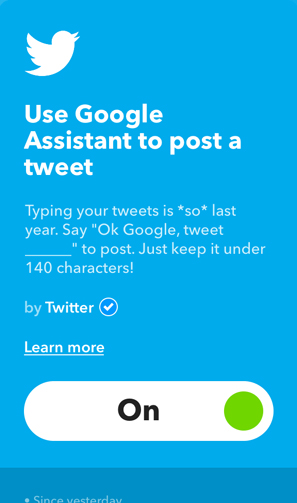 I love star wars and this applet is a fun way to introduce my cat to Darth Vader. Just say, Hey Google, execute order 66 and it is followed by the iconic Darth Vader theme song on my Google Home. You can edit this applet or create entirely new applets. I use a drum roll whenever I need to announce something at home, it’s always fun. 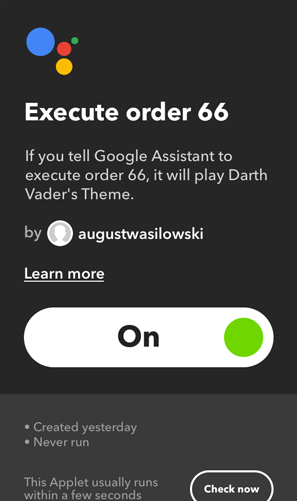 If you are a Slack Power user like me, then this one is for you. With this applet, I can just ask Google to post a slack message on behalf of me using just my voice. For example, if I’m late for the meeting, I can say “Hey Google, tell Slack that I’ll be late for the monthly meeting. Unfortunately, it can not send a Direct message.

Read: 3 Ways To Schedule Slack Messages Like A Boss 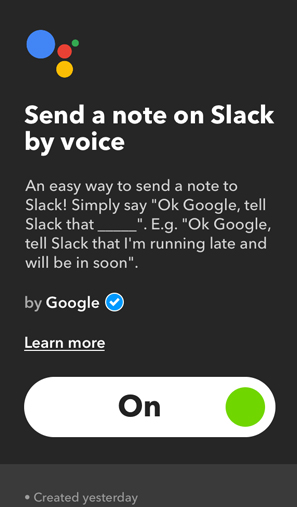 If you don’t like adding contacts on your phone, try this IFTTT applet. Just install this applet and casually ask google ‘Hey Google, Save John to my contacts. The number is 432 555 2398′. This will save the name and the number to your Google contacts. 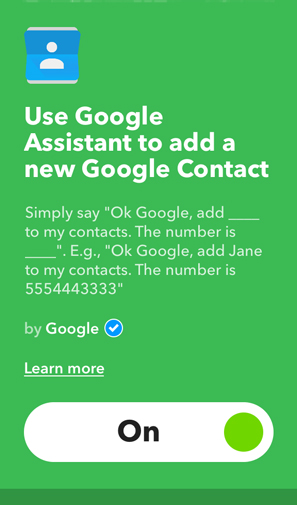 If you have a harmony device you can use it to turn on your TV with a voice command. For example, ‘Hey Google, turn on the bedroom TV‘. You just have to log in and connect your Logitech account with the applet and run it by asking Google home to turn on the TV. It can also be used to turn it off, you would have to install another applet for it. 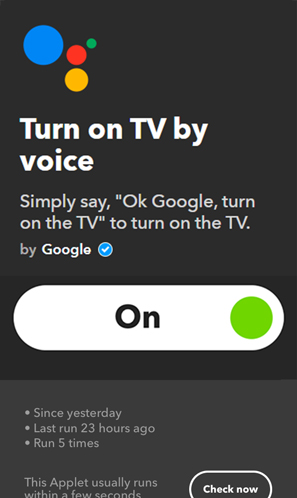 Install Turn TV ON and Turn TV OFF

This applet works with Philips Hue Lights and you can do plenty of actions with IFTTT. For example, ‘Okay Google, turn on the bedroom lights’ to turn off the Hue lights or ‘Hey Google, Good morning‘ to turn it back ON.

To set it up, you will have to connect with a Philips account while installing, and once done, you can just ask Google ‘ OK Google, Bed Time’ and it would run the applet and turn off the lights. There are plenty of other applets available on IFTTT gallery you can visit the website to check them out. 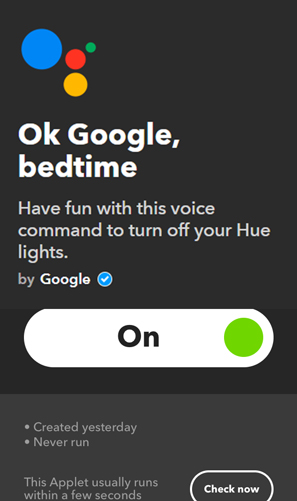 This one is a simple applet for people who use Google Play Music. After installing this applet, I just have to say “ OK Google, Music” and it opens up the default music player from my Phone and starts playing the song and It can also cast the audio to the smart speaker and enjoy the louder music on my Home. 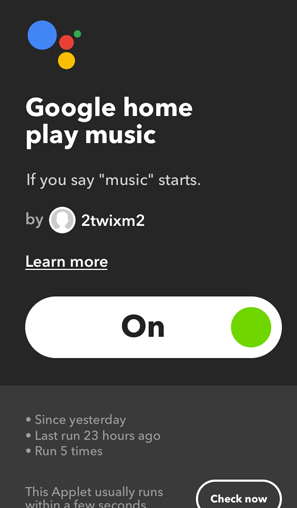 9. Add an event to Google Calendar

Adding events to your Google Calendar just got easier. Install this applet and connect your Google account with it, you can then ask Google ‘Hey Google, create an event’ followed by the title of the event, it would automatically create an event after confirming the date and time first. 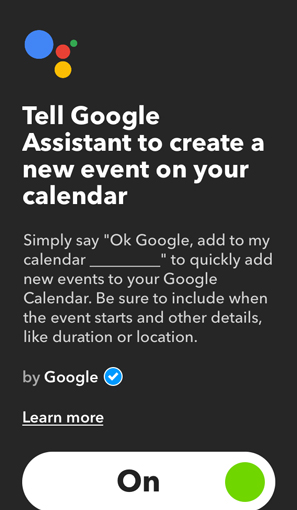 Ask Google for directions to a place, for example, ‘Hey Google, send direction to City Hall to my phone‘ and it will open Maps on your Phone with the direction from your current location. Although, due to iOS restrictions, it only works on Android phones. 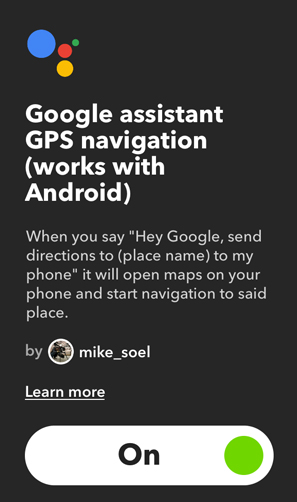 Study mode activates the silent mode on your phone, so you can focus on more important things. To turn on the study mode, install the applet and ask Google Home ‘ Ok Google, Study mode’, it turns your phone silent. I can add additional phrases ‘ Activate do not disturb mode’, and ‘put the phone away’ to make it seem more natural. 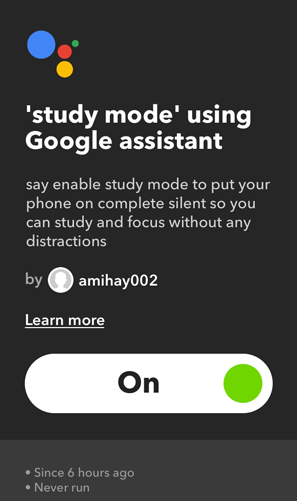 12. Create a reminder on iPhone 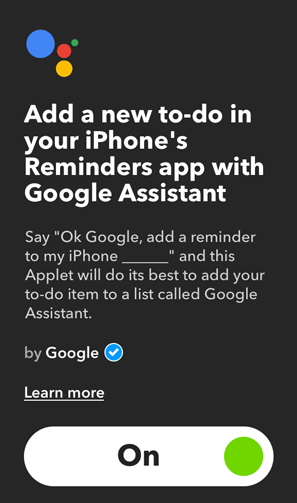 13. Create a voice note on Evernote

You can use this applet to add notes to Evernote with a voice command. This applet requires access to your Evernote account to function and after giving it access I can use my Google Home and enter all the shower thoughts without reaching out for my phone. For example, Hey Google, create a note of fundraiser meeting next Monday. 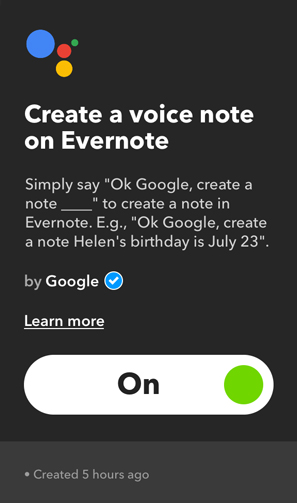 This is the modified version of the Christmas List we listed above. You can use existing API and services in creative ways and create your own IFTTT recipes. This applet, for example, connects with your Google Sheets and adds a new row everytime you invoke the applet through Google Home. You can use this applet in a number of ways, for example, ‘Hey Google, add a towel to my Shopping list’. 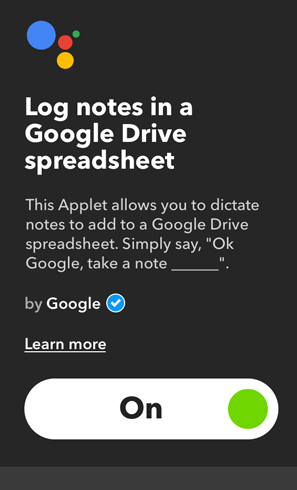 15. Block Next Hour on Google Calendar

This applet is for people who use Google Calendar for making appointments. Sometimes your calendar can be full and you just need an hour or two just for yourself. Once you set it up, you just have to say, ‘Hey Google, block next hour‘. This will fill the next hour with an entry busy and no other events would be allocated to that hour. 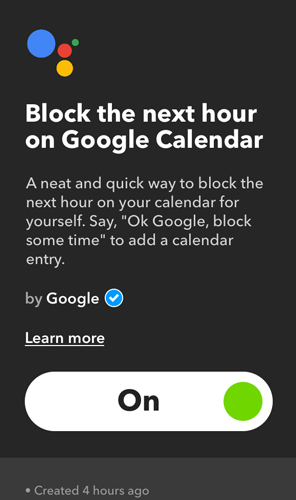 IFTTT is powerful in itself and the best part about it is the easy User Interface. It only has two parts, therefore, anyone can create their custom Applets. I use a drum roll applet with my Google Home and it took me two minutes to create. These applets are a segue into automation and you can find creative solutions to the problems. Tell us which applets are your favorites or if you have created one share it with us.