Best Mi Band 5 Apps, Tips & Tricks To Use It Like A Pro 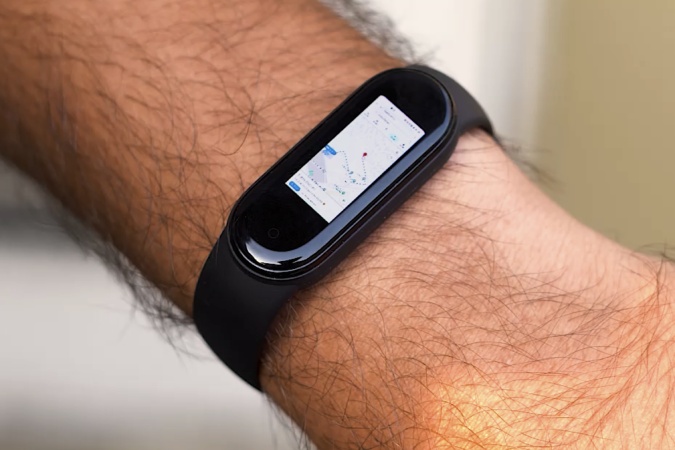 The Mi Band 5 recently launched in India with a slightly bigger 1.1-inch AMOLED display compared to the 0.95-inch OLED screen on the Mi Band 4. Other new features include an activity fitness tracker, magnetic charging, women’s health features like menstrual tracking, etc. However, the strengths of Xiaomi bands have been the huge third-party developer support. The latest successor, Mi Band 5 also enjoys the same. You can display map directions, mirror screen your phone, sync data to Strava, pick up calls, design watch faces, and much more.

So, let’s see some of the best Mi Band 5 third-party apps, watch faces, tips and tricks. 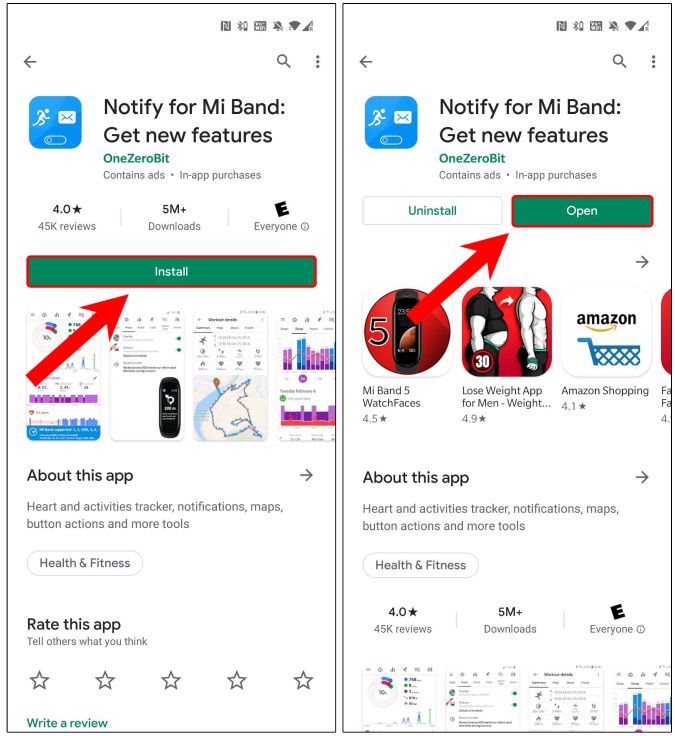 When you first open the app, it’ll throw a pop-up for location permission. Just tap on “Allow while using“. Next, it’ll detect the list of connected bands with the Mi Fit app and ask you to pair it with the device. In our case, it’s the Mi Smart Band 5. Hence, select Mi Band 5 and tap on the “Pair” button. 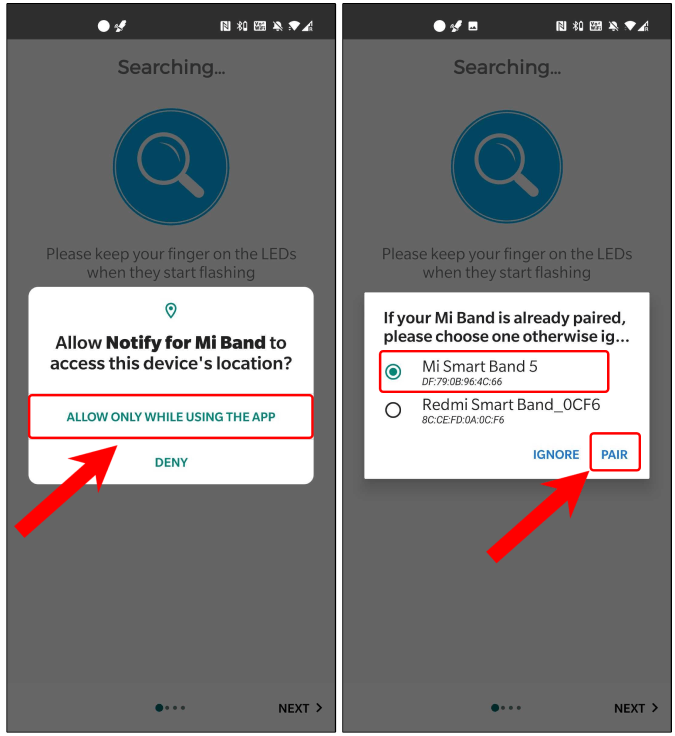 Further, the steps are quite explanatory, and make sure you provide appropriate permission as required. Also, make sure you exempt the app from “Battery Optimisation” for it functions properly. With that out, let’s start with the tips and tricks.

Similar to other fitness bands, the Mi Band 5 can also display calls ID on the band. However, it doesn’t provide you the option to accept phone calls since the Mi Band 5 doesn’t have a built-in microphone or speaker. Turns out there is a workaround to accept calls with your Mi Band 5 and take calls on your Bluetooth earphones connected to the phone.

To get started, head over to the Notify for Mi Band app that we downloaded before. Tap on the Gear icon at the top-right corner to go to the band settings. Next, tap on the “Call Actions” button within the Button section. 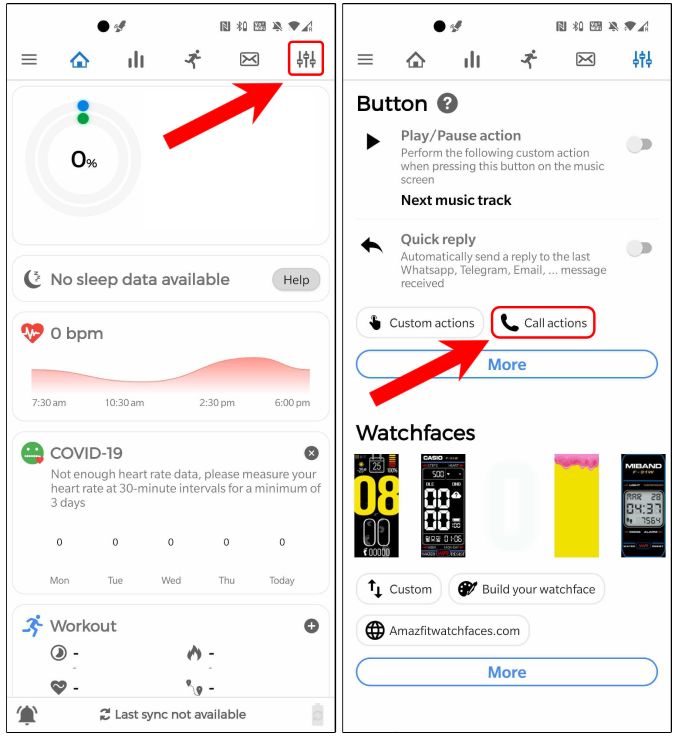 Within the Call Actions menu, tap on “Ignore call” to remap the Mute option. From the pop-up, select “Answer a call” and tap on the “OK” button. 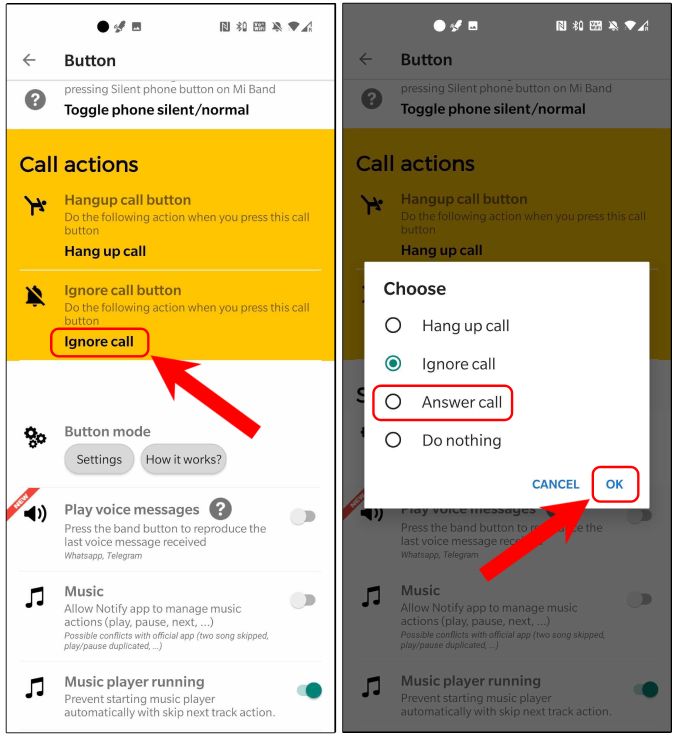 Further, you will be prompted for Contacts, Phone, and Call Log permission, just tap on “Allow“. Once done, the Mute button on the Mi Band 5 will be mapped to accept calls.

In order to set it up, head over to the Settings tab of the Notify for Mi Band app. On the Settings tab, scroll down to the bottom and tap on the “More” button under the Tools section. 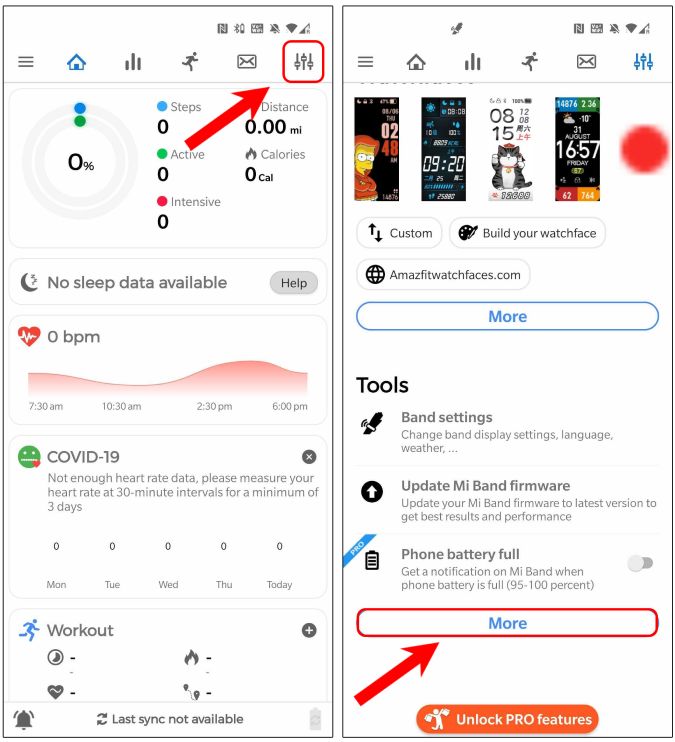 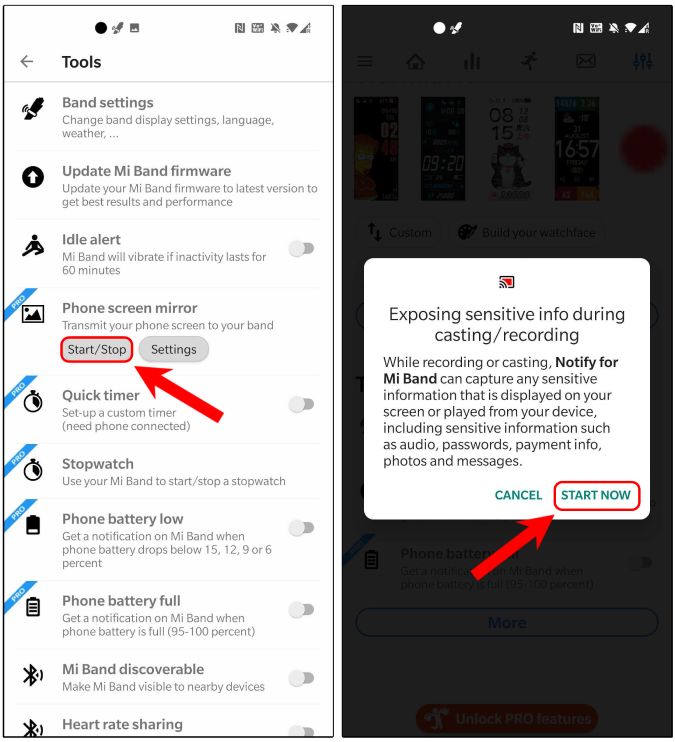 Now, the app will start mirroring your Android screen to the Mi Band within a 30-second interval. Once you open the Google Maps direction, the directions will also be synced to the band. However, there’s a major drawback with this method. It does not work when you turn off the Android display.

In order to overcome that, just manually stop screencasting from the Notification shade once the Google Maps direction page is synced.

3. Set your own image as wallpaper

The previous-gen, Mi Band 4 allowed you to set third-party watch faces with apps like Amazfaces. But, now with the Mi Band 5, you have the option to create your own watch face directly from the Mi Fit app. To do that, head over to the official Mi Fit app and navigate to the “Profile” tab. Next, tap on the “Mi Smart Band 5” option under the “My Devices” tab. 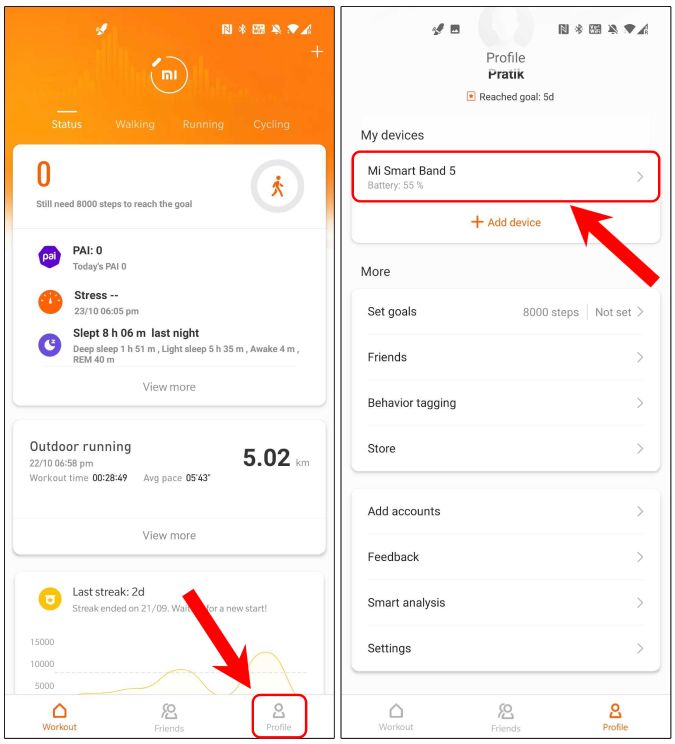 Under Mi Smart Band 5, tap on the “Store” option to get to the watch face store. Within the store, tap on any of the watch faces with the “Custom..” name tag. 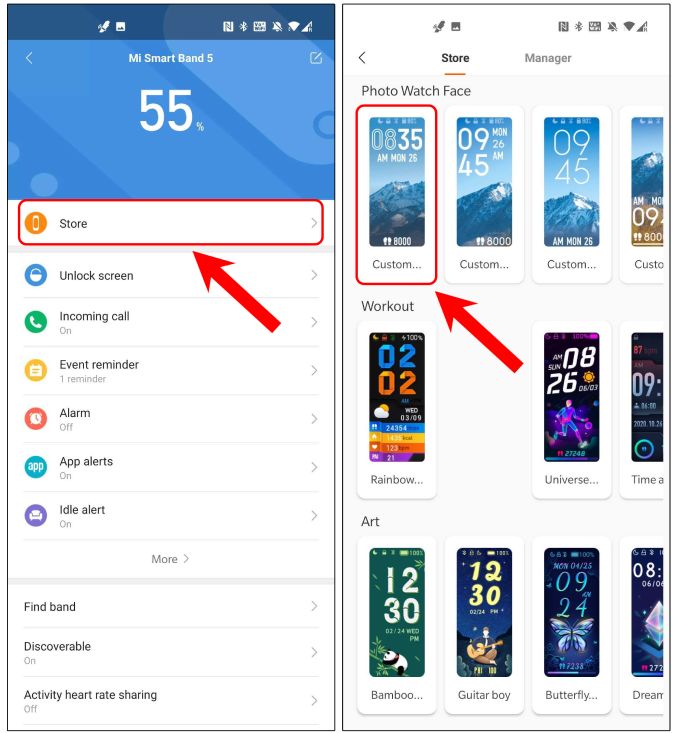 Under the custom dial option, you will have the option to upload a custom background. You can select any picture from your gallery, crop it, and adjust it accordingly. 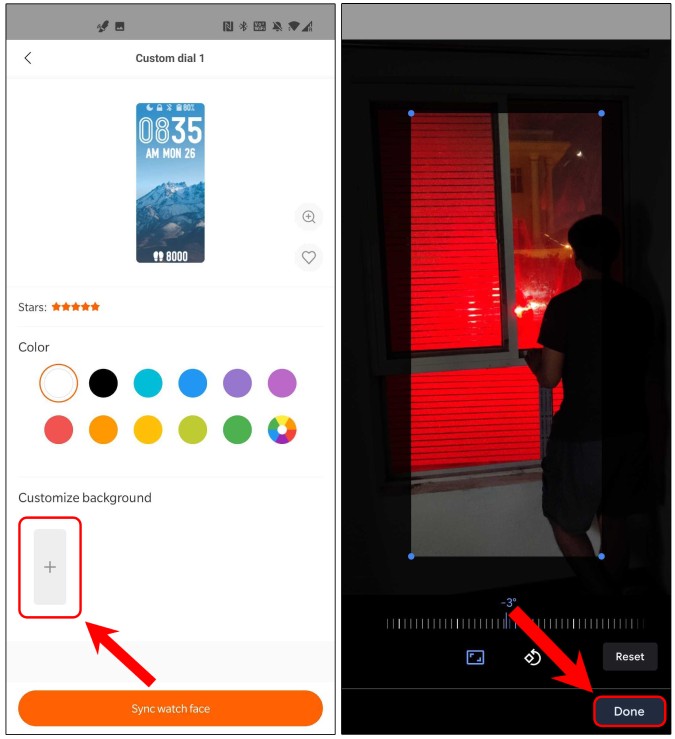 Once done, you will have to “Sync watch face” from the mobile app to the Mi Band 5. 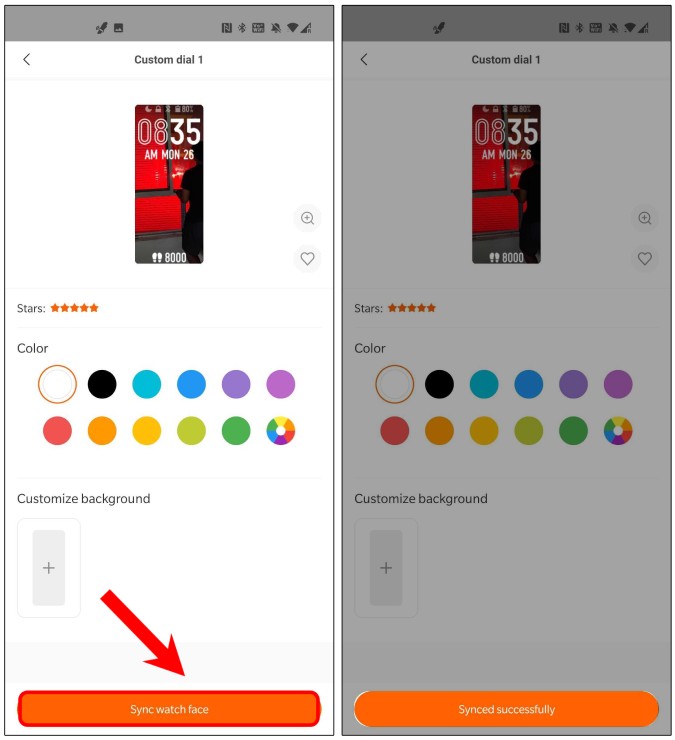 Another useful feature of Notify for Mi Band app is the ability to customize any touch action on the Mi Band 5 (pro feature). I use this feature to modify the “Play/Pause” button of the music control on the Mi Band 5 to make a call. This only works when music is not playing on the phone. It’s a quick trick to have an SOS or speed dial to your phone contacts. 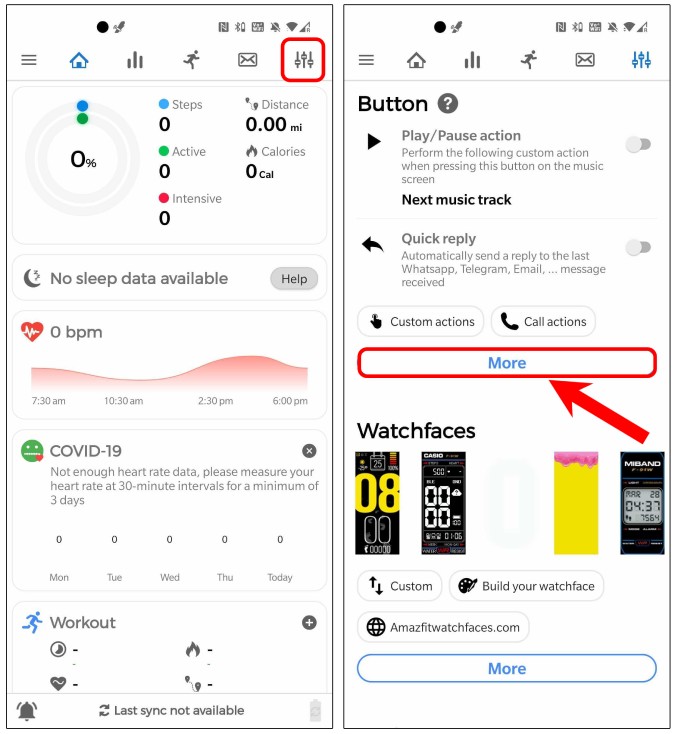 Under the Button section, the first option is “Play/Pause action“. This option lets you set a custom action for the Mi Band 5’s music control. Tap on the “Play/Stop music” option just below the action. It’ll throw a pop-up to select the action. Navigate and select “Make a Call” and tap on the “OK” button. 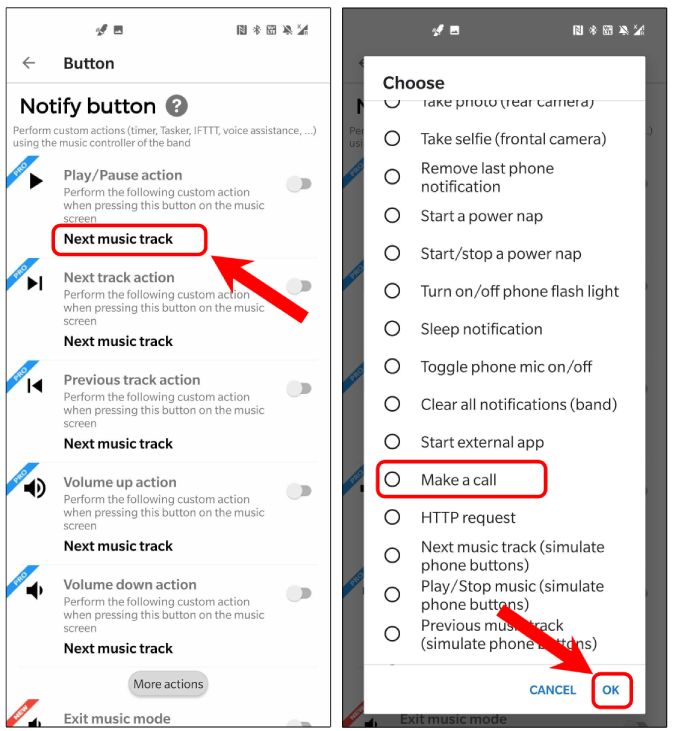 Next, we need to select a contact that we want to keep on speed dial. To do that, tap on the “Settings” button below the “Make a call” label. It’ll open your contacts list, select a contact just by tapping on the name. 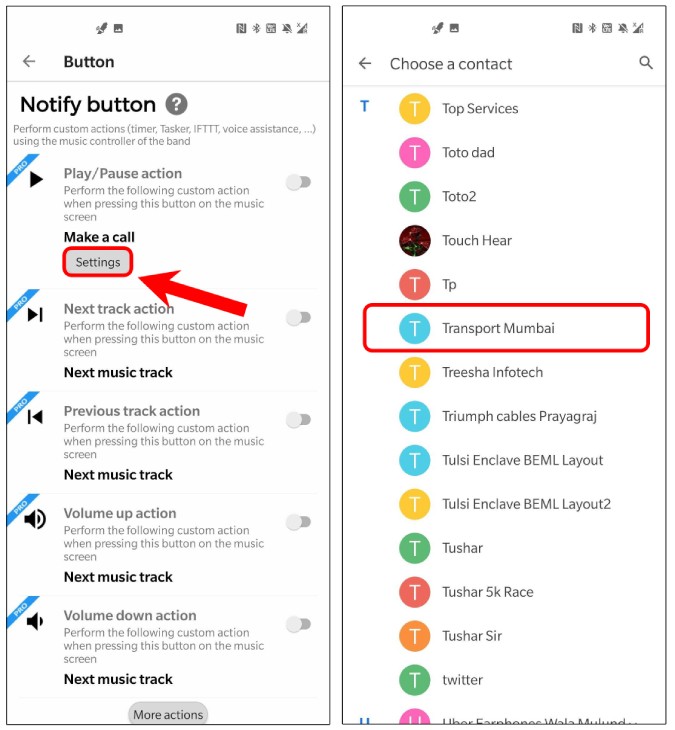 Next, make sure the toggle beside “Play/Pause action” is turned on. Additionally, turn on the “Music” toggle at the bottom of the Settings tab to ensure that the Notify for Mi Band controls the music playback. 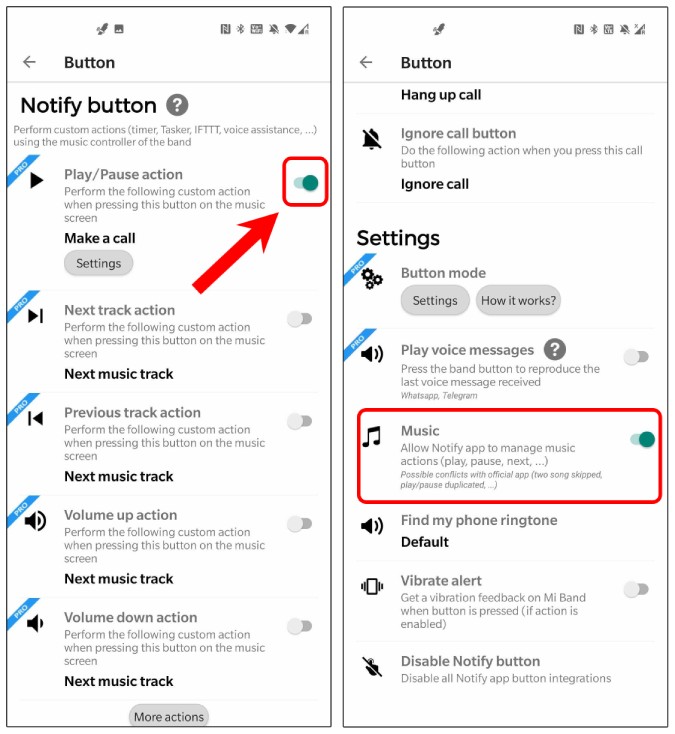 The only caveat with this feature is that it doesn’t work when the Notify for Mi Band app is in the background. You have to keep the app in the foreground or at least make sure that the app is open when you lock your phone.

The Mi Fit cannot sync to any other app except Google Fit. So, in case, you use apps like Strava, you would have to record your workout at both the places separately. However, there’s a quick hack that will make the Mi Band 5 sync automatically with the Strava app.  For an in-depth tutorial, you can read our detailed article on how to sync the Mi Band 5 with Strava but here’s a brief summary of the steps.

Post this setup, every workout that you sync with the Mi Fit app will be uploaded to Strava. You can even uninstall the Zepp app and this bond will still work. In order to stop uploading to the Strava app, you will have to unlink your Strava account from the Mi ID within the Zepp app.

I have always liked Honor Band 5’s smart alarm feature. It basically triggers the alarm based on your sleep stage. For instance, if you set up an alarm for 07:30 AM. The band will start monitoring your sleep 30 minutes prior to the alarm time i.e. 07:00 AM. In case you are in light sleep, it’ll trigger the alarm even before 07:30 AM.

You can get the exact same feature on the Mi Band 5 via the same Notify for Mi Band app. Head over to the “Message” section of the Notify app. You will find alarm presets under the Alarms section. 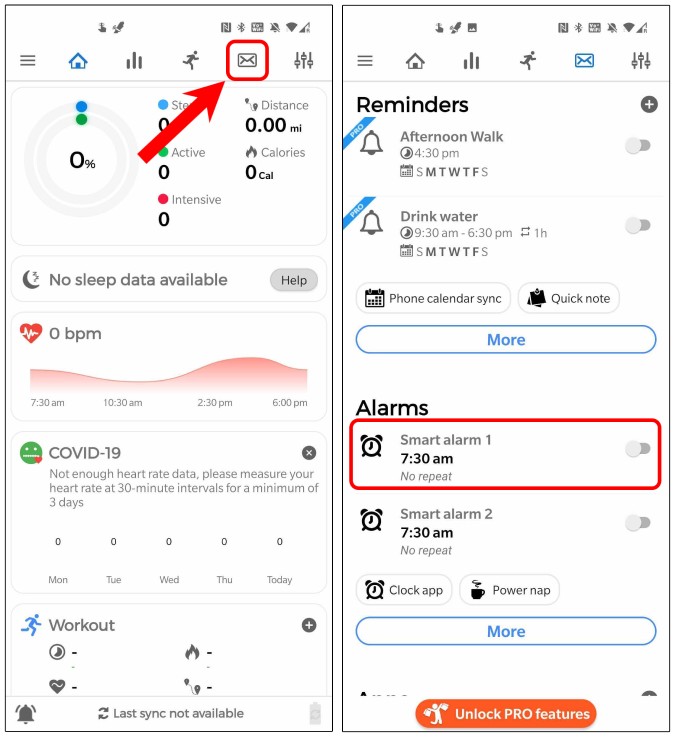 Turn on the toggle beside the alarm. Once done, tap on the Alarm and you’ll find the “Early bird alarm – Notify” option. Turn it on to start smart alarm functionality. By default, this smart alarm checks 30 minutes prior to the Alarm time. However, you can just tap on the time duration below the label and modify it accordingly. 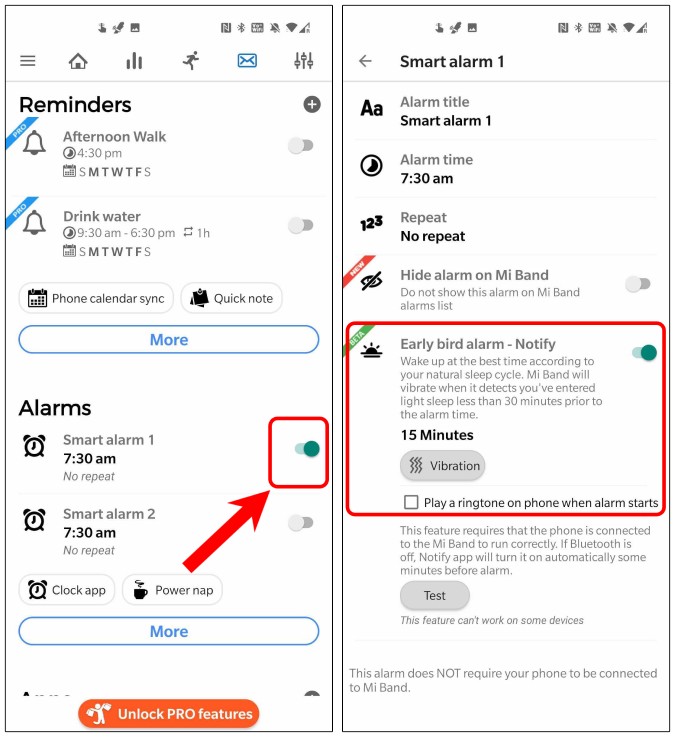 Read: 9 Best 10K Running Apps to Get Moving This Year

For the Alarm function to work well, make sure you have turned off Adaptive Battery or whitelisted the app from Battery optimizations.

7. Use without the Mi Fit app

However, unlike the previous generations, the process is a bit lengthy. We would have to manually fetch the Auth Key for the Mi Band 5. The process summary is as follows.

For an in-depth tutorial, you can read our detailed article on How to use the Mi Band 5 without the Mi Fit app. You can use this same trick to pair the Mi Band 5 with Notify & Fitness or GadgetBridge app. The entire process is the same. All you need is the Auth key.

So these were some of the neat Mi Band 5 tips and tricks. Let me know if you have something up your sleeve. For more issues or queries, let me know in the comments below.