Home » Internet » Microsoft To Do vs Google Tasks: Why I Use the Former

Microsoft To Do vs Google Tasks: Why I Use the Former 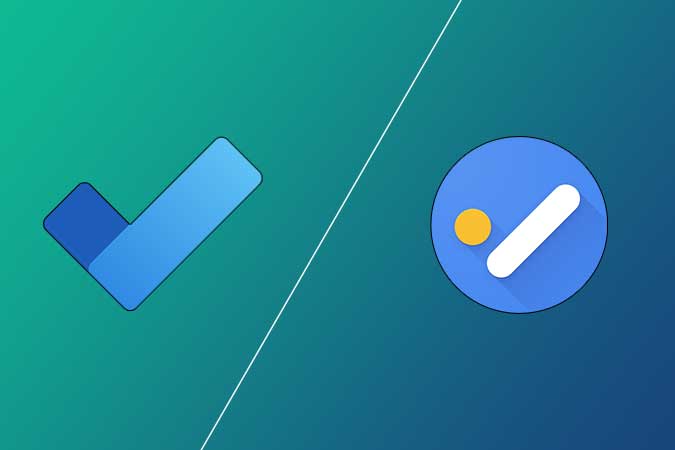 Microsoft acquired Wunderlist and turned it into To-Do, an app that I regularly use to manage my personal and professional life. Google designed Tasks that integrates with other Google apps and offers a similar experience. But which to-do app should you use and why?

Microsoft To Do vs Google Tasks

You already know, from the title, that I prefer Microsoft To-Do over others and I will explain why with examples in this article. Google Tasks is good but it is still not there yet and it seems that Google isn’t paying much attention to the app in the grand scheme of things. On the other hand, Microsoft To Do has good genes as it was built upon Wunderlist which was very popular with the users, so much so that the founder is trying to revive it back from the dead.

Let’s understand the key differences between the two to-do apps and how they function in day to day life in more detail.

Microsoft To-Do has a clean interface with all the groups and lists in a single line. There is no bottom or even sidebar. Tap on your profile picture to access settings and that’s it. There are two buttons at the bottom to create lists and groups. One caveat is that you can’t create a new task from the home screen but instead have to open a list first. But that can be sorted with a widget or notification bar shortcut. More on that later.

Google Tasks has a bottom bar where you can create a task quickly and effortlessly. The menu icon on the left is for switching between lists and the right is for accessing settings and sorting.

Both the apps come with a dark theme as is the norm these days. Both the apps are well-designed with a bare minimum approach.

Also Read: Notion vs Airtable: Which Modular Productivity App Should You Use

You can create lists in Microsoft To Do which can be further divided into groups. The options for the same are located on the home screen on the lower left and right side of the screen respectively. Google Tasks misses out on group feature. Creating a list in To Do is fun as you can choose a color theme and even an image as background. Some people like visual cues that help them find what they are looking for quickly.

Microsoft To Do will create a number of smart lists on the fly based on your current lists and tasks. Some examples are My Day, All, Completed, and Planned. Self-explanatory based on the name. You can mark a task as important by tapping the star icon next to it and it will be added to the Important smart list.

The task can be as detailed as you need them to be with sub-tasks, notes, attachments, and reminders. What’s worth noting here is that Microsoft only supports attaching local files. Not even OneDrive is supported at the moment. Sub-tasks are called steps for some reason. Useful for projects though. And you can just press Enter to add the next one. Again, that doesn’t work on Tasks.

Google Tasks takes a barebones approach where you can create a task and sub-tasks and add a reminder. That’s it. No support for local or Drive files or add notes (instructions).

Google Tasks is good enough for quick to-do lists but not when you are looking for smart lists or detailed projects. Google Tasks also misses out on the shared lists feature where you can plan an event with tasks among all group planners, for example. A hidden feature in Microsoft To Do is the hashtag. Adding # before any word will link it immediately. You can now link two or more different tasks from different lists/groups together using hashtags.

Microsoft To Do supports using the Enter key to create a task which is a small but useful feature. Also, you can add tasks using natural language in Microsoft’s to-do app (works only on iOS for now) but Google Tasks doesn’t support this feature even though we have apps like Google Assistant. On the flip side, Microsoft chose to skip adding this feature on Windows and Android, the former being owned by them. Strange times.

Microsoft To Do wins this round too. You can sort your tasks by date or due date, alphabetically, and importance. Reordering tasks is as easy as drag-n-drop. Completed tasks can be moved to the bottom of the list or simply disappear/archive.

Too many smart lists? You can toggle them on/off from the Settings based on your work schedule. There are handy widgets to manage/create tasks from the home screen but that’s not what I use. I pull down the notification center to create a new task on any screen via a pop-up. Much faster for capturing thoughts and ideas.

The only thing you can do in Tasks is sort by date and that’s it. Completed tasks are moved to the bottom of the feed. There is no way to archive them either. You may however delete them but only after opening the task again.

Microsoft To Do is not perfect and I wish it integrated with other apps like Todoist does. On the plus side, To Do is available on Android, iOS, Windows, macOS, and the web. That covers all major platforms.

Google Tasks only works on smartphones and there is no support for desktops. There was a web version but for some reason, Google deprecated it. On the flipside, Tasks integrates deeply with other Google apps like Gmail, Calendar, and their G Suite apps like Docs, Sheets, and Slides. Just open the sidebar and add the Tasks add-on. Almost forgot, you can also create tasks in Google using Assistant.

Both the to-do apps are completely free to use with no ads whatsoever.

Wrapping Up: Microsoft To Do vs Google Tasks

I think now you understand why I prefer to use Microsoft To Do over Google Tasks. The latter has a long way to go and judging by the way Google is treating Tasks, I am not very hopeful. At least, not in the near future. Microsoft’s to-do app is simply better but not for Wunderlist users. Importing your lists from the now-dead app is a chore and has been causing all sorts of problems. Fortunately, I was a new user and so things went really smoothly for me.