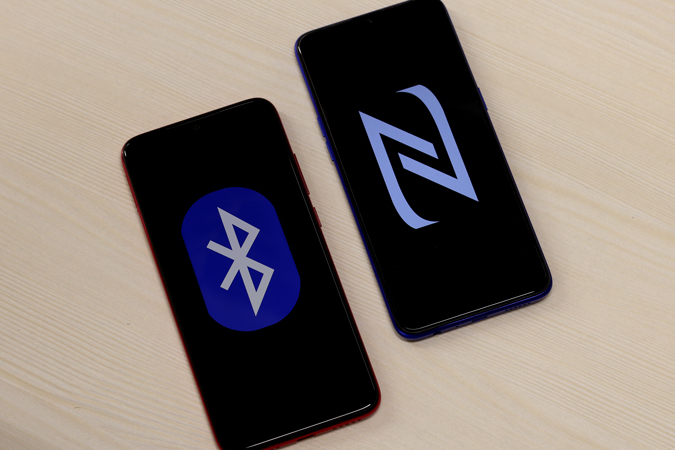 When I think of ‘NFC vs Bluetooth’, I think of ‘Apples vs. Oranges’. Both are different from each other, with different use cases. Still, many people find it confusing, especially when buying a new phone or NFC tags.  And I don’t blame them. There are many similarities between Bluetooth and NFC. Both are wireless technology. Both require special hardware. And both share information between two terminals. Nevertheless, there are quite different. So, let’s find out how.

If you need one line answer, this is the best one,

However, if you are looking for the in-depth analysis, here are a few key difference between NFC and Bluetooth.

1. NFC has a shorter range

NFC is a  weak radio signal. So it only works when you are near it. I mean, the two devices have to pretty much touch each other. For example, while sending a photo to your friend’s phone using NFC, the back of both phones should almost touch each other, the same is the case while making NFC payment.

Bluetooth, as you all know, has a better range. For example, you can send a photo to your friend’s phone over Bluetooth while being in the same room. In fact, the latest Bluetooth 5.0 can work up to 300 meters (ideally 100 meters)

Okay, when I say faster, I don’t mean the transfer speed. The new Bluetooth 5.0 can transfer data up to 48 MB/s, while NFC can do a few KB/s at best. However, NFC is quicker to set up.

There is no need to pair two NFC devices with a passcode. To send data, all you need to do is bring two NFC supported phones close to each other and data is transferred automatically. It is best to send small data like images and URLs.

No user data is collected while setting up a connection using NFC, thus keeping you anonymous. Since Bluetooth often require paring, it can possibly remember last connected devices.

Read: How Secure is NFC Technology

NFC payments are widely accepted in America, Japan and soon will be available worldwide. Even the new Mi Band 4 is rumored to have NFC. Bluetooth technology, on the other hand, is not capable of mobile payments.

5. NFC works without any power

Doesn’t matter which Bluetooth device you use, it’ll require some kind of power supply, either directly or from batteries. NFC, on the other hand, are special RFID tags that are passive in nature. That’s, they don’t require power to work. Confused? Well, Passive tags don’t have a power supply of their own instead they get their energy supply from the nearby device. Bluetooth in comparison can consume significant power.

Bluetooth has been present in the smartphone ever since they started becoming smart. Pretty much every smartphone, truly wireless earphones, wireless mouse, keyboards, etc have Bluetooth. NFC or near field communication is a comparatively new technology and not yet as popular as Bluetooth. NFC support is present in flagship phones like Google Pixel, iPhones, OnePlus, Samsung Note series, etc. However, budget Chinese phones like Xiaomi, and Oppo, do not offer NFC on their phones.

Read: Best Android Apps to Use NFC Tags to Its Full Potential

Differences Between NFC and Bluetooth

NFC or Bluetooth: Which one is better?

NFC is not better than Bluetooth; neither is Bluetooth better than NFC. Both are quite different technologies having their own advantages and disadvantages, depending upon the use. For example, to share a song, I prefer Bluetooth whereas, for a small link or mobile payment, I go for NFC.

NFC was a promising technology in the past but due to slow adoption in developing countries like India and China, it didn’t take off. One of the key features of NFC is mobile payments, but since, India and China are heavily dependent on cash or Alipay, NFC never made its way to budget smartphones. But, I still have my hopes high.

Let me know, your creative use of NFC in the comment below.