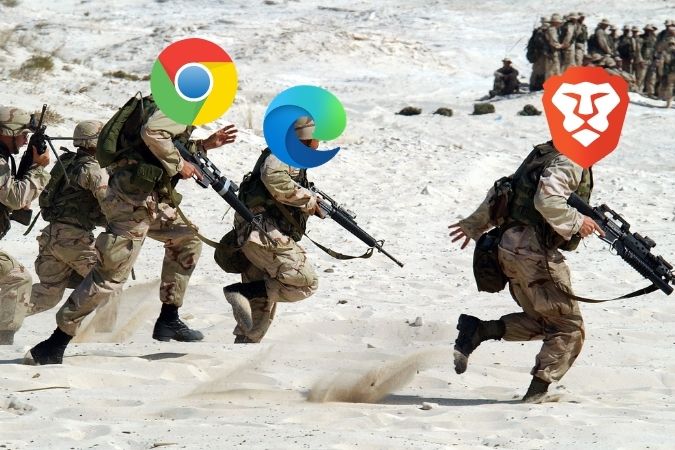 Tracker blocking and other privacy features are now offered in every web browser. It’s the listed feature on the home page of every browser that you download. But, as far as I know – aren’t advertisements the way browsers make money?

So, has this privacy enlightenment changed the way browsers make money or advertisements have changed overall? Well, after putting up my points on Chrome 83, I have answers and a few points to make. Here we go

First of all, let me explain third-party trackers. Suppose I visit site A. Now, I willingly read from site A and I am okay with them using analytics on my reading behavior. This helps them gauge my interests and feed me with more relevant articles. But, now there are third-party trackers such as site C and site D which collect data on me while I’m reading site A. I didn’t sign up for that and that’s why I am all in for blocking trackers.

Now that you get third-party tracker prevention, let’s trace back to when this all started. After all, ad blockers were supposed to be the “use it but don’t tell anyone” feature. However, suddenly it’s on the home page of every browser that you download.

Well, I have a timeline of these things, and please bear with me on this.

The biggest buzz was created by the DuckDuckGo search engine. It was more privacy-focused, promised to not collect data about you, and was adopted by a large number of web browsers. This was the first time when people started looking ahead of the Google Search engine.

Next, we had Brave which was the start of ad-blocking and tracker prevention being built-in browsers. Everyone started talking about Brave. Well, we had seen such browsers but none of them were able to sustain this model. But, Brave brought in Brave Rewards and that’s where things changed. Brave was everywhere! As of now, it has crossed 15 million active users which is a lot.

But the biggest change was the new Edge Chromium.

August 2019 was the date when Microsoft released the beta variant of Chromium Edge (I like the name ChrEdge). This ended the long battle Microsoft had against Chrome. They were becoming a part of the same Chromium family it was competing against. Now, you could see it as a huge win for Google Chrome because it was getting a huge, almost 65% of the web browser market share.

But, I would say this was the first time consumers and the tech media started paying serious attention to Edge. It was removing the old EdgeHTML engine and moving towards the Chromium Blink engine. The web doesn’t have to deal with testing websites on too many web engines. The web apps that worked well on Google Chrome worked the same on ChrEdge.

But, back to the topic, it offered tracker prevention. Microsoft, itself being an advertisement company, offers ad-blocking and tracker prevention. This pushed literally every major company to do it. Remember, when Apple gave up on the headphone jack, the world started improving Bluetooth.

Vivaldi holds a slightly prominent 1.2 million active user base. After ChrEdge, Vivaldi 3.0 brought tracker prevention and ad blocker to mobile and desktop apps. Vivaldi, as I would like to call was the MIUI of Chromium (except the adware). It provided a highly customizable and skinned version of Chromium. It brought the speed of Chrome and the customization of a third-party browser.

Prior to the Vivaldi 3.0 release, I have always made a point to mention that it doesn’t have native third-party tracker prevention. But, now I have to take my words back and edit those articles.

Now, let’s come down to Google Chrome and annoying ads. A while back, Chrome released the option to block third-party cookies in Incognito mode. In Chrome 84, heavy ad blocking will start. Google Chrome would consider something as a heavy ad if the user hasn’t interacted with it and it:

This might affect all that unnecessary video ads and pop-ups that make things annoying while scrolling. All that autoplay YouTube videos to garner views from the website readers.

Well, ads are basically what runs the web ecosystem. It is Google’s bread and butter. That’s how you read for free and that’s how I earn my bread and butter too. What if those ads were less relevant or less personal? Well, a study by Google itself shows that traffic for a site without cookies generated 52% less revenue for the publisher. And, even worse 62% less revenue for the news publishers.

So, does that mean ads have to be personalized or individualized? Well, personalized yes but not individually. Here, Google is working on Privacy Sandbox. So, a privacy sandbox is something that will ensure that a group of people is targeted rather than individuals. It’s an open web standard promoting the idea that most of the user data stay on his machine. In Google’s words:

We are following the web standards process and seeking industry feedback on our initial ideas for the Privacy Sandbox. While Chrome can take action quickly in some areas (for instance, restrictions on fingerprinting) developing web standards is a complex process, and we know from experience that ecosystem changes of this scope take time. They require significant thought, debate, and input from many stakeholders, and generally take multiple years.

In January 2020, Google announced that by the end of 2020, you will see measures taken to combat fingerprinting. So, does all of this make me trust Google and believe the web is gonna be a safer place now? Surprisingly, yes, it does.

First off, let me state that TechWiser itself is a digital media house and most of our revenue comes from ads. We stand for ad-based revenue but what we don’t stand for is user-data harvesting and selling it for pennies.

The bottom line is most of the browsers except Chrome have adopted ad-blocking and tracker prevention and going forward, this would be a default feature in every mobile and web browser. The more these companies do it, the more Google is pressed to respect user privacy and tracker abuse. It’s impossible for Chrome and the world to block ads on websites because hey, it’s everyone’s bread and butter.  But data abuse has to stop and when that stops, this entire data harvesting stops.

Now, that I have had my heart out, let me sip my coffee and we’ll meet soon until Manifest V3.

Also Read: [Opinion] It’s About the Journey, Not the Destination – What Does That Mean for Tech