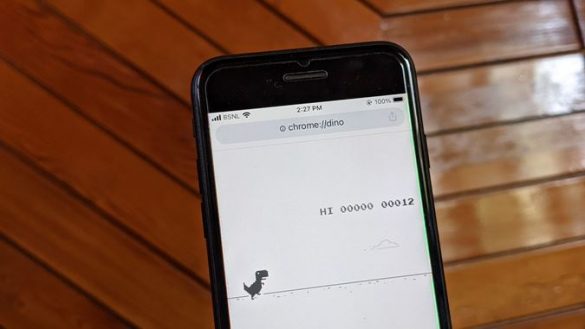 Typically, when your internet goes down, it’s maddening. But thanks to Chrome’s Dinosaur game, things become easy. The game automatically appears on Chrome pages when there’s no internet. It would be the only thing for which you would want your internet to stop working. However, you don’t need to do so. You can play the game on the internet and that too on mobile as well. Let’s check 5 ways to play the Google Chrome Dinosaur game on Android and iPhone with and without an internet connection.

In case you didn’t know, the Dino run game works in the same way on your phone as on your PC. That is, when you have no internet on your phone, open any page in Chrome, and you will be greeted by the Dino game. Tap on the screen to jump over the obstacles.

If you want to play the Dino game without turning off your internet connection or enabling airplane mode on your phone, simply open the chrome://dino link in the Chrome browser. Voila! You will be able to play the game while being connected to the internet.

Since Google Chrome comes pre-installed on all Android phones, you simply need to enter the above link. But you will need to download Chrome on your iPhone and iPad.

If you like to play the game regularly on your phone, entering the link repeatedly can be daunting. To avoid that, you can bookmark the link as shown next.

Chrome doesn’t let you directly create a bookmark for the Dino game on iPhone and iPad. You will notice that the Bookmark option appears greyed out. However, a workaround exists. Simply create a bookmark for any other link. For instance, bookmark TechWiser.com on Chrome from your phone. If you don’t know how to bookmark a website on your iPhone, tap on the three-dot icon in Chrome. A menu will appear. Scroll down in the menu and tap on Bookmark.

Now you need to edit the bookmark. To edit and access your bookmarks, tap on the same three-dot icon and hit the Bookmarks option. Please note that in the first case, you need to tap on Bookmark, and in the second case on Bookmarks.

You will find all your bookmarks. Touch and hold the one that you want to edit and select Edit from the menu.

In the URL box, remove the link and add Chrome://dino. Similarly, rename the link and hit the Done button. Congratulations! You have successfully created a Chrome bookmark for the game.

Alternatively, if you are signed in to Chrome using your Google account, you can create a bookmark on PC too. You can then access the same bookmark from Chrome on your mobile.

Google Chrome on iPhone offers an easy way to access the Dino game using widgets on iOS 14 and above. Touch and hold an empty space on your iPhone’s home screen. When the icons start to jiggle, tap on the add (+) icon at the top. Scroll down and tap on Chrome.

Swipe left on the Chrome widgets and you will see the Dino game. Tap on Add widget to add it to your iPhone’s home screen. Tapping the widget will open the game in Chrome. You cannot play the game directly from the widget.

Tip: The Dino widget is available on iPadOS 15 as well. Find out how to add widgets to the home screen in iPadOS 15.

Note: You would need a working internet connection to access the websites. These would work on Android, iPhone, and iPad.

If you are interested in high scores, you will like this website. You will see the highest scores of the day and the top 5 high scores of all time. Scroll down on the website and you can change the game theme. You have Mario, Batman, Joker themes among others.

This website lets you play the 3D version of the Dinosaur game. And if you want, you can play the regular version as well.

This modified version of the Dino games lets you collect various weapons that can be used in the game. You can collect up to 26 weapons.

This website not only allows you to play the standard Dino game, but it also provides numerous intriguing variations such as surfing, gymnastics, swimming, and so on.

Here are some more websites that offer the Dino game:

How can there not be an app for something? Thankfully, apps live up to their expectations and there are gaming apps for Chrome Dinosaur games too. You will have to download Dino T-Rex on Android. The game automatically runs in the landscape mode when you open it.

On iOS, download Steve – The Jumping Dinosaur or Tirek. Steve works in the Today view so you can access it quickly. And if you want a slightly advanced version, download T-Rex Runner-2.

How to Play Dino Game on Mobile

You simply need to tap on the screen to avoid the obstacles. The longer you play the game, the faster it will get. Once you crash into an obstacle, the game will restart along with your score.

How to Turn off the T-Rex Dino Game

To close it, simply hit an obstacle or close the tab or app where you are playing the game.

Can You Complete Chrome’s Dino Game

Yes, kind of but it will take you around 17 million years for the same. How do we know that? Well, the developer of the game has said it himself so who are we to argue.

Run to the End

Here is a cool tip. Think about something else instead of the game while playing it and see the magic. You will ace at the game when you play it subconsciously without putting any conscious effort.

Hope you were happy to know that the internet isn’t required to play the Google Dinosaur game. And that you can run it on mobile too in multiple ways. While you are discovering new things, you might want to check out useful Chrome flags or how to run Chrome extensions on Android.