Apple Private Relay vs VPN Apps: How They Differ 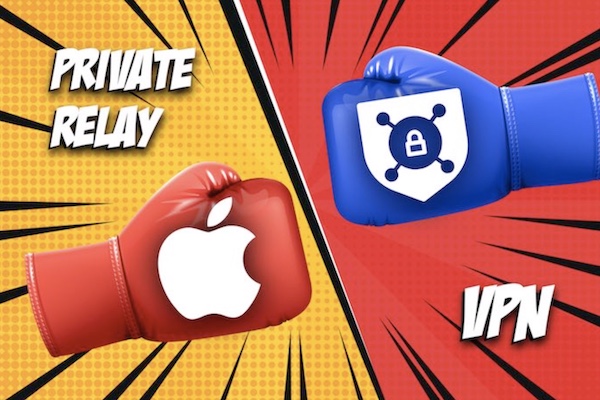 Every year at WWDC, Apple showcases new versions of iOS, iPadOS, and macOS along with their innovative features. Private Relay or Apple VPN was the talk of the town at this year’s WWDC event, mainly because it could replace your everyday VPN app, or could it? I don’t take things at face value and decided to dig a little deeper. Let’s understand what exactly is private relay, how it functions, how is it different from regular VPNs, and more importantly, do we really need both on Apple devices.

What Is Private Relay

Private Relay is a new service from Apple released with the launch of iOS 15 that will encrypt your browsing traffic and relay it through two different servers to keep the data traffic hidden or anonymized from the prying eyes of the ISPs. The web browser traffic first goes through an encryption service on your device that hides the traffic and prevents ISPs and other agencies from identifying your browsing data. After that, the encrypted traffic is routed to another server that assigns it a different IP address. This second part is similar to the VPN, hence the comparison with VPN apps.

Private Relay will be available on all Apple devices running Safari on iOS 15 onwards. You would also need an iCloud+ subscription before you can get it to work on your devices.

Both Private Relay and VPN apps mask your IP address and hide your digital identity from trackers and internet service providers. For example, if you look up your IP address on What’s My IP Address with and without VPN turned on, you will be greeted with a different IP address.

Similarly, once you turn on the Private Relay from iCloud settings, your actual IP address will be masked. Also, both Private Relay and VPN hide your exact geo-location from trackers.

Both VPN and Private Relay from Apple let you access websites that are blocked by your ISP. Although, this could change in the future with the public release of iOS15. I’d update whatever changes come over the months.

The VPN apps and Private Relay share a lot of similarities and you might consider letting go of your VPN. However, let’s take a look at what’s different between traditional VPN and Apple’s Private Relay.

1. Private Relay Only Works on Safari

Unlike VPN apps, Private Relay works only on the Safari browser. This way, Apple gives its users an incentive to switch to Safari. Whereas a VPN works on all browsers and even apps and devices. So, if you’re using Chrome, Firefox, desktop, or Smart TVs, a VPN is still a better option.

Even though I was able to access ISP blocked websites with Private Relay, this doesn’t change the fact that Private Relay may not be able to unblock geo-restricted content.

Private Relay masks your location but still keeps it within your country. It may relay the requests to another city but that’s about it. Also, there’s no option to change my location to a country of my choice. Therefore, with Private Relay, I can’t access Netflix US or BBC UK, etc.

VPNs, on the other hand, lets you choose from various servers located in different countries. So if something is geo-restricted in India, say BBC UK, I can simply switch to a UK server using a VPN and access it. Similarly, I can switch to any US servers to get access to the Netflix US catalog. Although, you will most likely need a paid VPN to unblock geo-restrictions.

Private Relay isn’t free but if you’re already paying for iCloud storage which starts at as little as $1, the Private Relay feature along with many other privacy options are already added at no extra cost.

Most VPNs have a subscription model which usually starts at $3 per month. Although you can use free VPNs as well, those are either not reliable, unsecure, or offer limited bandwidth. We highly recommend paid VPNs over free ones.

In an interview with FastCompany, Apple’s software chief, Craig Federighi talked about the issues with VPN services. “With a traditional VPN, users’ internet traffic is encrypted and the ISP doesn’t know what site you are visiting or your actual IP address. But the VPN provider itself knows your real IP and the websites you’re visiting. And the problem is, you can never be sure what a VPN is doing with your browsing data.”

iCloud Private Relay, on the other hand, uses a dual-hop architecture, encrypting data before it leaves your device. In simple words, not even Apple knows where you’re headed on the internet.

5. Private Relay Is Not Available Everywhere

Apple’s new encrypted browsing feature won’t be available in China, Saudi Arabia, Belarus, Colombia, Egypt, Kazakhstan, Saudi Arabia, South Africa, Turkmenistan, Uganda, and the Philippines. So, if you are living or planning to visit these countries anytime in the future, VPN is your only option. That said, only a few VPNs that are registered with the Chinese government are officially allowed to work in China.

This might just be a small difference but Private Relay stays active the moment you get the subscription and you never have to worry about connecting it. VPN, on the other hand, would at least require you to install a VPN profile and then connect it manually. To be fair, most VPNs have an auto-reconnect feature nowadays but that depends on the VPN provider.

Even though there are some similarities between iCloud+ Private Relay and VPN such as masking IP addresses and unlocking ISP blocked content, both of them are quite different products. Apple Private Relay specializes more in terms of privacy and security. However, if you are looking to bypass geo-restrictions, ability to choose different servers, or use anything other than Safari then VPN is still the only choice here. What do you think? Let me know on Twitter.