Most smartphones only come with 2 buttons these days. One is the power button and the other is a pair of volume rockers. But you don’t really need to use them. I mean, you can easily change volume using touch controls and all Android smartphones can be unlocked using gesture, finger or face ID. This makes your hardware buttons like power and volume useless, at least most of the time. Or maybe you are tired of accidentally activating Bixby on your Samsung phones.

Why not breathe new life into your smartphone by remapping these buttons. By doing so, you will be able to use these buttons to perform other tasks. I can use the power button to take a selfie or open a particular app that I frequently use (Google Calendar). Once you know how to remap the hardware buttons and create shortcuts, the possibilities are endless.

Now that you know the benefits, let’s take a look at how this can be achieved. I will share both root and non-root methods here.

Remap Any Hardware Buttons on Android

This method involves root so if you haven’t already rooted your smartphone or don’t know how to do it, I would suggest you to pay a visit to XDA_forums. It is a popular platform that is frequented by users and dev teams alike. Select the sub-forum for your smartphone to look up ways on how to root your particular model. Note that rooting your smartphone will void your warranty.

Go to Security under Settings on your Android and enable the Unknown Sources option. This will let you install apps from APK files downloaded directly on your phone instead of just the Play Store. When you open the app, you will now be asked to select an Action and a consequent State for the hardware button in question. You can set it to Camera so that when you click on the power button, it will launch the camera app instead of locking or waking up your phone.

The method is really old and it has been some time since the app has been updated by the developer. There is also the fact that rooting your smartphone will leave you warranty-less as it is against the terms and conditions of all Android manufacturers. People still like to do it because it gives them the freedom to tweak and use the OEM as they please, and be creative.

Xposed Framework remains in active development and offers more features than you will know what to do with. It is very powerful and though you need a rooted Android smartphone, there is no need to flash a new ROMs.

Xposed is an Android framework that was built to allow developers to build modules that can be installed by users customize various aspects of their smartphone. Xposed Framework will itself won’t add any functionality. You will need to install individual modules after installing the Xposed Framework. Think of modules as apps that add new features.

Just download and run the framework on your phone. You will be asked to give permissions and reboot your phone once. Do it. Again, note that this involves rooting your Android so make sure to do that before installing Xposed.

You can either browse the Xposed app on your smartphone or follow this link to see a list of all the modules that are available on the framework. There a quite a few modules that will enable you to remap hardware buttons but I would recommend All My. You can remap the next button or the volume up button to use it for launching flashlight. If you are using a headset, you can use the redial button to play the next song in the playlist. Plus, it comes with several other features like disabling battery, wake on charge, and other indicators, enable touch-key light and more.

There are over 1300 modules to choose from and each one comes with its own set of features.

The Xposed Framework is awesome but not without drawbacks. You lose functionality and the safety net of several key apps like Google Pay and net banking apps. This is because Xposed Framework will modify the root partition where the OS in installed. Magisk Manager will solve this issue by creating a partition in your boot partition instead. When an app is launched, it will simply create an overlay allowing you to use the apps as intended without interfering with its properties. In case you are wondering about security, you should know that Magisk Manager is open source.

You now have Magisk Manager installed on your device. Now it is time to search for some amazing modules or mods that will allow you to extend or change the functionality of the hardware buttons on your Android. Here is one available on GitHub. Go download and install it the same way by allowing app installations from unknown sources.

The only app in the list that will let you customize or remap your hardware buttons without having to root your smartphone. As such, the process is relatively simple. Download the Button Mapper app from the Play Store and install it. At this point, you should whitelist or exempt this app from any task killer or battery optimization apps that you may have installed on your droid. These apps may disable or kill Button Remapper.

Some smartphones from Xiaomi and Huawei, constantly kill services to save battery life. If your phone has automatic battery management, you need to exempt Button Mapper from battery optimization.

You will now see a list of all the hardware buttons the app can detect. You can click on volume and headset buttons to remap and assign it to different functions or even launch your favorite apps (I set it Google Assistant). If there is a hardware button that is not available in the list, tap on Add Buttons to configure it, for example, power button. There are a number of options to choose from like clear app-specific notifications automatically, change brightness, toggle settings like WiFi, flashlight, and more.

To make things really interesting, Button Remapper also works with the Tasker app. An uber app that will let you customize and automate pretty much every part of your Android smartphone. While the app worked as intended, in my case, it failed to detect the power button. I guess a lot also depends on your smartphone OEM. Still, as the app is free to download and doesn’t involve rooting, I suggest you try it. Even if you are able to remap just the volume buttons, it should improve your usability significantly.

bxAction is the app you need if you want to remap the Bixby and volume button on your Galaxy Note 8 and Note 8. Download the app from the Google Play Store, it’s free. Once done, install the app and give it all the necessary accessibility permissions. Once everything is set up, you can either choose to disable the Bixby button or remap it to launch any app, Tasker task, or my favorite Google Assistant. In my testing, the app works as advertised, however, there is a small delay between when you press the button and the remapped action. 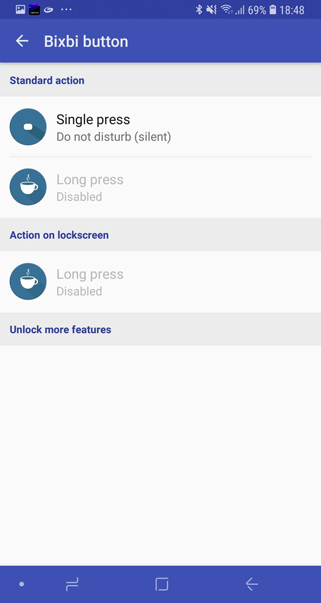 It seems that the days of the hardware buttons are only numbered with more and more manufacturers looking at creative ways to do away with them. In such a case, it is also possible that future smartphone models may not have any buttons on them, thus eliminating the need for hardware remapping buttons altogether. Until that day arrives, you can use one of the above method, or apps, to get the most out of your Android smartphone.