Recently, we had covered some of the best ways to run Windows apps on macOS. The point was to overcome the lack of multi-platform software. This time, however, we have something different. We are going to talk about the ways to run Android apps on Mac. Yes, about using Instagram, playing Asphalt 8, or listening to Audible on Mac. 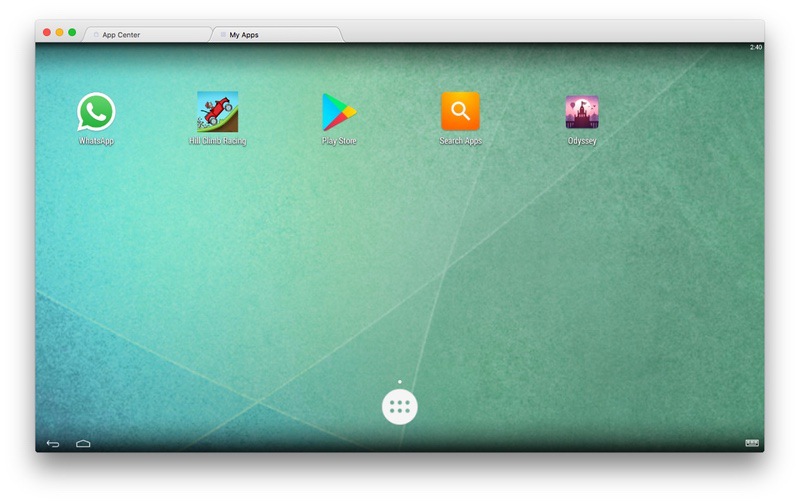 The BlueStacks interface is equally awesome as well. Apps are opened in individual tabs and you have access to Google Play Store. Depending on the specifications of your Mac, BlueStacks lets you handle multiple apps with ease. Despite the optimizations for running apps, BlueStacks offers a true Android feel as well. You can even make changes from the Settings section.

Installing and using BlueStacks is like a piece of cake! You have to download the free installer from the official site of BlueStacks and run it. If you have previously installed bluestack, do a clean uninstall, before you reinstall it. Once the installation is done, it may take a few seconds for starting up. Before you can install apps, however, you need to sign into a Google account. Altogether, we think it’s really easy to get started with BlueStacks.

As far as running apps is concerned, BlueStacks does the job very well. We were able to install and use apps like WhatsApp and Instagram without any hassle. We also tried playing some Alto’s Odyssey game.

We think BlueStacks is the best option for those who need to use Android apps on Mac. It works fine when it comes to running apps like WhatsApp and Instagram. While the gaming performance is okay, we believe there are better options.

At the core, Android is also a Linux-based operating system. As it happens, you can install Android on Mac using a tool like VirtualBox. In order to do this, you have to create a virtual machine and install Android in it. Compared to the other options we’ve listed, this VirtualBox method offers better control over the Android device and the apps you install. 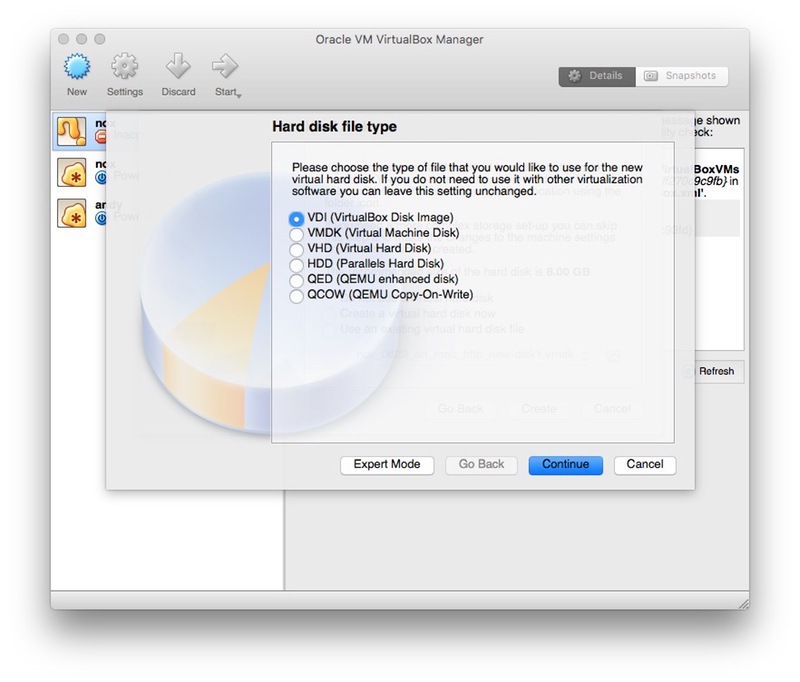 Once the installation is done, VirtualBox gives you a pure Android experience. This is because we’re installing the basic Android Operating System on the virtual machine. However, you should not expect an optimized environment for running apps or games. Chances are, there are some bugs too. On the bright side, you can deploy Android v8 Oreo in the virtual machine.

We would not say that Android on VirtualBox is easy to set up. There are some downsides that you will have to tolerate in the long run. In order to do this, you need to download Android x86, a project that ports the popular OS to PCs. Then, as we always do, you can create a virtual machine based on Linux, Android. Once the installation is done, you’ll have a full-screen Android experience.

While apps like WhatsApp and Instagram work fine, the performance isn’t the best. We would not suggest this method if you’re into gaming either.

Running Android on Mac using VirtualBox is best when you need better control over the process. As a virtual machine, you can customize performance too. However, in the long run, you will have to compromise overall performance and gaming controls.

Check Out VirtualBox and Android x86

If you want to play some graphic-rich Android games on Mac, Nox Player Mac is the best option in town. It’s an Android emulator that prioritizes speed and performance. There are also some features such as screen capture, on-screen button mapping etc. Once set up, Nox Player Mac offers a standard Android experience as well.

Nox Player Mac manages to run apps as well. However, we found that things aren’t as smooth as BlueStacks when it comes to app downloads and installs. But, the reason you should install Nox Player Mac should be to play high-quality games like PUBG on Mac.

To install Android apps on your Nox Player, you can either login with your Google account and use the built-in Google Play Store or if you don’t want to go through that hassle, you can download the apk using the browser and install it directly. 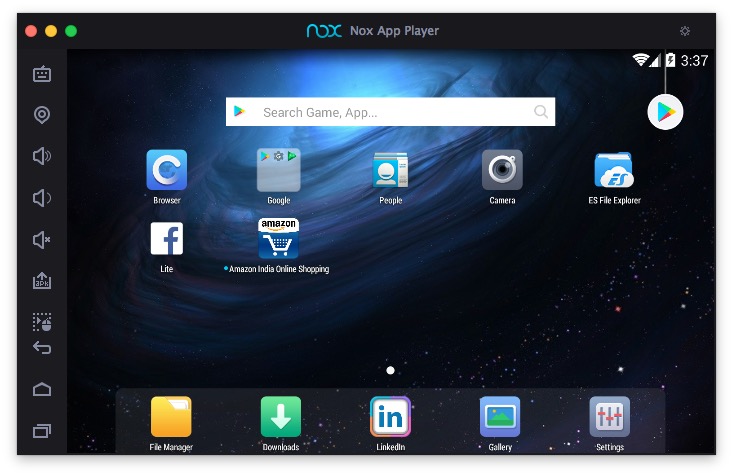 Nox Player Mac is the easiest to install. It doesn’t even ask you any questions. Just run the installer and in a few seconds, you will find the fully-fledged Android virtual tablet. It runs Android v4 KitKat — which is a downside when compared to others.

Nox Player Mac is perfect when it comes to handling popular apps. So, if you want to bring some common apps and high-end Android games to Mac, choose this program.

Nox Player Mac is the best option if you’re into high-end Android games. Even if you have a mid-end MacBook Air, it should offer the best performance. Also, thanks to the macro and mapping features. We’d also recommend the tool for running WhatsApp and all.

#4 Genymotion — Most Suitable for Developers

Genymotion is an innovative way to run Android apps on Mac — and on Cloud, for that matter. However, it is offering a bunch of different options. If you’re a professional, you can create a virtual Android device on a Mac or in the cloud. Let’s come down to the Desktop version, which is great. You will be able to create a big variety of Android configurations for testing. 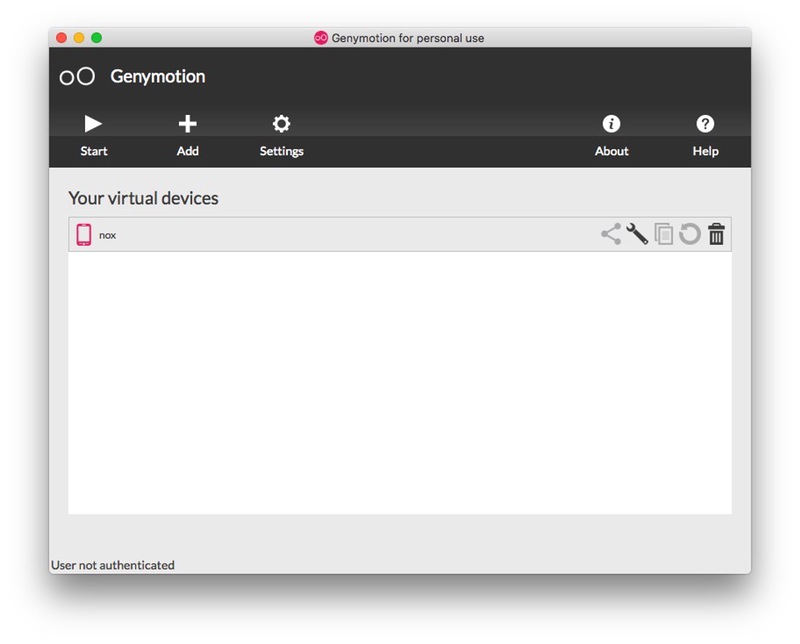 For instance, you can change the Android version, device hardware etc. Genymotion is the best option to make sure that your app runs perfectly on all Android devices out there. However, if you are getting started as a developer, you can find standard solutions as well. Genymotion also offers some additional features, for instance, embed your Android app on the website and let people try the app.

There is no necessity that you should install Genymotion on your Mac. As we said earlier, it can be used as a cloud service as well. However, Genymotion Desktop is really easy to install. We used the Personal version of Genymotion as well. It’s more convenient if you just want to try some apps. On the other hand, if you like the fully-fledged Android development experience, Genymotion Desktop is the way to go.

Running apps on Genymotion isn’t as smooth as the other platform. This is because the emulator has a major focus on features that help developers.

Genymotion is the best solution for Android developers who want to run their Android apps on a number of virtual devices. It syncs so well with your coding process and customization needs. Thanks to the plug-in, you can integrate this program with Android Studio as well.

Last but not the least, Andy is another way to run Android apps on Mac. However, compared to all emulators we’ve listed above, Andy offers a smoother workflow. The best part is that you’re getting a 100% full Android experience when you start up. You get built-in apps like Gmail, ES File Explorer and a lot more. It’s running on Android v4.0 KitKat, though. 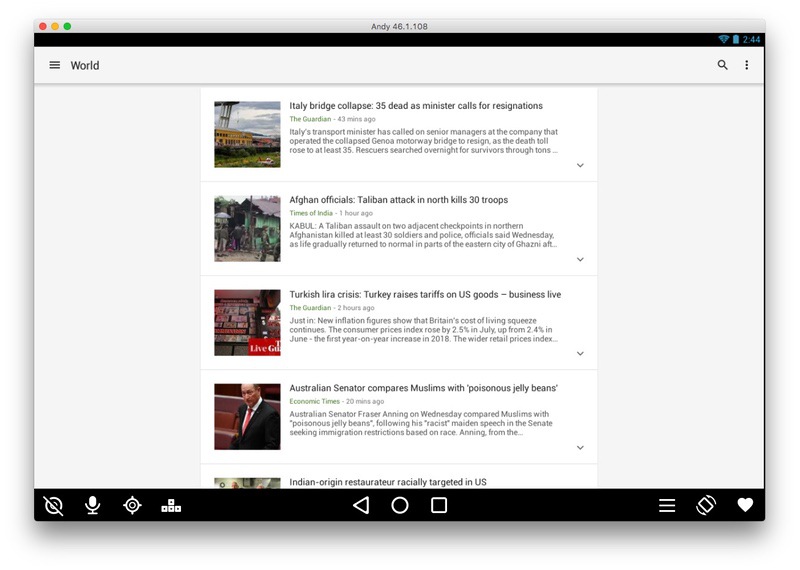 Because Andy comes with Play Store access, you can easily download and install apps. There are some other important features as well. For instance, you can run the Android emulator in vertical and landscape modes as well. Also, there’s Key Mapping and Location manipulation. These features are awesome when you want a more optimized way to run Android apps.

Andy has one of the easiest installers we’ve seen. It’s an online installer, which would download files over an Internet connection. It needs to be noted that Andy downloads around 500MB of files, the largest on the list. Once the installation is done, Andy will show you the standard Android interface. You can use the mouse and keyboard for managing the virtual Android tablet.

Andy offers the perfect level of optimization and a standard Android experience. We’d recommend this tool if you need a real-like virtual Android device on your Mac. Of course, there are some performance lags but you can avoid it by avoiding multitasking.

The best way to Run Android Apps on Mac?

So, these are the five different ways to run Android apps on Mac. In a way, you’re creating an Android device within macOS environment as well. As we said earlier, not a single solution is suitable for everyone. We have recommended Nox Player for Mac if you want to play games. On the other hand, if you just want to use apps smoothly, BlueStacks and Andy are the best options. And, for those upcoming developers out there, we will recommend Genymotion, which has a ton of features packed inside.