How to Set Video as Wallpaper on iPhone Lock Screen 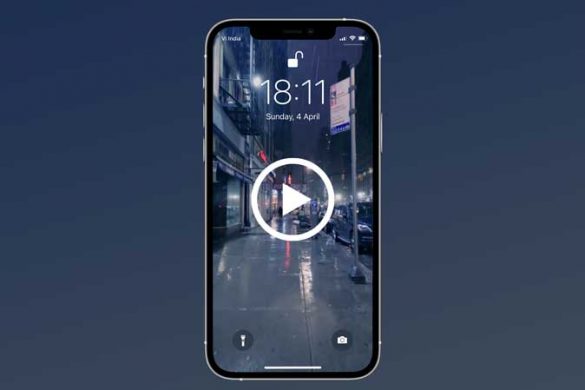 Let’s say you got curious seeing your friend holding an Android with a video wallpaper on the screen. The only problem is that you have an iPhone and it doesn’t let you set videos as wallpapers on the lock screen, natively. However, there are clever workarounds. Here is a step-by-step guide on how to set a video as wallpaper on iPhone’s lock screen. Let’s begin.

Therefore, if you want to set a short video as a wallpaper on the iPhone lock screen, you’d have to convert the video into a Live Photo first and then set it as a wallpaper. With this crucial information out, I have found a few apps that let you convert a video clip into a live photo easily.

intoLive is a popular app that many people use to set a video as wallpaper on the iPhone lock screen. It offers a refined interface that can help you create Live Photos from your videos. Not just that, you can do basic editing on your video such as changing the background, adjusting playback speed, and rotating and flipping the video.

You can create a Live Photo from a video that’s five seconds in length or trim a longer video to fit in the time frame. intoLive can increase the time from five to 30 seconds with a one-time in-app purchase. The pro version includes extra features such as creating a slideshow with 30-pictures, additional filters, and no ads.

1. Start by installing the intoLive app on your iPhone from the App Store. Open the app and grant access to the video that you wish to convert into a Live Photo. After that, select that video to proceed to the editor.

2. You can adjust the duration of the clip, change the background, key photo, filter, speed, size, crop, etc. After making all the changes, tap Make on the top right corner.

3. That would process and convert your video which may take a few minutes. Once done, tap Save Live Photo at the bottom.

4. Open the Photos app and tap the Live Photo that we just saved. It should show a live icon on the top left as shown in the image below. Tap the Share button on the bottom left. Select Use as Wallpaper.

5. Make sure Live Photo is turned on, tap on Set, and select Set Lock Screen.

2. VideoToLive- Set a Video as Wallpaper

While intoLive is perfectly capable of creating Live Photos for setting as wallpaper on the iPhone, it can only output a 5-second long clip. Even after upgrading to the Pro version, the limit is increased to 30 seconds only. If you have a video clip longer than that and wish to create a video wallpaper from that, VideoToLive is an option. VideoToLive doesn’t have fancy editing tools built in. It has basic tools such as crop, rotate, flip, and a few filters. It’s simple and creates a Live Photo from the entire clip irrespective of the video length. However, using such a large Live Photo does stress the hardware and it takes a little to process the video.

1. Start by installing the VideoToLive app from the App Store. Open the app and grant access to the video you wish to convert into Live Photos. Select the video from the list and tap Convert.

2. Just like intoLive, you can make a few adjustments like rotate and flip the video. The best part about this app is that it gives you a live preview of how the video would look as wallpaper on the lock screen.

3. You can also change the aspect ratio of the video so that it fits better on the lock screen. After making the adjustments, tap Convert Now.

4. While testing, I chose a 45-second video and converted it to a Live Photo. The app didn’t clip or trim the file and the Live Photo was still 45 seconds long. You would find the newly saved Live Photo in the Photos app. Select the Live Photo and tap Share on the bottom left.

5. Tap Use as Wallpaper. Make sure Live Photo is turned on and tap Set button on the bottom right.

6. Select Set Lock Screen and that’s it. Your iPhone might take a while to process such a large file but once it is done, your video will be set as lock screen wallpaper.

Due to file size restrictions, I couldn’t upload a full 45-second clip but I assure you the video played in full on the Lock Screen.

How to Set Video as Wallpaper on iPhone

These were two methods to set any video as wallpaper on the iPhone lock screen. As iPhone doesn’t let you put any file on the lock screen, developers have to get creative and find ways that are not conventional. While intoLive is a well-built app with tons of unique features, I like VideoToLive more. It doesn’t limit the size of the clip that can be set as wallpaper and you can create Live Wallpapers without any artificial limits. What do you think? Which app would you use to set a video as a wallpaper on your iPhone. Let me know on Twitter.