SmartDNS vs VPN – What’s the Difference?

How VPN and SmartDNS work?

Say you’re in India and you want to access Netflix. So open up a browser and type netflix.com, In a regular internet connection (with no VPN or proxy setup) it would redirect you to your regional catalog which in this case is Netflix India.

But say I wanted to watch the catalog from Netflix US. Well, the first thing I’d think of is using VPN to overcome Geo-restrictions.

With a VPN Connection

So, in order to watch Netflix US, I’d use a US based VPN. And this, for the most part, works and is bog standard.

But, because you’re using a VPN all of your data is encrypted making your streaming real slow

So a VPN is not the ideal choice whilst streaming videos

With a SmartDNS Connection

When it comes to unblocking geo-restriction on videos sites like Netflix, HBO NOW etc, Smart DNS is the better option. Why? Well, unlike a VPN, SmartDNS don’t change my IP address or encrypt the data. So every connection that you make is high speed just like a regular connection.

The way SmartDNS works is, well, really smart. While you are doing a normal browsing, it doesn’t interfere with your connection. But when you make a connection to video streaming sites like Netflix, Hulu, Amazon prime video etc. SmartDNS will change the DNS server from your country to the US. So instead of using DNS server provided by your ISP, it would redirect the case specific website to the DNS server in the US. And since Netflix (or any Geo block website) see the traffic coming from US DNS server, they think you are based in the US and thus let you bypass the Geo restrictions without slowing the stream down, unlike a VPN.

Smart DNS is similar to something like switching the license plate on a car.The car is still in India but Smart DNS will change its license plate to the US and when Netflix US sees this it would think of it like any other. 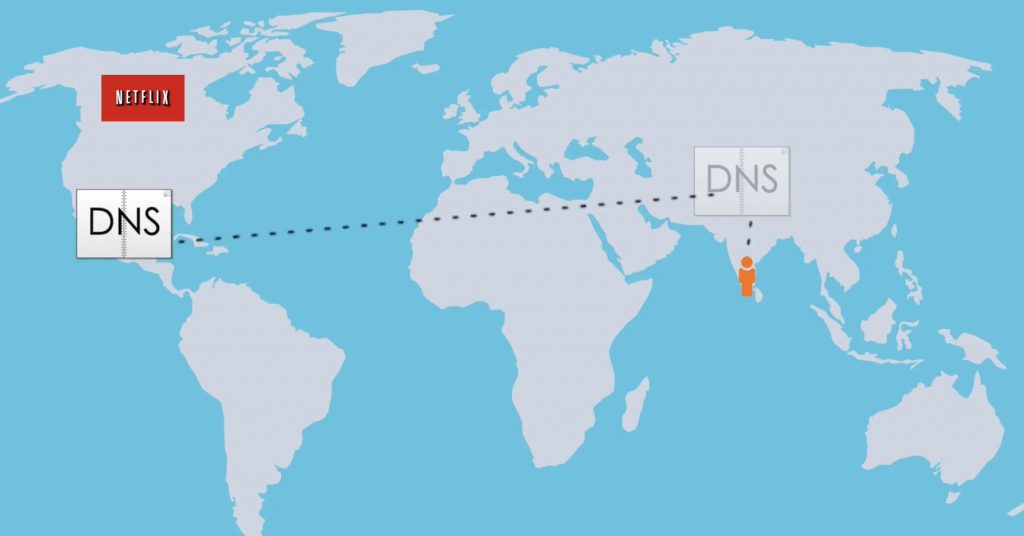 SmartDNS vs VPN – The difference

If you’re using a VPN it would change your IP address and push all the traffic through an encrypted tunnel. This encryption provides privacy and security. But since all the traffic goes through an encrypted tunnel your video streaming would be slower. Not to forget that VPN’s are a bit expensive and rather hard to setup on routers and media streaming devices like PS4, Apple TV

Smart DNS, on the other hand, doesn’t change your IP address or neither does it encrypt your traffic. Now, since there is no encryption, you also don’t get any privacy or security benefits but on a flip side your video streaming will be a lot faster and it’s cheaper to set up on every device including routers and media streaming devices.

VPN or SmartDNS – Which’s one better?

Well, that isn’t the right question, it would rather be which one’s better for what situation. If you need privacy and security then go with a VPN, but if you are using VPN mainly to overcome geo-restriction on video sites then go with a SmartDNS.

Imagine I’m at an airport and using the free Wi-Fi. then it would be more secure and private to use a VPN for browsing, but if I wanna kick back and stream some HBO/Netflix outside my country Smart DNS would be a safer bet.

Which SmartDNS or VPN should I go for?

There are lot of things to consider before picking up a VPN or SmartDNS, like – where are server located, their privacy policy, do they keep log of your data etc etc. We have a detailed guide on selecting a good VPN here, but in general, I suggest TunnelBear for VPN and SmartDNSProxy for SmartDNS. The former one give 500 MB of free data every month and then it’s $10 per month, while Smart DNS Proxy comes with 14 free trials and after which it’s $5 per month.I use both of this service and so far I’m a satisfied customer.

I use both of this service and so far I’m a satisfied customer.

Here is a quick video on VPNs and SmartDNS: What’s the real difference?