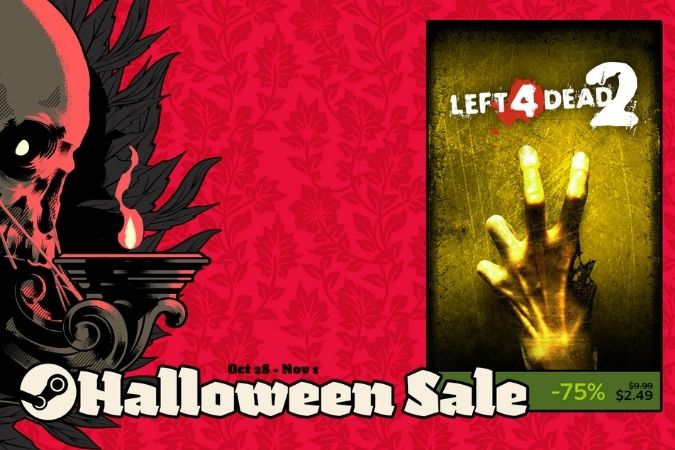 Steam has announced a Halloween sale that will mark the end of the Autumn and the beginning of the Winter season. There will be three sales. The first one begins on the 28th of October and continues till the 1st of November. This is called the Halloween Sales. The second one is called Autumn Sale and will commence from November 24th and last till November 30th. Finally, the Winter Sale will be held from 22nd December and continue well into January till the 5th.

The month of October is about to end which means Halloween and spooky goody sales! Steam has already started the celebrations with some cool deals on games that you can get for less than ₹1500 right now. Grab them before they disappear like the ghost of Tsushima. Some deals are already live while others were on sale at similar prices last year, so we are making an educated guess on possible discounts this year.

This franchise has been around for a really long time ⏤ 1996 to be exact. They have now started remaking their own previous titles from the ground up with enhanced graphics and gameplay. Resident Evil 8 just launched a few months back. Though it may get a price cut, it won’t be that big of a discount considering the title is still fresh. But, Resident Evil 2 Remake and Resident Evil 3 Remake, two excellent titles, will be heavily discounted on Steam Halloween sales. Both were launched in 2019 and 2020 respectively and have been regarded as excellent horror shooter titles. Resident Evil 2 Remake has already seen a price cut to ₹799 down from ₹1999, and Resident Evil 3 Remake is at ₹1200 down from ₹3500. Watch out for other titles in the franchise.

Steam reviews regard it as “Overwhelmingly Positive”, yet this game isn’t officially out. It is in the stage of early access. Phasmophobia puts players in the shoes of a Ghost Hunter and can be played in either single-player mode or a max of 4 player co-op. And trust me when I say this, you shouldn’t venture into this game alone. One of the key aspects is its use of microphones. The game uses player audio into its gameplay mechanics in a crucial manner as no other game has done before. This needs to be experienced to be believed. Being an early access title, it usually retails for ₹439 but during sales, expect the game to get some discount and come down to a price of around ₹350.

Released way back in 2010 for the Xbox 360, and in 2012 for the PC, Alan Wake offers a cinematic take on the entire horror trope. You play Alan Wake, a writer who witness his writing come to life in front of him in a twisted manner. A dark presence stalks him in the small town of Bright Falls, as he is thrust to the brink of sanity to unravel the mysteries of the town and save the love of his life. The game usually retails for ₹459, but during sales, expect it to be around ₹200.

One of the finest first-person survival horror titles out there. This is one of those rare titles that should be played with lights off and a headset to get the best experience. Players assume the role of Amanda Ripley, daughter of Ellen Ripley, a continuation from the Alien movie franchise. The selling point is the antagonist, Xenomorph, who can adapt itself to the various methods the players choose to evade. The AI implementation in the game is superb. The game comes with a price tag of ₹849, but during sales, it could cost around ₹200.

With an “Overwhelmingly Positive” ranking in steam reviews, and quite rightfully so, Outlast and Outlast 2 is a one-of-a-kind game. First-person survival horror at its finest. Where many other games provide the player with an offensive mechanism to fight back the evils lurking in the neighborhood, Outlast series strips the player off of this power. In the first game, the player is equipped with only a Camcorder and must survive the horrors of Mount Massive Asylum. The two games come in a bundle with a price tag of ₹822. During sales, expect the price to be discounted further.

We will keep you updated with more information when the sales actually begin from tomorrow. We recommend you subscribe to our social media channels and RSS feeds to receive up-to-date information on the latest deals and discounts.