As a hardcore Stock Android enthusiast, I used to hate Custom ROMS like Xioami’s MIUI, but over the past few months, I’ve changed my opinion. The truth is as of 2018, the MIUI is as good as Stock Android, if not better.

A little history first. I’ve to use Stock Android on Moto E/G, Nexus 5/6, and Pixel. And for past few months, I’m using Xioami Note 5 (and Note 3 for some time) which runs on Xiaomi’s custom ROM, aka MIUI. So, in this article, I’ll be comparing the features on Stock Android vs MIUI. Let’s begin.

Where MIUI is better than Stock Android

While I like the look and feel of Stock Android, there is no way to change themes without using third-party launchers.

MIUI, on the other hand, has a dedicated theme store where you can get skins for Samsung, iPhone and Pixel etc, without having to change your launcher. And it not just carry the look and feel, but also the ringtones and fonts. Though, the best part of the theme would be the interlinking customization. Every part of the theme can be mixed and matched from several themes, for example, I can pick the lock style of note 7 and keep the status bar for the pixel. It’s fun. 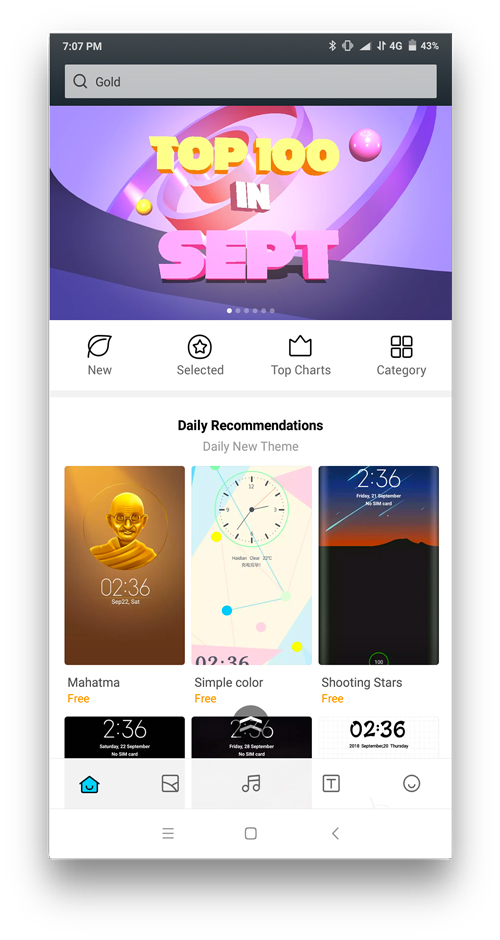 I’ve two Audible accounts with different audiobooks collection and I like to listen to each of them without manually logging out of accounts every time. On MIUI, you can find a Dual Apps option under Settings, which lets you run two version of any apps. And it’s not just Xiaomi, Huawei and Samsung also have a native dual mode, so it’s about time that Stock Android should have it too.

Read: Android Apps to Use Multiple Accounts on the Same Device 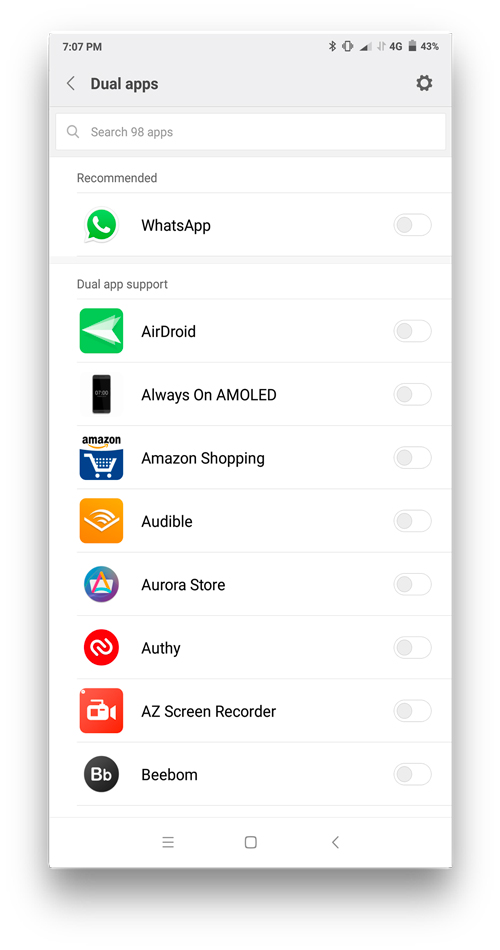 One of my fav features on MIUI would be native call recording. When making a phone call, you can see a small record button right side of the dialer screen. Press that while on the call and it’ll record both sides of the conversation and saved in the Recording app on your phone. The audio quality is quite good compared to third-party call recorder apps. Although, it would have been awesome if there was an option to automatically record all calls in MIUI without pressing a button each time. 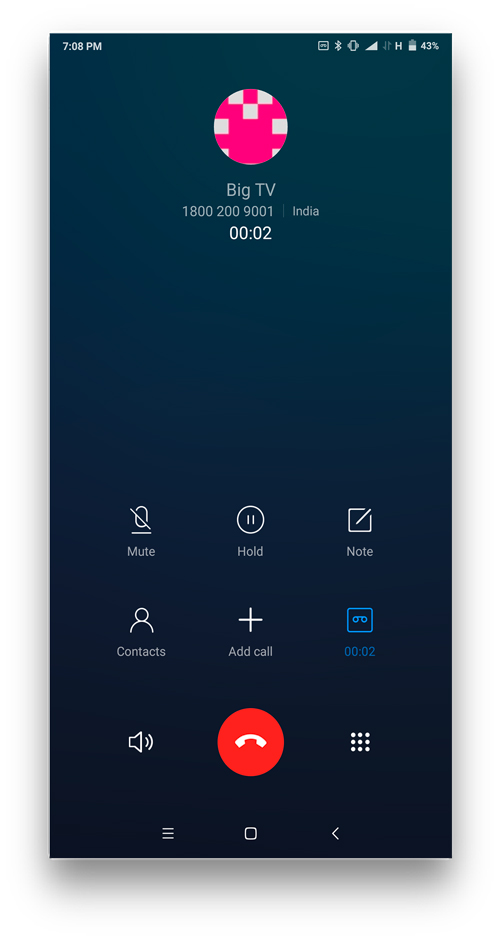 Another overlooked feature of Xiaomi is WiFi password sharing, say, a friend came over and ask for your home’s Wi-Fi. If you have a phone running Stock Android, you either tell them the password (could be risky) or type it yourself into their phone (which is boring). 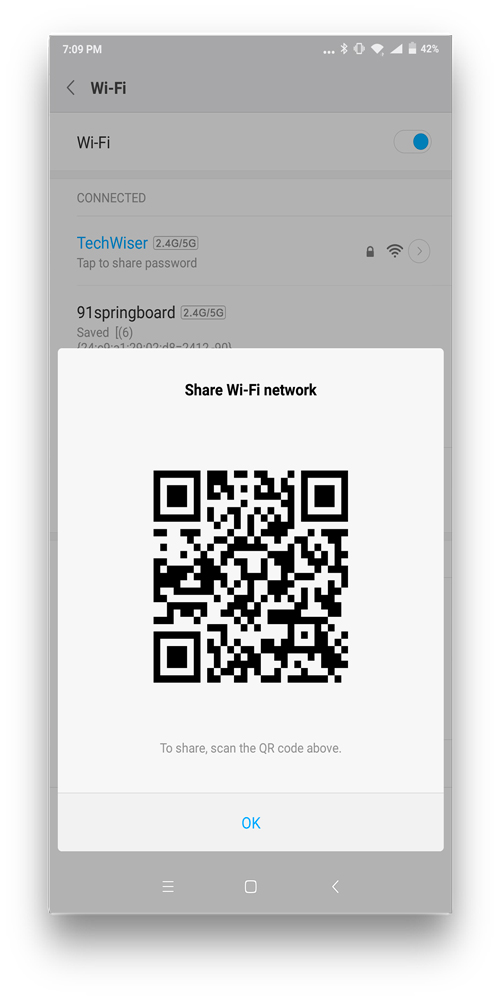 On a Xiaomi device, you and simply tap on the WiFi name and it’ll generate a QR code. Simply ask your friend to scan it with their device camera app, and they are connected. Most devices these days have a QR code scanner built-in the device’s camera, including iPhones. In fact, even iPhone lets you share WiFi password over the air. It’s about time that stock Android should have it too.

If I have to send a WhatsApp conversation or Instagram feed, just use the 3 finger swipe and tap on scroll option to generate a long screenshot. Yes, if you are sending it over WhatsApp, you need to send it as a file rather then image, or it’ll compress the hell out of it. But, that’s not the point, in fact, I would love to see scrolling screenshot feature on stock Android.

Another super handy feature for bigger phones like the note 5 pro or the Mi Mix 2 is the native gesture support. Once enable format the settings, it’ll hide the navigation button from the bottom of your screen (giving you more screen real estate) and now you can move around by swiping from the left or right to go back. Swipe from bottom to go home or swipe from the bottom and hold to open multitasking. 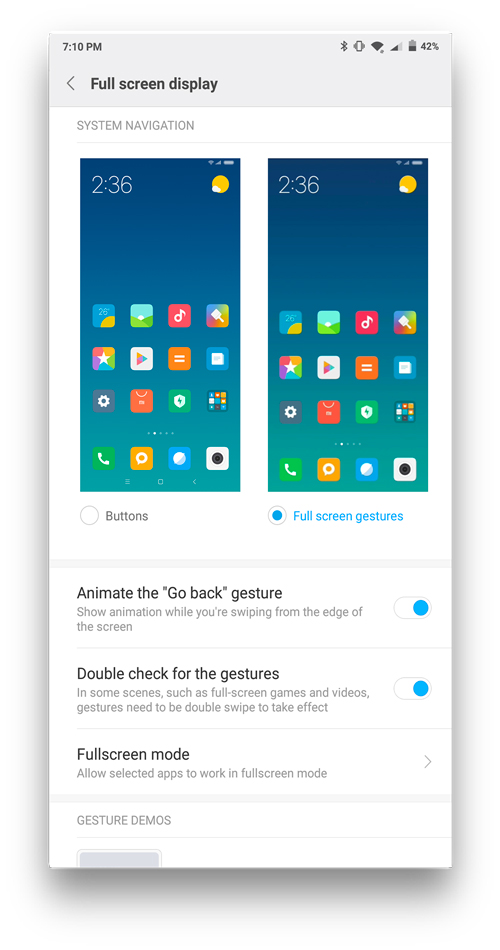 You can get the same results by using apps like fluid navigation. But have a one-tap option in the Settings is always welcomed.

My favorite feature on MIUI is built in App Locker. On Xiaomi phones, you can lock the apps and unlock them by the pattern or fingerprint. Unlike a third-party app locker apps, the native app lock-in MIUI doesn’t show a small preview when you first open the app. You can also hide the app’s recent screen so that nothing is visible from the multitasking window. And it’s not just for Android, I seriously want iOS to have this feature too, as of now, you can’t even use a third-party app lock on iPhones and iPad. 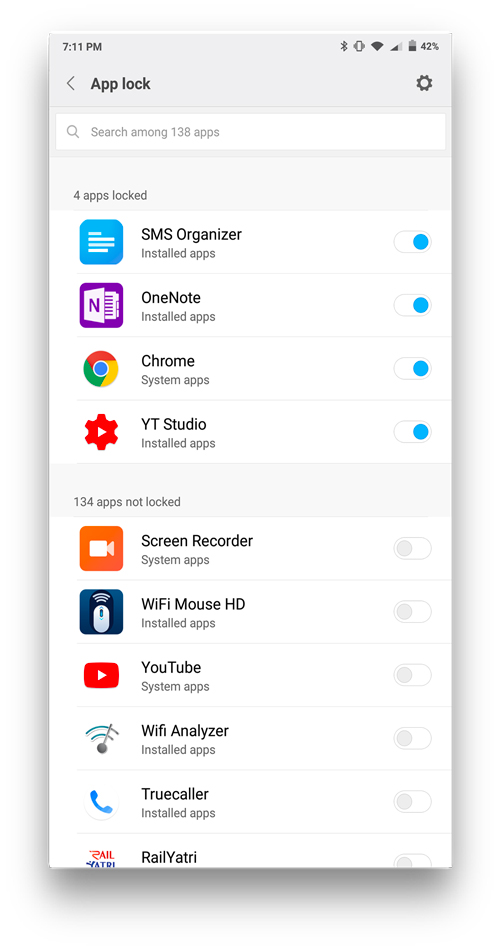 Stock Android is better than MIUI

While the notifications in MIUI isn’t all bad, but Google works really hard to give the best notification experience on your stock Android. On Xiaomi’s MIUI, to expand notifications, you have to use two fingers instead of one in Stock Android. 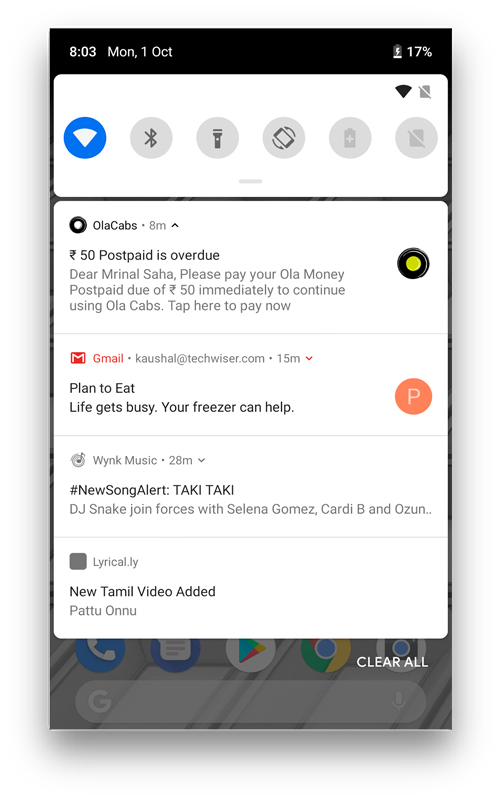 Another issue that I often face is MIUI is the unreliable Push Notification. There are times, when I get a late notification for WhatsApp or Instagram, even though these apps are on high priority.

There is no app drawer in MIUI, but that has never been an issue to me, as I use Nova launcher anyway. But when it comes to overall smoothness, the heavy skin of MIUI starts to lag. For example, Pixel will always be better than a Xioami phone since it’s also expensive, similarly, Note 5 Pro with 4 GB of RAM will be better than Moto E4 with 2 GB of RAM. However, if you compare two phones on the same hardware, you can clearly see Stock Android will be faster and smoother than any custom ROM.

Similarly, the RAM management is still better on Stock Android over any skinned ROM including MIUI.

My favorite thing about Stock Android is not having to deal with unwanted crap. There are no unwanted pre-installed apps on the most phone running pure stock Android. Yes, there are few Google apps like Keep, Google Books, Google Fit etc, but most of them are useful to me.

Similarly, Xioami’s MIUI 9 and 10, doesn’t have too many unnecessary apps as it used to have 5 years ago. 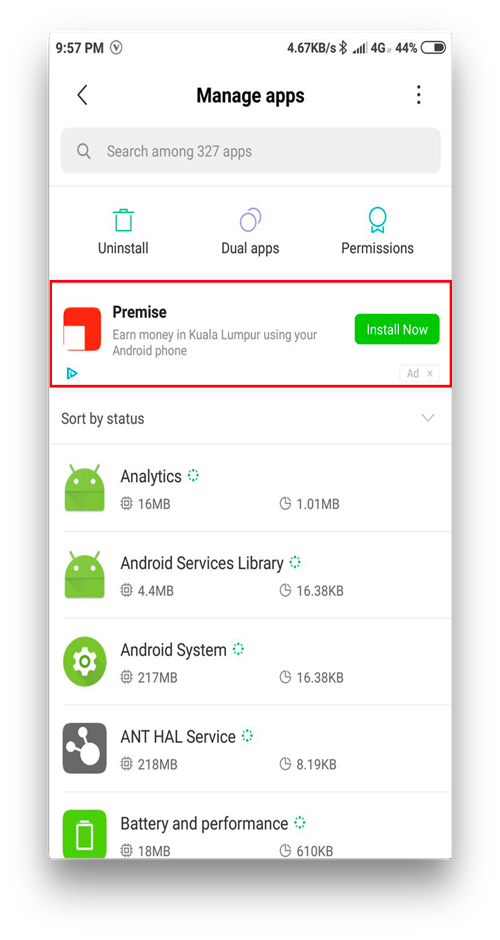 But what bugs me the most is the ads. Yes, for all those who don’t know Xiaomi display ads in their propriety apps like the built-in gallery, music player, notes, themes etc. and even in the Settings page. Earlier I thought it was due to some malicious apps that I’ve installed. However, Xioami recently confirmed it in this tweet.

We would like to inform you that the ads are placed in a manner to avoid any conflict with the actual functioning of the app. However, we will take your feedback into consideration and will always strive to give our customers the best user experience.

Off course you can disable the ads from the Settings, however, this is one big led down for me, and most probably the reason, I’ll switch back to Pixel 3 or Oneplus 6T (when it comes out).

Xiaomi likes to update their phones on the device to device basis; which is basically a minor improvement from the previous version without updating the core Android version. For example, I switched to Note 5 over a year ago, and over a year it has received 2 major updates, MIUI 9 (Nougat) and MIUI 10 (Oreo). However some cheaper Xioami devices although receiving MIUI 10, they still run on Android Nougat. 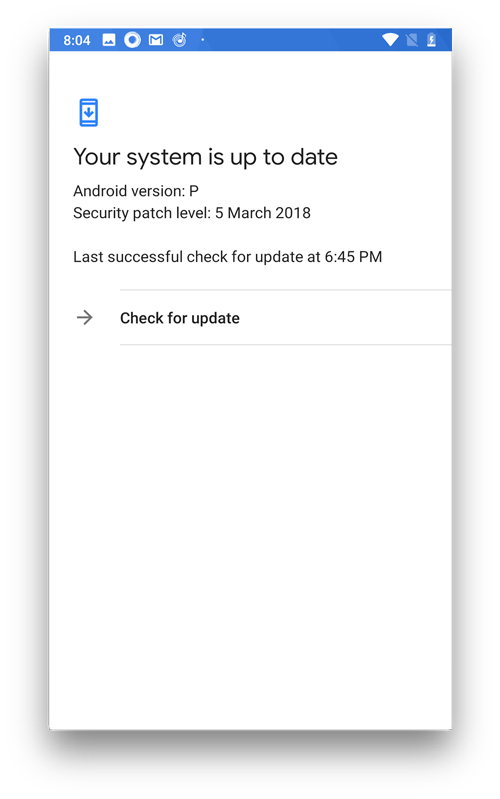 Stock Android, on the other hand, is much better than any Custom ROM when it comes to updates. My Google Pixel is running on Android 9. And it’s not just Pixel, the other stock Android I’ve used in the past like Moto G and E, all receive more security and version updates than MIUI.

If there is a security threat, Google can quickly figure out a patch and offer an over the air push update to all it’s used within 24 hours. However, custom ROM like MIUI needs a make tweaks specific to their skins, thus leaving your phone vulnerable. If security is a major concern for you, then definitely go with Stock Android. It’s not like Custom ROM are insecure, but Stock Android has a quick to fix and always stay up to date.

While Camera hardware is undeniably important when it comes to taking a great picture, the Google Camera app also plays an important part for features such as HDR+ and portrait mode. 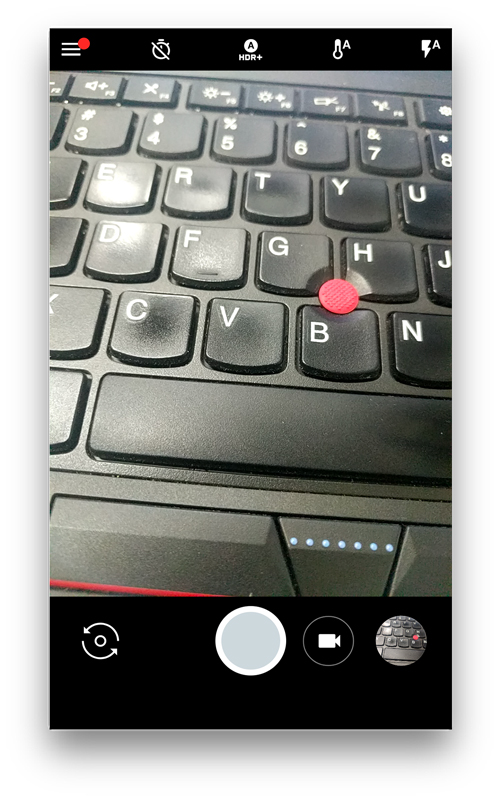 As of now, to get Google camera on the most non-stock android phone, one can use camera2 API. However, after recently updating to MIUI 10, camera2 API doesn’t seem to work anymore. This could be a major bummer for people, like me who rely on Google camera.

Like everything else, both ROMs have their pros and cons. MIUI comes with more features out of the box than Stock Android like Call recording, WiFi password Sharing, Dual apps etc. But you also have to live with some bloatware and see ads in Settings (which can be removed as well)

Similarly, you can get all of these Xiomi Native features on Stock Android with a third-party app, but where Stock Android really shines is overall software optimization and RAM management. There is no bloatware and the UI is much smoother.