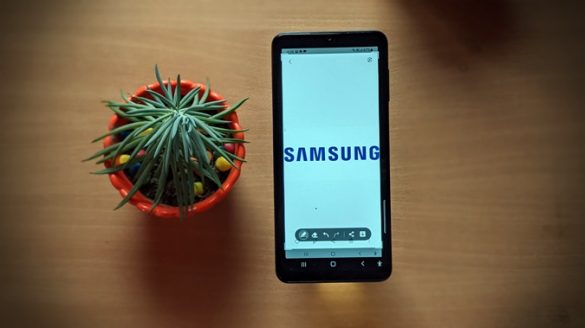 Tips to Take a Screenshot on Samsung Galaxy Phone

The usual way of taking a screenshot on any Android phone is to hold the Power and Volume down buttons together. You will hear the screenshot capture sound when a screenshot is taken. Apart from that, there are a couple of ways to take screenshots on Samsung phones that are mentioned below along with other useful tips.

1. Use Voice Assistants to Take a Screenshot

If you are interested in taking a screenshot on a Samsung Galaxy phone (or any other Android phone) without the Power button, you can take the help of voice assistants such as Google Assistant or Bixby. Go to the screen whose screenshot you want to take. Launch the preferred voice assistant using the set button or by saying ‘Hey Bixby’ or ‘Ok Google’. Then say or type the command ‘Take a screenshot’. You will be notified that the screenshot has been captured which can be found in the Gallery app.

2. Use Edge Panel for Screenshots

Another way to take screenshots without Power button on Samsung phones is by using the Edge panel feature. It’s a handy feature that is available in the newest Samsung Galaxy phone models. When Edge panel is enabled, you will find several panels consisting of various apps and features hidden inside the selected edge. You need to swipe on the panels to switch between them.

One such panel is the Smart select panel that helps in capturing custom screenshots. You can capture rectangular or circular screenshots.

1. First, make sure Edge panel is activated on your phone. For that, go to Settings > Display > Edge panels. Enable the toggle next to Edge panels.

2. Tap on Edge panels text to go to its settings. Tap on Panels to enable Smart select panel.

3. Make sure Smart select panel is enabled. Go back to the Edge panels settings and tap on Handle to change the handle’s position and style.

4. Once enabled, you will see the Edge panel handle on the selected edge. Swipe inwards from that edge to open the panel. Then swipe right or left on the panels to find the Smart select panel. Tap on Rectangle or Oval smart selection tool.

5. The selection box will open. Use the corners to change the size of the box. Hold and drag the box to change its position. When the appropriate part of the screen is inside the box, tap on Done.

The Smart select tool also lets you capture a GIF. Tap on the GIF (Animation) option in the Smart select panel for that. The Edge panel can be used to create shortcuts to launch two apps in split-screen view as well.

You know those situations when you have to copy the text in one app by looking at the text in another app. That’s where the screenshot pin feature comes in handy.

Available in the Smart select panel inside the Edge panel, the Pin to screen feature lets you capture a custom screenshot that stays on your screen – on top of the other apps in the form of a pinned image. You can move the pinned image around or minimize it. Basically, you can easily see and copy the text from the pinned image to your app. When done, just close the pinned image.

The captured image will show up on top of all apps. Open the required app and copy the text from the pinned image. Tap on the image to reveal various options such as minimize, expand, or close.

Interestingly, Samsung lets you choose the image format (JPG or PNG) in which you want to save your screenshots. To change the default format, go to Settings > Advanced > Screenshots > Screenshot format.

Screenshots take a lot of storage space on our phones especially when we don’t delete them and they keep piling up. To save space, Samsung offers a setting where the screenshot is automatically deleted after you share it using the screenshot toolbar. To enable this setting, visit Settings > Advanced > Screenshots. Enable the toggle next to Delete shared screenshots.

To use this feature, perform the following steps:

2. When the screenshot toolbar appears, tap on the Edit icon.

3. Look for the blue selection icon and tap on it. The automatically detected image will pop up. Use the edges to adjust the size if required. Hit the Save button in the toolbar to save the image.