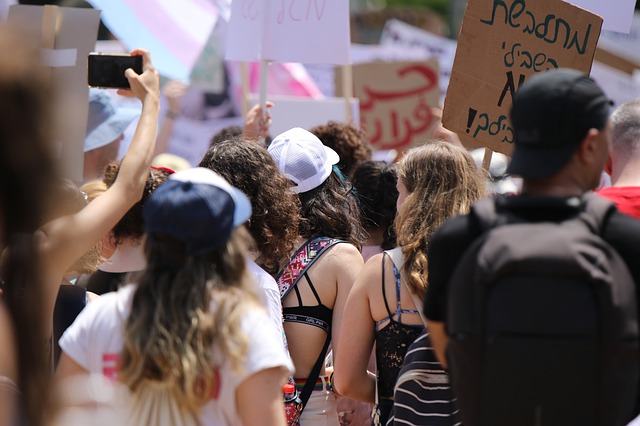 Although it’s rightful to show support to the Black Lives Matter movement, it’s not safe to be outside both in terms of health and safety. Don’t worry you can install several apps that help you be a part of the protest but with a wee bit more security and safety. Apps like Signal have a face blur tool or Google’s Sodar which helps in social distancing using AR. Without further delay, lets jump right in. Here are the ‘Top Apps for Protestors for iOS & Android’.

Read COVID-19 Apps to Stay Updated About the Pandemic

Signal, the popular encrypted messaging app, has recently introduced the “Face-Blur” tool in the app at the time when thousands of people are protesting across the U.S. over the killing of George Floyd. This privacy-centric feature enables you to instantly blur any picture. To use the feature, all you have to do is click a picture and use the chequered option at the top. It automatically detects the face and blurs it. You can also draw in case you want to blur an additional space. The best part is you can pick any picture from your gallery and use this tool.  So the next time you’re clicking a picture with your friends but you want to keep their identity hidden, you know exactly what to do. 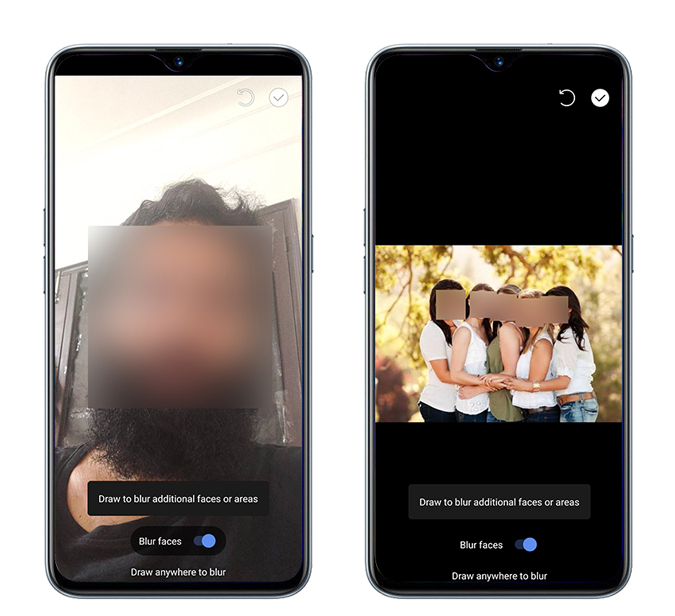 When you click a picture, you are not only capturing the moment but other information, such as your location, date/time, camera settings, etc. These make it fairly easy for authorities to track you down and ascertain your identity.  An easy way out is to erase all the metadata(EXIF), which can be done manually, however, using an app gives you more options.

This app not only lets you remove details of a single picture but also multiple photos and even an entire folder. This way you can easily share multiple pictures of the protest. The best part is that the app also lets you click pictures. The app removes the metadata automatically, so you can share it straight away. Besides that, you also have the option to create new copies for each process. The only drawback is that the app is available on Android, but you can try a similar app for iOS.

Get Image Scrubber for  Android and iOS 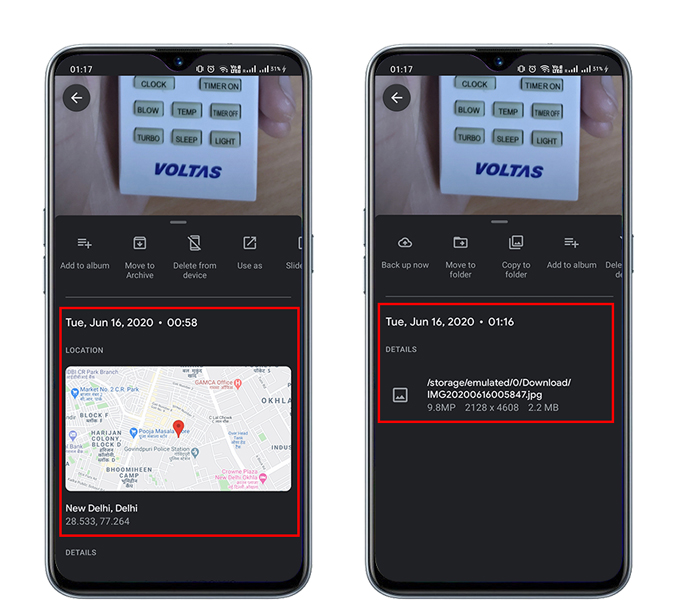 With over 5 million active users Citizen App surged past news apps like Twitter, CNN, Fox News, The NY Times, etc on Apple Store recently. The app which is not only for protestors but can be very useful for normal citizens as well notifies the user of any mishap, violence, demonstration near the user’s location. This was you can instantly get public safety alters and live data and news at your fingertips. For example, if someone calls 911 about a mass shooting near the area you’re headed. You’ll already get the notification so you can refrain from going there. In addition, a user can also live-stream an incident. This is of great help to identify miscreants or visually alter other users about the situation.

All of this information is delivered by keeping a tab on 911 dispatches and placing them all in an interactive map in the app. The app works great if you want to be aware of you surrounding, but since it’s only restricted to several U.S cities, you still might have to rely on local news and radio. 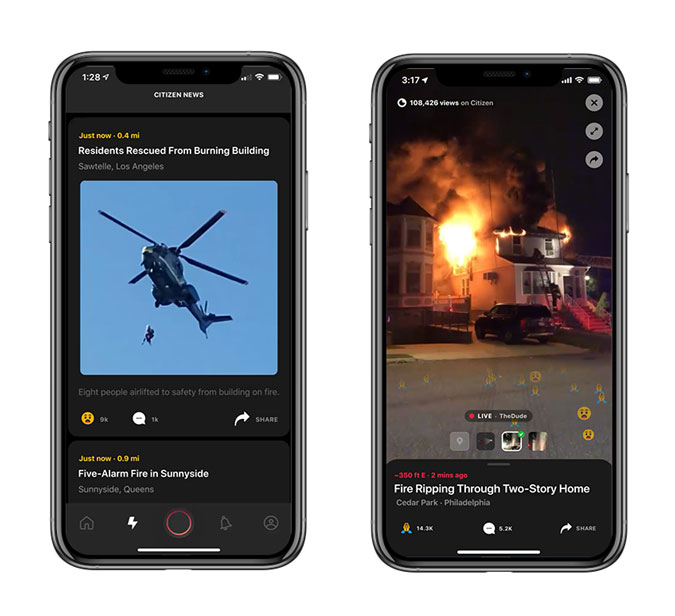 You really cannot predict when a protest can take an ugly turn. If that happens, chances are you are left with no time to call and inform your friends and family about your whereabouts. This makes having an SOS App on your phone at all times necessary. Both iOS and Android have a native option.  All you have to do is press the power button three times, which activates the SOS and makes a call to the assigned emergency contact.

However, to take the safety quotient up, you can try the Parachute app which lets you share location, audio, and video with your contacts in a single tap. Besides, it also texts and emails your trusted contact for more safety. The best part about this app is that everything is done on a discreet level even the video recording, so others won’t have the slightest of the idea. The only issue is that it’s only available on iOS and comes at a monthly cost of $9.99 with a 30-day trial period.

Get Parachute for iOS 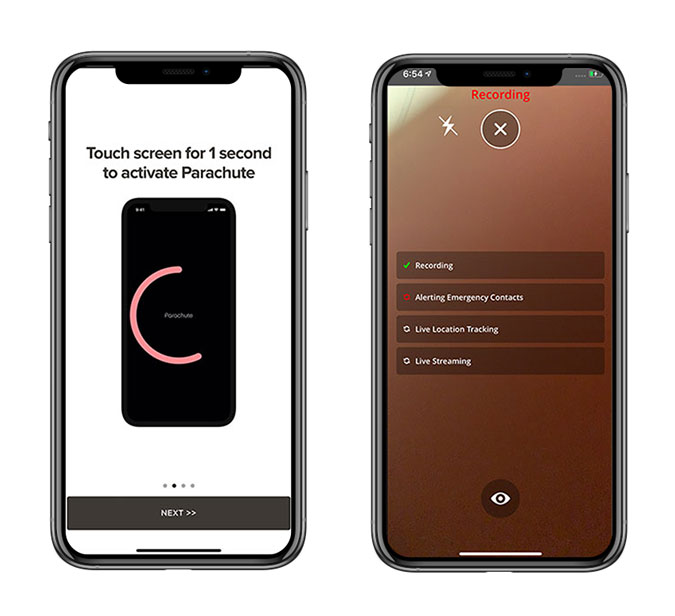 Hong Kong protests saw a surge of Offline messaging services and one of them which was widely used was Bridgefy. Unlike WhatsApp which relies on data,  Bridgefy lets you do that without any use of the internet. It uses Bluetooth and connects users up to a distance of 330 feet. There are essentially two modes you can use. Person to person is purely for private chats when you have to talk to a single person or Mesh mode, which increases the range by using multiple handsets to create a web of connections, which then lets you connect to users more than 330 feet.

There is also a Broadcast Room, where you can talk to every user who is close to you even without adding them to your contacts. This is particularly great for coordinating with a large group when you don’t have their contacts.

Get Bridgefy for ( iOS | Android ) 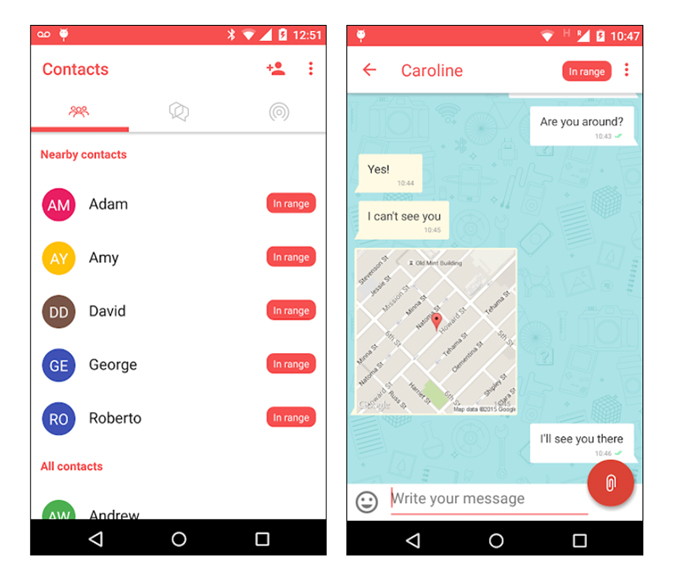 With so many people around you, standing in a queue for the loo might be the last thing you want to do. Hence, it’s always handy to check public restrooms in the area before showing up for a protest.

As the name suggests it shows you both sit & squat style bathrooms near your current location with an interactive map. Not just that,  depending on the availability you can also filter the results if you are looking for free toilets, handicap friendly or one which has a baby changing table as well. As most restrooms are highly unhygienic or can be dirty you can also read reviews before you reach there,  before it’s too late to find an alternative. The app is free and it doesn’t require you to sign-in, to find restrooms.

Get SitOrSquat for ( iOS | Android ) 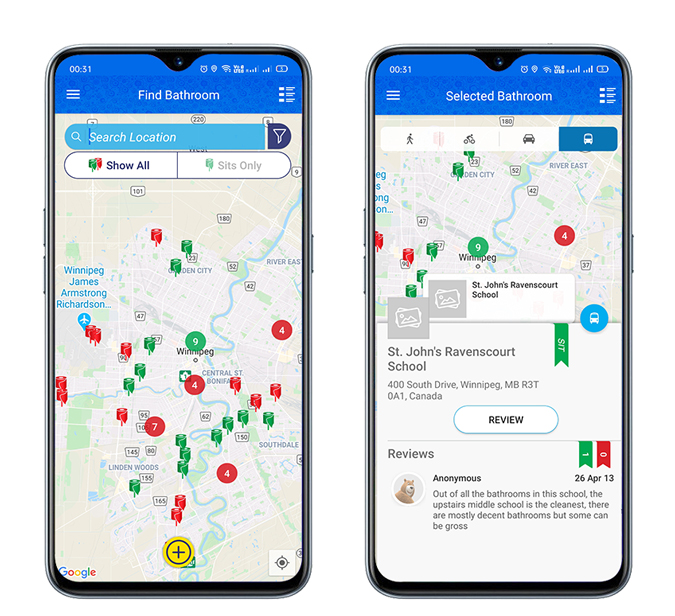 Sodar is an AR web app by Google,  which uses WebXR to project a two-meter radius ring around you so you can maintain social distancing. It uses the phone’s rear camera and superimposes this ring as you walk or move, which comes in handy when others are also using it alongside you.

To use Sodar, head to sodar.withgoogle.com, and tap on launch. Select allow when you’re prompted, “create a 3D map of your surroundings and track camera positions”. Scan the ground and you’re done. You’ll see a white 2m visualization projection on the ground which can guide you all along the way. Sadly this isn’t a mobile app, so you always have to open it in your browser and it’s not available for iOS.

Note: This might not work with older phones and you also need to keep your Google ARCore updated. 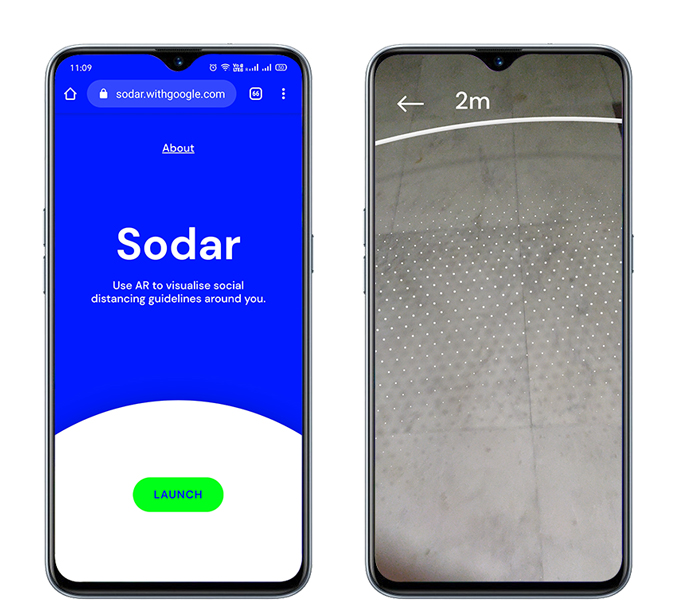 The recent witness video of George Floyd’s is a reminder of constant police brutality citizens have to face. To curb this excessive use of force, the American Civil Liberties Union have launched Mobile Justice App which helps you defend yourself and keep a check on law enforcement misconduct wherever you are.  It has three primary functions Record, Witness and Report. If you see an incident around you you can record it straightaway which will be directly sent to ACLU, so there are no chances of you not being able to upload or lose it. You can also use the witness button to broadcast the location to see where an incident is taking place. In case you just want to report an incident without actually recording a video, the report feature comes in handy. You can feed details of the incident which is submitted to the local ACLU for review.

So long as we have enough people in this country willing to fight for their rights, we’ll be called a democracy – ACLU founder Roger Baldwin

This app can also be used by immigrants and U.S citizens alike. The Mobile Justice App is currently available in 18 cities across the U.S. and comes free of cost. 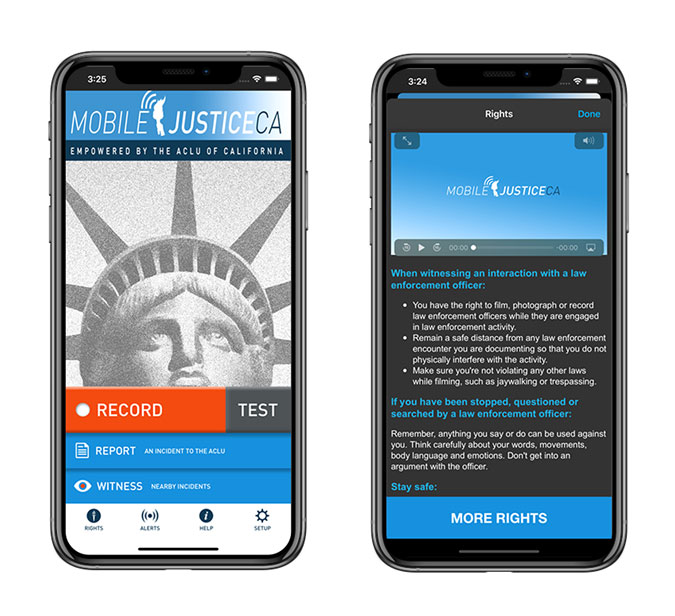 iProtest helps you with useful information such as what to take to a protest, first-aid toolkit, what to do when arrested, etc. The app is very simple to toggle. At the homepage, you’ll find all the info you need to know and do, Before the protest, Whilst the protest and post protest.

I wish it had a bookmark page option, which would’ve made it great for quick reference of useful information. But since it a well-designed app and informative app, I can give this one a pass. Also, it doesn’t rely on the internet, you can access the info anytime.

Get protest for Android 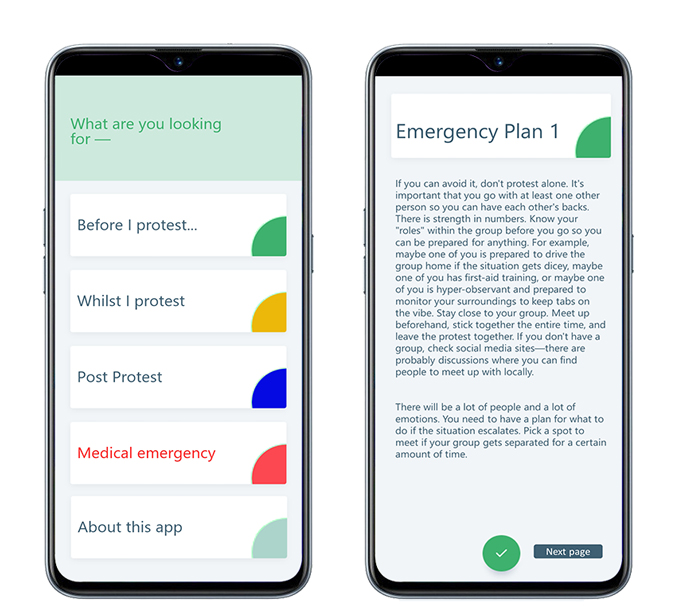 10. I’m getting pulled over (Siri Shortcut)

First off, it’s meant to be used when you’re being pulled over. However, when you’re in a protest this might work as a body cam alternative which will help you record the incident slyly with the front camera. This isn’t a native function but it works with the Shortcuts app on the iPhone. Once installed, you need to run it manually the first time. As soon as you activate the shortcut, it lowers the volume and the brightness and puts the phone in DND mode. Next, it’ll send a text message with the location to a contact of your choice and e-mail the videos to the assigned e-mail.

The only issue or limitation I found is that, you need to unlock your phone before it can start recording the video, which might not be the quickest way when you’re in a middle of a situation.  Secondly, you need to manually stop the video to share it.

Get I’m Getting Pulled Over Shortcut 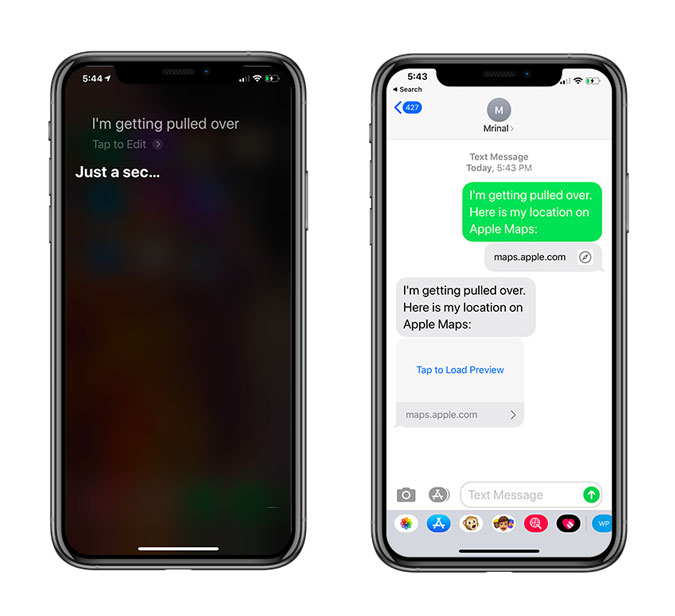 Well, I’d just suggest don’t go out until necessary. But since showing dissent is the precursor to democracy, I’d leave that to you. If there is one app I’d like to suggest, that’s Citizen, as it’ll keep you informed all the time regardless of where you are. Sodar by Google is also a great way to keep the COVID-19 at bay. If you have any more apps you’d like me to add. Do leave a comment.