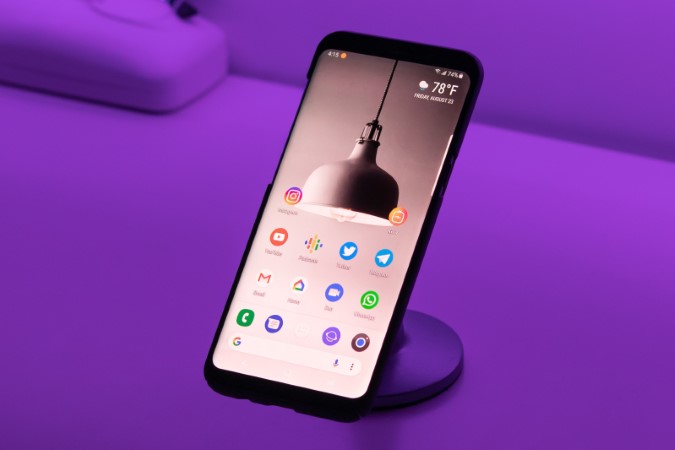 This may seem basic, but restarting your phone is one of the most effective ways to fix any temporary issues with it. If it’s nothing major, this should restore the missing app icons on your Samsung phone and save you a lot of time.

Press and hold the Power button to open the power menu. Then, tap Restart.

After your phone reboots, open the app drawer and see if the app icons are back.

One UI allows you to create app folders so that you can organize your apps and games better. If your missing app is inside one of the app folders, you won’t be able to find it in the app drawer.

Go through all the app folders on your phone and look for the missing app. Once you find it, you can drag the app out of the folder if you want.

One UI, like most Android skins, lets you hide apps from the app drawer. If you’ve previously hidden an app or game on your phone, here’s how you can unhide it.

1. Long press anywhere on the home screen and tap the Settings icon in the bottom right corner.

2. Scroll down and select Hide apps on Home and Apps screens.

3. Under Hidden apps, tap on the red minus symbol beside the app icon to unhide it. Then, tap Done at the bottom.

Another reason why an app, particularly a system app like Play Store, may not appear on your Samsung phone is if you’ve previously disabled it. If that’s the case, you can use the following steps to re-enable the app on your phone.

1. Open the Settings menu on your phone and navigate to Apps.

2. Scroll down or use the search tool to locate your app on the list and tap on it. Then, tap the Enable option at the bottom.

Once enabled, the app should appear in the app drawer.

5. Use Play Store to Check If an App Is Installed

If the app icon missing issue is limited to just one or two apps, you need to make sure that you haven’t accidentally deleted those apps from your phone.

When you enable Game Launcher on your Samsung Galaxy phone, it automatically detects all the games installed on your phone and puts them in one place. This may lead you to believe that your downloaded games are missing from your phone.

If you want all your games to appear in the app drawer, disable Game Launcher by navigating to Settings > Advanced features > Game Launcher.

7. Fix Issues With Custom Icon Pack or Change It

Are you using a custom icon pack on your phone? If so, some of your app icons may appear differently or may not appear at all. Here’s what you can do to fix it.

1. Long press on your icon pack app and tap the info icon from the menu that appears.

2. Go to Storage and tap the Clear cache option at the bottom.

If clearing the icon cache does not help, try switching to your phone’s default icons and see if that fixes the issue.

At times, problems with your phone’s default launcher app can also cause app icons to disappear. Most of the time, you can fix such issues by clearing the temporary files collected by the launcher app.

1. Open the Settings app and go to Apps.

2. Scroll down to locate your launcher app on the list and tap on it.

3. Go to Storage and tap the Clear cache option at the bottom.

If clearing the cache does not help, there might be an issue with the launcher app you’re using. Perhaps a recent update has messed up app icons, or the launcher app is failing to detect your installed apps for some reason. You can try changing the default launcher app on your phone and see if that works.

1. Open the Settings app and go to Apps.

3. Tap on Home app and select a different launcher from the following screen.

Can I open an app that’s missing from the app drawer?

You can use Google Assistant or Bixby on your phone to quickly launch an app that’s missing an icon. To do so, summon your virtual assistant and say the following command out loud to launch the app: open [app name].

How to enable the app drawer icon on a Samsung Galaxy phone?

Tap and hold anywhere on the home screen and select Settings. Then, enable the toggle for Show Apps screen button on Home screen.

Are You Missing What’s Important