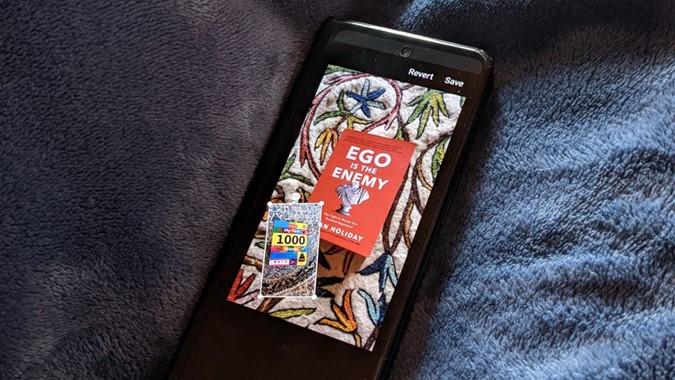 You may have seen images where a single image has multiple pictures on it. No, I’m not talking about collages but pictures where you have single or multiple images randomly placed on the main picture. This is possible by adding a picture on top of another picture. You can use it to add a watermark, or logo, or to simply combine images. Let’s check two ways to put a picture on another picture on Android phones including Samsung Galaxy phones.

If you own a Samsung Galaxy phone, thankfully, you don’t need to download any third-party app to paste a picture on another picture. That’s because the pre-installed Samsung Gallery app offers a native feature to place an image over another image.

Note: The Samsung Gallery app is available only on Samsung Galaxy phones. You cannot download it on other Android phones.

2. Open the first image i.e., the background image on which you want to add another image.

3. Tap on the Pencil (Edit) icon at the bottom.

4. The editing screen will show up. Tap on the Smiley icon.

Tip: Learn how to use the editing tools in the Samsung Gallery app.

5. You will see different options like Draw, Stickers, and Text. Tap on Stickers.

6. You will be able to add different types of stickers. However, since we need to add a picture to our image, tap on the Gallery icon.

7. Now, select the photo you want to add to the background image.

9. The image will be put on the background picture. Touch and hold the picture and drag it to change its position. Or, use the corner edges to increase or decrease the size of the picture. If you want to delete the newly added picture, tap on the (-) red remove icon on top of the image.

Tip: Check out other cool features in the Samsung Gallery app. Also, learn how to make a collage on a Samsung phone.

If you own a non-Samsung phone, you can use third-party apps to put a picture on another picture. We have covered the steps for two popular image editing apps i.e., Picsart and InShot.

Note: This method will work on Samsung Galaxy phones as well.

Use Picsart to Add a Picture on Another Picture

The Picsart app allows you to add multiple images to one picture. You can edit the foreground pictures and crop or add effects to them. Here are the steps to add a picture to another picture using the Picsart app on Android:

1. Download and open the Picsart app on your Android phone.

2. A sign-up screen will show up. You can create an account or press the Skip button at the top.

3. Tap on the Add (+) button at the bottom and select Edit a photo from the list.

4. Choose the first photo on which you want to place another picture by tapping on it.

5. Scroll through the editing tools at the bottom and tap on Add photo.

6. Select the photo to add to the first picture. You can select up to 10 photos. Once selected, tap on the Add button.

7. The images will show up on your main picture. Touch and hold a picture and drag it to reposition it or use the double-sided arrow icon on the picture to resize it.

Note to Gaurav: The images appear weird because Picsart doesn’t allow to take screenshot for these steps.

Similarly, you can crop, flip, or rotate the image. You can even add a shadow effect, change lighting conditions, or add effects to the picture. Furthermore, you can add a border or frame and even crop the foreground picture according to a specific shape.

9. When you are happy with the picture, tap on the checkmark icon at the top.

10. Then, tap on the Download icon at the top to save the image to your phone.

Use InShot to Place an Image on Another Image

InShot is an amazing photo editor which also doubles up as a video editor. Follow these steps to add a picture to another picture using the InShot app on Android.

1. Download and open the InShot app on your phone.

2. Tap on the Photo button on the main screen of the app.

3. Choose the background picture on which you want to put another picture.

4. Scroll through the editing tools at the bottom and tap on Sticker.

5. Tap on the Gallery icon followed by the Add button to insert an image from your phone.

8. When done, tap on the checkmark icon to close the sticker window.

9. Finally, tap on the Save button to download the final image on your phone.

Just like you can combine images on Android, you can add a picture on another picture on iPhone as well. Before you leave, know how to put two images side by side on Android phones.