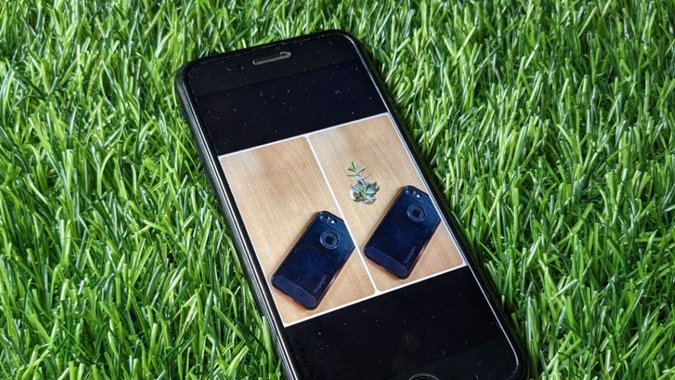 HashPhotos is a free app that lets you overlay a picture on another picture on iOS. You can use it to paste photo cutouts created in iOS 16 on another image.

Follow these steps to use the HashPhotos app to put a picture on another picture on iPhone:

1. Install the HashPhotos app on your iPhone.

2. Open the app and grant permission to access your photos.

3. Select the background picture on which you want to add another image.

5. Tap on Overlay image from the menu and select the image that you want to superimpose on the first image.

6. Use the pinch in and out gesture to resize the foreground picture or drag the picture to move it to a different position.

7. Tap on the Transparency icon at the bottom and use the slider to adjust the opacity of the image that you added.

8. Finally, tap on the checkmark icon at the bottom. You can then further modify the edited image by using the available tools like crop, flip, filters, lighting tools, etc.

9. When done, tap on the Download icon at the top. Select a size and hit Save a copy to save the new image on your iPhone. Do not tap on Save otherwise, it will replace the original image with the edited photo.

Pro Tip: You can also use the Snapseed app to insert a picture on another picture. For that, add the first image in the app, then go to Tools > Double exposure. Tap on the Add image icon at the bottom and select the second image.

1. Install and open the InShot app on your iPhone.

2. Tap on the Photos button under the Create new section followed by New on the next screen.

Note: After adding the picture, if you notice that the InShot app has added a frame or canvas to your picture, tap on Canvas at the bottom and select No frame. Hit the checkmark icon.

4. Then, tap on Stickers and press the Gallery icon.

5. Now, you can either add a regular picture or create a photo cutout where the app will automatically remove the foreground picture’s background.

To add a full-sized image, tap on the +(Add) icon under the Imported section and select Files or Choose from camera roll based on where your image is saved.

6. Alternatively, if you want to remove the foreground photo’s background and add it as a sticker, tap on the Photo cutout button. Then, choose the storage location of the image from Files or Choose from Camera roll. Select the image and it will show up in the Imported section.

Pro Tip: The ability to remove a photo’s background in the InShot app works in iOS 15 as well.

7. Once the picture or photo cutout shows up in the Imported section, tap on the desired picture to add it on top of the background picture.

9. Finally, tap on the Share icon at the top to save the image that has been superimposed with another image. You will find the new photo in the Photos app.

Tip: Learn how to use InShot app to edit videos on iPhone for free.

Here are the steps to use this shortcut:

1. Install and open the Apple Shortcut app on your iPhone.

2. Next, open the Overlay images shortcut link on your iPhone and tap on the Add shortcut button.

1. Open the Apple Shortcuts app and tap on the Overlay images shortcut.

3. Move or resize the picture using regular gestures, Or, tap on the Opacity button to adjust the transparency of the foreground picture. Finally, tap on Done.

4. Then, tap on Done again to save the final image to your iPhone or hit the Share icon to send the image.

If you are browsing your pictures in an app like Apple Photos, Files, etc., you can insert an image on top of another from those apps as well.

1. Launch the Apple Photos app on your iPhone.

2. Now, open the foreground picture. You can add it as it is by tapping on the Share icon followed by selecting Overlay images from the Share sheet. Then, jump to step 3.

Or, you can remove the picture’s background first by using the photo cutout feature of iOS 16. For that, touch and hold the part of the picture that you want to retain until a white glow appears on the image. Then, tap on the Share icon and select Overlay images.

3. The shortcut will start running. Then, select the background picture on which you want to add the picture selected in step 2.

4. Resize or reposition the foreground image and hit the Done button.

4. Tap on Done to save the image to your iPhone or use the Markup tool to draw on the image.

Tip: Check out other cool shortcuts for power users.

If you are an avid Instagram user, you can insert a picture on another picture while creating Instagram Stories as well.

To do so, first, copy the picture that you want to insert into a picture. You can even copy photo cutouts by removing a photo’s background in iOS 16.

Then, go to the story creation screen on Instagram. Select the background picture. Then, touch and hold anywhere on the picture until the text options show up. Touch and hold again on the typing area and select Paste from the menu. The copied picture will be pasted on the existing picture.

Hit the three-dot icon and select Save from the menu to download the image to your phone.

Tip: Learn how to change your Instagram story background.

Those were different ways to add a picture to another picture on iPhone. Apart from that, learn how to put two pictures side by side in iPhone. Also, know how to combine multiple pictures into PDF on iOS.