Home » Android » 7 Ways to Unblock a Number on Samsung Phone

7 Ways to Unblock a Number on Samsung Phone 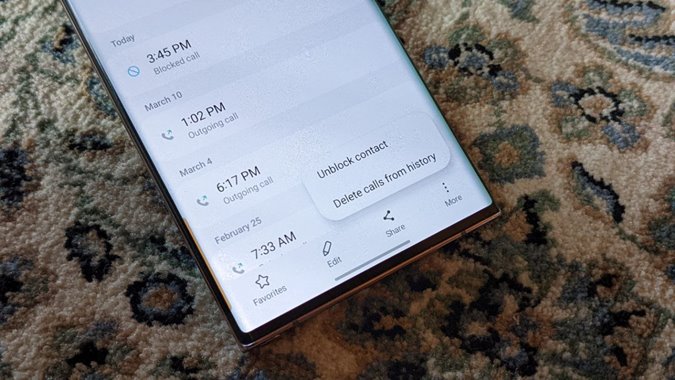 Blocking a number comes in handy when you don’t want someone to contact you. It’s a great trick to avoid someone. But what if you later decide to unblock the person or what if you unintentionally blocked someone? Thankfully, you can easily unblock a number. Let’s check various ways to unblock a number on a Samsung Galaxy phone.

How to Unblock a Number on Samsung Phone

You can remove a number from the blocked list on a Samsung phone in the following ways.

If you have blocked a number that is saved on your phone, you can unblock it via the Contacts app.

1. Launch the Samsung Contacts app on your phone.

3. Tap on the More (three-dot) icon and select Unblock contact from the menu. The contact will be unblocked.

2. Find and Unblock All Blocked Numbers

This method lets you find and view all the blocked numbers on your Samsung Galaxy phone. It also comes in handy when you want to unblock an unsaved or deleted phone number from your phone. You will be using the Samsung Phone app for this method.

2. Tap on the three-dot icon at the top and select Settings from the menu.

3. Tap on Block numbers. Here you will find a list of numbers that are blocked on your phone. Tap on the Remove (-) icon next to the number that you want to unblock.

2. Go to the Recents tab and tap on the number that you want to unblock. Press the (i) icon.

3. Tap on the More (three-dot icon) and select Unblock from the menu.

Another way to view the blocked list on a Samsung phone is from the Messages app.

2. Tap on the three-dot icon at the top and press the Settings option.

Samsung Galaxy phones offer a native feature to block spam calls from fraudsters, telemarketers, etc. If some number is wrongly identified as a spam number, you must try turning off the spam protection as shown below.

2. Tap on the three-dot icon and select Settings from it.

Note: If you don’t find Caller ID and spam protection under Call settings, tap on the Block numbers option.

Samsung also provides a feature to block unknown or private calls. If you don’t like that behavior, you can unblock private calls by following these steps:

1. In the Samsung Phone app, tap the three-dot icon and choose Settings.

2. Tap on Block numbers and turn off the toggle next to Block unknown/private numbers.

If a number still continues to remain blocked on your Samsung phone, you should take a look at the third-party calling or spam protection apps (like TrueCaller) installed on your phone. Unblock the number from such apps.

Even more importantly, when you block a number from the Contacts or Phone app, it will only affect the regular calls and SMS messages from such a number. The blocked contact can still call and message you via other apps installed on your phone such as WhatsApp, Telegram, Facebook, Instagram, etc. So, if you have blocked a person using any other app, you must unblock them on that particular app itself. Learn how to unblock someone on Facebook, Messenger, and Instagram.

1. What Happens When You Unblock a Number on Samsung Phone

When you unblock a number, you can then receive calls and messages from such a number. The other person won’t be notified that you have unblocked them. Furthermore, please note that you won’t receive any messages that were sent when the number was blocked.

2. Can You See Blocked Calls on Samsung

Yes, the blocked numbers will appear in the recent calls list if they try to call you. You will see the Blocked icon next to their name in the call list.

3. Can You Re-block a Number After Blocking

Yes, you can re-block a number multiple times after unblocking it.

Blocking someone is a harsh step. If you want to avoid someone, you can mute calls from one person. Also, if someone is bothering you on WhatsApp, you can remove them from WhatsApp instead of blocking them on your phone.