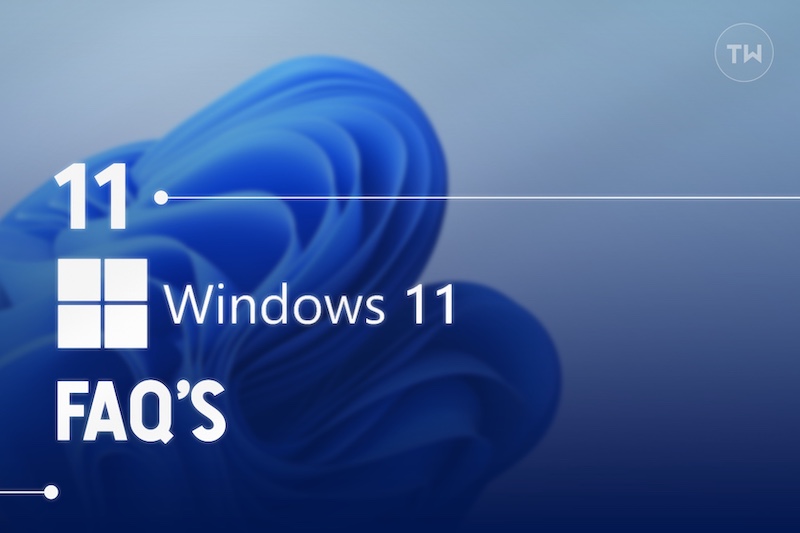 The next major version of Microsoft’s popular desktop OS, Windows 11, is around the corner. The ISO leaked a couple of days before the official release and has left everyone in a state of curiosity. Windows 11 comes with several new features such as the redesigned Start Menu, Dark mode, and quick snapping. We have already installed Windows 11 on our computer, and you can do the same without uninstalling Windows 10. But before doing that, you might have some questions and doubts regarding upgrades, price, official support, system requirements, and more and we are here to help. We have compiled some of the most common FAQs that you might find useful.

Note that these FAQs are based on currently available information on various platforms and what we know and conclude from our past experience about Microsoft and Windows. The event is scheduled for 24th June which is next week. Stay tuned for more details.

1. Will New Version Be Named Windows 11

Update: Yes, Microsoft named the next version Windows 11, and it is official.

Although Microsoft is just a week away from releasing their latest iteration of Windows OS, the name hasn’t been confirmed yet. However, everyone is calling it Windows 11 which makes sense.

In case you forgot, let us remind you about Windows 9. People were expecting Windows 9 after 8.1 but Microsoft named it Windows 10 choosing to skip a number. Although there were many theories why Microsoft jumped the sequence, they never confirmed anything.

It is worth noting that Microsoft has already announced the expiry date of official support for Windows 10 Home and Pro. Considering the history and past naming convention, it seems the new version will most likely be called Windows 11.

3. Can I Download/Upgrade Windows 11 for Free

Update: Yes, according to the official statement, you can upgrade from Windows 10 to Windows 11 for free.

As of now, Microsoft has not revealed price details or whether the upgrade would be paid or free. However, some experts believe that it will be a free upgrade for existing Windows 10 and Windows 8.1 users. However, you cannot upgrade from Windows 8 to Windows 11 directly. First-time or new users would of course need to buy a license.

4. What Will Be Price of Windows 11 License

It is still not confirmed whether Microsoft will continue using the same price structure as Windows 10 or not.

For your information, Windows 10’s Home edition costs around $139 whereas Pro edition is priced at $200. Check out the full pricing on the official website.

5. When Will Microsoft Release Windows 11

Update: Microsoft announced Windows 11 on June 24, 2021. However, there is still no official date on the stable version’s release. The update is expected to roll out from early 2022. If you are an Insider Preview user, you should be able to install Windows 11 Insider Preview sometime next week. You must opt for Dev Channel in order to get the update. However, Beta Channel users will start getting the same update from late summer. Meanwhile, prepare for the Insider Preview build and be ready when it rolls out.

The Microsoft event has been scheduled for June 24, 2021. Hopefully, the announcement and release date of Windows 11 would be the same. Although it is not confirmed, there is a chance that they can launch the beta version (Insider Preview) first as they did with Windows 10.

It is too early to say whether Windows 11 is better than Windows 10 or not since the stable version is yet to hit the market. Several major and minor feature updates over the past 5-6 years have polished Windows 10. Even if Windows 11 releases on 24 June, it might take some time to get rid of major bugs.

Based on the leaked ISO, the overhaul is minor and consists of UI enhancements here and there. It is yet to be seen whether Microsoft has planned any major updates or features for Windows 11 making it worth the trouble.

7. What Happens if Windows 10 Is Out of Date

8. Is It Worth Upgrading to Windows 11

Windows 11 has got several new features and a slightly new user interface. Talking about the features, you can find new themes/wallpapers, redesigned Start Menu and Taskbar, an in-built Windows Terminal, and so on. If you think these new options are more than enough for you, you should upgrade from Windows 10 to Windows 11.

It will be a major upgrade for Windows 7/8/8.1 users because Windows 10 itself is vastly different and comes feature-packed.

Although Windows 11 looks a lot like Windows 10X, Microsoft canceled it just last month. Windows 10X was intended as a lightweight OS for dual-screen devices while Windows 8.1/10/11 is for regular work PCs. Microsoft seems to have had a change of heart.

There is a small chance that you might get a compatibility issue because of Trusted Platform Module (TPM) 2.0 and Secure Boot support that are required to run Windows 11. Even the leaked Windows 11 ISO file requires TPM 2.0 and Secure Boot to be installed. However, it will be confirmed once Microsoft releases the official ISO.

11. Can I Update to Windows 11 From Windows Settings

Update: Yes, you can check for the update from Windows 10 Settings panel. Just press Windows+I to open Windows Settings, go to Update & Security > Windows Update, click the Check for updates button to find out if the update is available for you or not. However, your PC must meet the hardware or system requirements to get the update.

You may not be able to update to Windows 11 using Windows Settings. You might have to use the Windows Update Assistant or the Media Creation Tool to get Windows 11. The reason being this is not a regular upgrade but an OS version that requires installation instead.

12. What Are System/Hardware Requirements for Windows 11

However, Microsoft will temporarily allow Insider Preview users to install Windows 11 even if their systems do not meet the minimum hardware requirements.

Not today, but in the near future, Windows 11 will certainly replace Windows 10 because Microsoft already announced the expiration date of Windows 10 support.

Considering everything, it seems Microsoft will continue with Windows 11 for some time. However, up until October 14, 2025, you don’t have to worry.

14. How Long Will It Take to Install Windows 11

15. Is It Possible to Go Back to Windows 10 After Upgrading?

Yes, you can downgrade from Windows 11 to Windows 10 within 10 days. After that, you will have to perform a clean reinstallation of Windows 10. In that case, you have to back up your data before downgrading.

These are some of the most common questions about Windows 11 that we found floating around on the internet. Do you have more queries? Find us on Twitter and connect with us. We are always here to help.

Sudip is a freelance writer who has over nine years of experience in content writing. He loves to write about almost anything related to PC and mobile apps, how-to guides, tricks, and more.