Zebronics recently launched the Zeb Juke 9700 in India. Priced at INR 17,999 INR, the soundbar comes with 6 built-in speakers, a dedicated subwoofer, and Dolby Atmos. But is it worth it? Well, I’ve had the soundbar system for a couple of days, and here’s my full review of the Zebronics Zeb-Juke 9700.

Before we get into the review, if you are familiar with soundbars, you might know what to expect. However, if you’re searching for your first soundbar, let me break it down for you. I would look for 4 basic things in a soundbar in the following order of priority- Build Quality, Audio Quality, Connectivity Options, and the Remote. Moreover, since this is a Dolby Atmos soundbar, we’ll also talk about it briefly in the review. Let’s begin.

I’m not really fond of the packaging of the Zebronics Soundbar. It had an awkward L shape packing with the soundbar and subwoofer attached to each other. It was a chore pulling both of them out. In terms of inbox content, I was overwhelmed with the amount of stuff you get in the box. 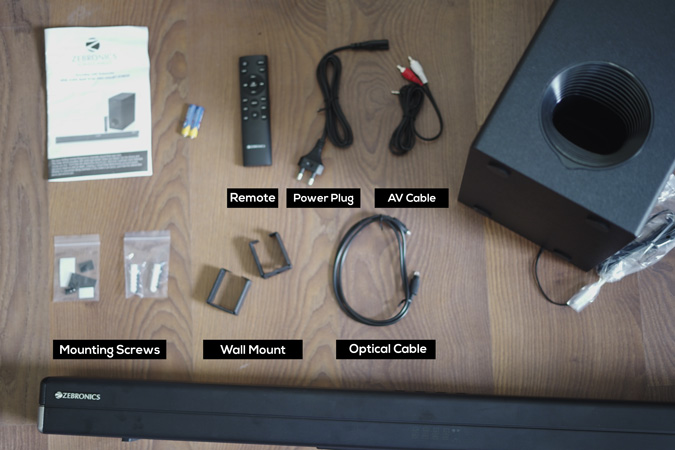 For the spec hungry people, below is a rundown of detailed specifications.

Foremost, the Soundbar felt quite light for its size. The weight of the soundbar and the subwoofer is almost the same. You have the option to either wall mount the soundbar or place it on a desk. In case you want to wall mount, the box includes all the stuff like 3M tapes, mounting clip, a few screws, etc. All you have to do is drill up the holes in the wall.  For desk set up, the lower portion of the soundbar has 2 anti-slip rubber feet. There’s also a metal housing at the center which keeps it lifted from the ground. 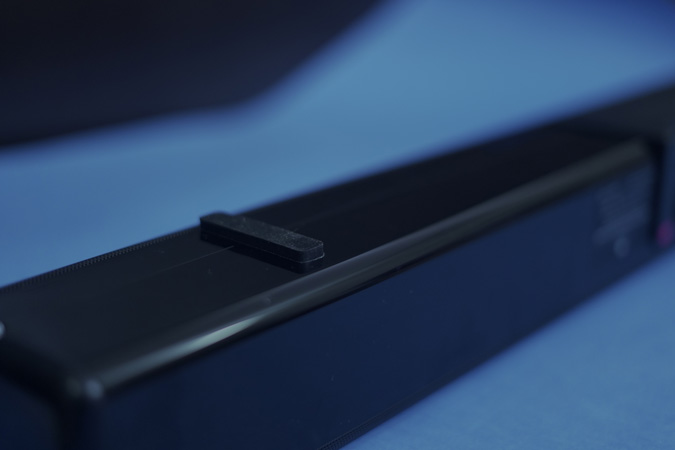 On the front, you have a Zebronics logo at the top-left and a “Dolby ATMOS” logo on the top-right. There’s a small LED display in the center. Surprisingly, it’s not at all visible until you turn on the soundbar. My only complaint was when you have audio playing or a connection established to a device, the LED can be turned off instead of displaying the connection mode.

On the top,  you have 4 buttons at the center – Power, Volume +, Volume -,, and Connectivity mode. The buttons have a good rubberized texture with a nice clicky sound. However, I found myself using the remote almost every time than the buttons on the soundbar. 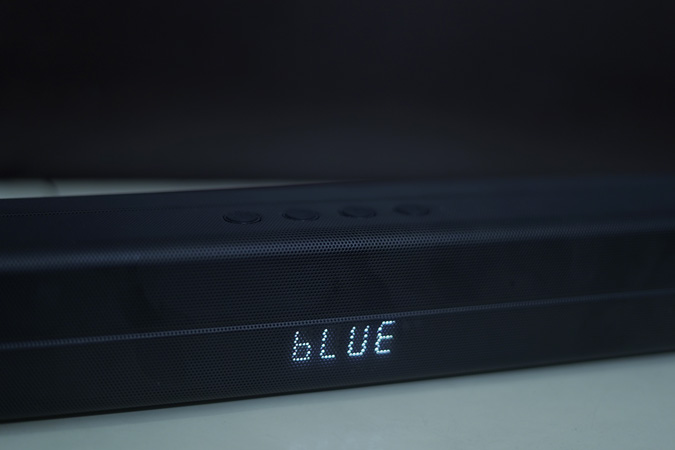 On the rear side, you have the buttons nicely tucked in. Apart from the AC power and Woofer port, there are 2 HDMI IN and 1 HDMI out (ARC) ports as well. Additionally, there’s an AUX, Optical, and a USB port. In case your TV or some of the other audio devices don’t have an HDMI port, you are thoroughly covered.

I liked that there’s no aggressive branding on the soundbar. It makes it look extremely sleek and subtle. The metal casing is also sturdy. I do prefer a fabric casing instead but that collects a lot of dust over time. If your TV room or hall has a lot of dust collection over a period of time, a metal casing soundbar is pretty easy to wipe off. 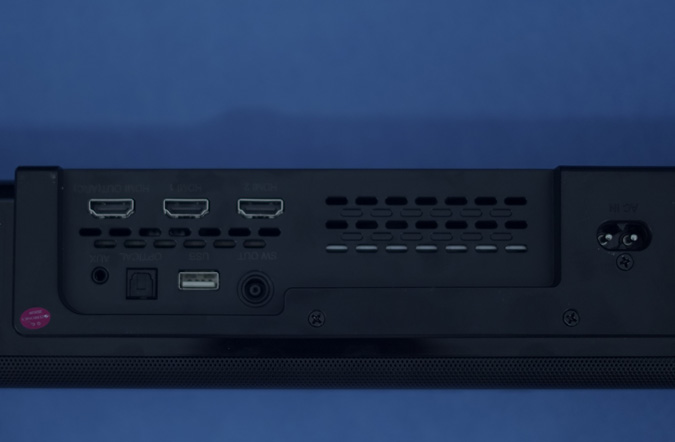 The Zeb-Juke definitely has a good built. However, sound quality is where most of your purchase decision would lie on. The Zeb-Juke 9700 features a 4 forward-facing driver and 2 upward facing driver in the soundbar. You also get a dedicated subwoofer to replicate the sub-bass frequencies and vibrations.

In terms of loudness, Zeb-Juke 9700 does a wonderful job. Our current studio lies in a 1000+ sq. ft area and the soundbar could easily cover the space on 60-70% volume. So, irrespective of the length of your hall, the soundbars have them covered.  In terms of audio quality, the soundbars do a good job. Foremost, listening to songs on these will definitely make you skip a beat. You have that thumping party bass with a lot of sub-bass from the subwoofer. You would really feel the vibration on the floor. In case you have a house party, the soundbars could easily be the DJ of the night. For music, I would give it a good 8/10. 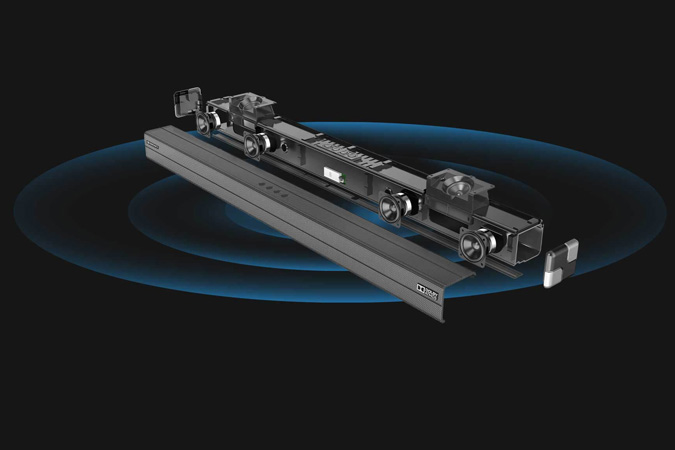 In terms of movies, I did watch a couple of movies and YT videos on the soundbar. The impression was kind of mixed. If you are watching a good thriller movie like “Joker” or “Andhadhun” where you have a lot of vocals and conversations, the soundbars do a good job. However, if you are watching an action movie like “Avengers: End Game” or “Extraction” where lots of noises fill the scene, the extra bass gets a bit boomy.

It’s hard to hear the conversations because the bass stays a bit long and overpowers the other frequencies. I ended up adjusting the volume frequently to hear the conversations and then not blow my ears with a sudden explosion. The problem can be fixed to an extent by adjusting the bass and treble on the soundbar. I tried adjusting the bass to the lowest i.e. -5 and it did get a tad better. However, I still feel there’s more for Zebronics to work on making the drivers more versatile or less boomy.

The Zebronics soundbar ofter a galore of connectivity options. This is by far the most I have seen on a soundbar. If you want to play Dolby Atmos, you have to connect it via a blue ray player, PC, or laptop. Also, do ensure that your TV has an HDMI (ARC) port for Dolby Atmos compatibility.

The Zeb soundbar also features Bluetooth and hence you can stream songs from your smartphone to the speakers. The pairing process is pretty simple. Just switch to the Bluetooth channel and connect your phone to the soundbar. Apart from these, you also get a USB port which lets you directly plug-and-play from a USB device. Although do keep in mind, the USB port is only for audio playback, it doesn’t support Dolby Atmos.

Remote is something that a lot of soundbars choose to omit. I’m glad Zebronics didn’t go that route. Although you can control the soundbar volume with your TV remote, for other options like changing connectivity channels or skipping songs, you have to head over to the soundbar every time. It’s a chore. The remote is quite feature-rich with the options to switch between different sound modes -Music, News, Movie, 3D.

You also have the Bass and Treble control buttons on the remote. I also liked the “Pair” button on the remote. It really helps when you have to disconnect the speaker from 1 Bluetooth device to connect it to another. There’s also a mute button to quickly cut down the volume when you have to attend the door or a call. Moreover, Zebronics also includes 2 AAA-battery for the remote which is a nice gesture. Most of the manufacturers tend to miss out on it. 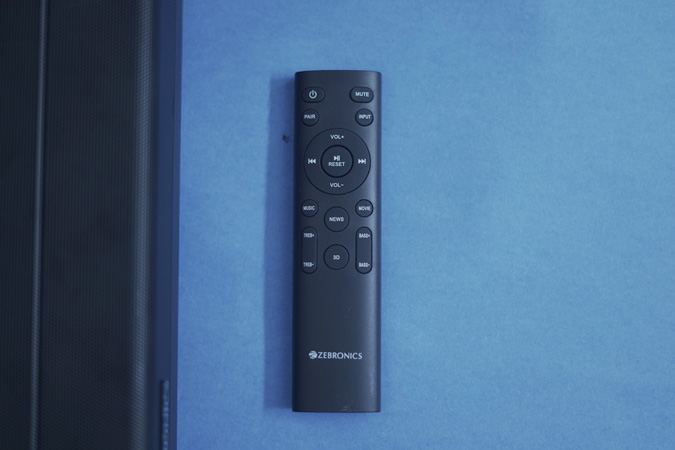 Zebronics boasts a lot about Dolby Atmos on the soundbars and it’s quite legit. It’s one of the few speakers in this range to provide Dolby Atmos sound. It also features Dolby TrueHD, Dolby Digital Plus, and Dolby Surround. However, purchasing it to watch Dolby Atmos audio is quite tricky.

In case your TV has an HDMI eARC port, you can directly play Dolby Atmos content.  However, if your TV has an ARC port, the maximum you will get is Dolby Surround Sound i.e. 5.1. In order to get Dolby Atmos with ARC port, you will have to connect a streaming device like Firestick 4k to the soundbar’s HDMI port and then connect the soundbar’s HDMI ARC port to your TV’s HDMI ARC port. This phenomenon is called the HDMI pass-through. The Zebronics Zuk bar supports 4k HDR pass-through.

Next, in India, only Netflix supports Dolby Atmos sound. On top of it, you need to have an UltraHD 4k Netflix subscription as well. YouTube, Disney+, HBO, Prime Video, and cable TV don’t support Dolby Atmos as of now.

The Zeb-Juke 9700 is probably the cheapest good sounding Dolby Atmos speaker you can buy in India right now. Hence, if Dolby Atmos is what you’re looking for then surely it is a good deal. For more issues or queries, let me know in the comments below.