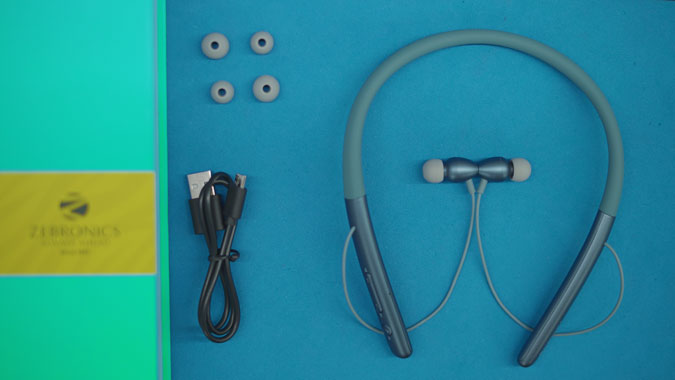 While I am still having fun with the Galaxy Buds, I got hold of the newly launched Zebronics Zeb-Soul. With a price tag of around 2700 INR, the specs looked quite impressive. To begin with, it has the Qualcomm CSR chipset along with AAC encoding, splash-proof, vibration motor, dual device pairing, etc. But the question is, how does it perform in real life? How does it fare against the competition like Samsung Level U, Mi and RealMe Neckbands? Well, I have had my fair share of time with it and here’s my full review of the Zebronics Zeb-Soul Wireless Neckband.

First, we will have a look at the specs of the neckband and the additional contents you get in the box.

Foremost, the box is huge and has the features are listed out all over it. Apart from that, you get a couple of extra ear tips, micro USB charging cable, and a user manual.

To start off, the neckbands looks well built. The in-hand feel of the Zeb-Soul wireless feels superior to the competition from Mi Wireless Neckband, Realme Wireless Neckband, Samsung Level U, etc. The neckband is made of rubberized material, quite flexible and the curve sits just right on your neck. Unlike the plastic neckband on the Samsung level U, I found rubber provides a better grip.

The latter part of the neckband is made of matte-finish plastic. It also comprises a volume up, volume down and a call button. The buttons have the same texture and I found them tactile enough. On the other side, you have a power button toggle which I would any day prefer over a clickable button. It’s pretty handy and you just have a look at the toggle to make out if the neckband is powered or not. Adjacent to the power button, there is an LED that notifies you of charging status and Bluetooth connectivity.

The earbuds are made up of metal instead of plastic which does provide more durability. Additionally, just like most neckbands, they also have a magnetic back to attach the earbuds when not in use. However, unlike the Realme Wireless neckband, it doesn’t pause the music. 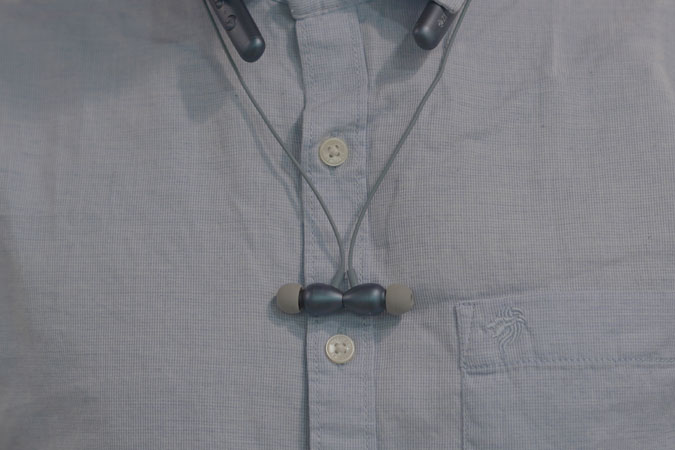 Straight up, I did like the audio quality of the Zebronics Zeb-Soul. Although it has a smaller 10 mm driver, it does get significantly loud. You will have a good time listening to vocals, podcasts, and interviews. In terms of music, I found them to be great in terms of lows and mids. The bass was ideal according to my liking, not really over-powering. So, if you are into that Beats by Dre thumping bass, you would be slightly disappointed. Having said that, the earphones really fall apart in the trebles. The sound in the higher spectrum seemed a bit harsh for my liking but it would be fine if you don’t nitpick. 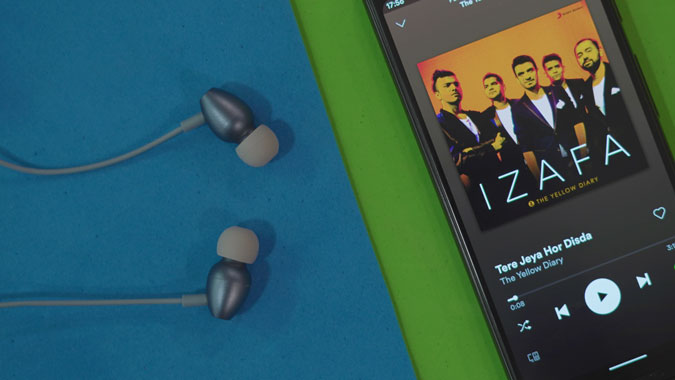 In my case, I would rate comfort just below Sound quality and it is of utmost importance for an audio wearable. What is good audio quality audio if you can’t wear them comfortably? Here, the Zebronics Zeb-Soul is a bit bummer. It gets quite uncomfortable on the ear auricles after a couple of hours of usage. The prime reason being the flat magnetic back of the earbuds. They sit right against the ear auricles when plugged in and cause pain after a while.

In this case, I prefer the Mi Earbuds design which avoids resting the earphones on your auricles. Additionally, the wire hoops are not adjustable and the device is splash-proof. 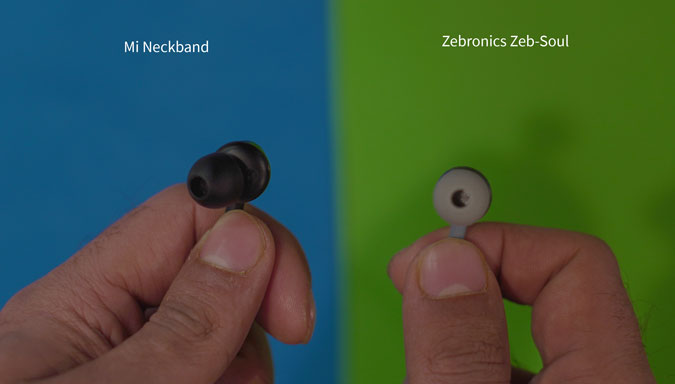 Another major reason, most people prefer the neckbands is the call quality. Unlike the truly wireless earphones, the mics reside on the edges of the neckband. Hence, they are closer to your mouth and the additional neckband space allows more noise cancellation mics to improve call quality. The Zeb-Soul neckband works on the Qualcomm CSR Bluetooth SoC which features Qualcomm CVC noise cancellation. So, call quality indoors is brilliant but fades significantly outdoors. The noise cancellation does kicks in to silence car noises and other ambient sounds but I would rate it on par with the phone’s call clarity.

Additionally, you also get a vibration motor that buzzes when you receive calls. The strength of the vibration is quite strong, in fact, too strong I would say. But, considering outdoors and Indian traffic, the buzz wouldn’t let you miss any calls. Moreover, they even buzz continuously when it loses range with a connected device. This got me confused with an incoming call at times and I had to power off the neckband. 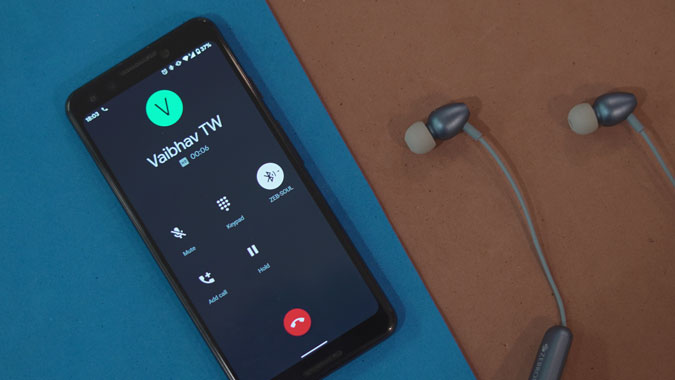 Zebronics promises 11 hours of battery life when streaming audio at 50% volume which holds true in our testing. I usually listen at 65-75% volume and the neckband’s last a healthy 8-9 hours which is sufficient to get past the day. I never had to charge them twice in a single day of usage which rates them good in my books. The neckbands run on Bluetooth 4.1 instead of Bluetooth 5.0. I haven’t experienced any connection drop but the range would have been better with Bluetooth 5.0.

However, they run on AAC codec which is slightly better than the general SBC codec. So, you would notice lesser sound latency while watching videos or playing games. 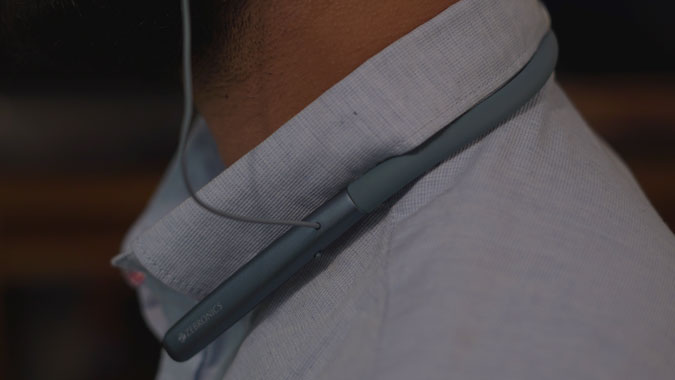 The dual pairing comes in handy in a lot of instances. For instance, I can keep them connected to my laptop and my phone at the same time. So, while I’m listening to the audio on my laptop, I can quickly take up a call on the phone. The implementation is good. It pauses the audio on the laptop when I receive a call on my phone and resumes it back when I hang up. However, I have had frequent hiccups while connecting the neckbands to both the devices. 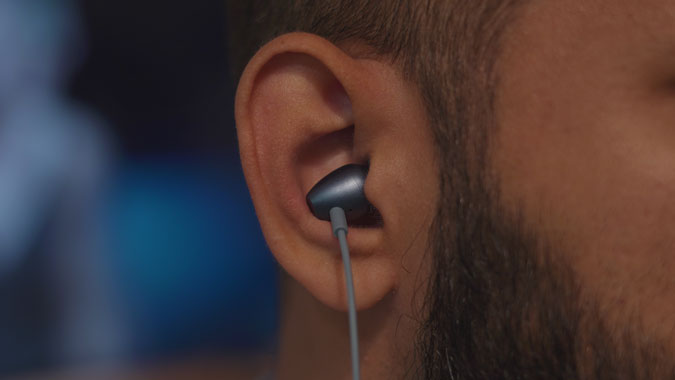 How does it fare against the competition?

There are a lot of wireless neckbands priced in this range. To begin with, I found them better than Samsung Level U and Mivi Wireless Neckband. So, if those were your choices, I would recommend getting the Zeb-Soul. It is built better, works well for calls and has a well-balanced sound output.

But, overall I would still stand by the Realme Wireless Neckbands. They are significantly lower priced than the Zebronics Zeb-Soul. You do miss out on the vibration motor but get the same audio quality and AAC codec. Moreover, the tap to disconnect feature of the Realme neckbands are just too convenient to look past.

Also Read: How to Improve Bluetooth Audio Quality on Android and Mac With aptX