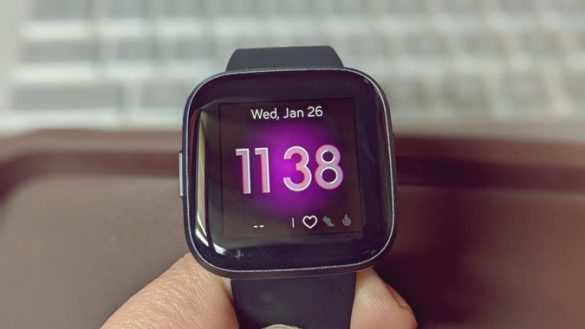 Are you unable to use your Fitbit Versa smartwatch because it won’t turn on? Well, you aren’t alone. Many Fitbit Versa users experience the same issues where Fitbit Versa watches are either stuck on a black screen, won’t start after getting wet, or won’t charge. Whatever the issue, the following solutions will help you in fixing Fitbit Versa won’t turn on issue.

How to Fix Fitbit Versa Not Working

If your Fitbit Versa watch is stuck on a black screen or not turning on, the first thing that you need to do is to restart it. Many times, this simple fix would turn on the Fitbit watch. Restarting the watch will not delete your data.

To restart your Fitbit Versa series watch, press and hold the physical button on the device for 10-20 seconds until you see the Fitbit logo on the screen. Then release the button. You might see the Alexa popup when you are holding the button. Ignore that and keep holding the button.

If the Fitbit device isn’t charging, you should try charging it using a power adapter instead of connecting it to the computer’s USB port. The computer usually provides less power as compared to power adapters so that could be the reason for Fitbit not getting charged. Once charged, press and hold the physical buttons to turn it on.

Pro Tip: If you are charging using a power adapter, try charging it using your computer. There could be an issue with the power adapter as well or the charging cable.

Often, when we are in a hurry, we place the watch incorrectly (in opposite direction) on the dock. Make sure to align the golden dots underneath the Fitbit Versa watch with the gold pins on the charging dock.

The charging pins of your watch and dock could be dirty, thus obstructing the normal charging. So clean the charging dock and the bottom area of your Fitbit Versa watch with a clean cloth. You could also use a toothpick to gently clean the area between the pins.

Many times, the power/back button on your watch is stuck and that’s why pressing it doesn’t turn on the Fitbit device. To fix it, press the button multiple times repeatedly for 10-15 seconds to release it. Then press and hold it for 10-20 seconds to turn on the watch.

Tip: Read our in-depth comparison between Apple Watch and the Samsung Galaxy Watch.

Fitbit Versa 3 comes with an automatic water lock feature, which is activated when you start swimming activity in Exercise or swimming is auto-recognized by the watch. If your watch has stopped working after getting wet, first, dry the watch for some time. Then double-press the side button quickly. If that doesn’t turn on the watch, press and hold the side button.

8. Fix Fitbit Versa Not Turning on With Wrist Movement

Your Fitbit Versa’s screen can be turned on either by tapping on the screen or by wrist movement. If the latter isn’t working, make sure Screen wake is set to auto.

To do so, open Settings on your watch and go to Screen Wake. Select Auto (Motion). Now, whenever you lift your wrist, the watch screen will turn on automatically.

Pro Tip: Tap on the watch band near the screen if the screen tap doesn’t wake up the watch.

If your Fitbit Versa is stuck on a black screen but can communicate with the Fitbit app, you should change the clock face to one of Fitbit’s native clockfaces.

2. Tap on the profile picture icon at the top-left corner. Tap on your Fitbit Versa device.

3. Tap on Gallery followed by the Clocks tab.

4. Select a clock face from the By Fitbit section and press the Install button. Grant the necessary permissions and wait for the clock face to download. Once downloaded, the watch face will apply automatically.

Hopefully, the black screen will vanish and you should be able to use the Fitbit Versa watch. If that doesn’t happen, press Sync now in the Fitbit app.

1. How to Change Screen Timeout in Fitbit Versa Watches?

If your Fitbit Versa wakes up but doesn’t stay on for a long time, you should change the screen timeout duration. To do so, open Fitbit Settings > Screen Timeout. Choose the desired time.

Open Settings on your Fitbit watch and go to About > Factory Reset.

3. How to Connect Fitbit Versa Watch to Phone After Reset?

Install the Fitbit app on your Android or iPhone. Tap on the account icon at the top and press the Set up a device button. Follow the on-screen instructions.

I hope your Fitbit Versa watch turns on and starts working properly by following the above fixes. Once that happens, learn how to get notifications on Fitbit Versa. Also, check out the best water reminder apps for smartphones and smartwatches.