8 Best IFTTT Alternatives You Need to Try in 2018

IFTTT is definitely one of the best apps when it comes to digital automation! It has a lot of advantages, like its multi-device support and an intuitive trigger-action system. That having said, they have some serious privacy issues. This is also why you need some IFTTT alternatives, at least once in a while.

Sure, IFTTT lets you connect your IoT devices and other apps. Compatibility, however, is a problem there! You can use Flows — the name for Stringify automation algorithms — to create a flow of how your devices work. You can either choose from 1000s of curated Flows or create one all by yourself. Thanks to the drag-and-drop UI, you can create any Flow in a matter of seconds.

For instance, when you enter your room, Stringify would turn on the lights, optimize room temperature and even turn on the TV.

As of now, Stringify supports more than 600 smart devices, which is just great. Another thing is that you can attach multiple actions to a single trigger.  You can connect as many devices as you like to Stringify and start creating Flows according to your needs.

The Verdict: Stringify is a wonderful choice when you want to automate your smart home devices. It offers better control and flexibility over IoT devices, with top-notch compatibility as well. That having said, it’s not a good option unless you have some Smart Home devices or wearables. What we loved about Stringify is its ability to control all the connected devices using one interface.

Consider Microsoft Flow as an enterprise version of IFTTT but as the name suggests, it mostly works with Microsoft apps and services. Like IFTTT, you’ll be able to create Flows, based on triggers and actions. The interface is very simple, and you can manage your workflows from mobile devices as well as the web interface.

For instance, you can set up Microsoft Flow to send yourself a push notification with your current address. 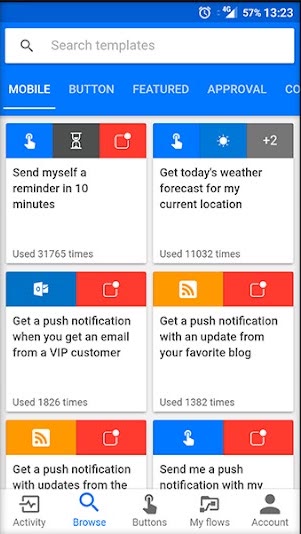 Just like the case of Stringify, Microsoft Flow also has a wonderful collection of Flows. You can either choose one or create one from blank, all according to your needs. The app offers a certain amount of flexibility in the customization department. It’s a better IFTTT alternative than Stringify, because it has a web interface where you can manage all the Flows.

Cons: Not much suitable for personal use

The Verdict: If you run a small-scale or medium-scale business, Microsoft Flow is a superb IFTTT alternative in town. You can use both the Android app and web UI to automate how your digital resources are used. The downside is the lack of compatibility with more non-Microsoft products. Nevertheless, if most of your digital products are from MS, you should choose Flow.

Tasker is an undoubted choice when you want to automate things within Android. More importantly, Tasker lets you control these things more effectively than IFTTT does. If you have a rooted Android device, Tasker can do more magic with its built-in plugins. It’s basically the king when it comes to in-device automation.

For example, you can easily set up Tasker to launch a music player when you plug in headphones. Or, you can enable Silent mode when you place the phone upside down. Tasker enables automation with the help of sensors and more.

It wouldn’t be wrong to call Tasker limitless. You can assign almost any sort of condition and set up a task to be performed. If your device is rooted, Tasker will be more powerful. You can have a look at the best Tasker profiles to have an idea.

The Verdict: Tasker is the perfect IFTTT alternative when you want to automate your Android phone. It does not support third-party services much, though. On the same note, IFTTT does not let you customize actions on your phone as Tasker does. So, if you are into setting up some cool profiles and making your Android go like clockwork, Tasker is for you. And,

Shortcuts is for iOS, what Tasker is for Android. But it goes one step ahead, i.e. in addition to the support for in-device automation on your iPhone and iPad, it also supports web-service automation.  You can even connect it to IFTTT for certain tasks like Google Docs creation.

For instance, you can use Shortcuts to show you the home ETA when you left from work, or upload the latest photos to Dropbox. Or, in another scenario, you can use Workflow to read you the important news from certain sections too. 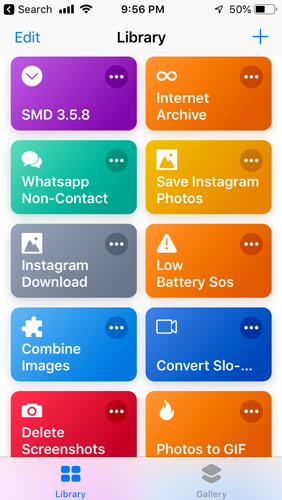 We really think that Workflow is more than a simple IFTTT alternative. It packs many features that you can’t find in the IFTTT app for iOS. It even comes with a dedicated app for Apple Watch, also letting you log data directly from the sensors. Another feature we loved in Workflow is that you can see a widget of all the flows that you have enabled for a day. Wondering why it’s so cool? Workflow is now owned by Apple.

Cons: Only available on iOS.

Shortcuts come inbuilt in iOS 12 and above, or you can install Shortcuts from the App Store.

One of the major problems with IFTTT is that it’s privately-owned. There have been issues regarding how its data collection was against privacy. This is where Huginn comes in, being an open-source tool for automating web services and more. If you want a program that automates your digital life without compromising data security, Huginn is your deal, but there is a catch.

Huginn is a bit overkill here. You can actually set up Huginn to alert you if a topic becomes viral in Twitter or even remind you to take the umbrella if it’s going to run. The best part here is that you’ve almost 100% control over what the agents do. 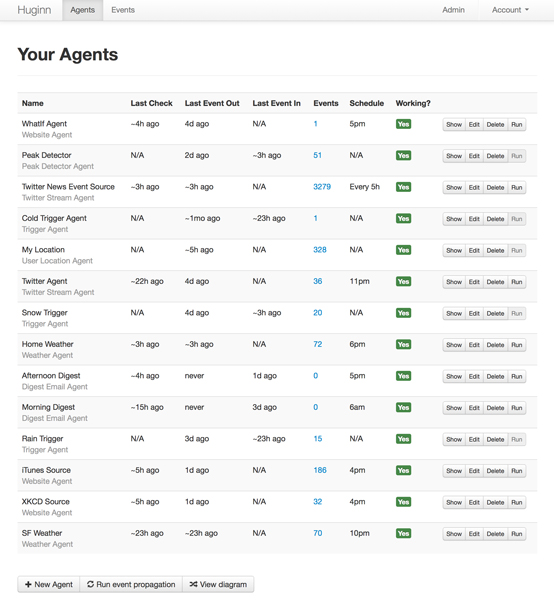 Huginn isn’t user-friendly and requires some technical expertise. If you are a beginner, you should better not try Huginn. It needs you to go deep into code and set up agents, who will be automating the actions. In case you didn’t guess that yet, you have to run Huginn on your own server. The take here is for experienced and enthusiastic programmers who need better control.

The Verdict: Huginn is the perfect choice if you are a programmer with enough knowledge and resources. In order to set up and start using Huginn, you will need your own server and a lot of time. But, if you can do it, Huginn can offer you ultimate security, privacy and more. Of course, being open source, you can make a lot of choices according to your needs.

You can use IFTTT for business purposes, but there is a limit. But, at times, you may need to automate data processes for better control. At this point, you can count on Parabola, which is a dedicated automation tool for data processes. You can connect your account with live data sources like Analytics, MySQL, MailChimp and more and gather data instantly.

For instance, you can use Parabola’s Google Geolocation Object to auto-complete addresses and ZIP data. You just have to connect your address data with the mentioned object.

Thanks to the drag-and-drop, visual-oriented User Interface, you can create algorithms in a few seconds or so. Once that’s done, you can push your data to various destinations like Dropbox, SendGrid, HubSpot etc. It all happens in a snap and you need not to be a coder for this. You can also set up schedules when a certain flow would run.

The Verdict: Out of the many in town, Parabola is the best option for automating data process. Its support for the variety of data sources and destinations make the process easier. Even if you are getting started with data analytics, Parabola would be a great option indeed. Last but not least, there are a lot of instances when Parabola can help you speed things up.

Zapier is probably the most popular and effective IFTTT alternative you can find today. The major limitation here is that it doesn’t have good smartphone apps. But, using the web app interface, you can connect, set up and automate almost every web service out there. Popular apps like Gmail, Trello, MailChimp, Twitter, FB Ads, Facebook Pages, Evernote and Google services can be easily connected.

To get an idea here, you can use Zapier to automatically post your latest WordPress posts to your Facebook Page. Or, if you are using Trello, you can create new Trello cards from some Gmail messages.

Once you select an app, Zapier will show you the suitable Zaps, the unique name for workflows. Of course, if you need, you can set up your own Zap too. You may not need that since Zapier has one of the biggest and better collections of automation templates we have seen. Unlike IFTTT, Zapier offers support for teams as well.

The Verdict: It does not matter if you need a simple web service automation or something business-oriented, Zapier is the best choice. It combines some of the best apps, integrations, and algorithms with the simple-to-use UI. Altogether, you would not need another alternative than Zapier. This is also the reason Zapier is often considered the IFTTT-like IFTTT alternative.

Yonami is a new home automation app. Yet, it supports more than 100 different IoT devices and adding more every day.

Unlike IFTTT, you can add multiple when conditions (IFTTT only allows only one) in your routines. This feature alone makes it superior to IFTTT plus you can add an IF statement as well. The whole routine looks like this. When > event occurs, Run > actions, but only if > statement.

You can create scenes and custom routines across multiple platforms with Yonami routines. You just have to connect all the services with your Yonami account and create routines. Every routine executes instantly giving you more control over the results of the IoT devices and protocols. You can create routines based on time of day, GPS location, and actions of other smart devices.

Cons: You have limited service support as compared with IFTTT.

The Verdict: The Yonomi app is completely free and you can use it with your existing IoT devices to create complex and intuitive routines. Although the app works great, it still has a few shortcomings like there are still fewer services available on Yonomi as compared with IFTTT. Yonomi focuses more on routines and scenes which gives you the ability to connect your multiple devices seamlessly in one routine. If you want a dedicated home automation service, use Yonomi.

Now that you have seen the best IFTTT alternative in different categories, it’s your choice. If you need quite something like IFTTT, you can go for Zapier or even Workflow. On the other hand, Tasker is the go-to choice if you need better control over Android device. On the other hand, for business needs and advanced options, we’d recommend Microsoft Flow and Parabola. Last but not least, don’t remember Huginn, especially if you have the technical knowledge to set up this open-source, privacy-friendly automation platform.