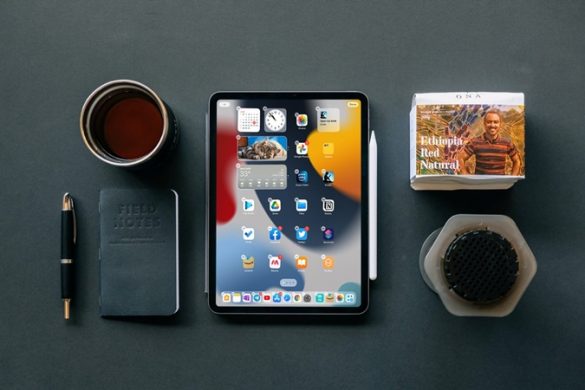 Tips to Set up and Customize Home Screen on iPad

One of the major features that was introduced in iPadOS 15 is the ability to add widgets to iPad’s home screen. Long press anywhere on the iPad’s home screen to enter the editing mode. When the icons start to shake, tap on the add (+) icon at the top. You will be taken to the widget gallery. Find that widget that you want to add. Tap on the Add widget button to add it to home screen. Alternatively, drag the widget to the home screen.

On the home screen, you can reposition the widget and create widget stacks. We have covered widgets separately in another post. Check out how to use widgets on iPadOS 15.

Another feature that made to iPadOS 15 is App Library. If you are an iPhone user, you must have seen it on phones running iOS 14+. The App Library houses all the installed apps on your iPad. It’s like the App Drawer of Android. The apps are automatically grouped in various folders depending on their type. Some folders present in App Library are Social, Creativity, Entertainment, Productivity, and more. Unfortunately, at the time of writing, you cannot customize App Library as per your preference.

The App Library can be accessed in two ways on iPad. The first method is similar to what is present on iPhone. That is, go to iPad’s last home screen page and swipe left on it to open App Library.

Alternatively, you can access App Library on iPad from Dock too. Tap on the first icon from the right side to go to App Library.

3. Turn off App Library in Dock

In case you aren’t in favor of the App Library icon taking up space in the Dock, you can remove it from there. For that, go to Settings > Home Screen. Turn off the toggle next to the Show app library in Dock.

Each folder in App Library shows four icons. Three most-used apps from that folder appear first followed by a mini folder (looks like four app icons) that is home to other apps in that folder. Tap on the four-app icon to reveal other apps.

In addition to automatically generated folders, you’ll find Suggestions and Recently Added folders in App Library. The Suggestions folder will show different apps at different time based on your usage habits. As the name suggests, the Recently added folder holds newly installed apps on iPad.

There’s another way to add apps to Home screen from App Library. For that, hold the app icon in App Library and drag it upwards. When the home screen opens, lift your finger up to put the icon on home screen. Using second method, you can add multiple icons of the same app on your home screen.

Tip: You will also be able to share apps with others by using the Share app option.

Are you wondering how to remove already installed apps from home screen and keep them in App Library alone? For that, long press the app icon on home screen until a menu appears. Tap on Remove app followed by Remove from home screen.

Alternatively, touch and hold anywhere on home screen until icons start to shake. Then tap on the (-) icon on the app icon. Choose Remove from home screen.

Instead of removing the apps individually to delete a page, you can hide the entire home screen page on your iPad. This is a great feature to customize the iPadOS 15 home screen.

For that, long press anywhere on the Home screen. When the icons start to jiggle, tap on pages icon at the bottom. You will see all the available home screen pages on your iPad. Uncheck the box available under a page to hide it from your iPad’s home screen. Tap on Done at the top to save changes. Similarly, you can unhide pages anytime by checking the box under them.

To uninstall an app from your iPad, long press the app’s icon on home screen. Select Remove app followed by Delete app.

If the app isn’t available on home screen, you can delete it from App Library as well. Long press the app’s icon in App Library. Select Delete app from the menu.

The app icons in App Library will have an X icon on them. Tap on the X icon one by one to uninstall apps from your iPad. This method will save time as compared to the previous one.

How Did You Customized iPadOS 15 Home Screen

Those were several ways to set up and customize the home screen on your iPadOS 15. At any point, if you want to reset your home screen to place stock app icons back to their position, go to Settings > General > Reset > Reset home screen layout. Currently, you cannot hide or move apps between folders in App Library. We hope Apple adds the ability to customize App Library in future builds of iPadOS. Meanwhile, check out how to use Quick Notes on iPadOS 15.