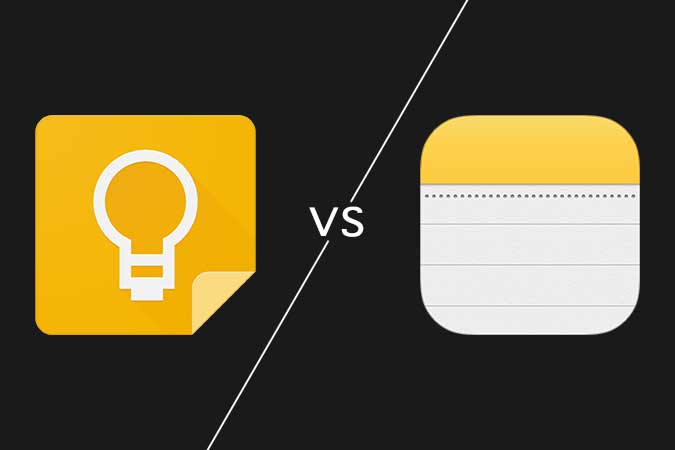 The ability to take notes is an integral part of using an iPhone as it allows me to jot down trivia, add recipes, and scribble down unfiltered thoughts. I use both Google Keep and Apple Notes on different devices and choosing one can be confusing for most users. That’s why I’d be attempting to breakdown the two apps and where each shines. Let’s compare Google Keep and Apple Notes.

I am going to compare the two note-taking apps on features that a consumer would want. To keep things simple, I’d award a point to each app at every comparison and then tally at the end.

Google Keep is the default choice for Android smartphones but it reaches far beyond that. You can use it on Chromebooks, and even on the desktop without losing any features.

Apple Notes is exclusive to the Apple ecosystem and it comes preinstalled with every Apple device you purchase such as iPhone, iPad, and Mac. Every note you create on any device would be instantly synced with iCloud. That being said, you can use Notes on a Windows PC by simply logging into your iCloud account. However, there are some limitations. You can’t use formatting natively on the web, and the session expires after a while.

Google Keep is clearly at an advantage with native apps for both Android and iOS but you can still use Apple Notes on those devices using a browser which doesn’t offer the same experience though.

If you frequently take notes then you’d understand the importance of organizing them. Google Keep uses labels to help you organize your notes. You can label each note and find all of them under that label. You can also color-code your notes. It’s fine on its own but I’d wish Google Keep brings actual folders sometime in the future.

Apple Notes have a wins here as iOS 14 added folder support to the Notes app. You can either keep all the notes in one place or separate them into folders. Apple Notes win this round because of how well they’ve implemented the folders across the ecosystem.

Google Keep does not have an option to format your texts and you can only jot down words normally. The reasoning behind that is that Keep is intended for on-the-go note-takers and if they wish to format their texts, they can simply use Google Docs.

Apple Notes does, in fact, supports text formatting options such as bold, italic, underline, and strikethrough. It also has native support for indentation and text replacement. You can simply select a piece of text and format. One thing to add, the formatting doesn’t work in Notes when using a desktop browser. You can easily just copy formatted text and paste it to your Notes and it would still work. This works on Keep too.

The notes don’t just mean scribbled text anymore, Google Keep also lets you add links, photos, checkboxes, scribblings, drawing, and even audio in the app. The scribble notes are saved as a separate note and you can write texts using your keyboard. Google will automatically transcribe audio notes so you have both audio and text versions handy. It is surprisingly accurate. Note that you can either add regular text or create a to-do list using check boxes but not both in the same note.

Apple Notes also supports checklists, tables, links, images, and scribblings. Even though Apple Notes doesn’t have an audio attachment, it implements the existing features extremely well. For example, you can have scribbled notes and written text in a single note that is just amazing for iPad Notetakers. You can even draw shapes and the notes would recognize and clean up the edges.

Not only you can add images to a note, but you can also scan documents and add those as attachments. Google Keep and Apple Notes both have some exclusive features that grant an advantage over each other and both deserve a point on this one.

Google Keep has no option to lock or protect notes within the app. You can’t even lock the app itself with any biometric security or password. Apple Notes on the other hand has always had this functionality that allows you to lock notes that comes in handy when you don’t want people to have access without a password. Apple Notes easily gets this one.

Google Keep has sharing options built-in the note-taking app, but it’s elementary. You share the note with someone and they get access to it. After that, they can start editing your notes, but there’s no way to limit the access to ‘View Only’.

Apple Notes has a clear advantage when it comes to collaboration. You can share a note with anyone with an Apple ID and they can start editing it on their Notes app. You can limit the access to ‘View only’ so they would just be able to see the changes and not make them. Unlike Google Keep, Apple Notes has a clear distinction when a particular user makes a change and is highlighted with a color assigned to the user.

Apple Notes has a clear advantage but Keep deserves a point as well because of how seamless their sharing process is.

For once, Google Keep and Apple Notes implement a feature equally well. The search functionality is similar on both the apps and you can search for terms inside the notes. The app also recommends suggestions based on attachments, lists, labels, recordings, locked notes, notes with drawings, etc.

Google Keep vs Apple Notes: Which Notes App Should You Choose

Google Keep and Apple Notes are two thoughtfully designed apps that let you take notes on a variety of devices. They offer seamless integration with other devices and you can drop anything in your note from links to images. However, when you pit one against the other, there is a clear winner based on the score alone – Apple Notes. Google Keep still takes the cake when you add any non-Apple device to the mix. Yes, even though you can edit notes on the web with Apple Notes, it’s not as convenient as having a dedicated app.

To sum it up, if you primarily take notes on iPhone, then Apple Notes is a clear winner. Keep Google for everything else. What do you think? Let me know on Twitter.