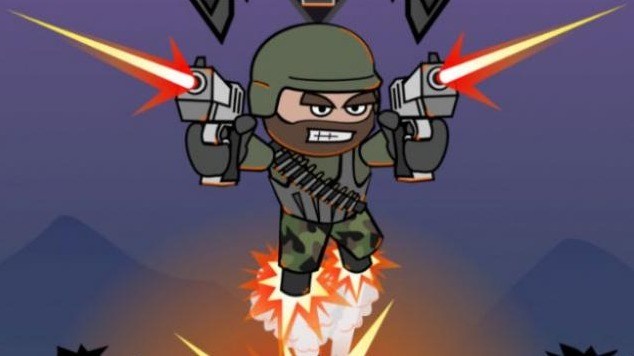 Multiplayer shooting games for Android are cool. You can sit on your couch and engage in global gameplay. But, do you know what’s cooler? Offline multiplayer shooting games. These games let you play engage in action with your real friends. I mean, you can sit in your room, connect to a Wi-Fi Hotspot and start playing, right? If you like that kind of fun, keep reading.

Offline multiplayer games can be played between multiple devices. You have to connect all the devices to a single Wi-Fi connection or a Mobile Hotspot. In this article, however, we have listed some of the best offline multiplayer shooting games for Android. Even if you have two or three friends with you, these shooter games will be fun.

We have tried to include diverse kinds of shooter games for Android. You will find First-Person Shooters and pixel-graphics titles inside. Shall we begin?

Read: 16 Multiplayer Android Games You Can Play on Same Device

Shades – Combat Militia is one of the best multiplayer shooter game that you can play via LAN. It is not FPS, but the graphics quality is awesome indeed. The game is still in the Beta stage, but it’s awesome. You can explore up to six maps, choose between 20 weapons and pick the right mode. Apart from Wi-Fi Multiplayer, Shades – Combat Militia also lets you play against online players and bots. In all cases, you can choose various modes like Deathmatch, Team-Deathmatch, etc. 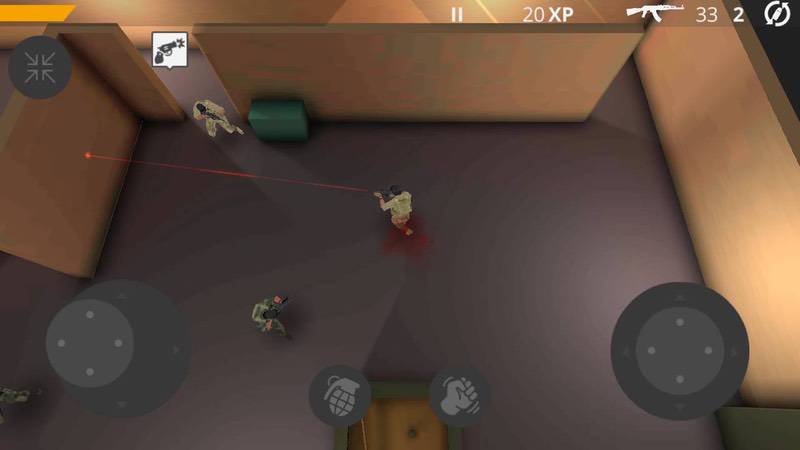 We cannot create a list of offline multiplayer shooting games without including Doodle Army 2: Mini Militia. It was a trendsetter. The game isn’t about graphics intensity or anything. On the other hand, it is set inside a superb world where you have a pixel-like battle. There are different modes like Survival and Co-Op. The best part is that you can play with up to 12 players in the WLAN mode. Despite the minimal setup, Doodle Army 2: Mini Militia offers multiple weapons and customization. 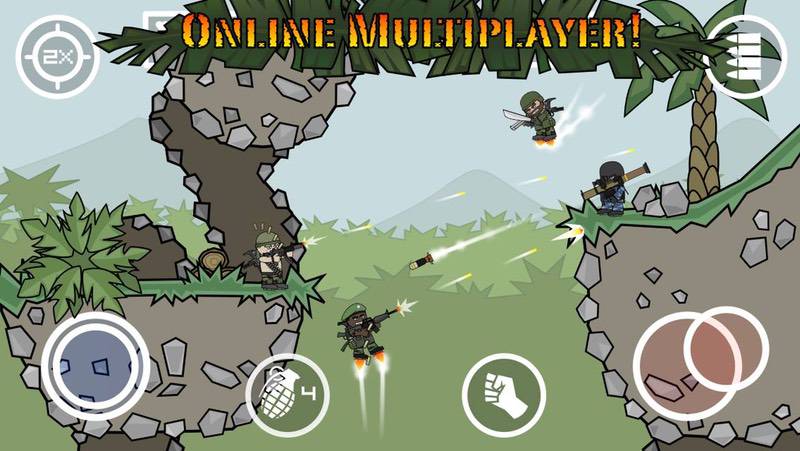 Price: Doodle Army 2: Mini Militia is free to play, with some in-app purchases

2D Strike offers exactly what you guessed from the name it’d offer. It’s a completely 2D offline multiplayer shooter game for Android. However, as players, you can choose between 15 weapons, including guns as well as flamethrowers. As the gameplay progresses, you have to strengthen your base and fight enemies. It has free-for-all, capture the flag, and base defense playing modes in 2D Strike. You can create a team-play of 20 people in a single map. 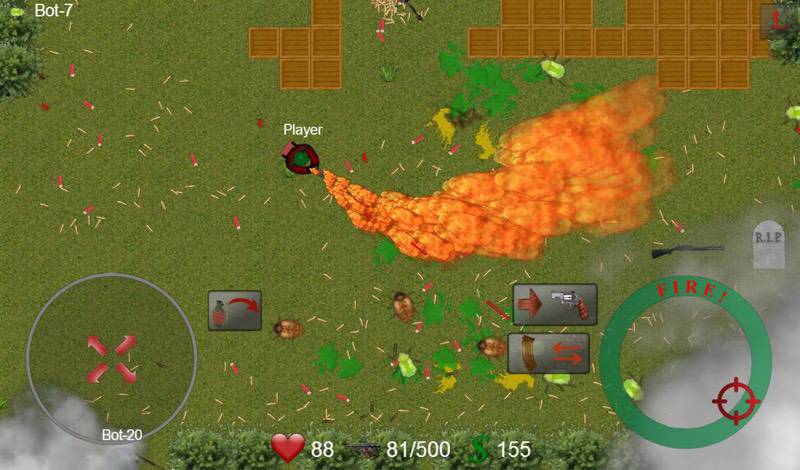 If you are looking for an action-packed offline multiplayer shooter, Special Forces Group 2 is the best choice. This FPS game offers a wide variety of gaming modes such as Resurrection, Zombie Mode, Bomb Mode, and Deathmatch, etc. You can also choose from 30 maps and 45+ weapons across the game. When it comes to multiplayer gaming, you can either stay offline or go online. Even if you don’t have an internet connection, Special Forces Group 2 lets you play against bots. 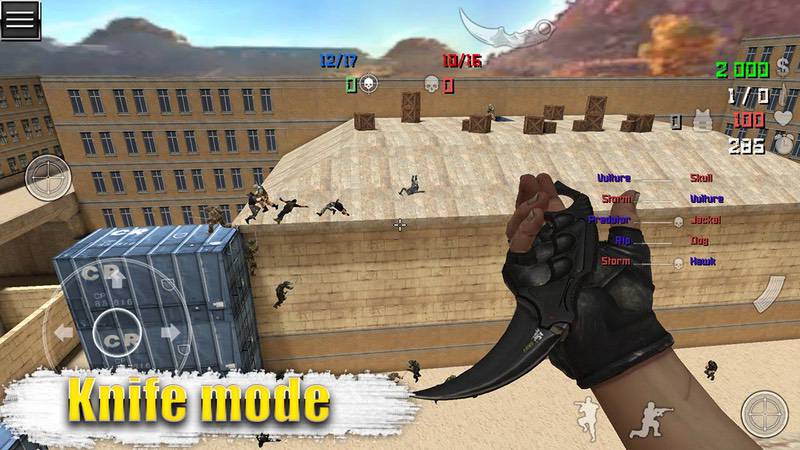 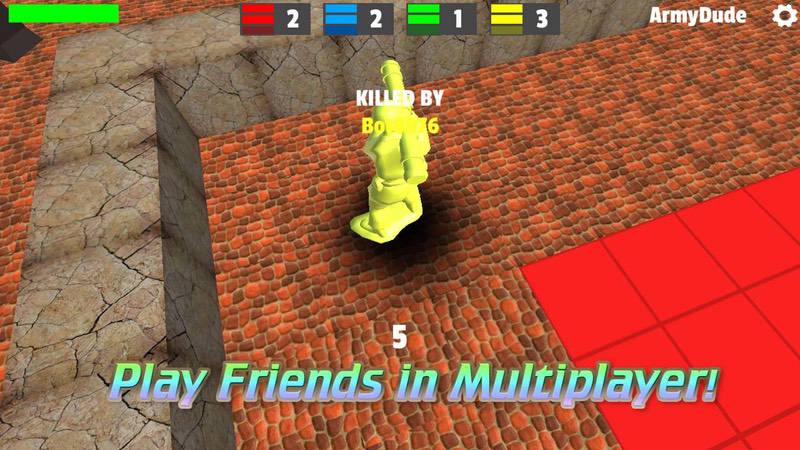 LWP – LAN Multiplayer FPS is another great First Person Shooter you can play with friends. Compared to the many titles above, this game is light and usage-friendly. You can keep playing the title even without a flagship device. It comes with a variety of modes, Zombie Survival being one of the best. As far as multiplayer gaming goes, you can create a team-play of 10 individuals. Like the normal FPS games, LWP – LAN Multiplayer FPS is offering options for customization as well. 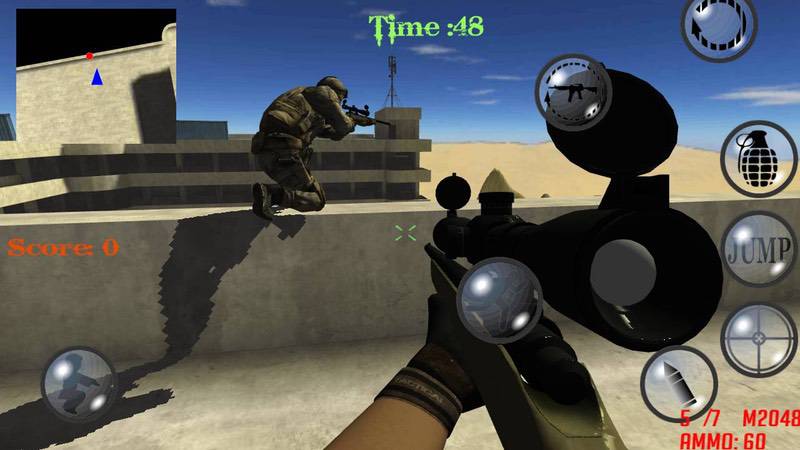 While it’s not a graphics-intensive FPS or anything, ZMS Pocket Fight is one of the superb offline multiplayer action game for Android. In the gameplay, you have to keep moving and attacking others. Along with the act of shooting, you have to chase your enemies and hunt things down. It has a maximum support of 6 devices, which seems okay. Just so you know, ZMS Pocket Fight is a single-touch game. You can control your players in simple gestures and touches. 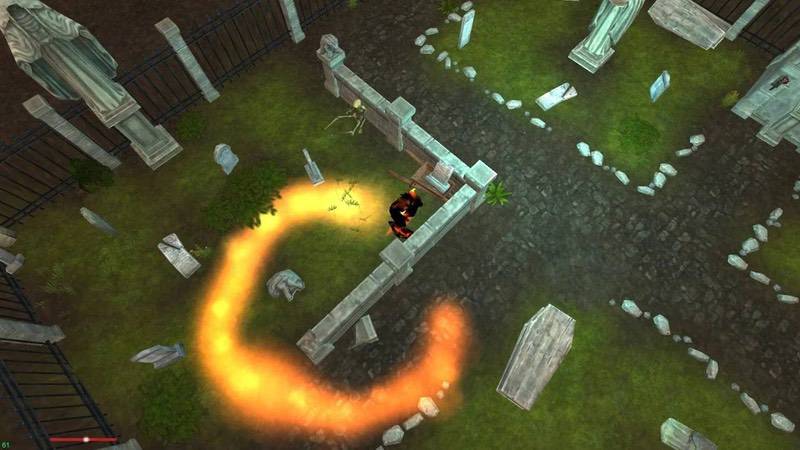 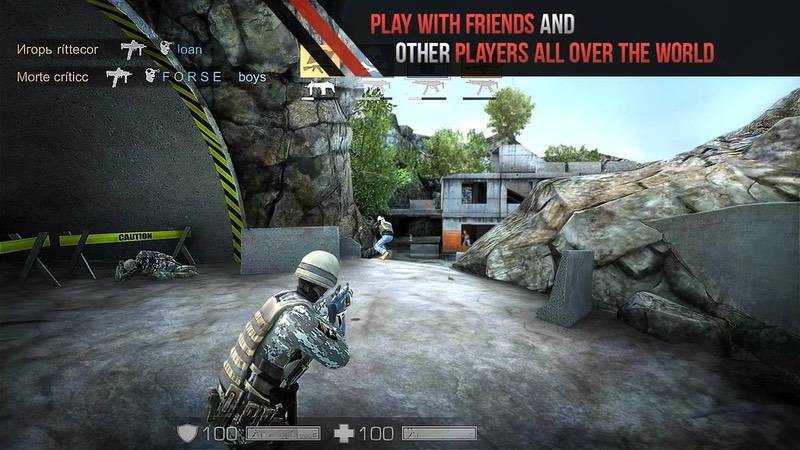 In case you didn’t guess that yet, Zombie Scrapper is about fighting all the zombies on your way. But, in this 2D game, you will come across a variety of zombies, including the excluding ones. You have to survive them individually or with the help of friends. The game offers different Zombie Scrapper levels and achievements. Altogether, the gameplay is impressive. You can team up with your friends to survive the battle together. It is not the typical shooter, but it’s great to play. 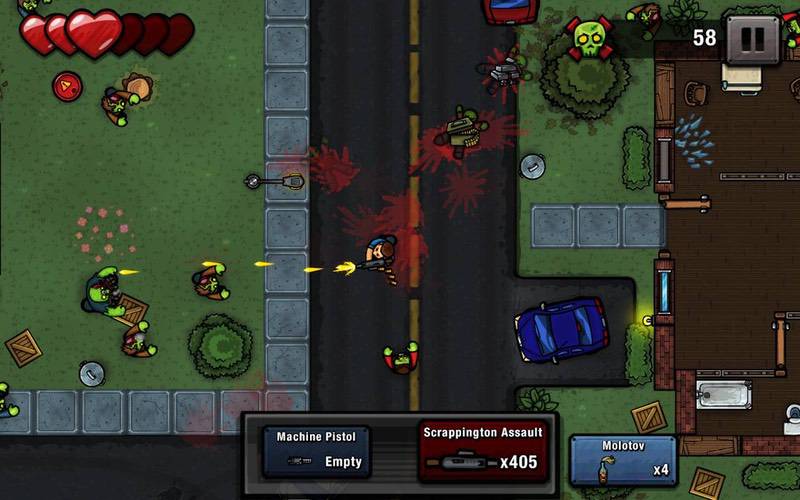 CyberSphere: SciFi Shooter is the best a futuristic shooter game can get. However, the unique feature is here that you can play local multiplayer matches between Android and iOS devices. All you need is a simple Wi-Fi connection. Apart from weapons and other support equipment, CyberSphere: SciFi Shooter offers a wider collection of playing modes. You can get into Deathmatch, PVE, etc. Despite the wonderful action, the game takes up a small amount of space only. 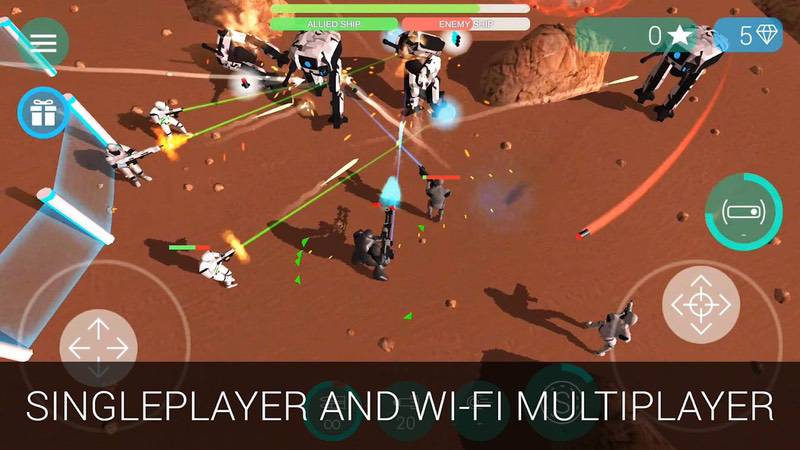 An immensely popular action game, Pixel Gun 3D (Pocket Edition) offers a wide variety of multiplayer gaming options. You can engage in local multiplayer as well as online ones. In both cases, you can unlock weapons, customize your characters, and better the battle. Pixel Gun 3D (Pocket Edition) allows a maximum of 8 users to take part in a match. There are also Battle Royale mode and a Cooperate mode if you are interested. As you can see, it’s the popular pixel graphics shooter. 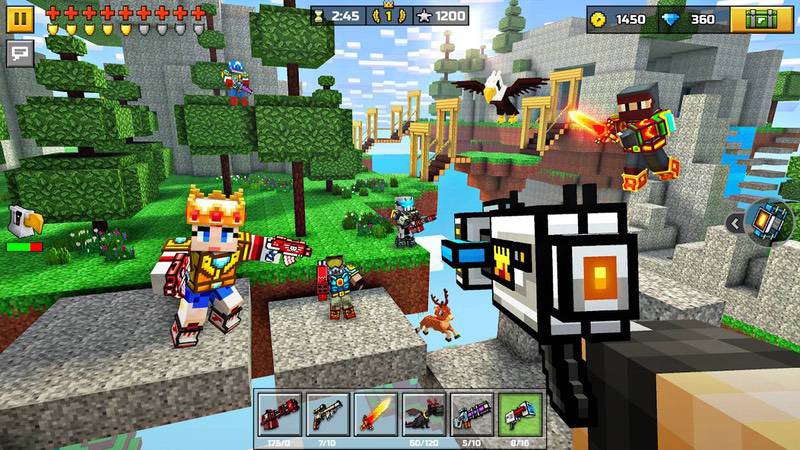 Local Warfare: LAN/Online FPS is a widely popular offline multiplayer FPS for Android. Apart from the fast-paced gameplay and realistic graphics, the game offers a wonderful experience. You can either create a LAN or go online to engage in the multiplayer battle. We would not say that the game offers the best graphics, but they are quite satisfactory. You also get options like weapon customization and gameplay customization. Altogether, if you are looking for a quick FPS for Android, you should get this one. 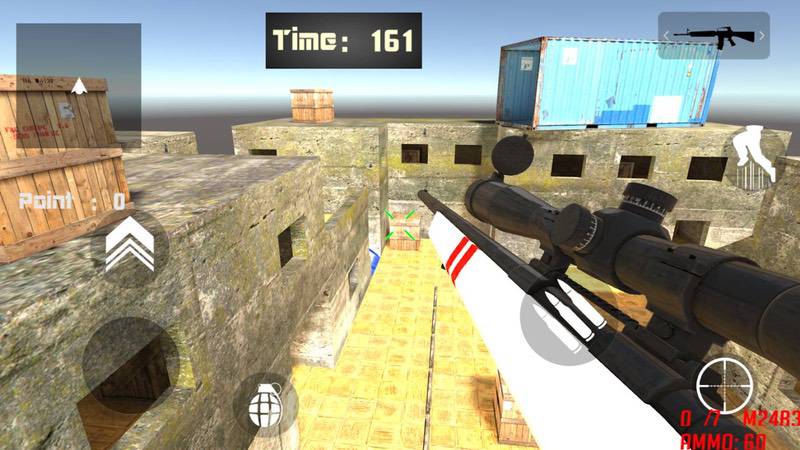 BBGame LAN Multiplayer is a simple game when compared to others. However, when you want to kill your time with your friends, this is a great relief. Once you have set up the network, you can see the character and the map. As you move along, there are actions like jumping, weapon firing, and all. It needs to be noted that BBGame LAN Multiplayer comes with a really old set of graphics and it may remind you of Mini Militia. As we said, this isn’t for hardcore gamers out there. On the other hand, if you find it funny playing silly shooters, go for BBGame LAN Multiplayer. 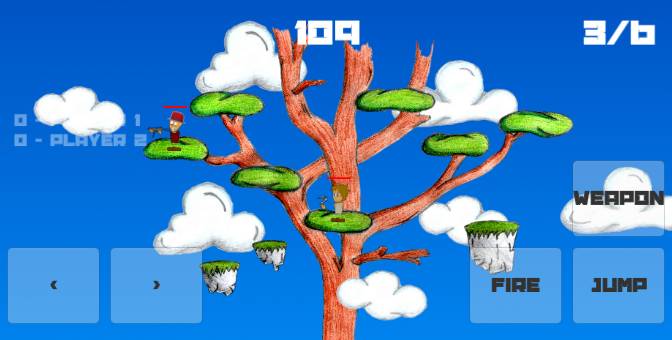 We wanted to include this funny Android game on this list, which is also great to play. Yet another silly gaming title, Tanks Battle wants you to shoot down the friend’s tank. The animations aren’t that professional or realistic, but rather cute. You would love this title if you want to simply spend time gaming. You can move your tank across the map and keep attacking the opponent. The tank to score 3 rounds in a row will win the game. There isn’t a storyline or context, but Tanks Battle is all fun. 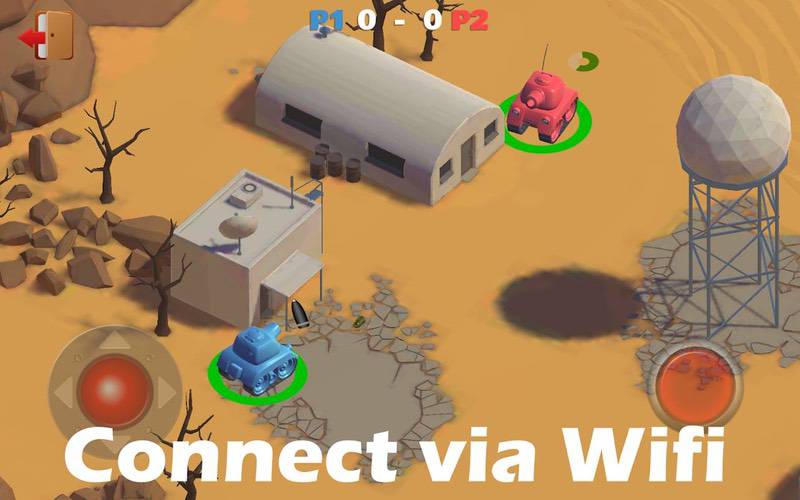 Last in the list but probably the best, MazeMilitia is the complete destination for multiplayer gaming. It lets you take part in both LAN and online multiplayer. This FPS game comes with a lot of options for customizing your character and the gameplay itself. It’s quite deep since you can unlock more weapons and features as you move along. Adding more spirit to the gameplay, it’s completely set in warfare. Every move you make matters in the long run. 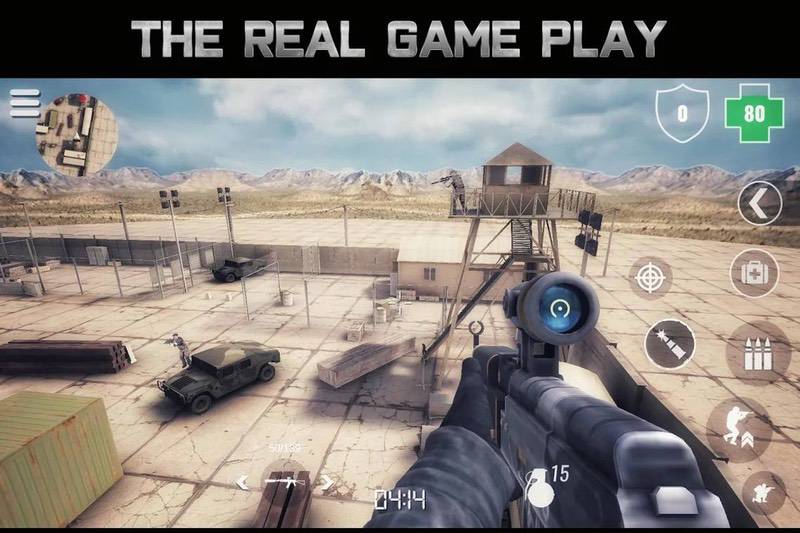 Battle of Agents gives you a feeling of Counter-Strike GO and is optimized to run on older Android phones as well. So, if someone in the group has an old Android phone, he won’t feel left out. The game has several modes including a practice mode, which comes in handy to get you familiar with the game controls. If you want to add more spice, you can also try playing the Zombie Co-op mode, where your team takes up a fight against zombies.

Similar to other apps, all you have to do is get all devices under the same network and create a hotspot so others could connect. Then simply choose the map you want to play in, i.e, city, fall town, and village.  If you want to add some of your friends to the same team, host from one device and search the host game from the other one. Connecting players is by far the simplest of all. So gather your friends and get going.

Check out Battle of Agents

It doesn’t matter whether you are looking for intensive gaming or casual takes — you have the best options here. Our personal favorites would be Standoff and MazeMilitia, with Mini Militia on the top list. Most of these games work fine on mid-range Android devices, which is a great perk believe. So, the next time you have got a boring lecture in class, play some of these.