Budget gaming laptop segments have plenty of contenders and one of those is an Amazon bestseller, Asus TUF Gaming Laptop FX505DY. Instead of luring you with a combination of an Intel processor and an NVIDIA GPU, this laptop comes with an AMD CPU and GPU. I bought it last week and have been testing it extensively. In this article, we’ll discuss if this budget gaming laptop is worthy of your wallet. Let’s begin.

Asus keeps things minimal with this one; you just get the laptop, a Charging brick, and a few pages of manuals. Considering all the exciting things are inside the laptop, it makes sense that the box complements the machine itself. The brick is unapologetically huge and has a power output that is a 120W to support the machine while performing at full capacity. 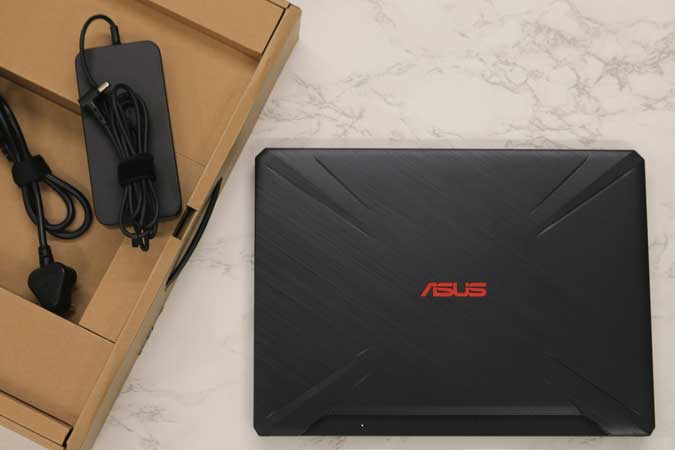 At first glance, the gaming laptop looks premium with a brushed metallic finish and machined ridges but loses it’s illusion as soon as you touch and feel the surface. The entire body is made of plastic which may be a dealbreaker for some. However, I like the fact that it actually makes the laptop a little light making it easier to carry around. Plus the display bezels are really slim giving it a modern look.

Even though I like the design choice for the body, the body near the keyboard feels a little cheap as you can see it flex when you type on the laptop. Take a look at the GIF below for reference.

For the price bracket that it competes for, FX505DY offers decent build quality and I don’t mind the plastic choice for the body.

Asus offers you a chicklet style keyboard that lights red with three different intensities and you can even turn the backlight off. The keyboard has a decent Key-travel which gives you pretty good feedback while typing or gaming. I wrote this entire article using the laptop’s keyboard and I find it perfectly adequate for both gaming and casual typing. 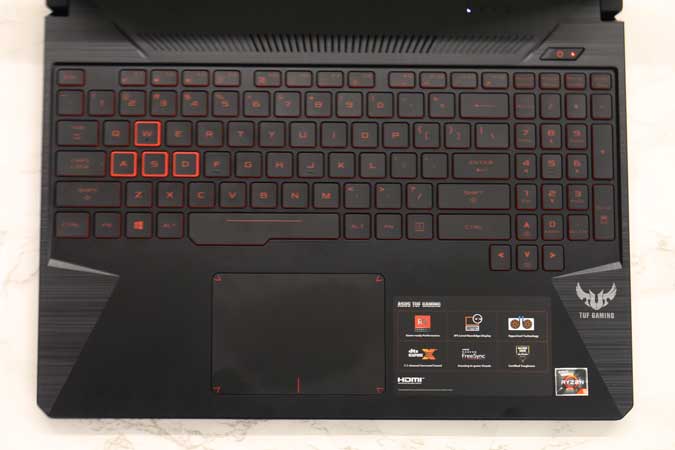 The key placement is distinctive as you get a full-size arrow key set that makes navigation much more natural and doesn’t eat into the space of right Shift and right Ctrl keys. Also, you get a Numpad.

The touchpad on this machine is average at best. I mean it works fine and supports all the Windows gestures but it has all the problems of an average touchpad. For example, the tactile feedback is not impressive at all, and it is prone to accidental touches. Eventually, you do get accustomed to the touchpad and it becomes less of a hassle with time. However, if you’re going to game on this laptop, use an external mouse and disable the touchpad altogether.

The display on Asus FX505DY is a 1080p IPS panel with a 60Hz refresh rate. The refresh is standard for a budget gaming laptop but the IPS panel makes the budget laptop shine. The viewing angles are great and it has a higher contrast ratio when compared to an ordinary LCD panel. My favorite thing about the display is the anti-glare film that minimizes the reflections, I can not stress enough why every display should come with this option.

The ports on this laptop are only on the left side with nothing on the front and the right side. The back has two cooling vents for the CPU and GPU fans. You get a power port, a single USB 2.0 port, two USB 3.0 ports, one HDMI port, one LAN port, and one 3.5mm headphone jack. 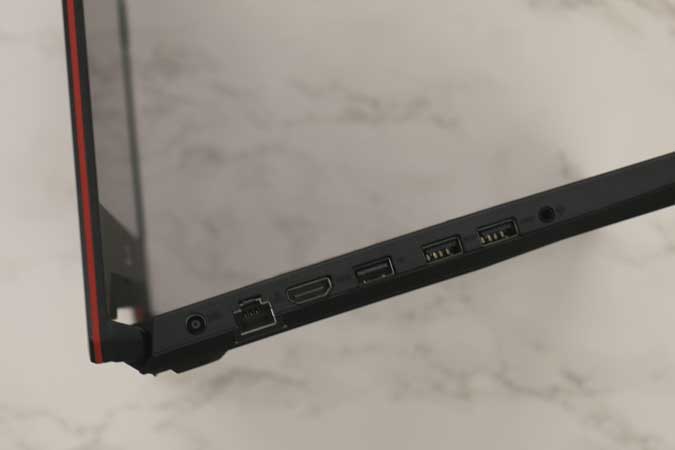 I was surprised to find out that this laptop doesn’t have a card reader which may have been a poor decision on their part as most gaming laptops are also used as video editing rigs. I guess the future is a dongle.

When you use the laptop for casual browsing and light programs, you won’t ever feel any lag. However, if you get the HDD model, loading and startup times would be a little longer than the SSD. We’ll discuss it in a bit.

You get a Radeon Rx560x GPU with 4GB of VRAM that is paired with a Ryzen 5 3550H CPU and 8GB of RAM. While the processor is an early 2019 version and the GPU is a generation older, it still manages to run the games without any frame drops. I played Half-Life 2 at maximum settings and still got a steady 60FPS. However, if you play more resource-intensive games like Fortnite and PUBG at max settings, you will experience a reduced frame rate of around 30-40 FPS.

Another reason for checking out a budget gaming laptop was to test its video editing abilities as programs like Premiere Pro and DaVinci Resolve require a powerful CPU and GPU combo. During my testing, I could easily export the projects on DaVinci Resolve but the interface was buggy and unresponsive. However, Premiere Pro ran like a champ and offered a smooth interface and fast render timings. If you’re looking for a budget machine to start editing videos on Premiere Pro then you can look into this budget gaming laptop.

Another use for this gaming laptop can be coding and software development. As I mentioned earlier, it efficiently runs power-hungry programs and you can easily use it to code and develop software by using different IDEs. I installed and used Android Studio to create a small test app and the laptop handles it really well.

Asus claims an average battery life of four hours on this laptop and it holds up when you use it to casually browse. I used it on battery and got a battery backup of around 3 to 3.5 hours. However, If you switch to gaming and run the laptop at its maximum potential then the battery life reduces considerably and can run out in 1.5 to 2 hours.

Laptops are not really upgradable, except for two things; storage and RAM. Fortunately, the machine has two RAM slots and it comes with a single 8GB RAM stick and you easily add another to double the memory capacity. The laptop supports up to 32GB of RAM. 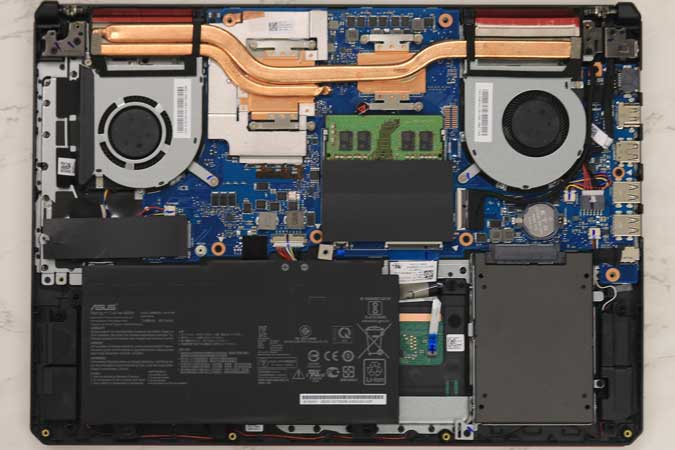 You get a SATA port and an M.2 port for your storage drives. As the laptop comes with a1TB HDDD, you can add an M.2 drive for extra storage or install SSDs for faster boot times. The only limitation of the M.2 port is that it is still a SATA port and not an NVMe, therefore you won’t get higher speeds than 6Gb/s.

I wanted to test the performance of the laptop using an SSD drive so I installed Windows 10 on a 120GB SSD and replaced the existing HDD with it. During my brief testing time, SSD resulted in faster boot and quicker app launches. I would suggest getting an SSD if you choose this machine.

Another thing I noticed while testing the laptop was that it gets really loud even at a moderate load on the system. The two fans are loud enough to bleed through the earphones and can get annoying while gaming. I would suggest getting a good pair of headphones if you want better soundproofing.

Should you buy it?

Selling at the price of $649 or Rs 52,990, Asus TUF FX505DY makes sense if you want a machine that is both powerful and lightweight.  You get an above-average screen, backlit keyboard, a powerful CPU and  GPU combo, and decent battery life. However, I don’t like the fact that it uses a very mediocre trackpad and the body flexes a lot while typing which may be subjective but it is still annoying. Also, the dual cooling fans make a lot of noise and kick in even at the slightest load.

If you can ignore these nitpicks then Asus TUF FX505DY is a decent gaming laptop and would serve you well during gaming sessions or if you decide to use it as a video editing machine. What do you think? Would you buy this laptop? Did I miss anything? Let me know in the comments below.

A sub $700 gaming laptop that runs on an all AMD processor and GPU. It makes a strong argument with its hardware configuration but loses on a few minor things.