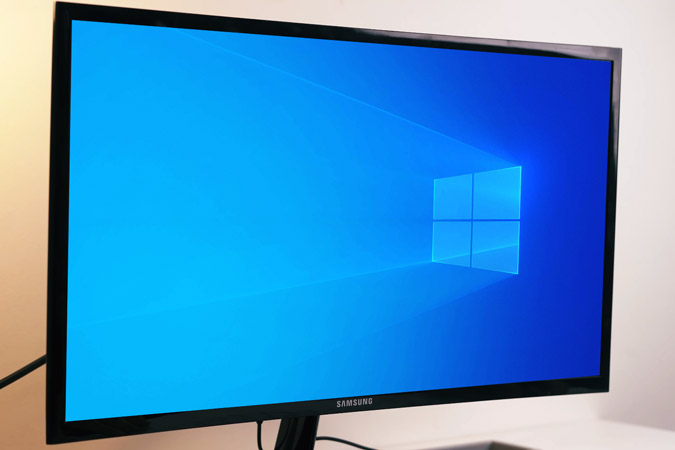 Although Windows 10 comes built-in with a Night Mode and quick brightness slider, it doesn’t work on extended displays or desktops. If you use a multi-monitor setup, you have to manually adjust the brightness levels on every monitor. Having said that, you can get past this by simply using screen dimmer apps for Windows 10.

Dimmer, as the name suggests, is a basic Windows screen dimming app that supports multiple displays. The app casts a grey overlay on all the displays and you can just move the slider to dim the screens. I tried it on 3 monitor setup and it worked flawlessly. Dimmer is a portable program. So, you just have to extract the zip folder and double-click to use Dimmer.

The only downside is a lack of controls within the app. It doesn’t support keyboard shortcuts or user-defined presets. Having said that, if you need a basic app, it works flawlessly.

Similar to Dimmer, PangoBright is another screen dimmer app for Windows 10. It stays in the system tray and instead of a slider, you get percentages. On top of usual features in Dimmer, PangoBright also provides you an option to change the tint color of the screen.

CareUEyes builds a bit on the above-mentioned apps. It provides manual toggles for screen white balance, brightness, etc. Also, if you find all of these options confusing, there are built-in presets like Office, Editing, Gaming, Reading, etc. for different scenarios. On top of it, you can also create your own presets.

My favorite feature of CareUEyes is that you have the option to set up hotkeys to increase or decrease the brightness. So, instead of opening the app every time, I can control the brightness of all my monitors with keyboard shortcuts. The only caveat with the app is that it doesn’t provide separate controls for individual monitors. The settings apply to every monitor connected.

When you open f.lux for the first time, it asks you to enter your location and adjust brightness as per the time of day. For instance, it provides 3 different white balance tones for sunrise, sunset, and bedtime. You can customize these options and have even more white balance timers.

Moreover, if you have a smart light like Philips Hue or Yeelight, you can sync them with f.lux. It’ll customize the white balance of your screen along with the light in your house.

The only caveat with Iris Screen Dimmer is that it’s a paid app. You get a 7-day free trial and post that, you have to shell out $1.99/month.

The only caveat with DisplayTuner is that it doesn’t work on laptop screens. For instance, if you have a laptop extending to a monitor, it works only on the monitor but not on the laptop.

Click Monitor CDC is similar to DisplayTuner but with a lot more customizations and hotkeys. Apart from the usual brightness and sound levels, it also lets you set up brightness and audio levels for different times of the day. You have to manually set it up within the app first.

How Do You Dim Screen or Manager Brightness

For a minimal use case, Dimmer is a portable app that lets you control monitors individually. I use f.lux as it requires minimal manual setup and works flawlessly. If you are a power user, you should try a brightness control app like ClickMonitorDDC.

How to Open MSG Files With/Without Outlook on...

How to Unlock and Toggle Microsoft Defender Settings...

How to Enable and Add Stickers on Windows...

How to Get Full Control of Samsung Galaxy...

How to Use Terminal on Windows 11