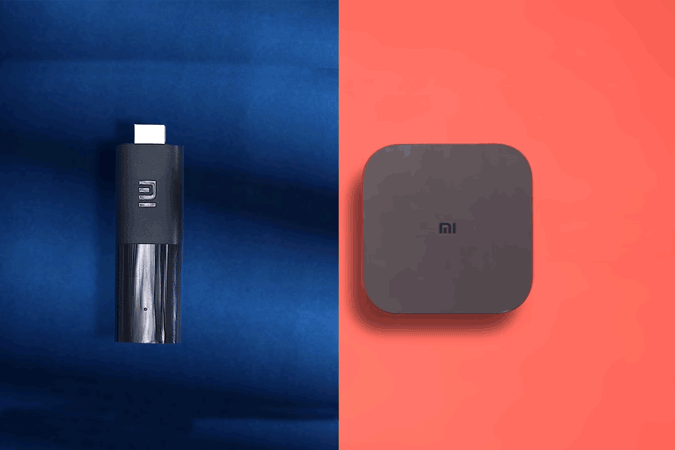 Xiaomi recently launched the Mi TV Stick at $49 global and 2,799 INR in India. It’s $30 cheaper than it’s all-time offering Mi Box S. So, the obvious question is – “How is Mi Tv Stick different from Mi Box S”. And more importantly which one should you buy? Well, here’s a rundown of what’s different between the Mi TV Stick and Mi Box S.

Before we begin with the differences, there are a few obvious things that are common in both the devices. Both of them run on AndroidTV OS 9.0, both support Google Play Store, both have Chromecast built-in, both support Bluetooth controller and Bluetooth headphones and of course, both can run streaming services like Netflix, Amazon, Hulu, HBO Max, CBS, etc.

The Mi TV Stick, as the name suggests, has a slimmer form factor. This makes it more apt to carry in your backpack and plug in any device that has an HDMI port. For instance, you are off on a trip (you wish in 2020), it’s easier to carry Mi TV Stick and plug it in your hotel’s TV or any TV source.

On the other hand, Mi Box S has a slim squircle shape. You can consider it to be about the size of a wireless charger. It can easily fit in your TV Case or around the set-top box. However, the HDMI cable supplied with the Mi Box S is fairly half a meter long. Hence, if you decide to keep it at a distance from your TV, get a suitable HDMI cable.

The other factor that makes Mi TV Stick more portable is the USB power source. The Mi TV Stick can be powered with your TV’s USB port via a micro-USB cable. In case your TV doesn’t have a USB port, you can power the Mi TV Stick via a power bank or a power adapter.

The Mi Box S is powered by a propriety AC adapter and it isn’t as versatile as Mi TV Stick.

The smaller form factor and a price tag of Mi TV Stick come with a few bargains. The biggest of them is that the Mi TV Stick can only run up to 1080p whereas the Mi Box S runs up to 4K. In case you have a 4K TV at home, it’s sensible to get the Mi Box S. Having said that, both the streaming devices will also work on 720p or 1080p display without any scaling issues.

Apart from the 4k=K streaming capacity, Mi Box S has an additional USB and 3.5mm headphone port. In case you have a headphone or a sound system, they can be directly plugged in the 3.5mm port for audio output. The USB port can be used to plug in your SSD or USB stick for offline videos or movie watching.

Comparatively, the Mi TV Stick only has a micro-USB port which is used as power input. The micro-USB port doesn’t support OTG as Firestick does, hence you cannot plug a storage device via a USB splitter.

Mi Box S is priced higher and obviously comes with better specs. Both of the streaming devices have the same Mali-450 GPU but the Mi Box S has a higher clocked CPU at 2.0 GHz compared to the Mi TV Stick at 1.2 GHz. This CPU difference can be felt in real-time gaming performance on the Mi TV Stick.

The Mi TV Stick also has a lesser 1 GB of RAM compared to Mi Box S’s 2 GB of RAM. This difference was also quite noticeable while switching between apps. The Mi TV Stick is only good for video streaming. Apart from that, it’s borderline unusable when it comes to gaming or multi-tasking.

While streaming Netflix and Amazon Prime works flawlessly on both Mi Box and Mi Stick, in our testing Mi Stick lags while playing games such as Asphalt. Also, switching between various install apps takes quite a while on Mi Stick.

Mi Box, on the other hand, handles gaming and multitasking far better than Mi Stick.