Xiaomi Mi TV Stick vs Amazon Fire TV Stick – Which One to Buy? 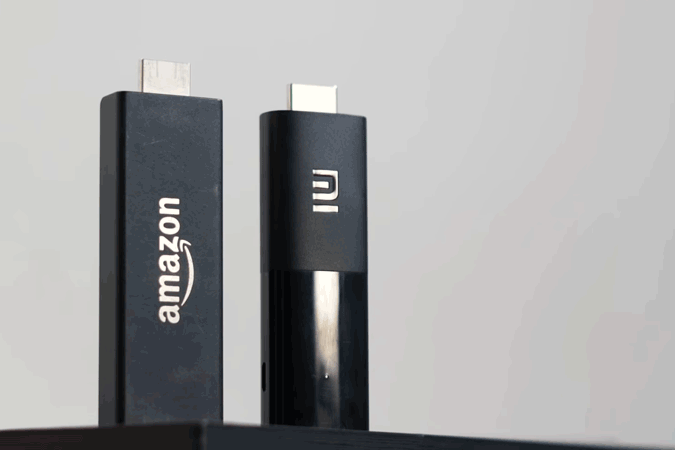 Xiaomi recently launched the Mi TV Stick at $49 global and 2,799 INR in India. This bring it in direct competition to Firestick available at $39 or 3,999 INR. Both of them have the same functionality – convert your old TV into a smart TV. So, the obvious question is – “What’s the difference between Mi TV Stick and Firestick?”. Well, the short answer is Firestick for most people, and here’s a rundown on what’s the difference between them.

Before we begin let’s take a look at what’s similar between Xiaomi Mi TV Stick vs Amazon Fire TV Stick:

1. Both have a similar design

Both the sticks have a stick-like (hey!) design with an HDMI port in the front and a micro-USB port at the side. However, there’s a small thing worth noting. In case your TV has 2 HDMI ports side-by-side, it would be hard to use both the ports at the same time since the sticks are chunky and take up space. As a solution, Firestick offers an HDMI extender out of the box whereas Mi TV Stick doesn’t.

The Firestick and the Mi TV Stick supports a maximum resolution of 1080p at 60 Hz. In case you have a 720p TV, both can scale down and adapt accordingly.

3. Both can play Netflix, PrimeTV

Both the streaming sticks offer Netflix and PrimeTV support out of the box. In case you are a Hulu subscriber, there’s Hulu and ESPN+ support as well.

Although do keep in mind, due to licensing restrictions, HBO max and CBS Peacock is not available on Firestick yet. However, you can sideload the android apk. On Mi stick, both streamings services work right out of the box.

Both the Mi TV Stick and Firestick can seamlessly connect with either a Bluetooth audio device or a controller. We tried pairing the Sony PS4 controller with both of them and it worked well. Moreover, if you have a Bluetooth audio system or soundbar, they would also work well with both the streaming sticks.

Read: How to Connect and Map PS4 Controller to Android TV?

Both the sticks have 1 GB of RAM and 8 GB internal storage. In terms of performance, we found that both devices are capable of streaming 1080p without any hiccups. However, gaming is out of their league.

The most essential difference between Firestick and Mi TV Stick is the operating system they run on. The Mi TV Stick, similar to Mi Box, runs on Android TV 9.0. Whereas, Firestick runs on Amazon’s FireOS. Both of them have all the streaming apps that you would crave for i.e. Netflix, PrimeTV, Hulu, ESPN+, etc.  So, in the case of streaming, things are more or less similar on both ends. However, Android TV is more app focused whereas Firestick is more content-focused which is clear from the homepage of both the sticks.

Additionally, Android TV has more app support and games as compared to Firestick. But, considering the subpar specs on Mi Stick and Firestick, you wouldn’t prefer gaming on any of them.

Both Firestick and Mi Stick are powered by a micro-USB port. You can plug in the micro-USB cable in your TV’s USB port or use an external adapter. But, in case, you plan to extend the storage on the sticks via an OTG cable then Mi Stick doesn’t support OTG. So, in case you plan on attaching your HDD for offline movies, Firestick is the better option.

4. Firestick has a better remote

The form and factor of both the Mi TV Stick and Firestick are identical. Both are made up of plastic with a rubberized texture to the keys. However, in terms of functionality, I would give a +1 to the Firestick remote. It has additional play/pause, skips, and mute buttons. On the other hand, the Mi TV Stick remote has dedicated Netflix and PrimeTV buttons.

Again, FireOS is more streaming content-oriented. Hence, the keys and FireOS optimizations are more expecting users to the only stream on the Firestick. Whereas, the Mi TV Stick is more of app-driven hence dedicated keys for launching apps.

Having said that, since Mi TV Stick is released in 2020, Bluetooth 5.0 should have been the standard.

Since Firestick is an Amazon product it’s compatible with Alexa. If you already own an Echo device, the Firestick would be more comfortable in that ecosystem. For instance, you can ask your Alexa speaker to even power on the Firestick.

On the other hand, Mi TV Stick has Google Assistant, courtesy to Android TV.

As I said in the intro, Firestick makes much more sense for most people due to the content-focused approach of Firestick and also a cheaper price tag. You can anyway grab a Firestick for as low as $30 in the evergreen Amazon sale. For more issues or queries, let me know in the comments below.