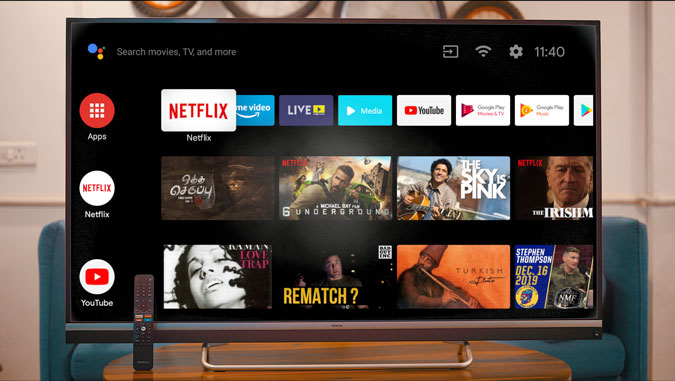 Nokia recently launched its first Smart TV in India in partnership with the e-commerce giant Flipkart. A 55-Inch TV  4K UHD with Android TV OS 9.0 out of the box went on sale from December 10th. Unlike the other players in the market such as OnePlus, Motorola, VU, etc, Nokia TV is only available in a 55-inch variant and priced Rs. 41,999.

Talking about the basic specs it comes with a quad-core processor and 2.25 GB of RAM and 16 GB storage. You can easily access the Play Store and download your favorite apps. Well, On paper the TV looks promising, but how does it hold up in real life, let’s find out in this in-depth review.

You get the 55-inch TV with 4K UHD resolution, a Bluetooth remote with batteries, a metal TV stands as well as wall mount along with few user manuals. You’ll be happy to know that the TV will be made and assembled in India under the government’s “Make in India” initiative.

First things first, I wouldn’t say it is the prettiest Bluetooth remote but it does trump in terms of functionality. I think what Nokia did is simply keep the foolproof traditional remote while adding smart TV accessibility options such as quick application buttons for Netflix, YouTube, Google Play and Amazon Prime. 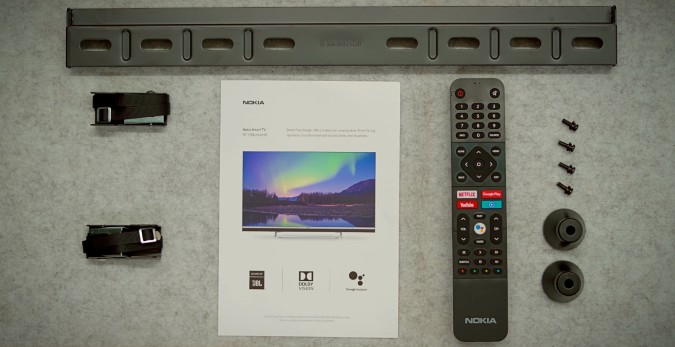 There are dedicated buttons for media play-ability as well, which comes in handy when you’re watching video content. The TV supports Google Assistant and for those of you who are curious, Yes, it does come with pre-installed batteries.

The remote also has small indication bumps in braille next to power, volume, and channel button, so it can be used by someone who is visually challenged as well.  This might not be functional for most of you but keeping this intricate detailing sure builds up company image.

While other TV manufacturers (reads Xiaomi) offer a plastic stand, the Nokia TV, however, comes with a chrome metal stand which is sturdy and also compliments the TV. You can also find an L-Type wall mount which I prefer for a 55-inch dimension for a better viewing angle.  The power cable is also removable. 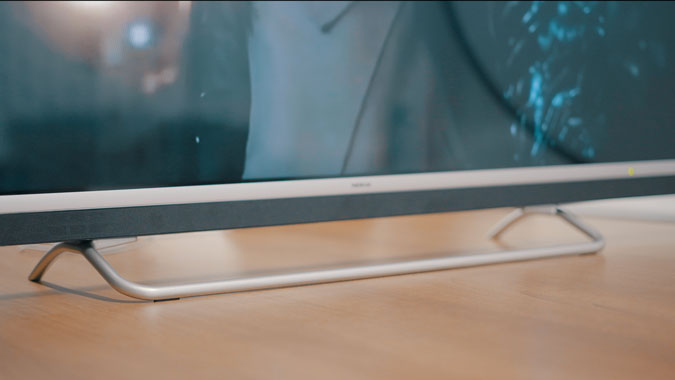 There are plenty of ports at the back of the TV. There are 3 HDMI ports so you can connect multiple devices without any hassle. There are 2 USB ports as well with one of them being USB 3.0. In case you’re using an old device or a set-up box that needs traditional audio-video, you have a port for that as well. In addition to all this, it has an ethernet port well. It’s unusual to see a digital optical port in case you have a dedicated soundbar or an audio system.

The Nokia TV has a 55-inch screen that supports 4K UHD resolution, 60hz refresh rate and boasts a 1200:1 contrast ratio. As soon as you install the TV you are greeted with slim bezels which gives you a wider viewing screen. It boasts of an ADS panel which enhances the viewing angle (178 degrees), so you won’t be disappointed with the color, contrast, and crispness regardless of where you stand.

Other features such as Intelligent Dimming which basically optimizes and auto-tunes the contrast. It processes the picture in real-time and dims selected LEDs for providing darker blacks. The company also claims the TV, to have a Wide Colour Gamut (WCG) which utilizes 40% more colors when compared to non-WCG TVs, so in a way, you not only have more colors but the ability to display the right color as intended. Imagine the ability to choose a color between Red and Cherry Red.

Grey Uniformity is a test to check whether the TV is able to display solid colors uniformly across the screen. The display seems to deliver in most of the situations but in terms of some darker shades, the corners, especially top right, and left do a bit vignetting.

If you’re a fan of Netflix and have subscribed to the 800 Rs UHD plan, you can access plenty of titles available specifically for Dolby Vision. To give you a better idea, while HDR works with the metadata applied to the entire content, Dolby Vision does that with a Scene-scene basis providing accuracy and more controlled processing which is higher in contrast and details.  The TV can hit a maximum brightness of 400 nits which I feel was enough with whatever content I consumed (besides the battle of Winter-fell).  If you watch a lot of sports content, the TV has MEMC (Motion Estimation/Motion Compensation) technology which is a video processing technology that generated frames to compensate motion blur.

The display is calibrated well out of the box, however, if you want, you can change the TV picture settings in the TV mode (Screen Saver). Simply go to the screensaver display and click menu on the remote. From Picture Mode tap to reach User mode, from here you can quickly tweak brightness, saturation, and contrast. If you want more settings you can tap more and click on TV Setting, besides what you’ve in Quick Menu, you’ve HUE, Gamma, Local Dimming.

Nokia TV has two 24W bottom-firing speakers from JBL which is fairly powerful, so I think there isn’t a need to buy a dedicated audio system if you’re just a casual user. 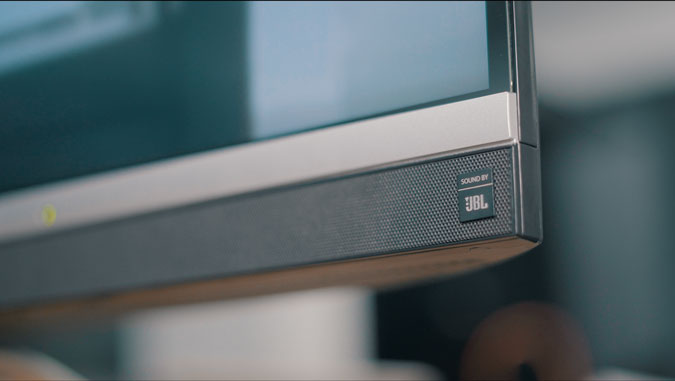 Placed at the bottom, the speakers look like an integrated soundbar, adding to the aesthetics of the TV as well. I played everything from classical to jazz and even Bollywood, in my opinion, it sure delivers a clear sound with rich high ends but in content that is rich in base a bit of tweaking the low end is necessary.

In terms of audio processing, it uses Dolby Audio, delivers crystal-clear audio and restricts volume jump while switching from one video to another. On top of that DTS TruSurround amplifies audio experience which creates a 5.1 channel surround sound output.

There is no audio jack so you’ve to rely on a Bluetooth device in case you want to use headsets. In terms of sound, you can tweak the bass, treble and change the output balance. There is an option to turn ON DTS TruSurround which is disabled by default.

Well, of course, this TV is an Android TV, so you’ll the pure Android Experience with skins like Pathwall found in Mi TV. Like I said you can access the Google Play Store, Download Apps, etc. The interface isn’t stock and is a bit tweaked in a better way, for example, a gradient when changing the volume makes it clear when viewing from a distance. 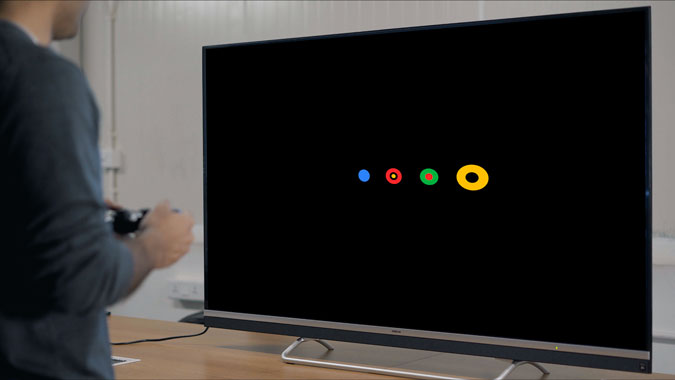 I tried updating the TV as soon as I got a prompt but that resulted in an hour-long boot loop, Fret not, we’ve already found a way to solve this.

The 55-inch Nokia Smart TV is available for Rs. 41,999 in India, exclusively on Flipkart. There is a 1-year warranty on the product but Flipkart does offer extension when you buy the TV. You can get a three-year warranty extension at INR 3,499 and a guaranteed 30% salvage value after 3 years in exchange besides the primary full warranty coverage.

In terms of after-sale services, it will be handled by Jeeves Consumer Services which is already in partnership with Flipkart for other consumer appliances as well.

Overall, Nokia TV is basically Flipkart’s aim to be competitive in the hardware market by using brand names that already have a brand value. The TV is an all-rounder in my opinion and collaboration with JBL and Dolby and TruSound support adds to the feature list. It seems sleek and sturdy and I didn’t find anything that bothered me much.