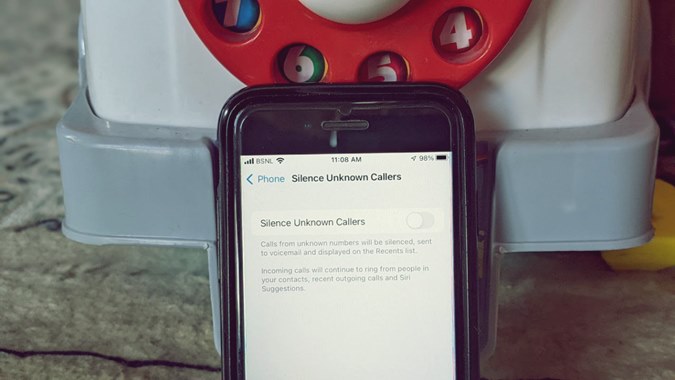 Unwanted calls have become quite a nuisance these days. One way to avoid them is by blocking such calls or putting your phone on silent. But both have drawbacks. What’s the alternative? Silence unknown callers. This feature was introduced in iOS 13 and continues to be part of the newer generations of iOS. But what is Silence unknown callers and how does it work? Find the answer here.

What Is Meant by Silence Unknown Callers on iPhone

Silence unknown callers is a feature on iPhone that automatically silences calls from numbers that aren’t saved in your contacts.

Assume you get a lot of calls from unknown numbers on your iPhone. The first thing you’d do is put your iPhone on silent to prevent those calls from bothering you. However, as expected, it would mute calls from people in your contacts too. You can use one of the Focus profiles to mute calls, but you must manually allow people from whom you want to receive calls.

This is where Silence unknown callers feature comes in handy. What this feature does is that it automatically filters numbers not in your contacts and silences calls from them.

Think of this feature as iOS automatically muting the calls on your behalf based on who is in your contacts and who isn’t.

What Happens When You Silence Unknown Callers on iPhone

When you enable the Silence unknown callers, any phone call that you get from a number that isn’t saved in your contacts will be silenced on your iPhone. This applies to just normal calls and not for calls from apps like FaceTime, WhatsApp, etc.

Do note that the phone will still ring but you won’t hear the ringtone. Such calls will appear in recent calls history and you will receive a missed call notification as well. That is, you can still see who called you and then decide whether you want to call them back or not. Moreover, if voicemail is enabled, the call will automatically go to the voicemail.

Note: iOS automatically disables this feature temporarily for 24 hours if you place an emergency call.

Since Silence unknown callers doesn’t block the people, the other person doesn’t know that you have enabled this feature. The phone will ring normally on their end for the entire duration after which it will be routed to voicemail if enabled. If voicemail isn’t enabled, the call will end just like a regular call without leaving any hint of this feature.

Silence Unknown Callers vs Do Not Disturb

But as mentioned before, this feature also silences notifications and alerts from other apps. You will have to manually add apps to the exception list in Do not disturb mode to receive their notifications. In a nutshell, DND mode puts your entire phone on silent mode.

This isn’t the case with the Silence unknown callers feature where it simply silences regular phone calls from unknown numbers without affecting other calling apps or any other app. Moreover, with this feature enabled, your iPhone won’t ring even if an unknown number calls you multiple times in a row, as is the case with Do not disturb mode, which allows repeated calls if its setting is enabled.

Do not disturb mode offers other features like scheduling, home, and lock screen customization, sharing across devices, and the ability to enable or disable from Control Center. None of these features are available for Silence unknown callers.

Block is a step that you should take when you want to stop calls completely from someone. Your phone will not ring and neither you will hear the ringtone when the blocked person calls you. As expected, the blocked person will know that something is wrong since the calls won’t connect. You have to manually block people whether they are saved in your contacts or not. To block someone, go to Settings > Phone > Blocked contacts.

On the contrary, Silence unknown callers is an automatic feature that doesn’t inform the caller and only silences call from unknown numbers.

How to Enable or Disable Silence Unknown Callers on iPhone

2. Go to Phone and tap on Silence unknown callers.

3. Enable the toggle next to Silence unknown callers.

How to Add a Silence Unknown Callers Shortcut

Sadly, iOS doesn’t offer a way to enable or disable the Silence unknown callers feature from Control Center. However, you can quickly turn it off or on using a Shortcut.

1. Install the Apple Shortcuts app if it isn’t installed on your phone.

2. Open the Silence unknown callers shortcut link on your iPhone. Tap on the Add Shortcut button.

3. Launch the Apple Shortcuts app and you will find the SUC shortcut under the My Shortcuts tab. Touch and hold it and select Details from the menu.

4. Tap on Add to Home screen followed by Add on the next screen.

5. The shortcut will be added to the home screen. Tap on it to open the Silence unknown callers setting screen from where you can enable or disable it quickly.

Tip: Check out other cool shortcuts to use on iPhone.

1. How to Fix Silence Unknown Callers Not Working Issue?

If you are receiving calls from unknown numbers even after enabling this setting, make sure the number isn’t in any of your emails or messages. Also, verify that you haven’t contacted them from your end. If that’s the case, clear your recent calls history.

2. Can You Call People Whom You Have Silenced?

Yes, you can call the silenced numbers. The numbers will appear in the Recent calls from where you can contact them. But after you contact them, they will no longer be silenced.

The Silence unknown callers feature helps in muting unknown numbers only. Learn about how to silence some notifications on iOS. Also, read our guide on what do various notification settings mean on iPhone.