While there is no shortage of apps that record audio on iPhone and iPad, not all apps are made equal. Some are better suited for students for hours of recording, others are built for journalists to record interviews. Even though you could buy a cheap Dictaphone from Amazon but why spend money, when you already have an iPhone with a perfectly capable microphone. We did the heavy lifting for you and here are some of the best voice recorder apps for iPhone that would help you out in many situations.

In case you’re looking for voice recorder apps for Android, we have got you covered.

Easily sync on iCloud and works flawlessly with Apple Watch

Voice Memos is the voice recorder app offered by Apple themselves and has features that should satisfy most users. You can do some basic trimming on those long recordings. With the latest iOS, the app makes finding the files easier by embedding the geolocation to the memos.

Voice Memo can record audio in the background but my favorite part is that it even works with your Apple Watch. So next time you get a multiple-billion startup idea while you are taking a shower, you can use this app. 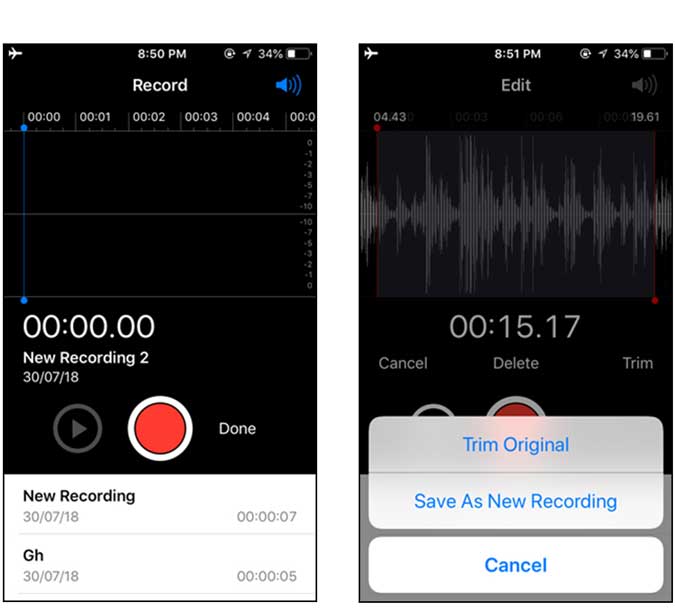 However, it lacks a few basic features like you can not share large audio files or take text notes while recording audio side by side. Nevertheless, the apps listed below have those features and can be more useful.

Features 4-layer track recording along with an inbuilt metronome

Multi-Track Song recorder can record up to 4 sounds and overlay it over each other. MTSR has a simple UI, the main page has 4 rows of recording icons and you begin with recording one by one. These files are then combined and can be edited to play at definite time intervals or at the start. 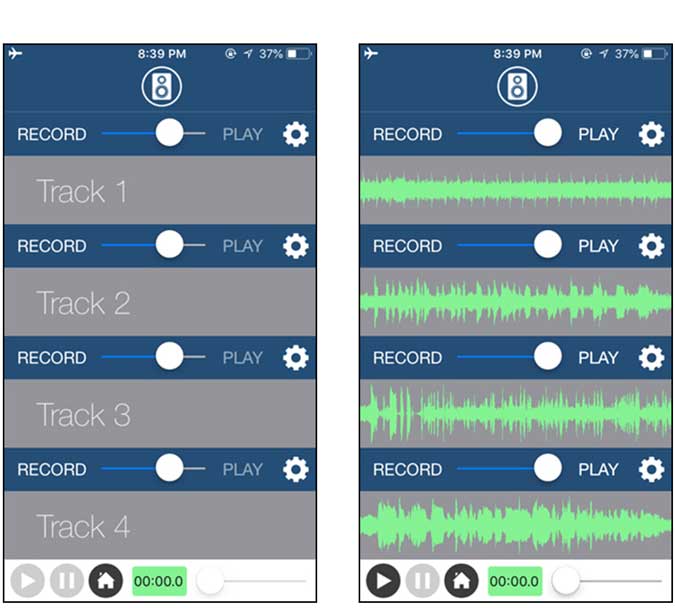 Exporting is easy and you can send it through email, iTunes, or Dropbox. You also get a metronome that you can use to sync the beats of your track.

iTalk is a simple voice recorder that lets you record audio files and share them directly to SoundCloud. You also get the option to adjust the sound quality.  After that, you can begin recording and it shows the current size and length of the file. You tap the button again to stop the recording your file is saved to the phone. 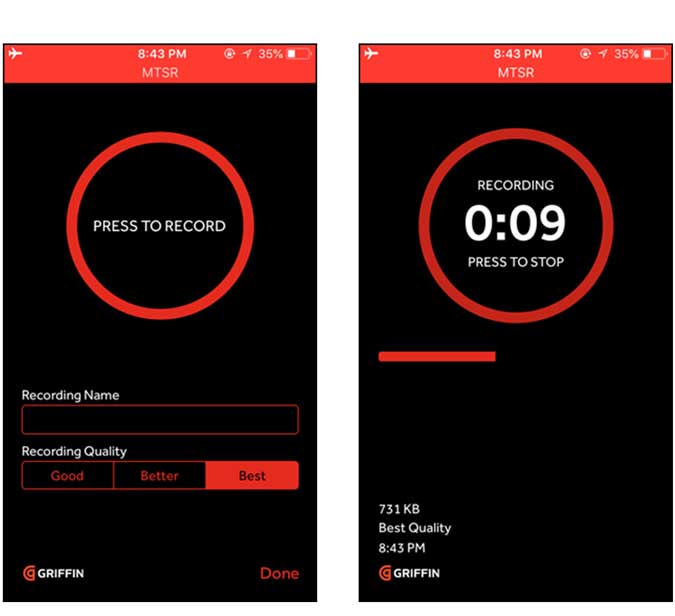 You can add notes to the recording after which makes it a little more relevant while keeping track of a large number of files. The free version just lets you record and listen to the files. However, if you want more features you can unlock them with an in-app purchase, which would give you control options like fast forward and backward.

Like all the other voice recorder apps for iPhone, AudioShare also lets you record, trim, and share the audio file. But what really makes it different from all the other apps in the list is the Inter-App recording, meaning it can record audio from other apps like the synthesizer app, or from your guitar amplifier sim app. Audioshare lets you make music with just a phone and its features are worth looking at if you like working with beats and sounds. 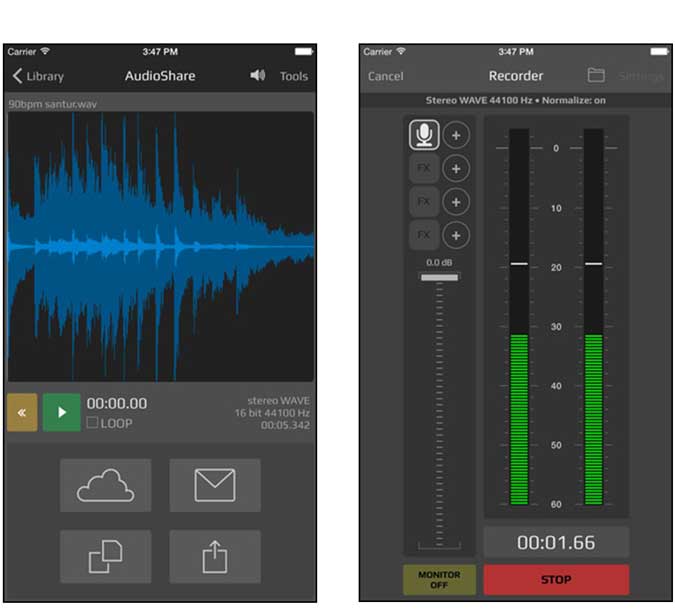 It might look a little complex with all the soundwaves but it’s fairly easy to use. You can Organize all your sound files and MIDI files on your device. Record, trim, convert, normalize, transfer, export, import, zip, unzip. Create folders, rename, and move files and folders around, put everything where you can find it.

Lets you add tags to audio recordings for better organization

Awesome Voice Recorder records audio on the go and lets you tag important events of the recording. You can pause the recording and continue where you left off afterward. This feature alone makes it great for note-taking. You get a tag button that sits on top of the audio spectrogram, which displays the recording length of the file. All of your recordings are saved in a folder that you can customize and even set a passcode for more privacy. 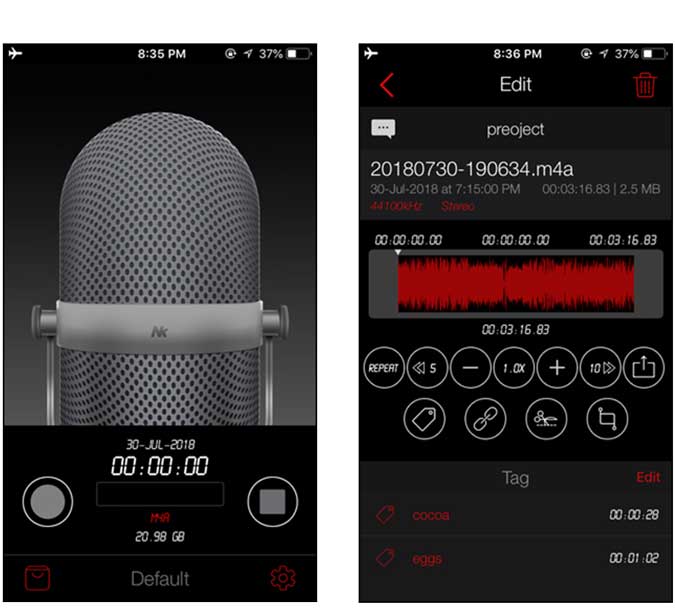 You can edit, adjust speed, trim, and join two or more files. You can add or remove tags after the audio has been recorded and optimize the recordings with it. There are many options with which you can share the files, WiFi, Email, Dropbox, SoundCloud, and Airdrop are a few.

This app is perfect for recording a lecture. This app transcribes the files with up to 80% accuracy as they claim on their website but that totally varies in real conditions. The UI is reminiscent of a tape recorder which I really dig. However, there are locked features behind a paywall that gives you an option to transcribe all your recordings. Plus you get passcode protection on your files for added security.

Must Read: 4 ways to put movies on your iPhone/iPad 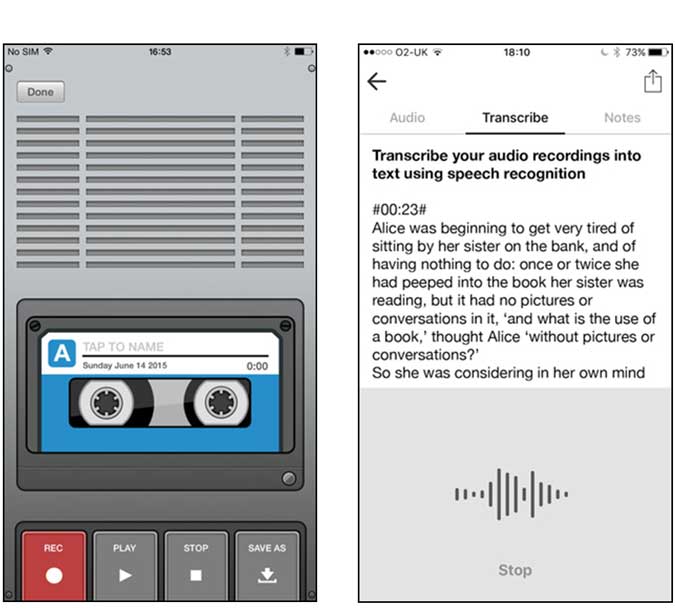 One of the more advanced recorders on the app store, VRP is full of intuitive features that would be very useful for a journalist but you can also use it as a personal recording device, just like a dictaphone. 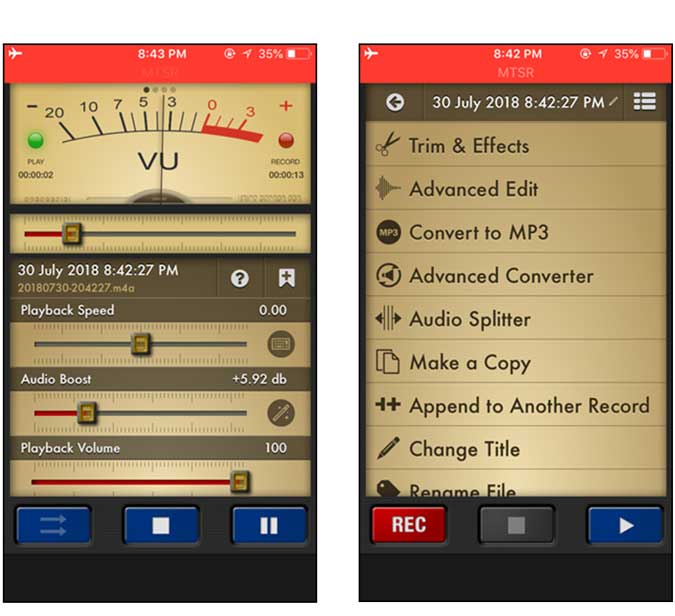 There’s a dedicated silence detection bar which you can increase or decrease to change the sensitivity. The dead air is automatically removed from the final clip based on this bar.

You also get the option to add tags that would help you sort files later. Once the recording is finished and you get the option to share the file in multiple ways. You also get a few editing features including trimming, append, effects (echo, reverb, volume, distortion, etc), and add notes.

As much as students hate taking notes, it is still important to keep notes and this app comes as a godsend. I am not exaggerating at all. AudioNote2 is a digital notebook with a sound recorder built-in. Just get to your next class with this app and you’ll know how easy it makes the process.

The notebook-style layout isn’t just for show but each line takes input as text from the keyboard or the pencil mode where you can write naturally. The notes are automatically timestamped making note-taking super-efficient. 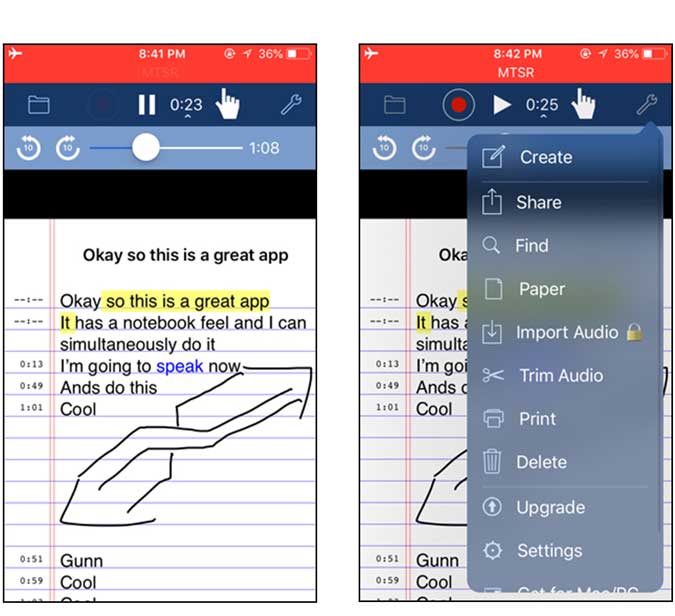 The recordings are saved on iCloud and you can choose Dropbox or even your phone to save the file. Sharing is easy and you can do it on multiple platforms. Other features like import audio from the phone and higher quality recordings are available in the paid version. 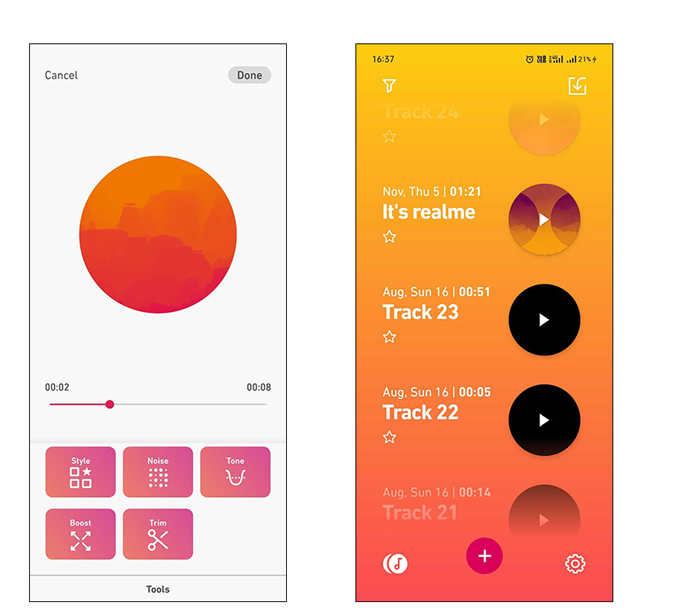 The app has few inbuilt audio editing tools. You can tweak properties like bass, treble, audio level, and adjust the noise reduction. If you want to polish your audio more, simply enable the Dolby sound, put on your earphones, and enjoy the recording. 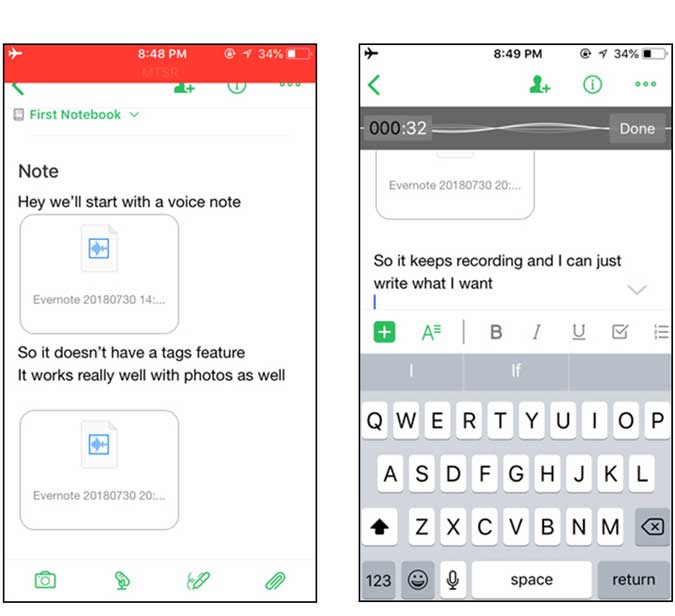 You open Evernote and it shows you an empty page with many options on the bottom. It can add pictures, doodle, attachments, and audio recordings to your notes. You don’t get advanced features with these apps, however, if you are already using OneNote and Evernote for note-taking, it makes sense to use them instead of downloading a third-party app.

Download EverNote and OneNote from the Appstore (free, in-app purchases).

These were some of my picks of voice recorder apps for the iPhone. While music lovers looking to create music using their voice can use Audioshare and MTSR, HT Professional Recorder and Clear Record are for people looking for an app to record lectures and business meetings.

If you want to transcribe your recordings Voice Recorder and Audio editor would be the right choice. Evernote and AudioNote2 are best for notetaking and are very popular among students. What do you think? Which app would you use to record voice on the iPhone? Let me know in the comments below.

Read 7 Best Equalizer Apps for Android For Every Music Lovers