I’m often stuck in situations I don’t want to be in. Whether it’s a boring date or another intolerable meeting. I’m sure you can name any number of situations similar to this where all you can think is escape. I’m not sure what you do, but I use the fake call application on my phone. I can schedule it before or get a call instantly just with the press of a button. Not only that, I can feed in caller details manually or choose one from my contacts. Then it’s purely my dramatic skills to act freaked out and escape!

I’m sure you also face the same issue and want to get out of them. So, here are my picks of 5 best fake incoming call apps for Android and iOS.

Well, it has a very straightforward UI, to begin with. You’ve five basic functions that you can tweak according to the situation. The first one is a timer where you can set the duration for the call to ring after pressing the start call. Although there is no option to set a custom time, you can choose from a minimum of 3 seconds to 1 hour. Next, you set the caller’s profile by filling in the name and picture. You can also choose someone from your contacts as well, which will automatically detect their picture. In addition to that, you can change the ringtone and enable or disable vibration. 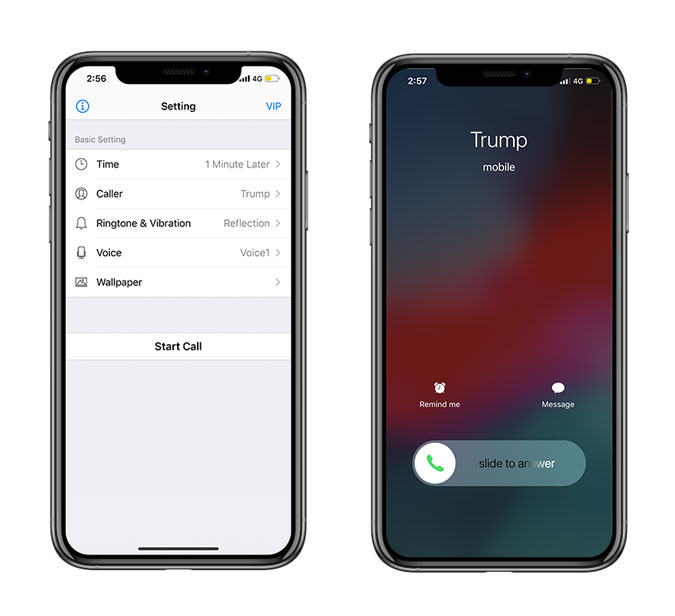 The app also takes care of the receiver, so you can select from the three default voice options that’ll be played through the receiver, for added fakeness. Lastly, you choose to return to the real home screen after the call has ended or choose a fake one. You have the option to add custom images from the gallery for both home screen and call background picture.

Get Fake Call Plus on iOS

Let’s assume you have a meeting coming up tomorrow, you know at what time it is and you also know that you are in no mood of attending it. Fake Call Number will let you set a time in the future, be it the next day or a month after. Just choose a date and time of the day and you’re set. However, there is one thing you must do to activate it, which is pressing the call button in the app and keep it running. 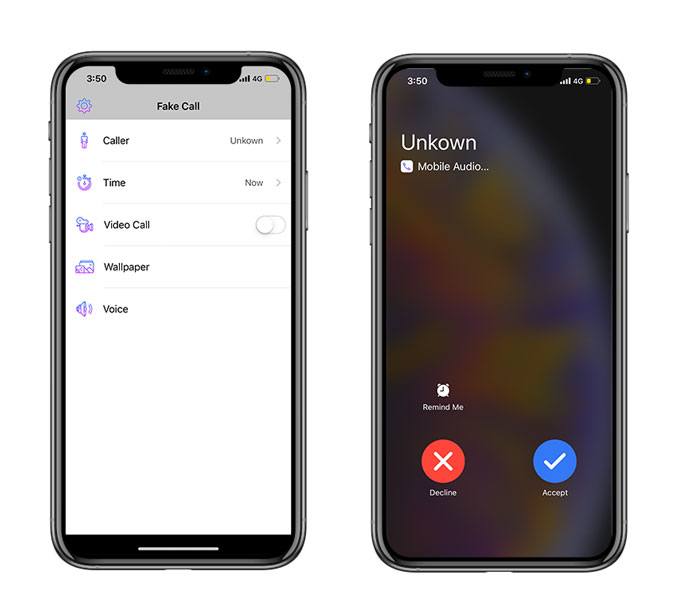 Besides that, you have similar features like other Fake Call apps like setting up calls name, custom call screen and pre-recorded voice to be played during the call.

Note: Out of the many apps I tried on iOS, none could trigger the call with the app in the background.

Get Fake Call Number for iOS

Although it is marketed as a prank call app, it fulfills our criterion in every sense. It not only has a fake call feature but unlike the apps I have listed, you can generate fake SMS as well. To give you an over-view the app has three sections, Fake Call, Fake SMS, and History. Talking about Fake SMS and History section which are missing from other apps, you can fill in name, number, time and the content of the message. There is an option to choose a saved contact as well. 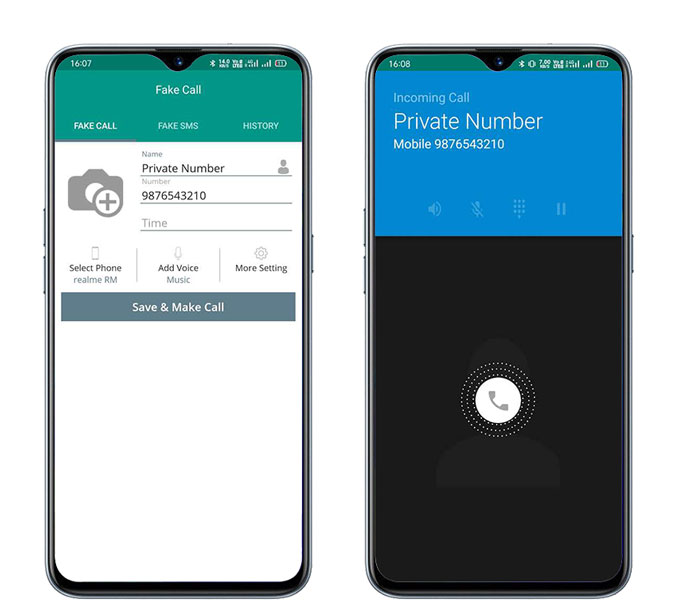 On the other hand in the fake calls section, you start by adding the same details like name, number and time as you did with Fake SMS. In addition to that, there is an option to choose custom skins from various Android and Samsung devices. You can change the ringtone, enable vibration and even set a total call duration after which it’ll be automatically disconnected.

Get Fake Call for Android here.

What sets this app apart is its ability to trigger fake calls because you don’t always have the time to open an app and set a reminder beforehand, but before that, let’s get an overview of all the features. The home screen has four main options. You can set the contact information manually, select a contact or choose from a contact template. You also have the option to choose a custom call screen similar to the Fake Call Prank app. 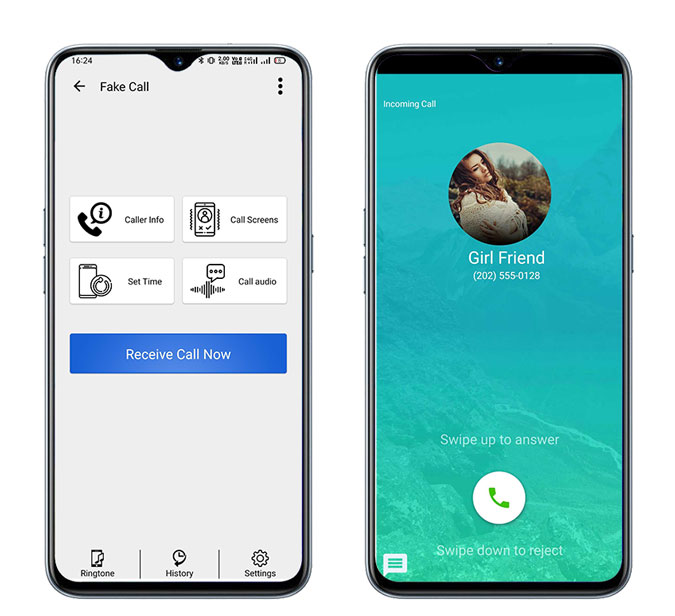 The trigger options can be set through the settings menu which is at the bottom along with the call log and ringtone option. You can enable mobile shake to receive a fake call or choose to press the power button four times to activate it. I tested both these settings and they seem to work perfectly.

If you are a US user, this one will work for you. Text to Escape is an IFTTT recipe. IFTTT (If this then that) is an amazing little tool, think IoT for services, that connects a number of products and services allowing you to set conditions. When a specific condition is met, it will trigger a response.

Note: You can add 00 as prefix if you’re outside the USA, but it might not always work. 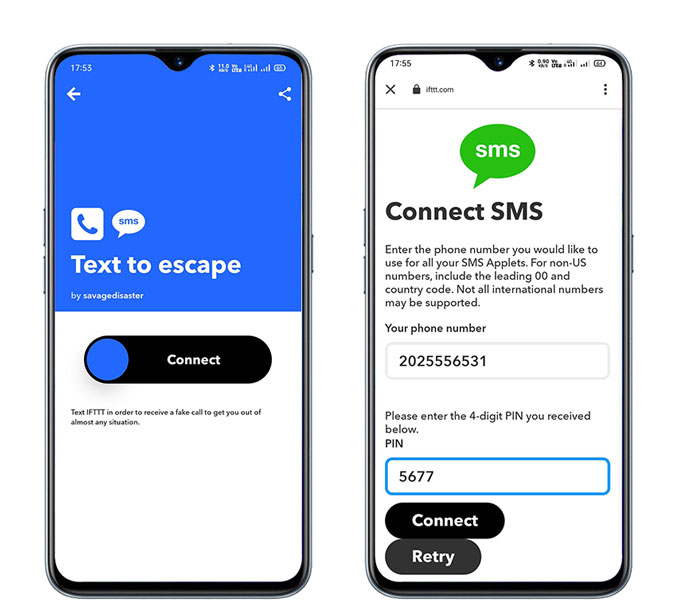 For example, this particular recipe will allow you to receive a fake incoming call playing a voice recording of your choosing once you text IFTTT’s SMS channel. IFTTT will need you to verify your phone number with an OTP and give necessary permissions. Here is Text to Escape Recipe before this download the app from below.

Get IFTT for iOS | Android

Using Fake Calls is a great option to escape a situation but you shouldn’t always do so. But if these situations are frequent for you, you can try the Fake Call App for iOS and trigger your way out of situations. On Android, all the options are great but personally I’d choose Fake Call Incoming App for its simplicity, no use of third-party ads and also trigger options. IFTT can also be considered as it not only can help you with fake calls but a lot of other automation tasks as well. So, here was my list of 5 best fake incoming call apps for Android and iOS. If you’re another trick under your sleeve, do leave a comment.