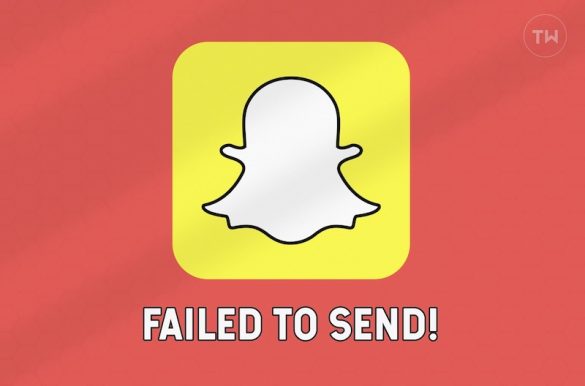 Even though the social media space is dominated by the likes of Instagram and Twitter, you can’t ignore the impact of Snapchat on users. It’s popular among the young audience and users love the platform for disappearing messages, stories, and snaps. The problem occurs when you continue to get errors while sending a snap. Here’s how to fix Snapchat not sending snaps on iPhone and Android error.

Snapchat not sending snaps can be due to multiple factors. We will cover both the iOS and Android platforms here. Let’s start the list with an obvious reason.

1. You Are Unfriended by Recipient

Similar to any other social media app out there, Snapchat allows users to unfriend someone from the friends’ list.

Imagine a scenario where you are friends with someone on Snapchat and for some reason, he/she has unfriended you. Now, you can technically send a snap to the other person but the recipient won’t receive it until he/she adds you to the friend list again.

You can go to your profile > My Friends and check your current friends list.

Snapchat uses the built-in mobile camera to send snaps. You need to give the app relevant permission to access the camera on your phone. Here’s how.

On Android, long-press on the Snapchat app icon and open the app info menu. From the Permissions menu, enable Camera for Snapchat.

iPhone users can open the Settings app on scroll down to Snapchat. Enable Camera from the following menu and now Snapchat is all set to open Camera viewfinder to send snaps.

With stories, snaps, and other resource-hungry data options, Snapchat can be hard on your mobile data. You may have disabled mobile data toggle from the Snapchat Settings menu on iPhone. If that’s the case, the app won’t be able to send snaps. You need to enable it from the Settings menu. Here’s how.

1. Open the Settings app on iPhone.

2. Scroll down to Snapchat.

3. Tap on it and enable Mobile data toggle from the following menu.

If Snapchat servers are having a rough day (sometimes they do), you will face a number of errors throughout the app. Users won’t be able to send or receive snaps, messages, add stories, and more.

You can go to Downdetector and search for Snapchat. If you notice heavy outrage spikes, it confirms the issue with Snapchat.

You don’t need to do anything. Let Snapchat fix the issue from their side. You can check the latest Snapchat updates from the official Snapchat account on Twitter.

Even with Snapchat’s renewed focus on the Android platform, it’s a known fact that the app runs better on iPhone than on Android.

If you are facing glitches with the Snapchat Android app, you can force close all the operations and reopen the app. Here’s what you need to do.

Long-press on the Snapchat icon and open the app info menu. Tap on Force stop and try to send the snap again.

Just like any other Android app, Snapchat collects cache in the background to improve loading times and other cached data. Overburden of such cache data can lead to issues such as Snapchat not sending snaps.

1. Long tap on the Snapchat icon and open the app info menu.

2. Go to Storage and cache and tap on Clear cache.

From now on, you may notice longer loading times as Snapchat is loading everything from scratch. But the ability to send snaps should start working now. It’s a trade-off.

On iPhone, you can go to Snapchat Settings > Account Actions and use the Clear Cache option.

Snapchat regularly updates the app with new features and bug fixes. Snapchat not sending snaps might be due to an outdated app build on your phone. You should update Snapchat to the latest version from the App Store or Google Play Store and start sending snaps again.

Wrapping Up: Send Snaps on Snapchat

Are you trying to send snaps on a slow Wi-Fi connection? That might lead to Snapchat not sending snaps. If you are blocked by someone, you can’t send snap either.