Home » Internet » Signal vs Threema: Which Is Better Messaging App

Signal vs Threema: Which Is Better Messaging App 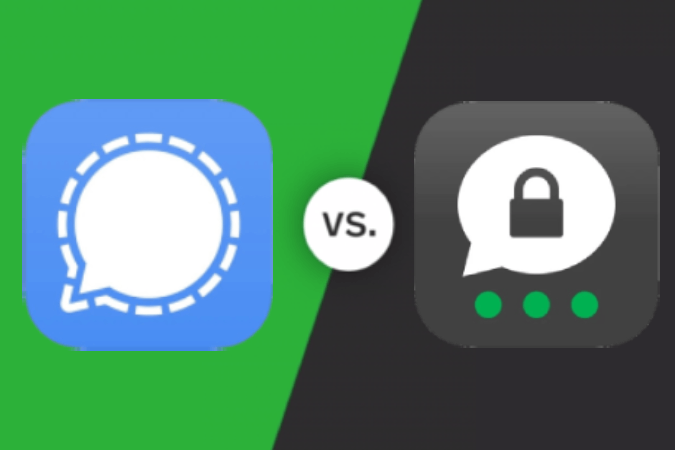 The Signal messaging app saw a steep rise in the number of users after WhatsApp updated its privacy policy. So much so that even Elon Musk suggested users replace WhatsApp with Signal. While Signal can be an easy first choice for privacy fanatics, another messaging app called Threema based out of Singapore is often pitted against Signal in multiple tech forums. Unlike Signal, it doesn’t require your phone number to sign-up, which is why I gave the app a try. Now before you draw conclusions and install either one of these apps, we will compare Signal vs Threema to give you a holistic perspective of which messaging app should be your top choice.

The reason Threema found a place in our list of best secret texting apps is primarily because of anonymity. As soon as you use a personal identifier to register for a service (however secure that may be), you are giving away a part of your identity. The idea of using a phone number to register didn’t appeal to me. Threema’s sign-up process is flawless as you do not need any personal information to register and use the app. Rather it generates a unique code for each user that can be shared with others when starting a chat.

On the other hand, when you first register for Signal, you need to feed in your phone number. Hence, it is necessary to have an active connection that can receive messages (OTP) when you sign-up.

With over 100 million downloads and 40 million active users on Signal until January 2021, it’s one of the fastest-growing messaging apps. This figure makes Threema’s user base look pea size with approximately 10 million users. So chances are most of your contacts are already on Signal. Since Signal’s user base is huge, there is no need to ask your friends, family, or other contacts to specially download the app in order to talk to you.

This is the same argument when it comes to WhatsApp vs other messaging platforms. Since WhatsApp is so widely used and some manufacturers even pre-install it with the new phones, it automatically becomes the first choice.

Both Signal and Threema allow users to create groups. Singal app allows you to make a group for up to 1000 users. On the other hand, Threema is still pretty restricted and caps the number of users to 256. Besides that, there are some handy features that make each standout. For example, Threema allows you to create polls which isn’t an option in Signal. Likewise, being able to group video call is a sought-after feature that is missing on Threema.

Signal also features disappearing messages in groups for both messages sent and received. You can choose a time starting with 30 seconds to 4 weeks or set a custom time as well. This makes Signal’s group features very contemporary. Features such as large user group support, disappearing messages, and video calls are a must when more and more organizations are using these platforms for daily operations.

Platform availability is a major factor in any messaging app nowadays. Whether you’re working on your laptop or phone, access to messages should be a blink away. The signal app is not only available on iOS, Android, web but also has a desktop app for Mac and Windows. In comparison, Threema can just be downloaded on iOS and Android in addition to the web version.

If you trying to find an app and use it professionally for a small team, I highly recommend going for Signal. It not only allows voice and video calls on mobile but on the desktop app as well.

Self disappearing is one of the main factors when we talk about privacy in-app. You can enable it with friends, family and it even comes in handy while talking to strangers in any chat head. If you are a privacy fanatic, you can make use of the disappearing messages option in both private and group chats. Couple this with the setting to disable screenshots and you get a fool-proof chat. Threema doesn’t score a goal on this point as there is no disappearing messages option in the app.

In our opinion, current implementations of self-destructing messages provide a false sense of security due to insufficient reliability. We suggest securing your device and the app with a strong password or code.

While this may be true, self-destructing messages are an added layer of security that should be left on the users to enable or not just like we see on Signal and WhatsApp.

Signal has been the industry leader when it comes to privacy. It is lauded by experts and users alike. However, privacy is put at stake on various levels as I have mentioned before. Signal mandates you to share your phone number which is a personal identifier. Since it’s based out of the U.S, it’s is subjected to the law of the land that may require authorities to access the service provider’s data.

Another point to consider is the servers. While Signal’s servers are completely open-source, Threema’s isn’t. However, you can add contacts without being dependent on a directory server on Threema which is not the case with Signal. If you are concerned about security audits, both Signal and Threema have been audited in recent times and generally considered safe to use.

There is no debate that people prefer free apps and services over paid ones. It a major reason why the user base on Signal is substantially large when compared to Threema. To put it into perspective, in order to use Signal, all you have to do is search for the app and download it. Threema on the other comes at a cost of $2.99 which presumably shoves users away. Moreover, Threema doesn’t have a trial version that allows people to try it out before buying. While three dollars isn’t a big amount for most, it can keep many users at bay.

So which one should you choose between Signal and Threema? Well, Threema checks a lot of boxes like security, exclusive features, and most of all, anonymity when you sign up for the app for the first time. Both have a few nifty features like native blur option, basic photo editor, privacy settings, etc. in common. So if you ask me which one to choose, I’d say pick Signal. It’s secure but majorly, it enjoys a large user base which makes it easy to connect with others (plus it’s free).

Also Read: Signal vs WhatsApp: Which Messaging App Is Better for You