From a weekend party to the housewarming. Karaoke is a form of entertainment where you sing along to pre-recorded music with a mic. It has been around for decades and now just like everything else, we have an app for that. Let’s take a look at the best karaoke app for Android and iPhone.

Best for PS consoles as a wireless mic

If you have a PS3 or a PS4, you can use it as a Karaoke and have loads of fun. Singstar officially available on PS consoles is a great Karaoke app. It transforms your Android and iOS smartphone into a wireless mic which you can use while singing your favorite songs on karaoke. You just have to be on the same network as your console and install this app and that’s pretty much it. It would automatically connect to the Singstar game on the console and convert your phone into a wireless mic. 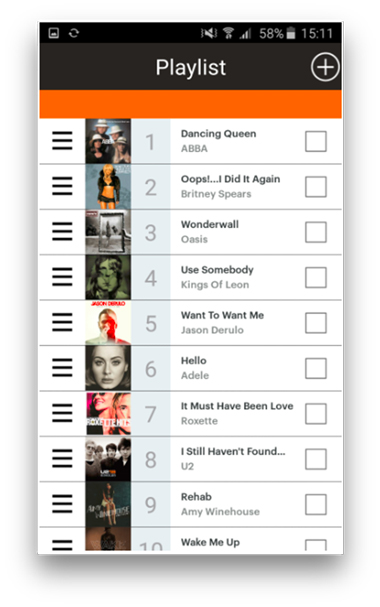 When you’re connected you can play against a friend and see who sings better. Singstar is a classic party game which allows you to play with multiple friends and record your performances. The app also has a feature to create a playlist to keep the fun going.

Karaoke by Yokee brings out the bathroom singer in you and lets you record karaoke sessions with video and share it with your Friends.

You can browse the popular songs according to your region or genre. When you’ve found your song you can begin to sing along. The video is on as a default option which you can turn off. Headphones are recommended for better quality audio and one quirky feature of this app is that you can hear yourself through the headphones which let you maintain your pitch. 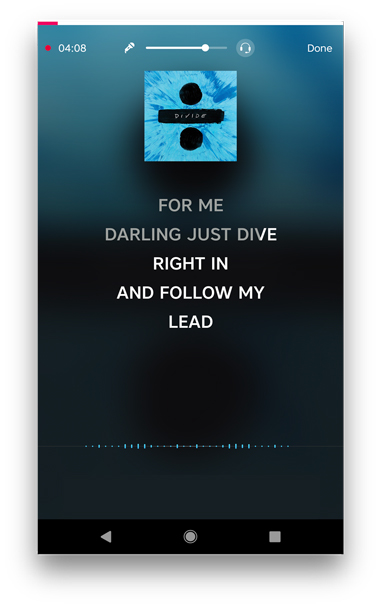 Once you finish or you choose to end it early, you get a few edit options. You can change audio effects to studio, hall, echo, star, and radio. If you’re out of sync you can adjust that with the help of sync bar and scroll it to find the sweet spot.

The free version doesn’t let you save any recordings or share it online for that matter. You need a VIP pass to access that which you can buy if you wish to do so.

Best for practicing and singing alone

Sing & Record is yet another karaoke app that lets you sing and record your favorite songs.

RedKaraoke offers a very user-friendly UI and the option to record your karaoke session is in the middle of the bottom bar. 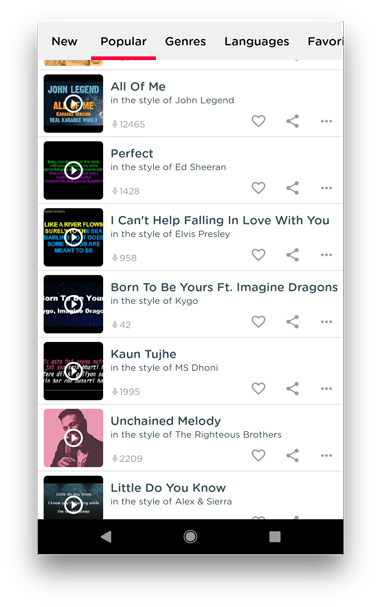 To begin your session you just select your favorite song and choose one of the two options. You can either sing to practice or you can record to publish as well. Most of the features are accessible in the VIP section which you can avail by purchasing or record in the default settings without video recording. The subtitles are synced with the songs and you can easily follow the lyrics by following the highlighted part of the words. 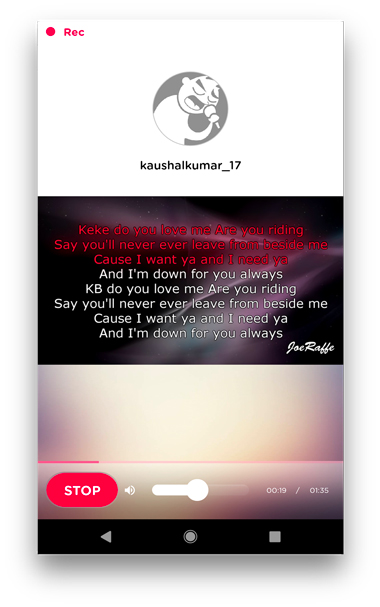 Once you’re done with the session you can press the stop button and it would take you to the next page. The free version offers to sync vocals to the music if it sounds off. You can change the vocals-music balance by scrolling the bar. Adding sound effects is only available to the paid users. After renaming the file, adding a description you can publish it to the public. Keeping it in private is only available for the Paid users so you might keep that in mind.

Best for creating your own karaoke sounds

This app converts your MP3 songs into karaoke and lets you create new recordings.

SingPlay doesn’t source its songs from the internet but relies on your phone’s music library and generate karaoke soundtracks by automatically eliminating vocals from a song. 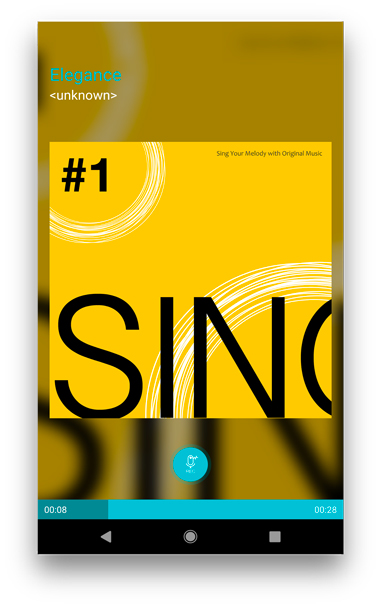 The app detects and deletes the vocals making the song ready for karaoking. The only thing missing is the lyrics which would help you guide through the song but you can edit and create the lyrics by copying it from google or any other lyrics website.

Now you can start recording your karaoke sessions and save it on your phone. You can do this by selecting your song and pressing the record button. After you’re done performing, you can save it on your Phone.

Best for recording karaoke in groups

Smule is probably the most popular karaoke app right now and evidently so. It has an intuitive UI inviting and addictive at times. Smule has many sound filters and effects which manipulate your voice and make you sound like a professional. Although your vocal abilities are limited to how good you can actually sing, unlike me who wails like a donkey, Smule did a pretty good job of covering that up with autotune filter. 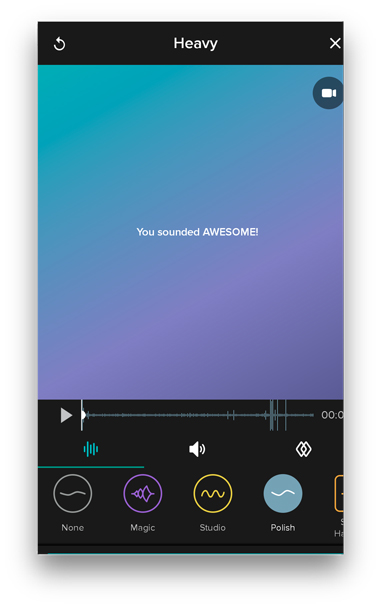 Smule has a couple of different options for creating your recorded performance. You can join someone else’s recording, Start a duet or a group and wait for others to join. But I prefer going solo. You can keep the video off or On and start jamming.

You can set the voice filter before the recording but not limited to just that, it can be edited after the session as well. Headphones are recommended to ensure better audio quality.

The lyrics start up in sync and you can follow the highlighted texts which keep you in sync. The best part of the layout is the pointer bar which lets you know the highs and lows of the song which give you an idea where you have to keep the pitch high. 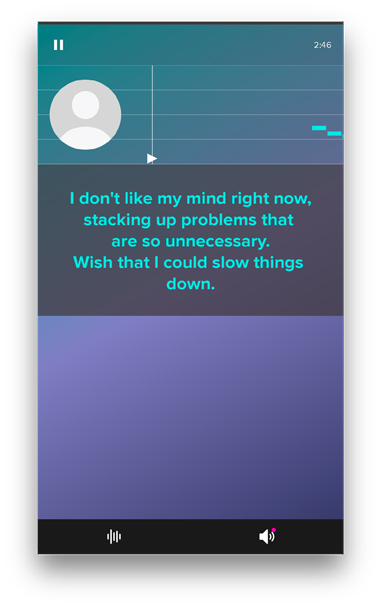 While you can change the filters and choose from, magic, studio, pop star, etc. There are however some paid effects which you can use by upgrading the app.

You can share your recordings with the public and browse other peoples sessions as well.

Best for getting lyrics on your existing music apps

MusicxMatch is a lyrics app that integrates with other music apps in your phone like YouTube, Spotify, etc to give you popup lyrics to popular songs. It has a smart way of identifying the songs being played in your apps and automatically finds the subtitles using an integrated Google search algorithm. You can use it as a karaoke app also but you would have taken additional steps to achieve that. You can record your karaoke sessions using the audio recorder on your phone. 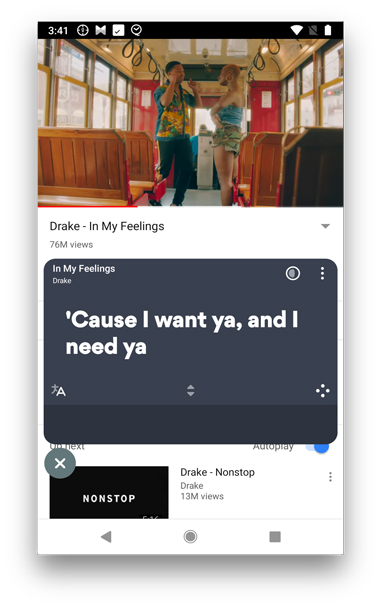 Read: How to play youtube music in the background

When you download the app, you get the option to set up the layout of the lyrics display. You can adjust the size, and color of the display box. The lyrics appear automatically and in sync with the majority of the songs you play on your phone. The app just needs one permission to access the notifications. This can be a deal breaker for some users because you are essentially giving access to every notification your phone gets. You can read their privacy policy before using this app.

MusicMatch takes advantage of Google Translate and allows lyrics in up to 60 languages but that depends on the song as well. However, you can not save the lyrics to your phone in the free version. You can upgrade to the paid version which will get you many features with it.

Karaoke is mostly for fun but some people really wish to learn to sing. SwiftScales is a virtual vocal trainer which lets you train your voice with the exercises developed by musicians.

SwiftScales has a set of routines and exercises which help you train your vocals and get better control over them. You begin by downloading the app from the app store and start the basic breathing exercises. Singing is all about range and control of your breath. This app lets you figure out your voice type first and gives specific exercises for your voice type. The training exercises range from beginner to advanced and also includes warm-up and warm-down exercises as well. 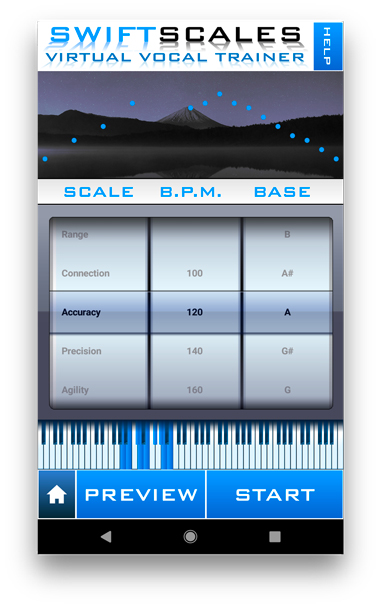 We tested a few apps and finalized this list. Smule is best for group singing. However, if you wish to work on your singing skills and train your vocals Swiftscales is the best option. MusicxMatch is great when you need lyrics to your favorite songs in your music apps. SingPlay Lets you generate your own custom Karaoke tunes. Tell us which app did you like the best?