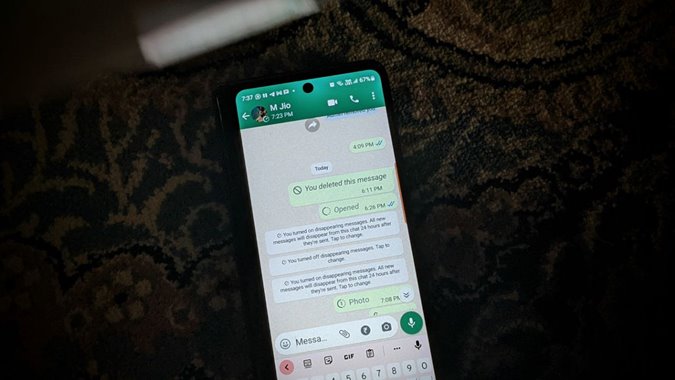 Not all WhatsApp messages are meant to be kept forever. Often, we want to send messages or photos that we want to vanish after some time without leaving any trace. Sure, you can hit the ‘Delete for everyone’ button but it’s too hectic because you have to do it manually for every single message. Thankfully, WhatsApp offers two native ways to send self-destructing messages. You can either use the Disappearing messages or the View once feature. Let’s check both methods.

To enable disappearing messages in a chat on Android and iPhone, follow these steps:

1. Open the WhatsApp chat where you want to enable the Disappearing messages feature.

2. Tap on the contact’s name at the top. You will reach the contact info screen. Scroll down and tap on Disappearing messages.

3. Then, choose the time after which the messages should disappear from the chat.

That’s it. Now, any sent or received message will be deleted after the set time.

Pro Tip: Repeat the same steps and select Off in step 3 to turn off Disappearing messages.

Few things to note about the Disappearing Messages feature in WhatsApp:

The above method is a bit aggressive as everything disappears in the chat. What if you only want a photo or video to disappear from a chat? Thankfully, WhatsApp offers another cool feature known as View once that works for photos and videos only.

As the name suggests, any photo or video sent using the View once feature will automatically disappear after the other person sees it. You cannot set a time period in this method. And, you will have to activate it every time you want to send self-destructing photo or video. Please keep in mind that other things will remain unaffected in the chat such as messages, stickers, GIFs, etc.

To send a self-destructing photo or video on WhatsApp on Android and iPhone, follow these steps:

1. Open the chat where you want to send a self-destructing photo or video.

2. On Android, tap on the Paperclip (attachment) icon and hit the Gallery option.

On iPhone, tap on the (+) add icon and select Photo & video library.

3. Select the photo or video to send.

4. You will reach the photo preview screen. Here tap on the (1) icon at the bottom to enable the View once mode. Hit the Send button to send the photo.

Once the receiver sees the photo, it will automatically disappear from the chat and they won’t be able to see it again.

Few things to keep in mind while using the View once feature:

1. What’s the difference between Disappearing messages and the View Once feature of WhatsApp?

2. How to unsend a WhatsApp message?

The Best of WhatsApp

WhatsApp offers many other hidden features similar to the ability to send disappearing messages. For instance, you can react to messages with emoji, export WhatsApp chats to PDF, and record WhatsApp calls.

How to Add or Remove a Group From...

How to Manage WhatsApp Community Admins on Desktop...

How to Start or Create WhatsApp Community on...