In this article, we have refocused into city building games only. Here, you can find Android gaming titles that offer an awesome simulation experience. If you are looking for casual gaming, with some strategy and even RPG elements, you should check this list out. Shall we start?

You need to put a pinch of strategic gameplay if you want to win these city-building games. However, most of these games have high-end graphics.

Megapolis is one of the best city building game not only because of the great graphics but also due to an all-new strategic gameplay. In Megapolis, you cannot simply create a random city. Instead, it must comply with the laws of market and economy. You can keep expanding your city and bring elements like railroads as well as airports. Of course, being the Mayor of Megapolis, you have to increase the city’s reputation as well. It’s also noted for regular updates. 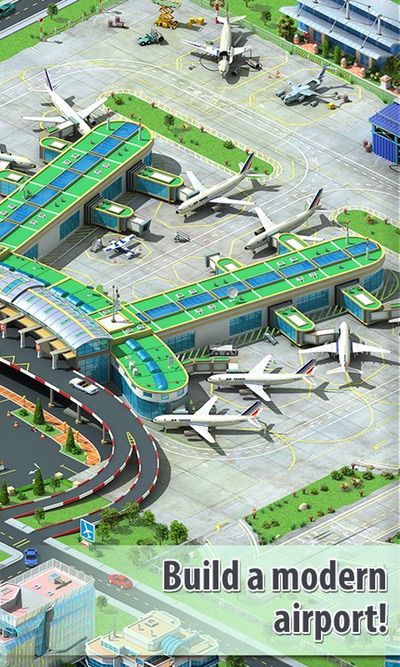 My Country wants to prepare your city for the future. In this game, you cannot succeed without a proper strategical approach. It’s also more interactive in that it lets you take actions towards natural disasters and other issues. Most importantly, 2020: My Country offers a deep city-building gameplay. We also loved the fact that it doesn’t require an internet connection to play. You can even be a part of traffic-control missions. 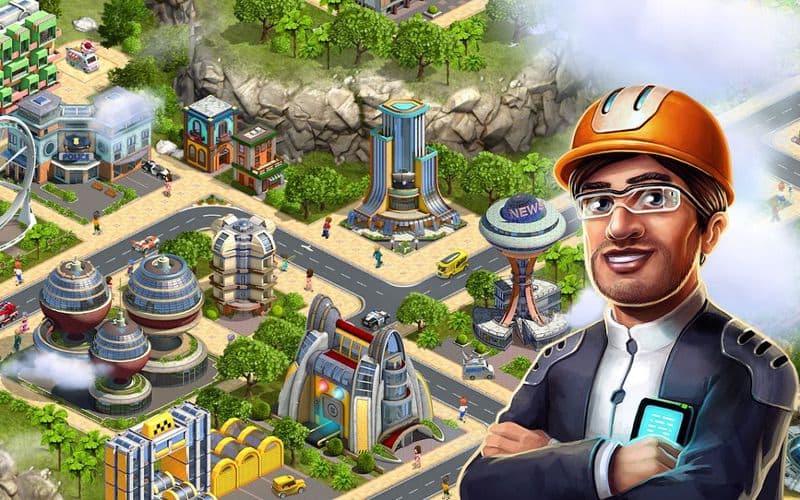 Pricing: 2020: My Country is free to play, offers In-App purchases

Fallout Shelter isn’t the typical city-building game for Android, for many reasons. First of all, you’re building a vault and not a proper city. However, you have to take care of the building and people, protect them from harm and increase the overall productivity. Fallout Shelter requires a minimum level of strategy gameplay while offering the best simulation experience ahead. In the course of time, you can accommodate a number of people from the doomsday world. 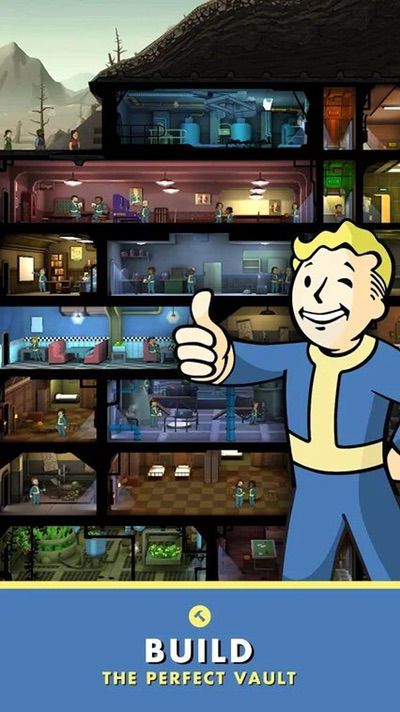 Pricing: Fallout Shelter is free to play, with In-App Purchases

As the name says, it’s a board game and city-building game at once. We understand that it’s something very strange to hear, but SUBURBIA City Building Game is fun. It’s going to be great if you already know the board game. However, even if you don’t, you can check out the resources from the game app itself. Despite being a board game, you have many decisions to take, from building places, maintaining population to adding a bit of strategy to everything. 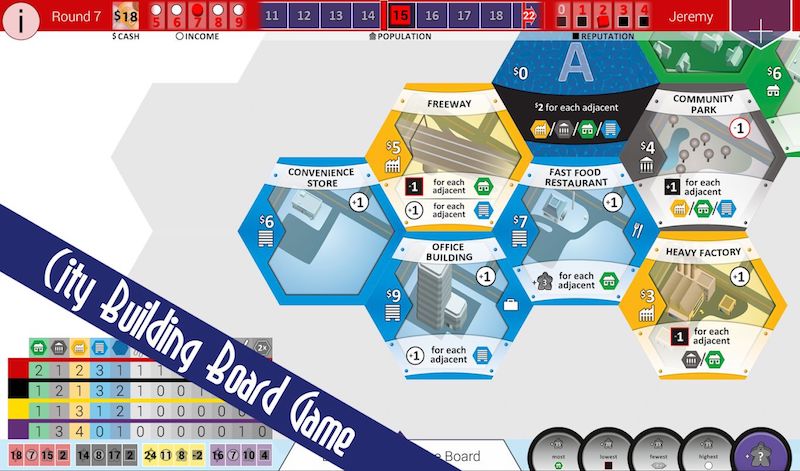 #5 The Battle of Polytopia

The Battle of Polytopia is another great strategy-based city building game. At the core, you have a turn-based strategy game. However, it lets you explore new worlds and set up awesome cities. Graphics and the superb storyline make The Battle of Polytopia one of the best titles you can find right now. If you are looking for a real time-killer that has amazing RPG elements and strategic gameplay, you should consider this one. Indeed, the graphics are killer. 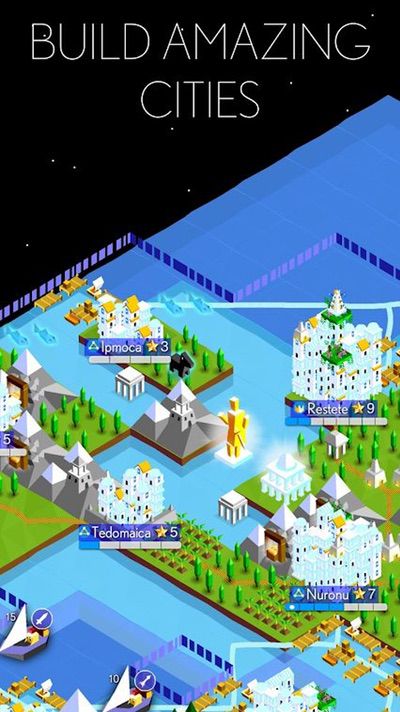 Pricing: The Battle of Polytopia is free to play, offers In-App Purchases

Check Out The Battle of Polytopia

You should consider these games if you are into the open-world simulation games. These titles let you build awesome cities with proper control.

SimCity BuildIt is yet another obvious choice when you need the best city building game experience. You have a lot of elements to include and the game offers a progressive path. SimCity BuildIt may be a bit heavy when compared to other games. To make that worth, the game lets you use your complete imagination as well as control while playing. You will also love its multi-player elements, thanks to the large user-base. While it is not primarily strategic gameplay, smart decisions can help. 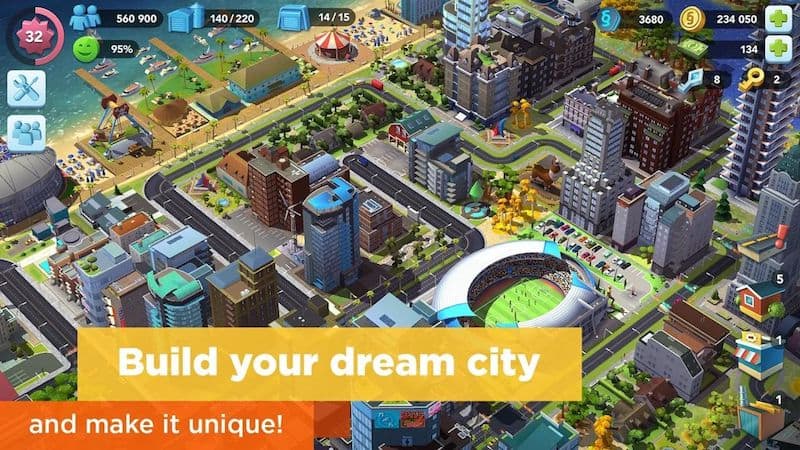 TheoTown is one of the few city building games that give you amazing control. You have to start a city from a large forest and set up the borders. You can categorize places into commercial and residential zones. One unique part here is that you can go deep into the building. For instance, you have to construct electric power supply and water supply. As you go further, TheoTown lets you unlock and build various elements into the game. It offers an innovative gameplay. 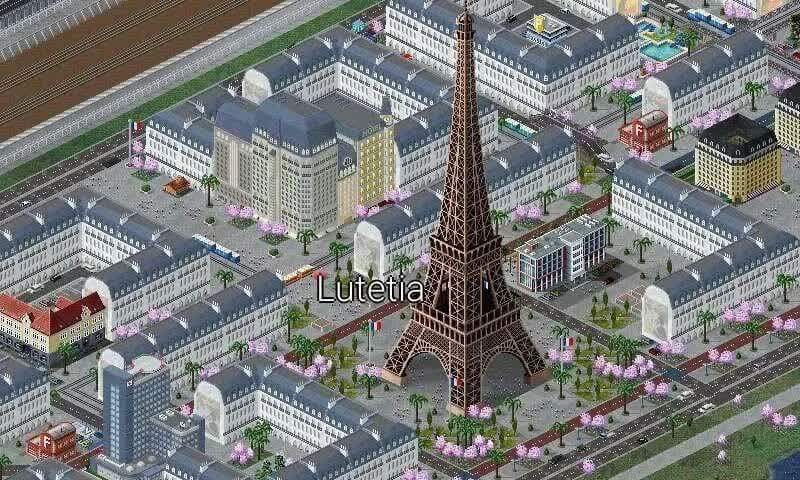 Township is an unparalleled choice when it comes to city building games. You are building your own, brand-new township. There are a lot of things to love about this game, and your control is something exceptional. You can keep improving your Township in the right place, bringing features like train stations, airports, and more crops. It also requires some strategy, since Township reputation is also a concern. What’s more, it has apps available for other platforms too. 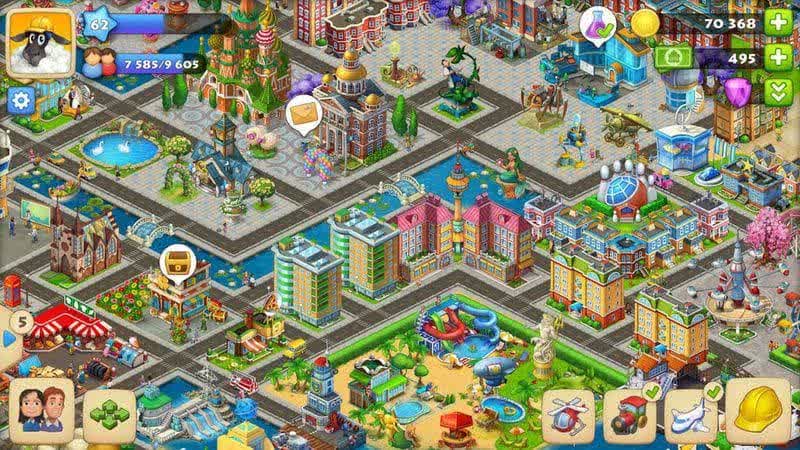 City Mania: Town Building Game from Gameloft is a must-check-out game when it comes to city building. It is set in the modern world where you have access to selfies and hover-boards. Also, as you move forward, City Mania: Town Building Game lets you unlock elements and customize areas like education, entertaining and commerce. It’s another building game with awesome control to the user. Unlike many of the other titles in the list, it gives importance to characters as well. 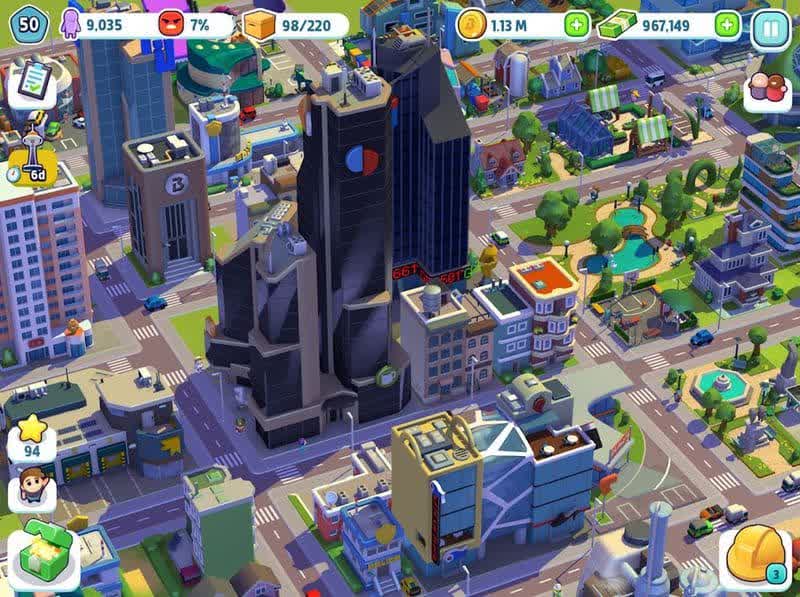 All the above-mentioned city building games are complex in size, but Bit City is not. If you are looking for an ultra-minimal city building game, you should consider this title. Although it doesn’t let you bring thousands of elements, you will enjoy the management part. Once you’ve built the basics, Bit City lets you do tasks like tax collection, building upgrades, and even city upgrades. The 3D Graphics aren’t that realistic but the game offers what the gameplay deserves. 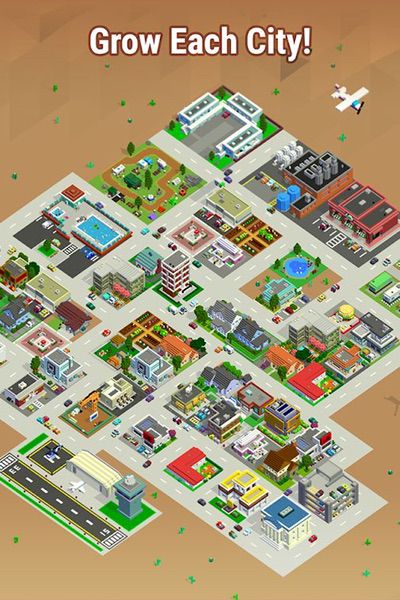 Most of these games are based on certain themes or have RPG elements. You have the best of both worlds — of RPG and simulation.

If you like pixel-graphics games, you will love the city-building game inside Dungeon Village. The title is RPG in primary nature, but you have to improve the hamlet. The best part is that you are going to build specialized components and not common buildings. You can bring some schools, magic labs etc. Altogether, Dungeon Village manages to provide an overall impressive gameplay for all. Of course, to win this arcade simulation, you need some strategy. 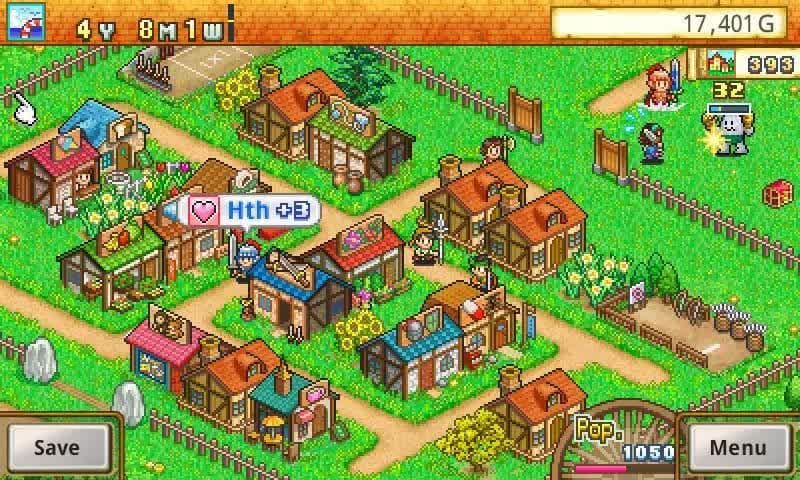 Pricing: Dungeon Village is priced at $4.99

#12 The Simpsons: Tapped Out

If you’d like to play a city building game that’s set in the world of The Simpsons, you should check this game out. It lets you create your own Springfield, where you can include more buildings and get money. You can also engage in a game that is filled with The Simpsons characters. The result? It’s all fun. Despite being inside a theme, The Simpsons: Tapped Out lets you customize your city and include some strategies. Even if you’re not a fan of The Simpsons, give it a try. 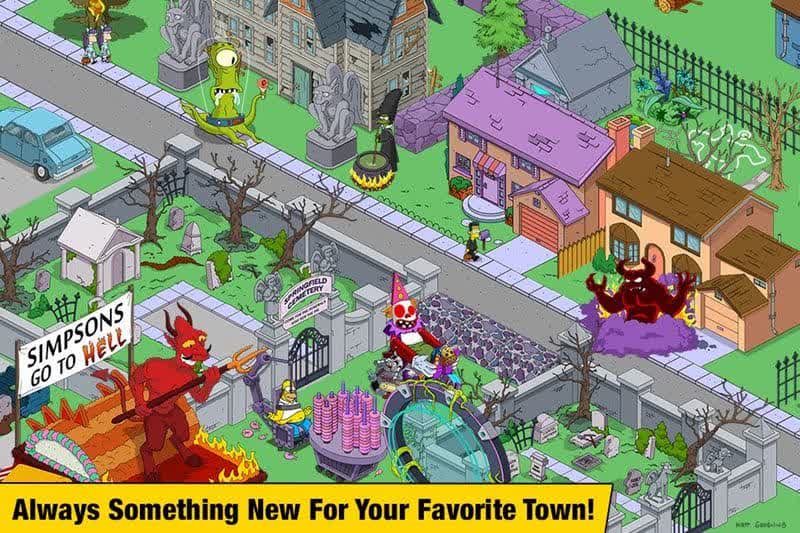 Pricing: The Simpsons: Tapped Out is free to play, in-app purchases available

Check Out The Simpsons: Tapped Out

Inside Pocket Build, you are building a city, but a fantasy-based one. You won’t find those techy factories or modernized railroads. Instead, you can go back a bit in time and bring some retro elements. Pocket Build has options to include castles, trees, bridges, barrels, towers, pathways and rocks. In addition to these, there are hundreds of unlockable elements as well. Compared to normal city building games, Pocket Build has an open world environment as well. 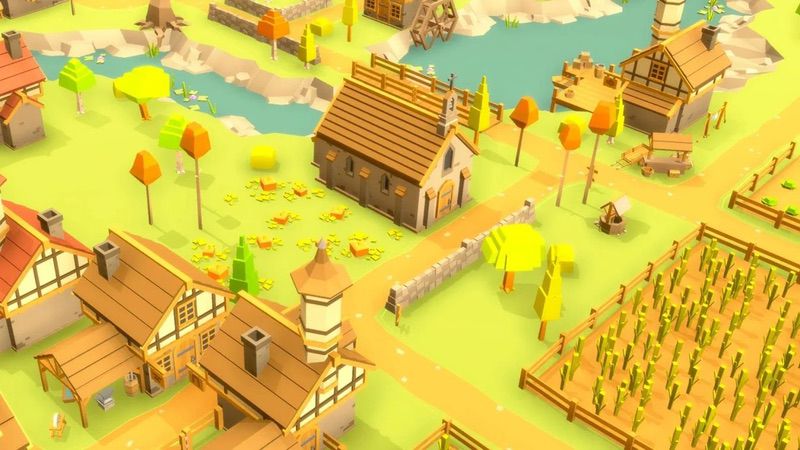 Pricing: Pocket Build is priced at $2.49

Townsmen offer a city-building gameplay that is set in the medieval period. When you start, all you have is one backwater and you have to make it an awesome city. Automation isn’t a thing about this game, because you need to take care of the economic and production chains. There are unlockable elements, quests, and some digital challenges to check out. The gameplay also brings natural disasters and random events. So, you may need some strategy as well. 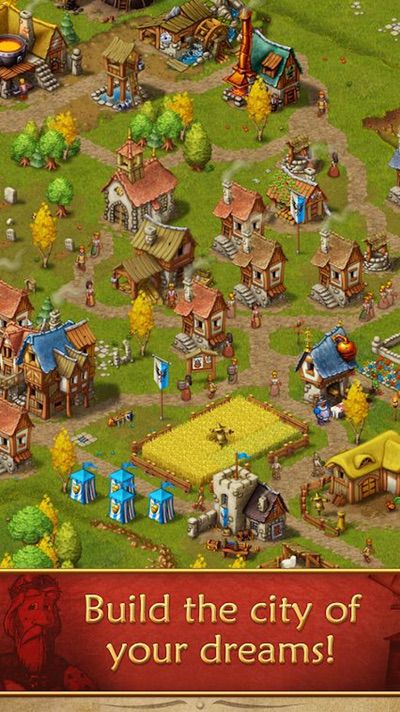 Pricing: Townsmen is free to play, and it offers In-App purchases

As the name says, Virtual City Playground: Building Tycoon is about creating and perfecting buildings. At the end of the day, you will be building an industrial place that is big enough. At the same time, you have to take care of things like recycling, environment, and security. Compared to other games, Virtual City Playground: Building Tycoon goes a step forward by offering rewards and public events. Last but not the least, you would love the graphics quality of this title. 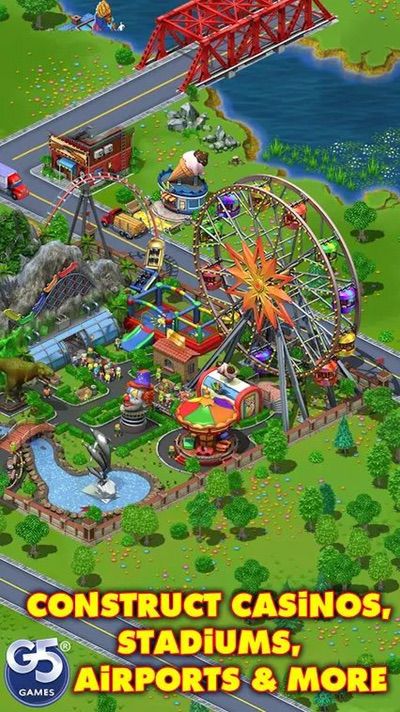 That’s our list of the best 15 city-building games you can find for Android. Although there are only three big categories, diversity is assured. For instance, for simulation game enthusiasts, Township is great. Or, if you’re into some strategy games too, try 2020: My Country or Fallout Shelter. We hope you have fun!