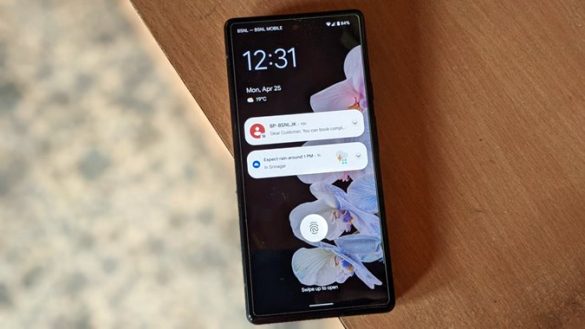 When using your fingerprint to unlock your Pixel 6, do not simply touch the screen with your finger. It will not recognize the fingerprint. To unlock properly, press your finger firmly on the sensor and hold it there for a second or two.

Tip: Check out the best always-on display apps for Android.

This might sound like a weird fix but Google has mentioned it on its official support page. Google suggests moisturizing your hands, especially the fingers. This makes sense because if your fingers are dry or cracked, they might not be detected properly by the optical in-display fingerprint reader, which is basically a camera that lights up the small portion of the screen to match the fingerprint with the existing copy on your phone.

Pro Tip: A Reddit user suggests creating different fingerprint profiles for the same finger in different weather conditions i.e., normal room temperature, damp after washing hands, and dry from being out in the cold.

If, however, you don’t want to remove the screen protector, try the next fix first.

There’s no harm in trying though. Go to Settings > Display. Enable the toggle to Increase touch sensitivity.

Earlier, Pixel 6 fingerprint scanner issues were happening to due a bug in the operating system. Fortunately, those were fixed by the updates sent by Google.

If you continue to experience issues with the fingerprint reader, you should check for an available OS update on your Pixel 6 and update to the latest version of Android. Maybe you didn’t update earlier or a new update could bring more improvements to the fingerprint sensor.

If Pixel 6 isn’t detecting your fingerprint, you should try redoing the fingerprint setup process. However, make sure to hold your phone in the same way as you would hold it naturally while unlocking it.

1. Open Settings on your Pixel phone.

3. Enter your backup PIN or pattern.

4. You will be greeted by the registered fingerprints. Tap on the Delete icon next to all the available fingerprints. A confirmation pop-up will show up. Tap on Yes, remove.

Tip: Tap on the fingerprint name to rename it to something else.

5. With the existing fingerprints deleted, tap on the Add fingerprint option. Or, go back to Settings > Security > Fingerprint unlock to add a fingerprint.

6. Follow the on-screen instructions to set up the fingerprint. You will have to touch and hold the sensor and lift your finger multiple times in order to register the fingerprint properly.

Here are a few tips that will make a huge difference in improving the fingerprint sensor on your Pixel 6.

Pixel 6’s comes with an under-display fingerprint sensor that uses an optical sensor, which is basically a camera that looks at your finger. Therefore, in different lighting conditions, it can sometimes fail to detect the fingerprint.

If a single fingerprint doesn’t work, try adding more copies of the same finger. However, try to add them under different lighting conditions such as dark, full bright, and indoors in regular lighting.

Be Careful With Fingerprints

I hope the above solutions helped you in fixing the Pixel 6 fingerprint sensor not working issue. Do remember that a fingerprint can be less secure than other methods such as a PIN, pattern, or password because a copy of your fingerprint can be used to unlock the phone and you only have 10! But if you enjoy using fingerprints, learn how to use fingerprint lock for WhatsApp.