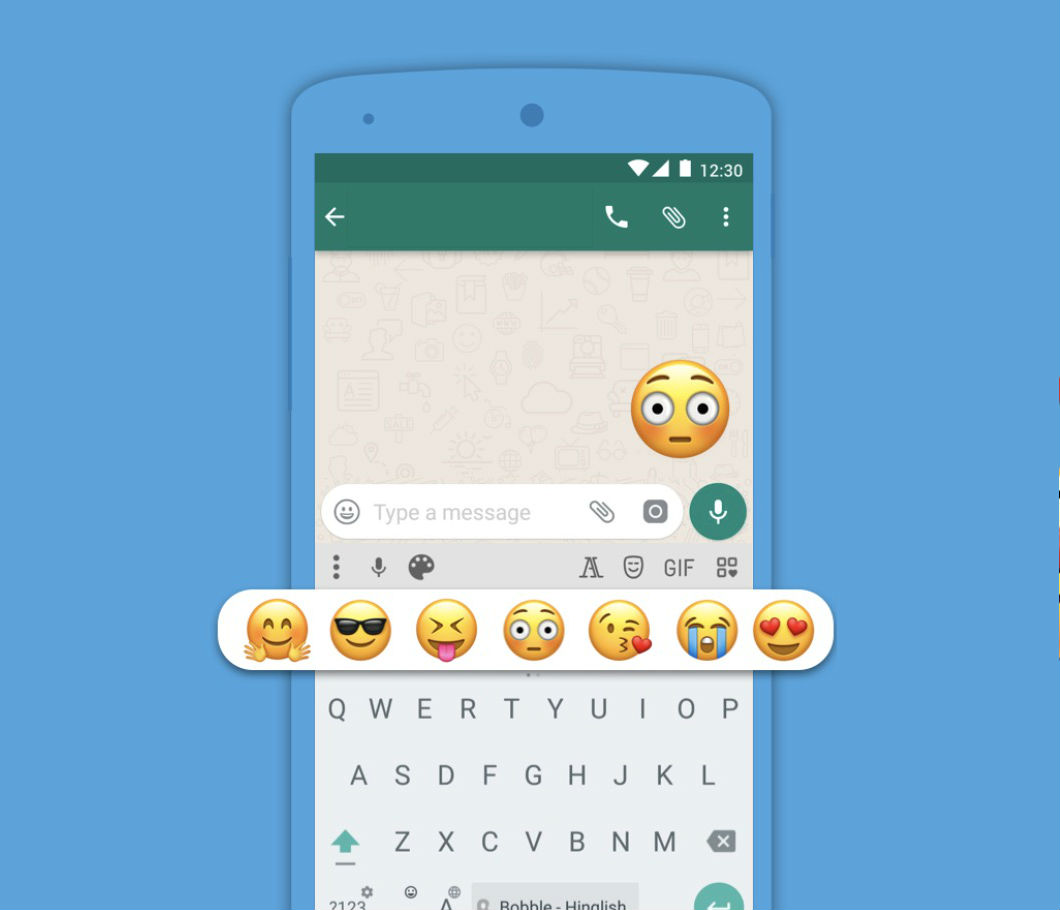 I grew up sending text-based emojis like : P and : D on classic Nokia 3310. But since then, smartphones have come a long way and so have emojis and GIFs. They are more descriptive, come in all sorts of shapes and sizes, and they like to wave at you toothily. With that thought in mind, let’s take a look at some of the best GIF keyboard apps for texting on Android.

Read: Share Your Computer’s Mouse (and Keyboard) With Your Android

While there are many GIFs, emojis, and stickers keyboard app available in the Play Store, a dedicated app for GIFs can be overkill for some people. If you are looking to use more than one keyboard, like many others, you must install Quick Keyboard Switch that will help you quickly switch between regular typing keyboard and GIF keyboards. The default way to do the same is tricky and requires more effort than necessary.

Gboard (short for Google Keyboard) comes pre-installed on most stock Android smartphones. Like most keyboard there it also comes with some smileys and GIFs by default, but there is also an option to search for new GIFs using the built-in search function. I guess there are no surprises here because search is Google’s middle name. 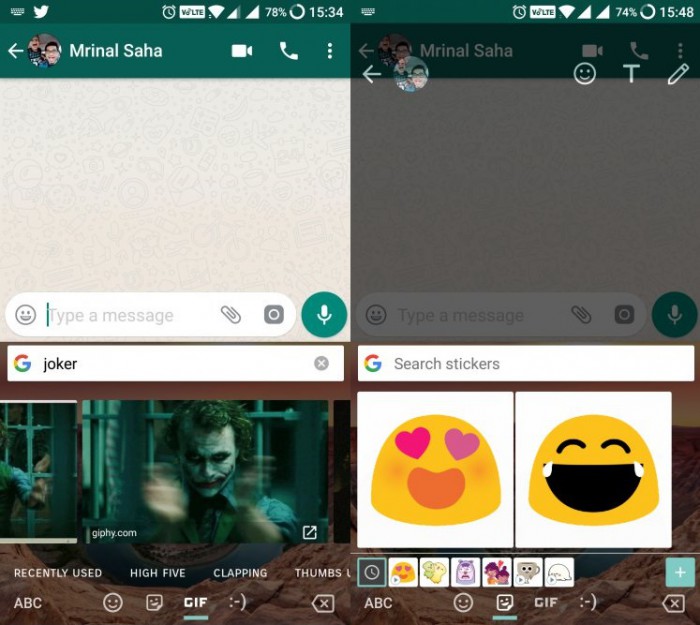 Where Gboard does shine is all other Google services that it integrates into like maps, search, translate, and voice commands. Makes life that much easier.

Verdict: The GIF search will get you more GIFs than you know where and how to use, plus additional Google functionalities like search, translate, and maps will make your life that much easier.

Facemoji Emoji is one of the new entrants in the GIF and emoji keyboard scene but has quickly climbed up the ranks. With more than 3500 emoticons, GIFs, stickers, and symbols to choose from, Facemoji has enough to satisfy your thirst for communicating in GIFs.

When loading GIFs previews, I noticed it was faster than Gboard. Facemoji will also suggest you emoticons as you type words like clap, smile, birthday or eat. So you know there is the perfect emoji for feelings you are trying to express. 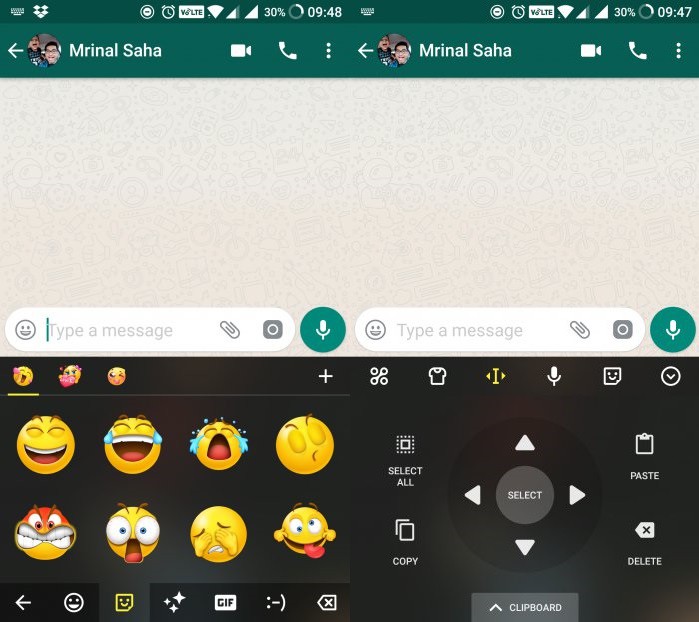 The library is extensive and fun to use. There is a search function to find more GIFs on the web. It will kind of make you use it even if you were not thinking of, which makes it a little addicting. It comes with language translation which works, I believe, using the Google Translate API.

Other features include a clipboard, voice support, and smart replies. You can turn your face into an emoji, animoji. On the other hand, predictive text is not up to the mark and there are better options.

Tenor is not exactly a keyboard app like the rest, but it is more like a search engine for GIFs which you can then share on any platform or messenger. The library is huge and loads pretty fast. Just input the keyword and Tenor will come back with suggestions that you can share, post or embed anywhere. 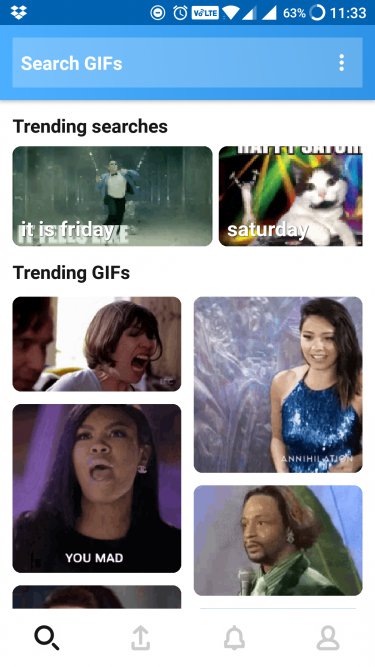 It also supports videos, which I haven’t seen on any other GIF keyboard yet. This way, Tenor is basically competing with Giphy, another search engine built for search GIFs, but Tenor is super fast and really fun. Once you send the GIF, your default keyboard app will kick in because Tenor doesn’t actually have an alpha-numeric keyboard. It was built just GIFs.

Tenor is a supplementary app built to complement your existing keyboard app. You can create an account and share your GIFs online. The community is large and active. You can view trending and famous GIFs on the fly.

Verdict: Tenor is a great app to search and send GIF images. It is probably the fastest GIF app too and the collection is awesome. The only thing it lacks is a proper alpha-numeric keyboard but that was never its main point of attraction.

Kika is a very popular emoticon and GIF app for texting app with more than 2 million reviews on the Play Store. You can choose between over 3000 GIFs, emoticons, and stickers. The collection is robust and the designs are cool.

There is a built-in search engine which is faster than Gboard but not as fast as Tenor. There is a prediction engine that will predict emojis as your key in words. 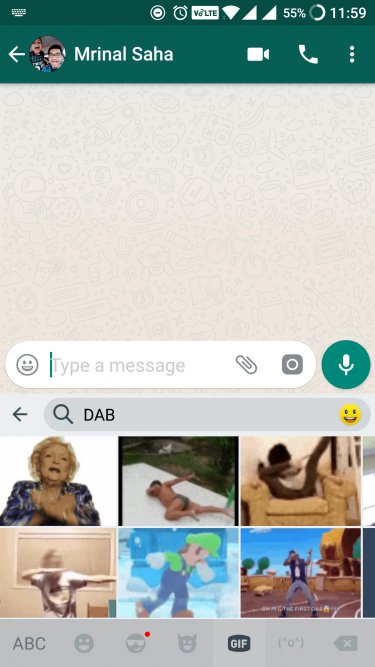 What makes Kika so amazing is its dictionary, 300+ themes, and 50+ emoticon based games that you can play during your free time. Kika Keyboard is all about customizations. You can even choose your font and keypress sounds. The layout can be QWERTY or AZERTY. Supports voice typing.

Verdict: Kika is an amazing and one of the best GIF keyboard apps that is known for customizable options and vast GIF and emoticon library.

Apart from all the usual features like emojis, GIFs, themes, fonts, stickers, and emoticons, Bobble allows you to create an avatar, and use it to create a number of GIFs.

Bobble uses advance face recognition technology to create an animated version of you that you can use to create a number of different GIFs and stickers. 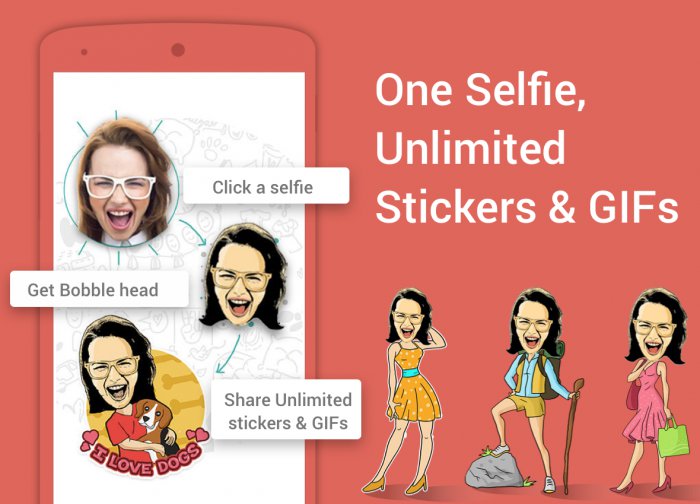 Although the GIF search is missing, it does supports voice-to-text, fonts, and themes to choose from. Creating a new bobble is easy and fun. Within few clicks, you will have your new avatar created that you can use everywhere.

Verdict: Bobble is a cool little app to create your personal GIFs and animations that will instantly make your friends ask you, which app is that. Plus, it does pretty much everything other apps do except GIF search. It’s limited in that department.

GIF keyboards come in all shapes and colors with each one offering something different. You can search the web, create your own avatars based GIF, use a feature-rich keyboard or be part of a social GIF based community, it all depends on your taste. Or, you can just install a bunch of them and use all in tandem.