What’s the Difference Between Galaxy Store and Play Store 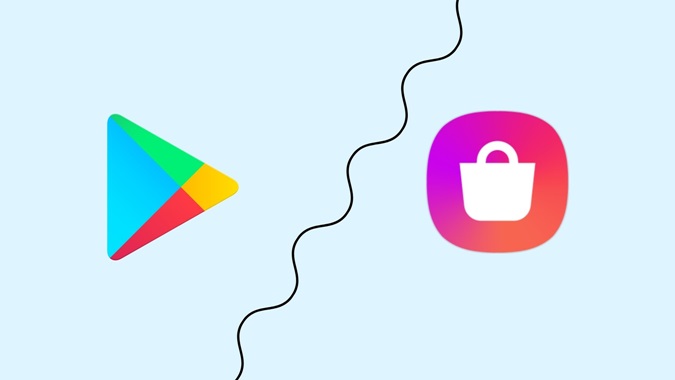 Let’s start with the obvious. Play Store is owned by Google whereas Samsung owns Galaxy Store. That means Play Store is available on almost every Android phone. However, that’s not the case with Galaxy Store, which is limited to Samsung Galaxy phones only.

You will be using a Google account with Play Store and a Samsung account with Galaxy Store. There are high chances that you already have a Google account that is added to your phone. Play Store will use the same account. On the contrary, if you are new to Samsung, you will have to create a Samsung account that will be used for Samsung Cloud and Galaxy Store.

The basic user interface (UI) of both apps is the same. You will find the apps and games grouped into various categories such as top, free, etc. Tapping on an app will open its detailed view from where you can install it. If you want to install apps quickly, Samsung offers an Install button under all apps. In the Play Store, you will have to long touch the app first and then hit the Install button. At the bottom, you will find various tabs, and at the top, you have the search bar.

Both have the same functionality of providing you with Android apps. Google Play Store is the official app store for Android that you will find on almost all Android phones including Samsung. On the other hand, Galaxy Store is limited to Samsung Galaxy phones and tablets. You cannot use it on other devices. While Play Store has more apps as compared to Galaxy Store, at times, some apps are made exclusive to Galaxy Store such as Fortnite.

When it comes to installing apps, you can install an app from either store. In most cases, you will need to use the same store to update the app as well. However, that’s not a mandatory requirement. Some apps can be updated from both stores. However, apps installed from the Play Store cannot be auto-updated from Galaxy Store. You will have to manually update them.

After installation, the apps work in the same manner irrespective of the fact where you installed them from. Let’s say you install WhatsApp from the Galaxy Store instead of the Play Store. That doesn’t mean you will have extra features as compared to the Play Store version.

Regarding features, you get similar things. For instance, you can add items to your wish list, auto-update apps, use gift cards, and more. While you can install games from both of them, Play Store lets you install books and movies too.

Which App Store to Use

Now, we come to the main question, ‘Which one to use – Galaxy Store or Play Store?’ The answer is both if you are a Samsung user. Both have a purpose on the Samsung Galaxy phone.

We would suggest using Play Store to install new apps. That’s because if you switch to a different Android phone other than Samsung in the future, it will be easy to reinstall the existing apps, which won’t be possible if you use Galaxy Store.

Similarly, you need the Galaxy Store to update native Samsung apps. If you don’t use Galaxy Store, those apps won’t be updated. So use it only to update apps and to install any exclusive app.

Why Are There Two App Stores on Samsung Galaxy Phones

Google Play Store is the universal app store that comes pre-installed on all Android phones. However, since Samsung runs its own customized version of Android i.e., OneUI, it needs certain apps that are exclusive to Samsung devices. Such apps are available in Galaxy Store only. Moreover, Galaxy Store also lists apps for other Samsung devices such as Samsung Watch. So instead of looking for Samsung-specific apps on Play Store, Samsung offers a dedicated store where you can easily find such apps.

Is Galaxy Store the Same as Play Store

Both have the same job of providing apps for your phone. However, they differ in a number of ways as described above.

Can I Delete Galaxy Store

No. You cannot uninstall or disable Galaxy Store on your Samsung Galaxy phone. However, Play Store can be disabled. But we wouldn’t suggest doing it.

Yes, just like Play Store, Galaxy Store is safe to download and install apps. However, Play Store offers an extra layer of protection in the form of the Play Protect feature that helps in detecting harmful apps on your phone.

Even though it may look like that Galaxy Store doesn’t offer that much as compared to Play Store, in reality, Google actually tried to kill Galaxy Store. However, that shouldn’t stop you from using Samsung Galaxy phones. They offer amazing features when it comes to notifications, gallery, and screenshots.