What Happens When You Block a Number on Android and iPhone 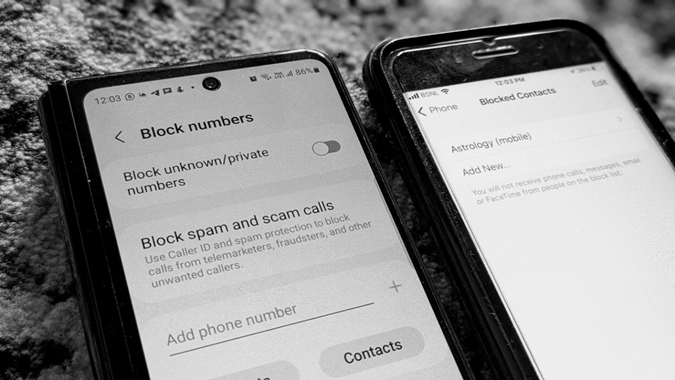 Not all calls are meant to be entertained. I can imagine the negative thoughts that you might have when you receive a call from a person who annoys you. Thankfully, you can block numbers on both Android and iPhone. But what happens by blocking a number and will the other person know? Find the answer here. Let’s get started.

What Happens to Calls When You Block Someone

On some networks, the calls are sent to Voicemail but don’t worry, you won’t receive voicemail notifications either. So it’s equivalent to not receiving calls at all. In a nutshell, blocking a number prevents them from calling you.

However, blocking contact is only effective in one direction. That is, you can still communicate with the blocked person from your end, which means you can call them even if you have blocked them.

Tip: Check out 10+ ways to fix iPhone not receiving calls but can make them.

What Happens to Messages After Blocking a Number

The next major impact of blocking a number is on SMS messages. When you block a number on Android or iPhone, that number cannot send you a regular text message (SMS or MMS). Even though the message will be sent from the sender’s side but you won’t receive the message.

Messages, like calls, have a one-way impact. You can message the blocked person, but you will not receive a response from the blocked contact.

What Other Apps Are Affected

Blocking a number via the Phone app, Contacts, or Settings will only affect regular calls and messages on Android. The blocked number can still contact you on other apps like WhatsApp, Facebook Messenger, Snapchat, Instagram, etc. You need to block the person separately on these apps.

On iOS, however, things are slightly different as it affects FaceTime and iMessage as well. That is, the blocked number cannot FaceTime or iMessage you on your iPhone. Furthermore, you will not receive emails from the blocked contact on the Apple Email app, if an e-mail ID is associated with the blocked contact.

Apart from FaceTime, iMessage, and Email, no other app is affected on iOS as well. You will still receive messages and calls on other apps like WhatsApp, Instagram, etc., from the blocked person.

Tip: Learn how to use FaceTime links to call people.

What Happens When the Blocked Person Calls You

When a blocked contact tries to call you, they will hear different things based on your carrier. For instance, some might be greeted by pre-recorded messages like the number is busy, the number is not reachable, the number cannot take calls, etc., Others will hear one ring before the call disconnects automatically.

Does the Other Person Know That You Blocked Them

Not really. Firstly, because they will hear pre-recorded messages when they call you, and their messages are also shown as sent. Secondly, the contact will not be notified or sent a message that you have blocked them. However, after a few attempts, they may be able to guess that something is fishy.

Does Blocking a Number Delete It From Your Contacts

No. Blocking a number will not delete it from your contacts. If you decide to unblock the number in the future, it will still be available in your contacts.

What Happens After Unblocking a Number

After you unblock a number, the contact will regain the normal capabilities of being able to call and message you. However, you won’t receive the messages that were sent when the number was blocked. Similarly, you cannot see call history details for the blocked number after unblocking it.

How to Block a Number on Android Phone

1. Open the Phone app on your Android phone.

3. Tap on the three-dot icon and press the Block numbers option.

How to Unblock a Number on Android Phone

2. Tap on the three-dot icon and select Settings.

3. Tap on Block numbers. Here you will see the list of blocked numbers. Tap on the X or – icon next to the contact that you want to unblock.

Tip: Check out other ways to unblock a number on an Android phone.

How to Block a Number on iPhone

1. Launch the Phone app on your iPhone.

2. Open the contact that you want to block. Scroll down on the contact info screen and tap on Block this caller.

How to Unblock a Number on iPhone

1. Open the Settings app on your iPhone.

3. You will see all the blocked numbers. Tap on Edit at the top and hit the (-) Remove icon next to the number that you want to unblock.

I hope all your queries were found answered regarding what happens when you block a number on Android or iPhone. If you don’t want to take the harsh step of blocking someone, you can mute a number on iPhone and Android. And if you want to block spam calls only, you can do it with the help of the Silence unknown callers feature on the iPhone.