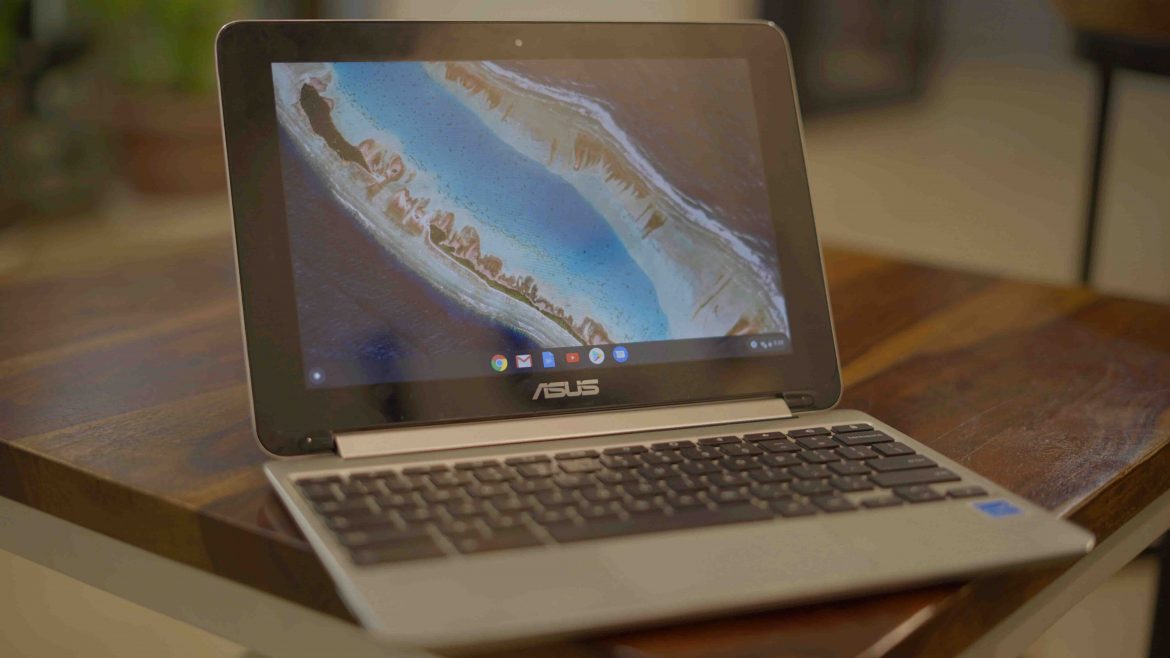 Though Chrome OS supports Android apps, web apps, Linux apps, etc each and every app is not completely optimized to work on the Chromebooks. But day-by-day, the number of apps that are getting optimized is growing significantly including the apps that help you to draw or paint. Recently I have tested out 20+ drawing apps, and here are the best once among them to use on a Chromebook.

Before going to install, let’s take a look at the in-build drawing app.

This is a built-in app that is already available on your Chromebook. As a matter of surprise, it is also feature-rich and gets the work done for most of you. It supports most used brushes like pen, pencil, marker, etc, colors, size, opacity, and also lite enough to work smoothly. Anyhow, it’s not a professional tool and misses out on features like color modes, many brush types, and shapes, curves, presets, etc. 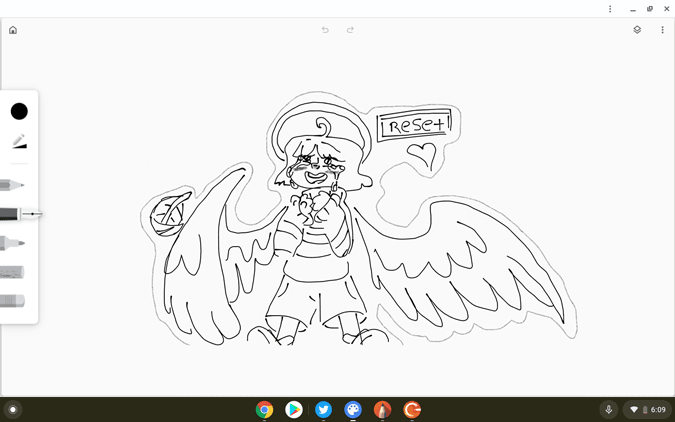 Gravit Designer is a popular professional tool for drawing and painting. Along with a various number of brush types and features like snapping, creating paths with the pen, layers, using knife tool to cut or even making shapes and symbols from the huge library of presets. You also have an edit section on the right where you can customize each and every line you draw and tool you use for changing things like opacity, angles, blending mode, style, blur, shadowing, and even position adjustments, etc. Moreover, it is a PWA and works just great on Chrome OS.

But to get features like offline mode, accessing the system fonts, import/export features, unlimited Cloud Storage, etc you need to get a PRO mode which costs $49/year. 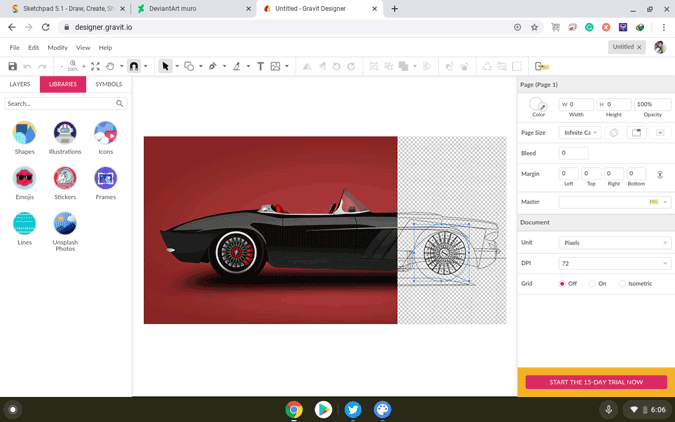 Krita is an opensource app that is available on Linux, Windows, and Mac. Now it is also available on the Google Play Store for Chromebooks. It has all the pro features you expect from a pro painting app ranging from Layers, Brushes to presets, filters, channels, etc. As it is an open-source project, it is also free to use. The only caveat being, the app doesn’t have a clean user interface. Comparing to other versions like Windows, Krita on Chromebooks is still junky. None the less, it is just a recently introduced app and still on the beta stage, so you can expect the problems to be cleared in the future.

Sketchpad is also a PWA app like Gravit Designer, but it offers only the features that are most important. Hence making the app bit more clutter-free and easy to start. You can find various brushes, color modes, presets, etc as they are obviously what makes the great drawing app, but misses features shadowing, pen tool to select, creating paths, presets for shapes, etc. If you are looking for a pro drawing app that doesn’t feel like taking a course, Sketchpad is for you. 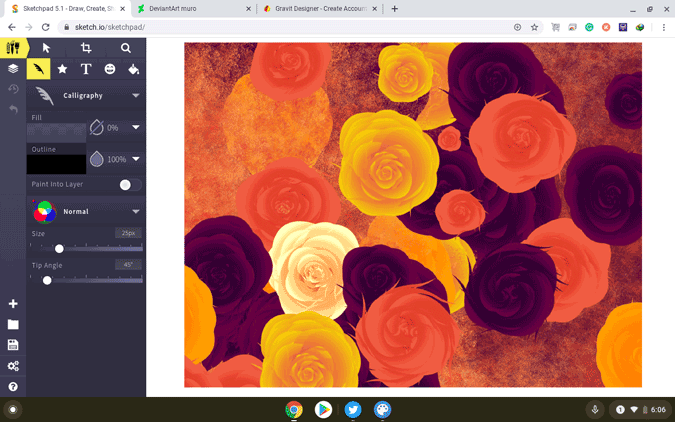 Concepts might be just another app that helps to draw on your Chromebook, but it is a lot more specific about one thing and that is drawing concepts, models, house plans, etc. It is minimal and modern looking with its material design. But the caveat is, even the most basic features like adjustments, importing images, etc are in the Pro version. But you can unlock them for a one-time payment of $9.99 which gives you a few more essential things. But if you are willing to get the complete pro version with features including more brush types, presets, exclusive future updates, customer support, community, etc, it costs $4.99/month. 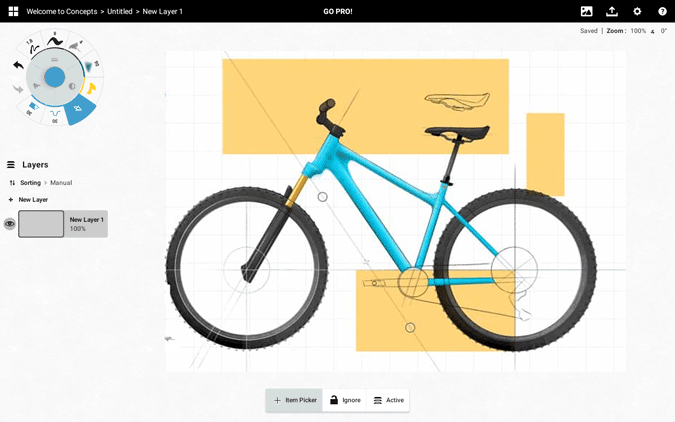 Artflow can be said as a distraction less pro drawing app in a single sentence. It uses the entire screen including the Chrome dock to give a large area to work on the canvas. All the controls are hidden inside the dot with is located in the top right corner. You can click on the dot and access all the features, and the controls will be hidden automatically once you started drawing something.

Coming thee features part, it just contains basic features like brushes, color pickers, shapes, opaque, etc, and you there are bells and whistles to find here. If you are looking for a clean drawing app that can provide you much larger canvas, Artflow makes total sense to you. 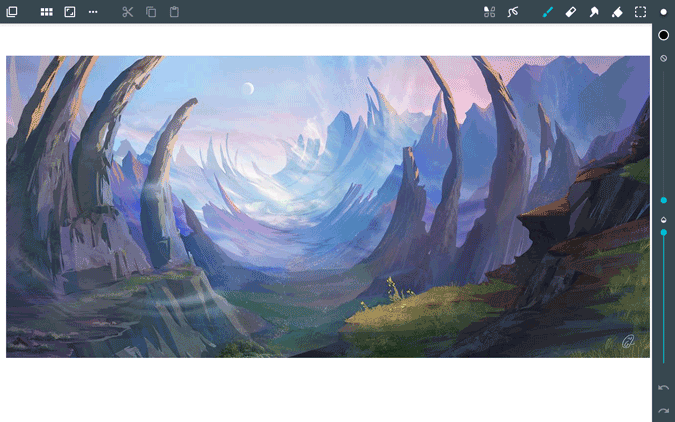 Flipaclip is not just a drawing app, it can be used to make a tool to make animations. As the name says, it is something like Flip Book but on phones, tablets, and Chromebooks. This is how it works, you get all the basic drawing tools like brushes to draw and when you add a second page you can slightly see what you have drawn on the first page, so you can take it as a reference to draw the next page. You also get a few tools like scale and shapes that help you draw perfect shapes over and over again. 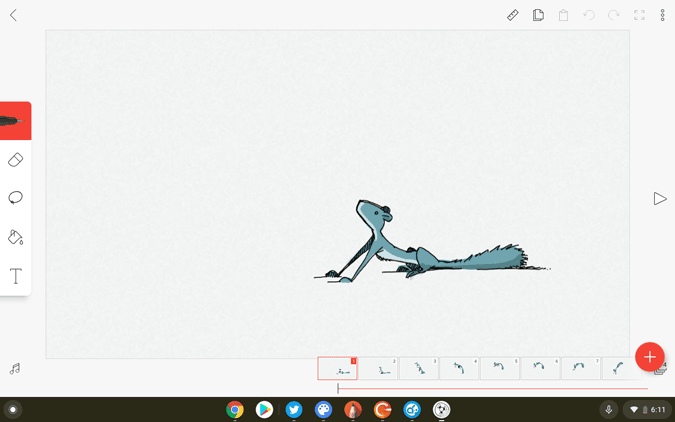 Deviant Art is a community where posts photos and effects that helps people to use in their photoshop workflows for free. This website also has an in-build editor to design an effect that can be helpful to add in photoshop. This is also a web app but is feature-rich and infact hard to understand the tools in a get-go. That is due to the clumsy user interface and ton of tools which almost does same things with few differences. Non the less, once you are used to it, it gets the work done. If your main focus is to create effects to add to your photos, then you can use Deviant Art to find a lot of effects for free, and you can also create effects with the Muro. 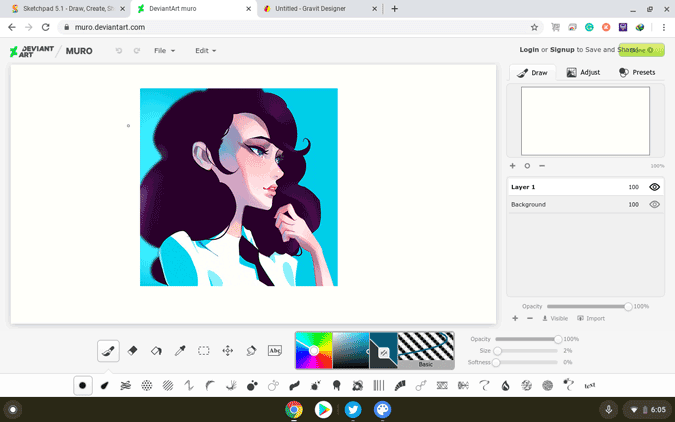 That leaves us to the most popular drawing apps on the Play Store from well-known companies like Autodesk and Adobe. Illustrator draw is a minimal drawing tool with few brushes and few options like layers and undo. Whereas Photoshop Sketch is more of a sketching and shading platform rather than drawing. And Sketchbook my Autodesk is a kind of combination of both Photoshop and illustrator.

All three are minimal apps that you cannot go wrong for small uses, but surprisingly if you are looking for Pro drawing apps, Gravit Designer, Krita and Skectpad do a bit better job on Chromebooks. 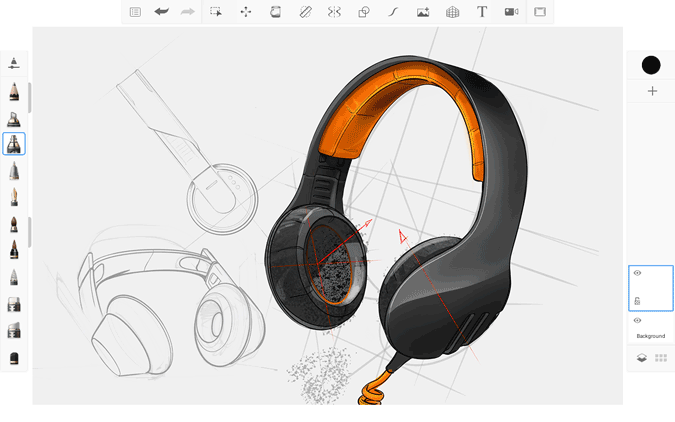 As all Chromebooks have touch screens, these drawing apps work on almost any Chromebook you are on and you can also get a comparable stylus to make your experience even better. So which you are going to choose? and let me know in the comment section if I missed something.