Best Local Co-Op PS4 Games to Play With Your Mates 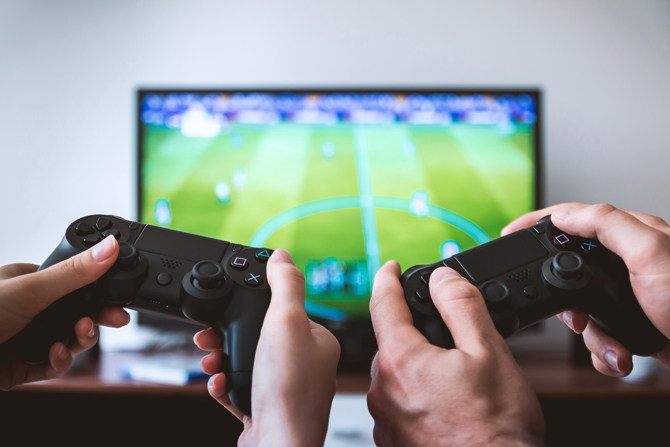 Most of us are lone gamers and that’s why single Player games have had a resurgence in the recent years with the new God of War,  Spider-Man, and Red Dead Redemption 2. There are some games that are just meant to be played in Co-op mode with friends. Something about having a real buddy to fight alongside you in the same battle makes the game more immersive and visceral like ping-pong doubles. The Following games are a list of couch co-op games that use either a split screen or shared screen for players to work as teammates. It’s a bond that only real gamers will understand. Let’s Begin.

Must Read: How to Turn TV on with PS4

Specifically designed to play in co-op, you must play your way out with another person. You need to co-operate with each other to progress as not doing so can lead to one player reaching a cutscene and the other still in gameplay. It’s underrated as most people were thrown off by the director’s choice of words. It combines different elements of gameplay from driving cars to playing connect 4. If you and your mate need a way out of chores this is probably it.

The Stand-alone expansion to the game, ‘Don’t Starve’, which is a survival game with night falls and you need to survive as long as you can. You can choose to play online or co-op with a buddy to explore new biomes and fight strange creatures. It’s really fun because the main threat is planning ahead and surviving the night. It gets a bit challenging but with a buddy, any game is better, well not any game. (looking at you Fallout 76)

Ground zero of roguelikes in my books. Each level is randomly generated and filled with loot and secrets. You can play either in a shared screen or split screen. Fast-paced action and RPG mechanics make it really fun to test how good you can get in combat and exploration. Music is exceptionally done as it gives you a sense of forwarding momentum. You and your mate will definitely be traumatized but it’s part of the experience.

Shooting and looting are at the core of this FPS-RPG. You can explore Pandora which is filled with whacky enemies and characters in a split screen. Shooting feels crunchy and satisfying, there are more guns that you can handle or even know what to do with. Damage numbers and cartoonish style is unique, unlike anything in this genre full of multiplayer games. You’ll borderline regret not buying this you handsome fool.

Check out Borderlands: The Handsome Collection ($20.99)

Call of duty for stale and rote real quick until this reinvigorated the franchise with a good single player campaign that went back to its roots. You’ve got both online and local co-op to choose from like nazi zombie mode where you fight zombies in an alternate history. It’s a low key extra story mode which is awesome as Call of Duty games are mostly about campaigns anyway.

Its like football but with rocket-powered cars. You can jump kick as well as get a speed boost if you grab them like in racing games. It’s mostly based on dodging moves from other players and is physics based so lotta ragdoll type fun. It feels like playing ice hockey and basketball with its rules and mechanics. Psyonix breathed some fresh air into both games like FIFA and Gran Turismo. It a sleeper hit and a must play.

A cooking simulation game that really makes you co-operate as in communicating the order and be in harmony within the game, you need to cook together and serve up meals. The thrill comes from having to cook in precarious situations like cooking on a Hot Air Balloon that crashes into a sushi restaurant. You can toss ingredients across the kitchen which is kinda fun. A game where you’d just tense up in a way that’s hysterical especially if you don’t know how to cook.

FIFA has been the staple game for uni students and office professionals for the past decade or so. It’s got a story mode which isn’t too bad but the real fun is in its tried and tested two players mode played on the same screen. Improved graphics, New teams from premier leagues, and other goated teams are finally added. Gameplay has been tweaked to give more control to the player in both physics and character control. It feels more fluid and responsive than all the ones that came before as expected.

Not as gory as MK11 but it surprises with its story and roster of DC characters. It introduces a loot system to get your character decked out in new clothing or armor like an RPG. Batman steps up after Superman fails. Brainiacs and Society are new threats that our heroes have to deal with. Fighting games have been around for decades and it’s only gotten better with graphics and consoles like PS4. You’d be doing an injustice to yourself by not buying it.

MK XI a 2.5D fighting game that is big among the fighting niche because of its insane kills and Gratuitous Gore that is over the top. Netherrealm studios have introduced new and fresh Fatalities and Brutalities mechanics like Fatal Blows and Krushing Blows. Also, there’s a new mechanic names Flawless Block that lets you do a counter-attack after you block an attack within a given window. This gives the player to react and respond which is key to make any animation punchy and impactful. The one feature that I liked though is that you can create custom move-sets and add them to the characters. Cetrion, Gerras, Kollector are the new ones in the bunch. Familiar characters like Raiden are back.

Roguelikes were games that were popular in this niche genre until binding of Isaac became a massive hit and paved the way to the genre. You play as Isaac, who’s hiding from his mum in the basement. You use his tears to fight monsters made of poop and other sanitary stuff. Having another player certainly ups the room to room fights which culminate in a boss fight that is randomly generated. You’d be reborn as a gamer if you don’t play this.

A platformer that can stand shoulder to shoulder with games like Mario Galaxy or Super Mario. Each level in a world has new and interesting themes attached to it. Every world is unique and can be played in co-op. The kicker though is that you have to use all the mechanics you learned in a world at the end in one medley song type level. It’s the most fun you’ll have traversing a level. Like underwater stealth and digging through cakes.

Made by Alex Preston who was diagnosed with a heart condition, where he could die at any moment. He uses this opportunity to make a personal story that’s quite touching in a beautiful pixel art game that is as tough as nails. The amount of freedom it gives you to explore the map is quite reminiscent of the Zelda series, Breath of the wild. It’s kinda like a horde mode but probably the hardest one that you’ve ever faced. if you’ve got a heart, support this developer for his love of the craft.

A Metroidvania sequel that was built with the ps4 in mind. You play as Juan a Luchador, so you’ve got all the typical moves like punching, kicking and uppercuts which also acts as a jump. There are also optional challenges and rooms to gain new move-sets or powers. Co-op is even more satisfying when you do rooster uppercuts and see your mates fly up. The map is big and filled with different enemy types that’ll not get boring anytime soon.

It paved the way for more roguelike games that don’t borrow all the concepts. It feels authored yet has randomly generated caves as uses templates to create enemy placements and cave structure or loot placement strategically. The 2D art and progressively learning how to skill up is the most addictive part of Spelunky. It won many awards for its innovative design. It’s cheaper than actual spelunking so you’re better off buying this.

Read: Best Upcoming Games for PS4 in 2019 and beyond

If you’re a Blizzard fan you’ve probably played this if not this is probably one the best RPG games of all time. You can choose from one of 7 character classes. You can experiment and see what abilities and load outfits your style. Loot and run systems along with the randomly generated level, in particular, is unique and fresh. It’s predictable which gives games like these long legs or shelf life. Co-op is also really simple you just sign in and pick a character.

Even though it feels like a Blatant Soul rip0-ff, it sets itself apart with enough world building and 2D gameplay. It’s like the Hollow Knight of Metroidvania. Made by only two people, it’s astonishing to see the amount of content it provides for two people to play. Taking down bosses in co-op makes it a lot easier than it normally would. The extensive skill tree can be quite daunting but it will ease you into it. Don’t take my word with a grain of salt, just dive into this sanctuary, if you will.

Must Read: How to put a password on PS4

It blends two of the best genres in my opinion Bullet and Roguelikes where you shoot with one button and explore new and randomly generated levels. You can choose one of four characters and a fifth character will be the second player. You can find up to 300+ guns and rescue NPC for both lore and new weapons. The style, action, and sense of true to its world and characters. You need to enter this Gungeon community right away.

Announced in E3 and released the very same day, this sequel to the original platformer is a fantastic co-op game as it requires both layers to help each other and pay attention to the levels. An underrated game in the list as it was during the event and other AAA games overshadowed it. Puzzles are creative and give you that sense of achievement when it finally clicks in your brain. It has a gorgeous lifelike background while you play as the yarn in the forefront.

Towerfall is a 2D action game that kinda feels like smash bros. Essentially its party game, especially if you’re drinking.Its nothing like Celeste which is his successor. The horde mode type “ascension”  is probably the best as it has rising tension as you battle along with your buddies. It’s crazy good considering its an Indie title but feels like it was done by a AAA studio. If you dig deep you’ll find backstories and lore for the characters like Game of Thrones

Co-op play Has had the best run in the generation as most of them focused on MMO and loot boxes. I grew up playing games with couch co-op, which were fun because you get to share a screen with a mate. But it is not All is Lost as we did get games like a way out and unravel 2. We picked the best of them by playing them and playing them some more. Those were out 20 best local co-op games that we mustered up after three weeks. Let me know which ones you enjoyed the most with your buddy the most in the comments below.